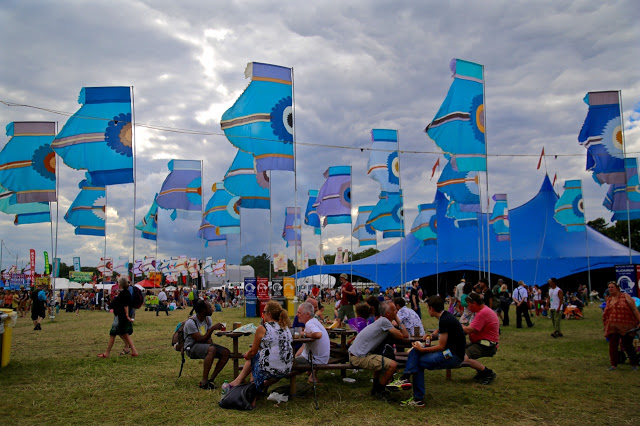 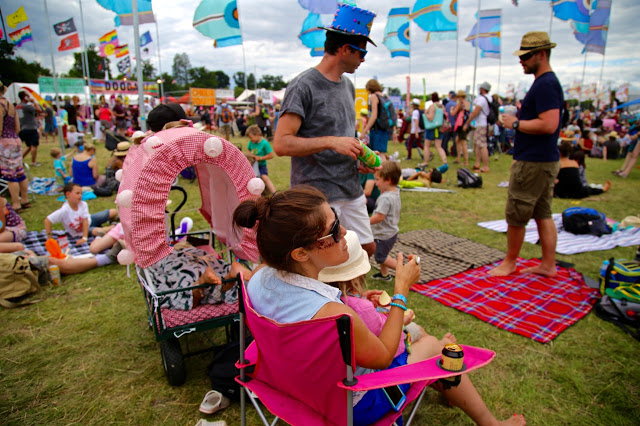 My inspiration for cooking comes from my travels around the world, for the memories that linger tend to be sounds, smells, flavours. So it was fitting to visit WOMAD Charlton Park, the world of music, arts and dance festival, now in its 34th year. This is my first year and while I wanted to try the selection of food stalls dotted around the festival, I was thrilled to discover the cooking stage where musicians shared typical recipes from their home countries. 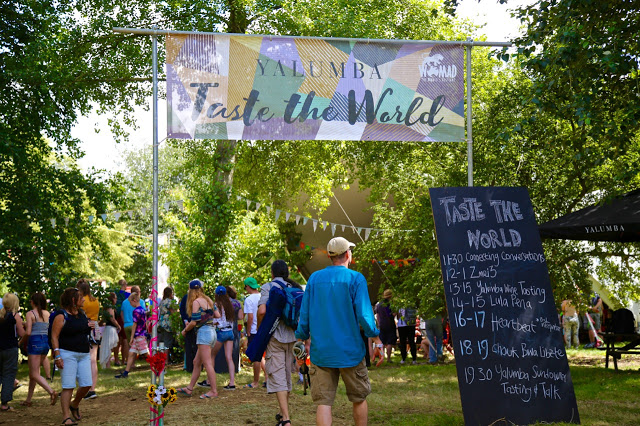 This section, Taste the World, is the creation of Annie Menter who I had a chance to interview backstage.

How many years has Taste the World been going on?

This is the tenth year. It’s music, food and conversation, what’s not to love about that? I’ve been working with Womad for 20 years. I’ve travelled a lot with musicians, food is important. The context. Every musician has a story to tell.

Have you got a background in food?

I was the Director of the Womad Foundation, the educational arm. This is where the idea for Taste the World came from- I was doing a tour of the states with Womad. Every time we stopped, there was a Chinese musician who would go to the phone book and look for not just a Chinese restaurant but food from his region. It’s often a lonely business touring. The artists want to stay somewhere they can cook for themselves.

They are so brave to do this, because none of them are professional cooks. Over the years we’ve had some remarkable performances. Food that is associated with a particular area, how did it get there, it isn’t from there originally, the trade routes… the whole journey really.

We had a wonderful performance with N’Faly Kouyate from Guinea who is a kora player. His mother had died a couple of years before. One of the questions from the audience was ‘Who taught you to cook?’or ‘What was your favourite dish as a child?’
He went very quiet then said ‘I haven’t talked about my mother since she died but actually this is a song she used to sing to me while she cooked.’ You could hear a pin drop. There have been so many moments like that.

When you know the line up, how do you recruit musicians to do a recipe?

Getting a recipe out of them is tricky. They are always stunned when they find out they have to cook it too. Often they don’t read the email properly (laughs). I get all the ingredients. We’ve had extraordinary requests, things like Bison meat.

Where did you find it?

I googled it and just here in the south west of England there are about about four bison farms. I mean I’ve never seen a bison in Somerset in my life, but there we are.

A Japanese root vegetable, which we couldn’t find here. They ended up bringing it from Japan; sometimes the musicians have to bring the ingredients with them. A Georgian choir cooked an amazing stew with dried plums and asked for herbs that I just couldn’t find so they brought them in a suitcase with them.

A Quebecois group said they’d make buckwheat pancakes but it was obvious once on stage they didn’t know how to cook. So the lead singer got his phone out, hi mom,  and asked his mum how to do it on stage. The audience loved it. The pancakes were dreadful, it didn’t matter, it was the whole story, it was so fun.

Do you ever get strange requests from musicians for their backstage riders?

On the whole they are pretty straight forward. They aren’t like rock n rollers. Fruits, nuts, snacks, juices, a little bit of wine. They are very reasonable at Womad.

Sometimes on my research and travels with musicians I’ve had to try unusual things such as giant African Land Snails in Nigeria, which were… very rubbery.

The highlight of the festival for me was when Romanian group Zmei3 demonstrated a baked polenta dish. The singer, an Olia Hercules lookalike called Paula Turcas, crooned soulfully while stirring the polenta. Paula said the Romanian philosphy about food could be boiled down to ‘shut up and swallow’.

1980s Roumania was like Europe hundred years before. I tasted a banana for the first time at 11 years old.
Our generation don’t cook. Our grandmothers made everything for us. They also made the clothes…

Paula spread out some linens that her grandmother made.

Although we were very poor, our produce was good. The plums! When you drink grappa you squash plums with the little glasses and say these are for the dead.

Romania is a Latin island in a Slavic sea. I come from Transylvania which is quite European but the south is more like Turkey.

The group shared some of the local firewater with the audience. Paula sang passionately while wiping tears of intense emotion from her eyes as she sang about her mother and her father who was the local priest. This stage, where audiences sit inches away from artists, is an intimate experience. 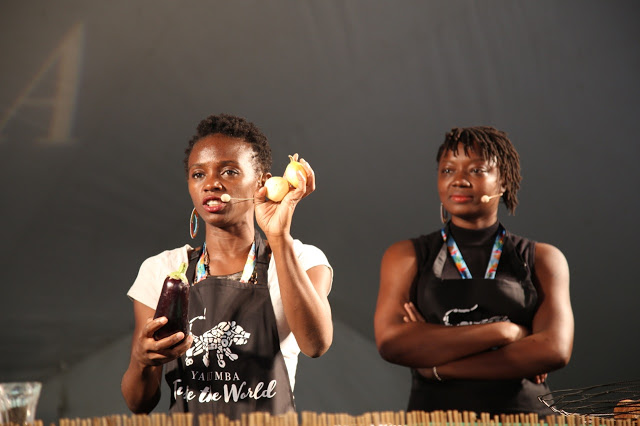 Les Amazones d’Afrique cooking a wild aubergine stew. They are an all female West African group, their winding inter-twining harmonies are incredible. 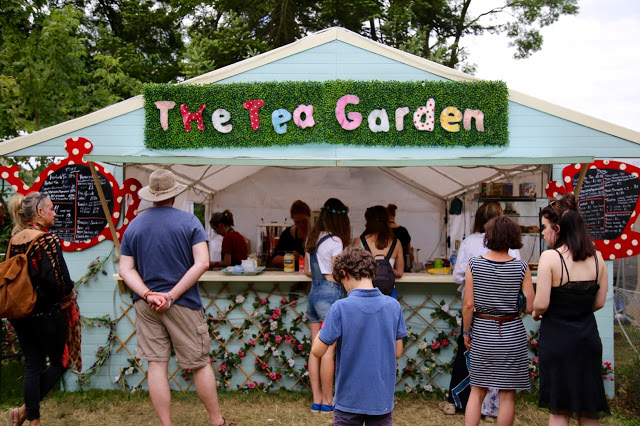 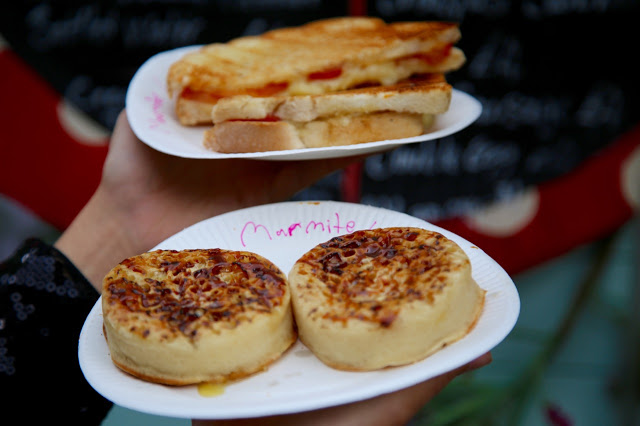 Festival food has become more expensive over the last couple of years, although it’s improved markedly from greasy fairground style burgers and hot dogs. You used to be able to get something substantial for a fiver but it is now more like £8. Stalls at Womad are 1,500 for the weekend so I suppose by the time they’ve paid for staff and transport, food stands need to make a couple of grand a day to make it worth their while. At Womad there was one very reasonable tent, The Tea Garden, where I got two heavily buttered Marmite crumpets for only £2. Naturally they had permanent 20 minute queues. 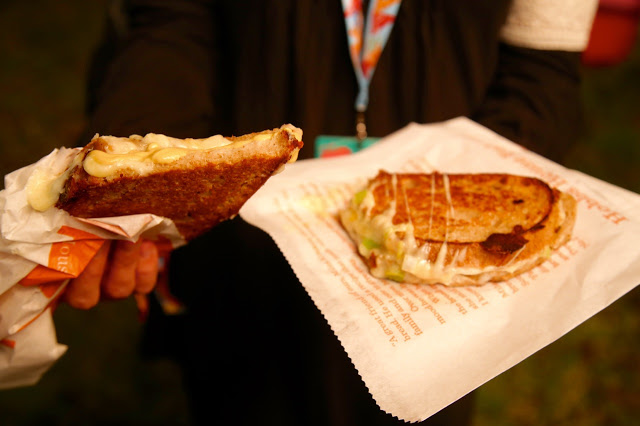 My second recommendation was the Cheese Toastie stall (which had a simple but effective frontage with the large words CHEESE TOASTIE in lights). For £5 you got a very large sourdough toasted cheese sandwich using great ingredients and which didn’t leave you hungry. 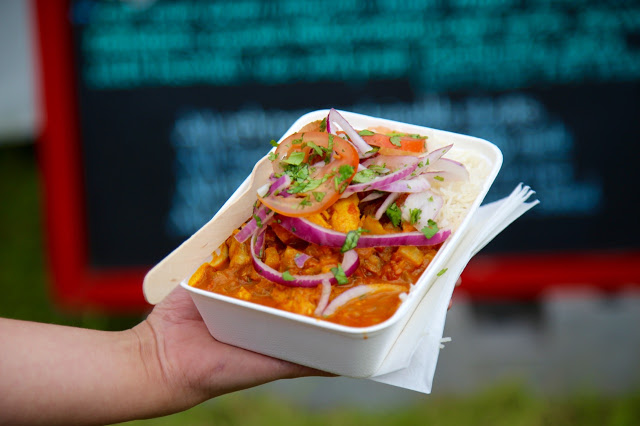 Everybody recommended the award winning Goan fish curry. It wasn’t bad at all but, like all the other curries at Womad, lacked salt and could have done with more spicing (Kashmiri chillies offer colour and mild spice). 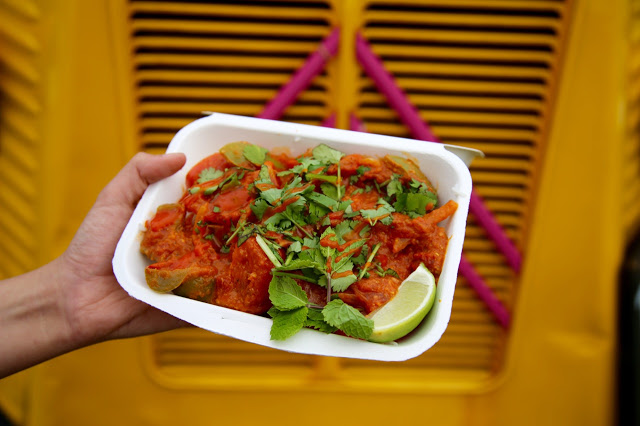 The tomato and pepper ‘Sri Lankan’ stew at Thai Angle was disappointing: undercooked with absolutely zero spicing. Clearly they’d applied the label Sri Lankan without any idea of what goes into the food. Perhaps their meat curries were better. 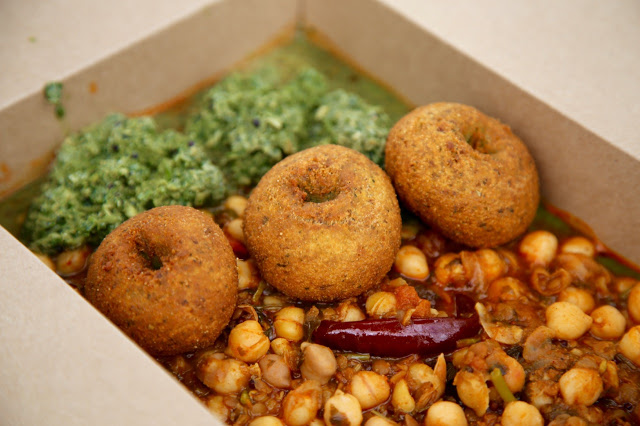 The chia seed vada, a kind of savoury Indian doughnut, sold at a health food stall were good but the curry, despite being very fresh with whole and ground spices, again seriously lacked salt. Thank god I am in the habit of carrying around a small tin of Maldon salt. 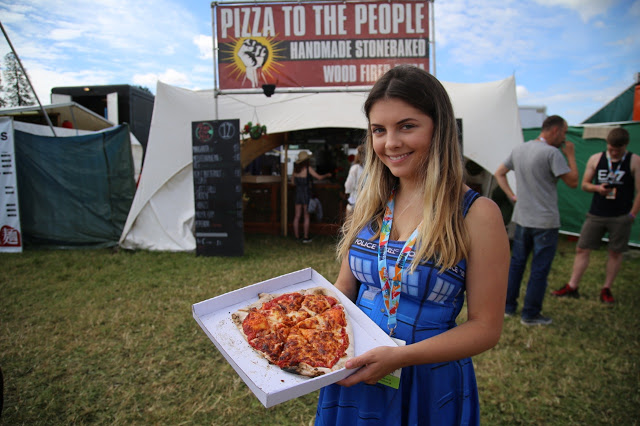 Wood fired pizza was fairly good at Pizza to the People, although again, better ingredients would have been nice. It needed salt in the dough, a drizzle of olive oil and a longer cooked sauce. Pizza costs so little to make and the mark up is high; spending a little more on ingredients won’t harm profit margins too badly.
Many food stalls had elaborate facings on their stands, something essential if you want to be seen from across a field while at the same time it adds to the style of a festival. 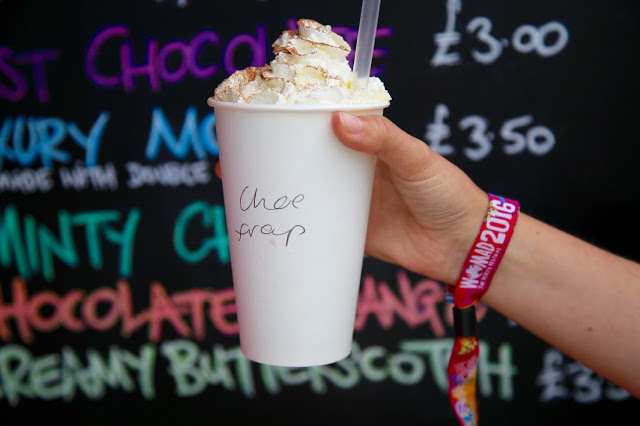 Chocolate frappaccino and reasonably priced cakes at a milkshake place. 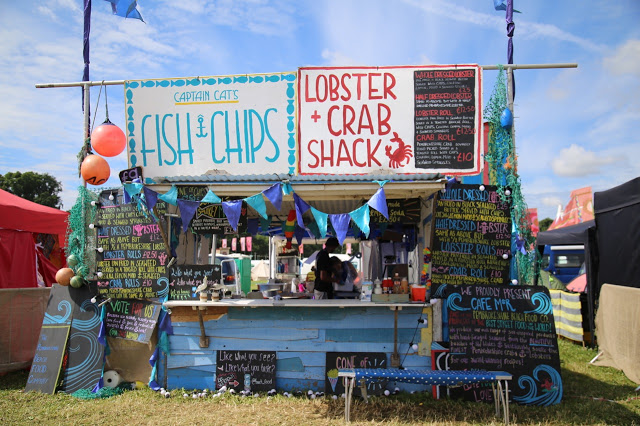 A distinct frontage is important when you want your food stall to be spotted from across a field. 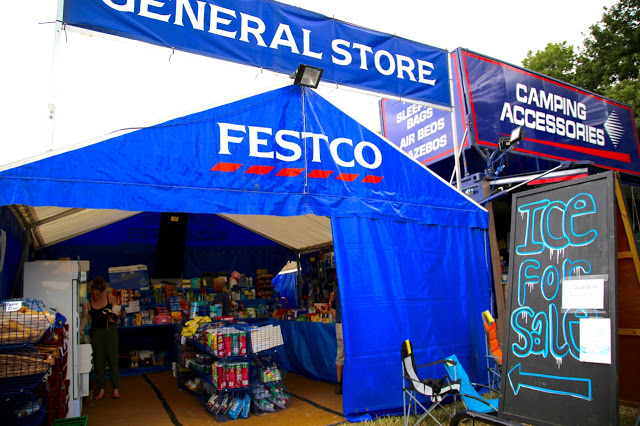 This place made me laugh. Tesco becomes Festco. 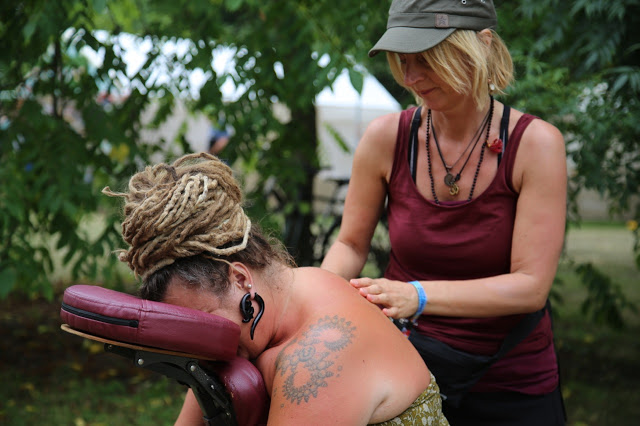 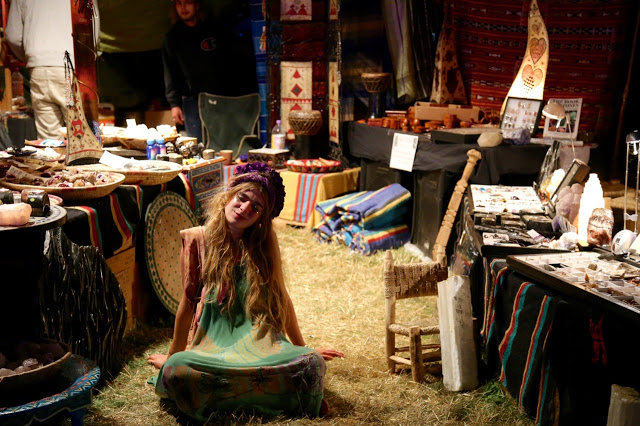 They have a good kids section at Womad. I spent years in the kids field as a single parent making things out of tissue paper and willow, copydex and mud. Craft replaces partying when you can’t get a moment off. Today’s festival children are wheeled about in charming little bowtop wagons. I used an actual wheelbarrow. 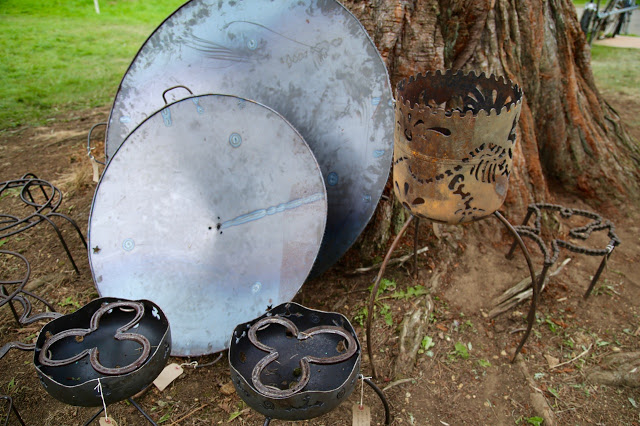 Trivets and fire woks for sale. 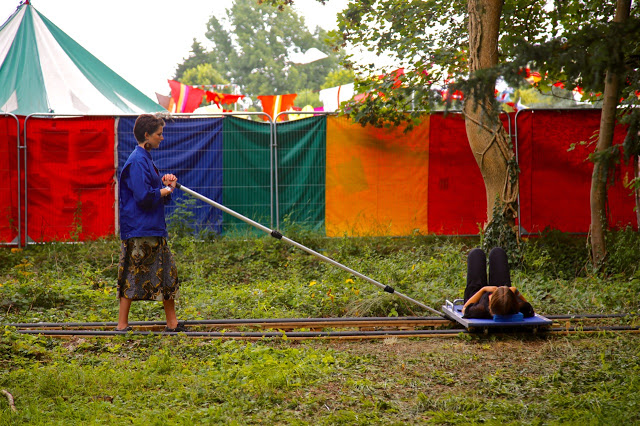 An installation: ‘Track’ by Graeme Miller