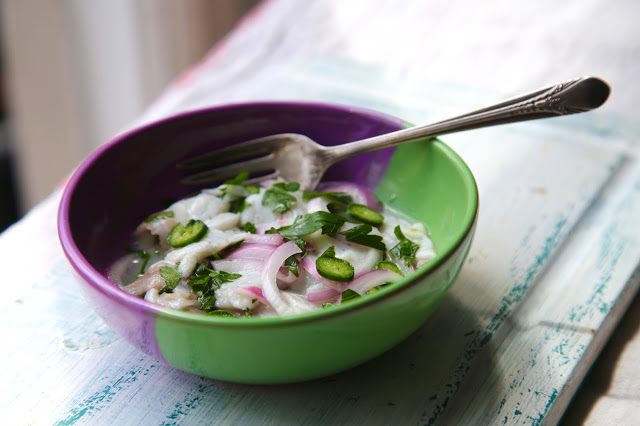 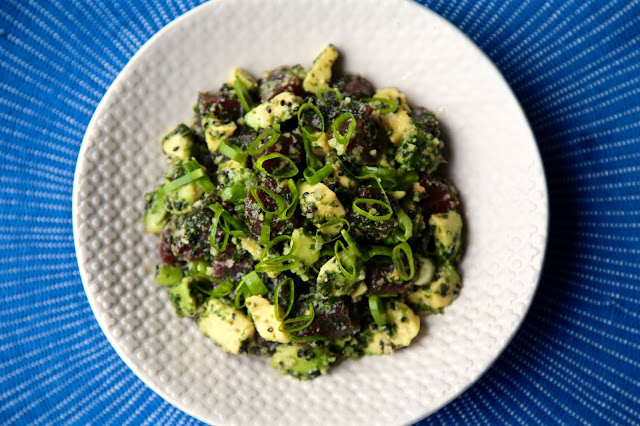 This week has been horrendous. In London, the air has been still with barely a breath of wind. The humidity has been oppressive. My menopausal hot sweats have taken on epic proportions. I can’t wear make-up because it slides off my face. My head has been pounding because it’s been high pressure or low pressure, or one of those. The one that gives you a headache.

My daughter went to the Tate gallery with her friend Tiger yesterday.

‘Mum, all I could see was older women fanning themselves.’
‘Were they middle aged?’
‘No, they were old. It lasts for decades,’ she said, commiserating. ‘Tiger said her mum is the same. Her mum’s been crying too.’

She’s referring to the meltdown last week when I sobbed, while giving her driving practice, from Camden to Cricklewood.

‘NOBODY LIKES ME. I HAVE NO FRIENDS. I HAVE NO WORK. I’M BROKE. I’M OLD. NO ONE FANCIES ME. MY LIFE IS SHIT. FROM HERE IT’S JUST DEATH.’

Dimly, through the blurry tears, I heard my daughter saying, while trying to negotiate traffic, the same stuff to me that I say to her along the lines of This Too Will Pass: “Nothing lasts forever, even pain and depression.”

But I’m glad I didn’t go on HRT because science. Even though just last year the powers that be said it was ok. FFS.

The last thing you want to do on a muggy summer’s day is to make your kitchen even warmer by cooking. The solution? Make a ‘no cook’ fish dish. Most cultures with a long coast line have some kind of raw fish dish. Examples include ceviche, gravad lax or poke.

You have probably heard of Peruvian ceviche, whereby raw fish is ‘cooked’ with lime juice, and the Scandinavian gravad lax, where raw fish is cured. The new trend to watch out for is Hawaiian ‘poke’, another raw fish delicacy.

You may wonder about food safety. Some fishmongers claim their fish is ‘sashimi grade’, but this is not a clear-cut standard. “There is no definition of ‘sashimi grade’ fish,” says Harry Toyoda of T&S Enterprises London Ltd who supply fish to Japanese shops and restaurants. “It’s a grey area.”

For any business to sell raw fish, British health and safety law requires it first to be flash frozen, a measure that kills parasites. But, Toyoda continues: “In Japan no sushi bar would use frozen fish. Freezing salmon is not too bad, but to freeze seabass is such a shame. It changes the quality and texture.”

The methods in these recipes of ‘cooking’ raw fish render it safe to eat, except for the poke. All fishmongers claim their fish is fresh so how do you know?  Develop a relationship with a good fishmonger and only buy from one you trust.
Supermarket fish is usually at least 10 days old. When I did a course at Billingsgate (fascinating and well worth it), I had to extract, with tweezers, at least 10 worms from a slab of fish. You know those white patches you sometimes see on pink salmon? Those are lice. Sorry to be yucky. So a good supplier is essential. 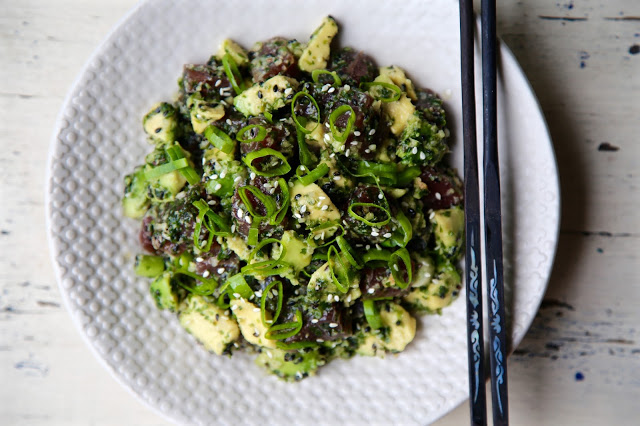 You can buy candlenuts from souschef.co.uk, but macadamias are a good substitute. Both nuts are buttery, oil rich and dense, to the point that the former can be burnt like candles (hence the name). Good tuna should be red, not brown.

Mix the marinade ingredients together, sesame seeds, nori, oil, soy and lime.
Then add the tuna, spring onions, avocado and candlenuts to the marinade. Toss and chill for half an hour. Eat with steamed sushi rice. 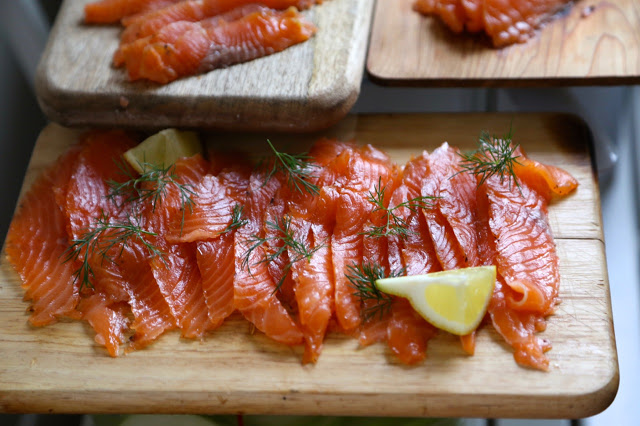 Mix together the sugar, salt, pepper, lemon zest and juniper berries.
To prevent overflow of the curing liquid into your fridge, use a non reactive baking tray with a lip (that also fits in your fridge).
Spread 1/4 of the sugar/salt mixture on the tray. Place one piece of the salmon, skin side down, on the tray and spread half of the mixture on top along with the dill. Then place the other salmon piece, skin side upwards, on top. Spread the rest of the sugar/salt mixture over the skin.
Pour on the Aquavit (or vodka or gin).
Weigh down the salmon with a chopping board or plate plus something heavy on top. Leave the salmon at room temperature until the salt and sugar dissolve then place it in the fridge. After 24 hours, remove the weights and flip over the salmon ‘sandwich’. Replace the weights and leave in the fridge for another 24 hours.
Remove from the fridge and cut a little slice from the centre of the salmon. Does it taste cured and not raw? Then it is ready. (If it is too salty, you can rinse the salmon.)
Cut D shape slices and serve with crisp bread and pickled cucumbers. 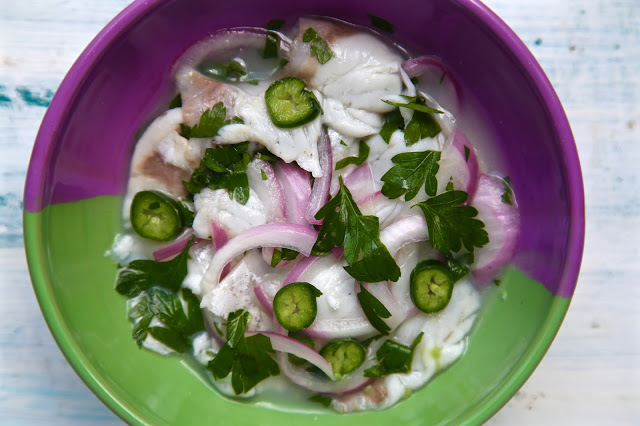 Authenticity points are gained if somehow you’ve managed to get hold of aji amarillo, a yellow Peruvian chilli pepper. You can buy the paste online, but any fresh chilli will work.

Mix all the ingredients together and let it marinate for around 30 minutes or until the translucent fish has turned white. When you’ve eaten the fish, don’t discard the juice at the end. This precious ‘tiger’s milk’ is wonderful mopped up with boiled then skinned cold sweet potatoes, as eaten in Peru. 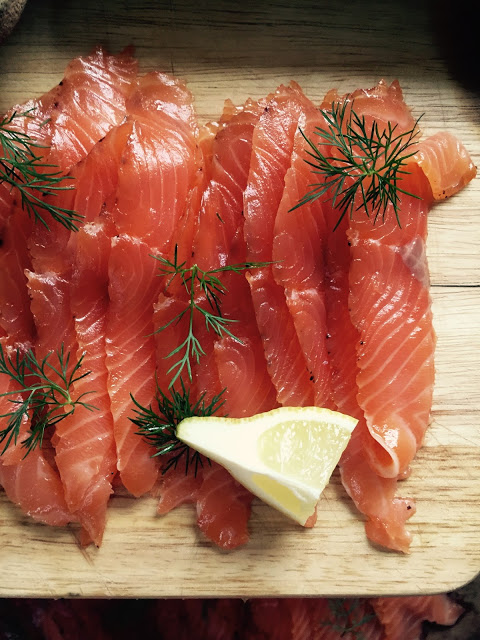 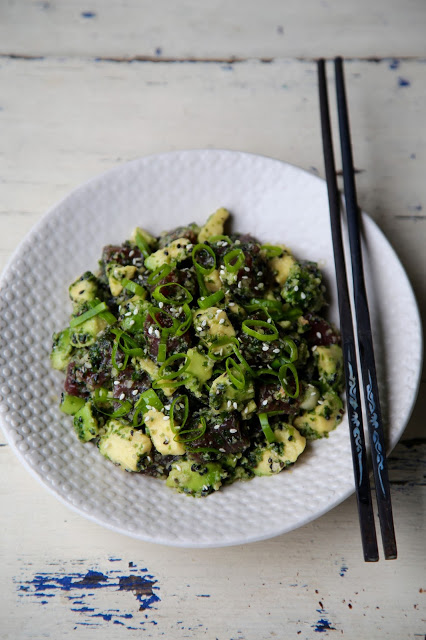