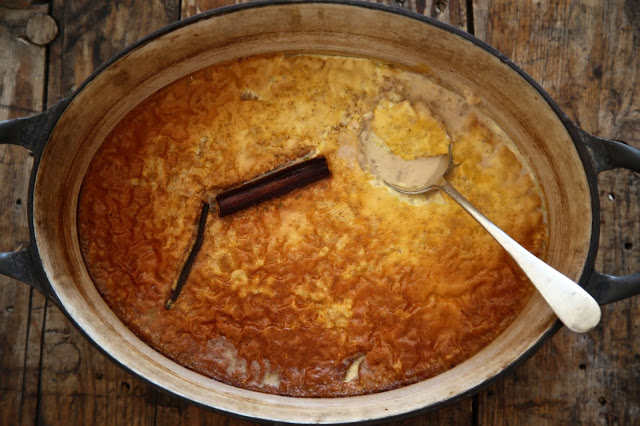 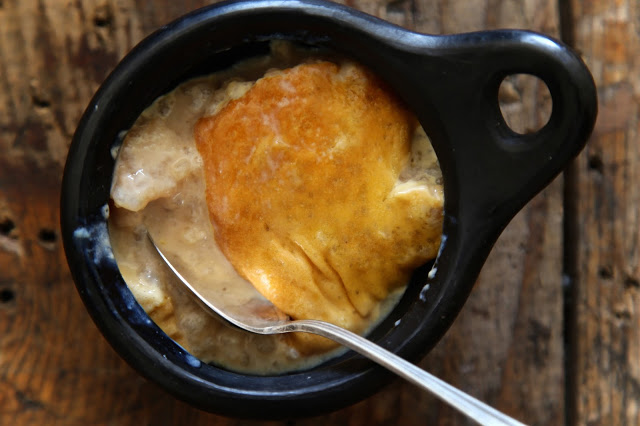 Spanish tapas became popular in London in the late 1980s and have been influential, arguably setting the trend for grazing small plates ever since.  People returned from France and Italy raving about the food, but this rarely happened after a trip to Spain. The tapas revolution changed all that and today Spanish restaurants feature on all the global ‘best of’ lists. I wrote about this movement, inextricably linked with the end of the Franco era, in a previous blog post. Chef/writer Greg Watts has published a book Olé! Olé! Passion on a plate, detailing the rise of Spanish cuisine in London. One of the pioneering characters he interviews is former teacher Monika Linton.
Linton founded Brindisa, the Spanish ingredient emporium in London. Her newly published book Brindisa, the true food of Spain, a massive tome of knowledge and recipes interspersed with superb information on Spanish ingredients, was sent to me this week. The chapter on paella rice describes it as:

“the Japonica type, which is plump and slightly opaque with a bright white concentration of starch in the centre of the grain”.

Towards the end of the book there is an Orange Rice Pudding recipe that jumped out at me which is something I’ve fancied cooking since I found an old pack of pudding rice while trying to use up ingredients in my dry pantry. This is a controversial dish, redolent of school dinners but I was one of the weird kids that actually liked rice pudding, tapioca and semolina.
The Brindisa recipe specified La Bomba rice, and suggests a massive proportion of milk to rice: 2.5 litres of liquid to only 100g of rice.
Following the recipe, I used my old pudding rice and a cinnamony bay leaf I brought back from Grenada. I added 75g of sugar, a stick of cinnamon, a vanilla stick and some orange peel.
They suggest cooking it for around two hours and adding the milk slowly bit by bit. Bollocks to that. I shoved all the ingredients in a Le Creuset dish that I found next to the bin outside. It’s my only one. Then I put the lid on and put it in the simmering oven of the Aga and forgot about it.
This morning I got it out. The rice had dissolved into a mystery starch. It wasn’t sweet enough and the orange peel gave it a slightly unpleasant underlying taste.

The next day I tested it again, this time with Spanish paella rice. Not La Bomba but better quality than the ole (very ole) pudding rice. I omitted the orange peel using only the zest as the pith is the bitter part. I added more sugar and less milk while leaving it in the bottom oven overnight.
And yes it’s perfect. The rice hasn’t fallen apart. There is no bitterness.

My version of Brindisa’s orange rice pudding or

Put all the ingredients into a lidded casserole and bung in the lowest Aga oven overnight. Remove in morning. Eat for breakfast or leave till later.

If, and it’s very likely, you don’t have an Aga, then put it in a low oven (140ºc) for approximately two hours or overnight at 100cº. You could also try it in a slow cooker.
This also makes a very good breakfast as an alternative to overnight oats.
This can be made vegan by replacing the cows milk with nut milk. 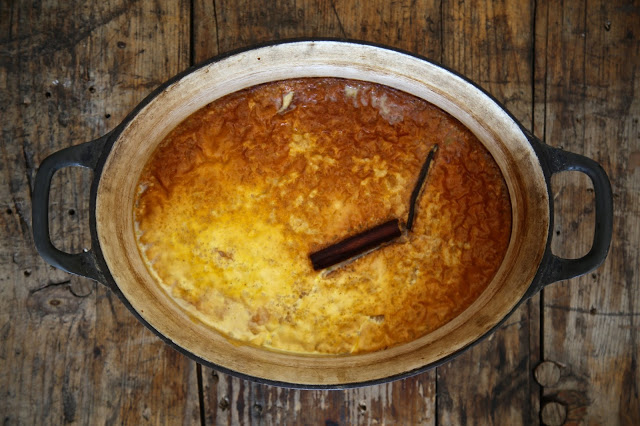