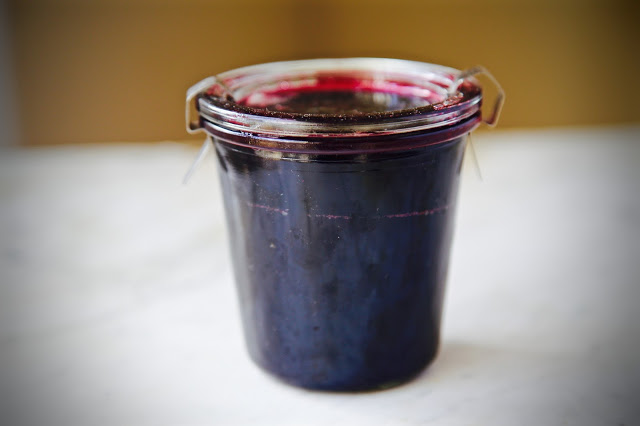 Preparing food from scratch is mostly a very slow process, especially when you have also grown it.  It runs counter to everything else in a society which wants stuff fast. It’s often not even cheaper.
I say ‘grown it’ but this part was effortless. You plant a grape vine in a hole in the soil in a sunny position and wait. This is the third year of the grape vine. I was lucky – it had grapes from the very first year. This year its arms have extended along my balcony while the trunk of the vine has drooped with the weight of green and purple grapes as if laden with gems.
The great thing about a vine is you can also use the leaves for wrapping food, making dolmades, barbequeing fish and halloumi, adding to home made pickles to make them crunchy. It’s a very useful plant.
This year I finally got my shit together to do something with the grapes. They are wine grapes with thicker skins and bigger pips, rather than table grapes, so you can’t really eat them straight.
What can you make with wine grapes? Wine? Don’t have enough, don’t have all the gear, it’s a bit of a pfaff. Maybe next year there will be Chateau Kilburn.

I did two recipes: one which required me to hand squeeze the juice out of every sodding grape. This took five hours. Added onto the hours I’d already spent: killing the woodlice hiding within the bunches, removing each grape from each bunch, plucking the bitter stems from each grape.
I tolerated this by turning it into a Netflix sesh. I watched the Gilmore Girls (themed supper club coming up) with my daughter. I even got her to help which made the pile go down more quickly. It’s amazing quite how enjoyable, productive, fast and companionable mindless prepping tasks can be.
So we squeezed the juice from each grape into a bowl, keeping the skins in a dank separate pile in another bowl. The grape squeezing possessed the rewarding satisfaction you get from popping bubble wrap, but five hours is a long time to pop bubble wrap.
I boiled the pale green juice for five minutes and strained out all the pips. I added the skins which turned the concoction a deep purple and brought it up to a boil once more. I strained out the skins and left a bruise coloured sieve to drip the juice overnight. The next morning I added sugar, pectin and kept it on a rolling boil until I could see thick drops hanging from the edge of the spoon when lifted from the jam.
But I had lots more grapes and I couldn’t face the hand squeezing again.
My second attempt I tried a short cut. I cleaned the grapes, removed all the green tendrils and vines and dumped the lot in a large copper jamming pan. I boiled for an hour or so until the grapes looked soft and mushy. Every so often I’d deflate bloated grapes with a spoon.
Then I poured the pan, bit by bit, into a cheesecloth lined sieve over a pan. I left it overnight again, covering the squashed grapes in the sieve with a cloth so as not to attract fruit flies.
The next day I squeezed the cheesecloth to remove the last juices and set the copper pan on a rolling boil again, adding sugar and pectin.
After around an hour it was ready, I’d reached ‘setting point’. I’d already sterilised the jars in the oven and funnelled the hot jelly into them.
The second technique was less time consuming than the first but both worked well.
Grape jelly has an appealingly tart flavour. Even though I’m not a jam person, the glossy claret spread thick on warm bread with yellow butter for breakfast was pretty good.
I do like doing things slowly. It might seem stupid to spend an entire weekend making five pots of jam when I could go out and buy them. But there is a deep satisfaction in using the produce from my garden to make something delicious, without preservatives. I’ve given a jar to my hairdresser and I’ll save one for my mum. Who is a jam person. 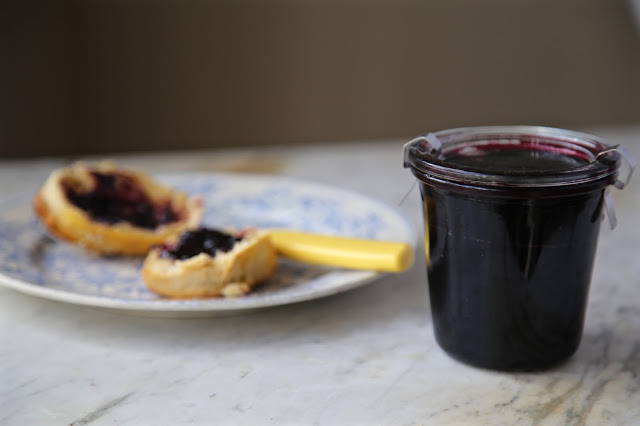 Prep the grapes.
Put in a large pan and boil until squidgy, helping it along with a spoon.
Strain into a cheesecloth lined sieve over a large pan.
Put the strained juice back into the first large pan.
Add the sugar and pectin.
Keep on a rolling boil on a medium high heat for around 45 mins to an hour.
The jelly will reach setting point. This can be ascertained by checking the drops from the edge of the spoon, they should be slow, thick and non drippy. Or use a cold saucer (I always keep one in the freezer), pour a little on and if you can push it with your finger and it forms a wrinkle, it’s done.
Wash the jam jars very well then put them in a low oven for half an hour to sterilise. Use new lids if using screw top jars.
Remove the jars when the jelly is ready and pour it in. 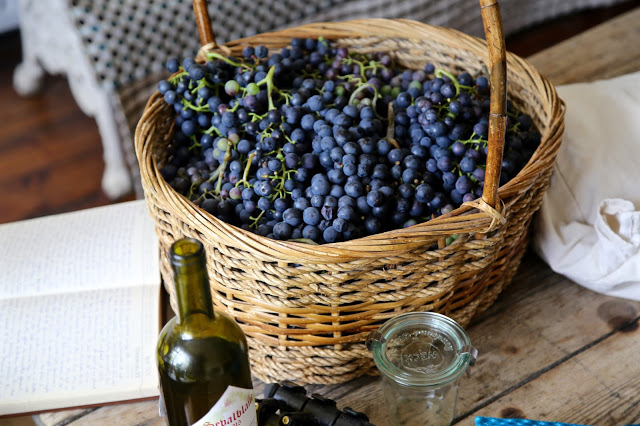