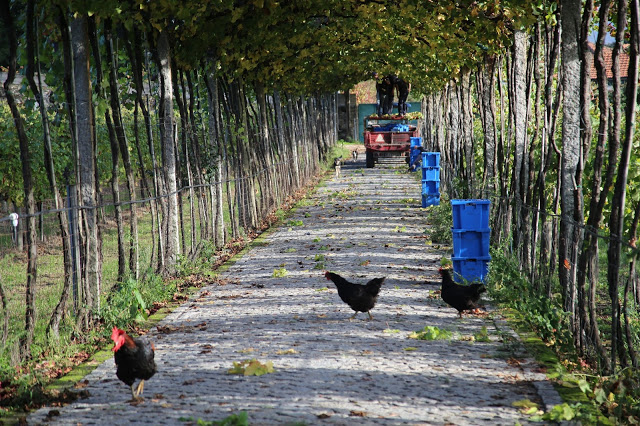 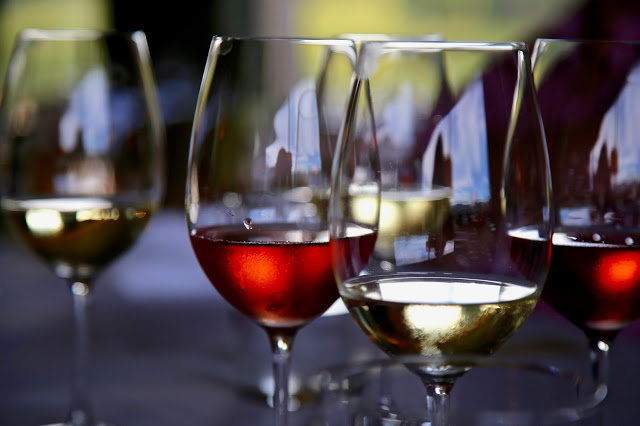 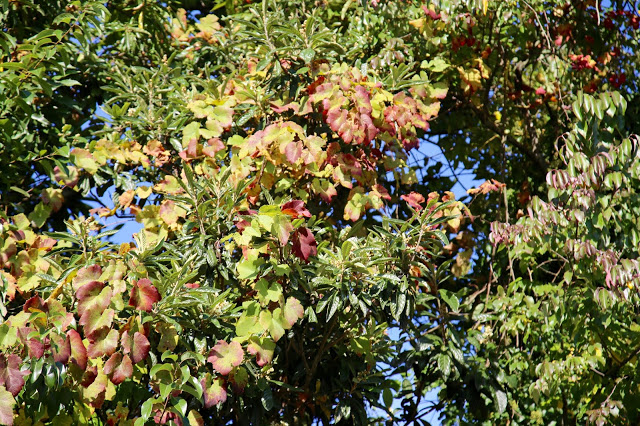 I first tasted vinho verde wine when visiting Lisbon. I recall teetering in a tiny wooden straw-bottomed chair at a 45 degree angle at a table for two on a steep hilly pavement outside a hole in the wall restaurant. We had grilled sardines with fresh mint, yellow waxy potatoes and a carafe of bracing, fresh, young white wine. Situational drinking at its best.

So I was thrilled to be invited on a press trip to the vinho verde region in the northernmost part of Portugal. It also gave me another chance to visit Porto, which so impressed me earlier this summer.

Vinho verde is directly translated as ‘green wine’. It’s drunk young: after the harvest in September, it’ll be in the shops by February, a mere six months later. I suppose it’s a little bit the Beaujolais Nouveau of Portugal. It perfectly complements the food: the grassy olive oil, the fish, octopus and shellfish, the hearty regional cooking.

On this journey we ate at a variety of places, from local favourites to Michelin-starred hotel restaurants. We visited numerous wineries, from grand houses to small vineyards.

I discovered that I’m a fan of the Alvarinho grape, which is the Portuguese version of the Spanish Albarino, just over the border in Galicia. Vinho verde is usually a white wine, with a slightly acidic, fruity, sparkle but it also comes in red and rosé. The grapes used for white vinho verde are Loureiro, Arinto, Trajadura, Avesso, and Azal.

The red wine grapes are the Vinhão, Borraçal and Amaral. The vinhao grape is particularly noteworthy because it’s one of two grapes that actually produce a dark purple liquid. Most grape juice is colourless and the red colour is created by the skins.

The north of Portugal has always been poor so the resourceful landowners used to grow their vines up trees rather than in vineyards. In this way, they could make use of the ground beneath the vines for growing other crops. However harvesting was rather hazardous on ladders. Today the wines are grown in traditional style vineyards although you can still see places where vines grown on trees as above.

Vinho verde goes well with sushi, fish, spicy foods. The Portuguese are obsessed with bacalhao, salt cod, for which they have 500 recipes. Strangely they never eat fresh cod. Salt cod today is mostly obtained from Norway.

Portugal does have some vegetarian food, such as tempura. We think of this as a Japanese speciality but it was taught to them in the 16th century by Portuguese merchants. Green beans are dipped in wheat flour, sparkling water, then deep fried and served with olive oil and lemon.

Vinho verde is very on trend in the USA, where it matches perfectly with light Californian-style cuisine. 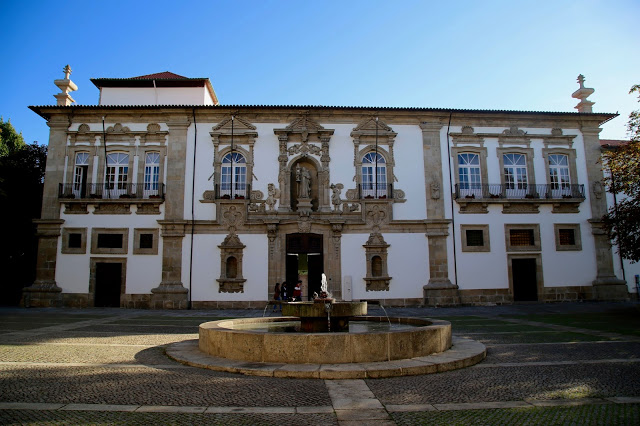 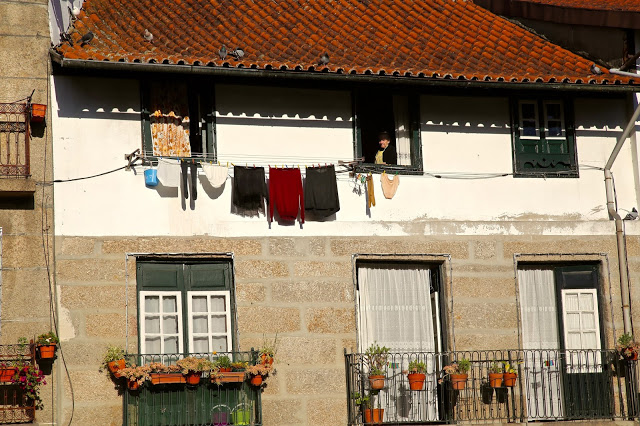 We toured the historic northern Portuguese town of Guimaraes, the founding city of Portugal, where the first king of Portugal was born. Similar to Bordeaux, this place has been refurbished and cleaned. Many buildings are tiled on the outside, a sign of wealth. Medieval squares that were used as parking lots have been pedestrianised.

A laudable approach to town planning was taken, which isn’t usually done with gentrification: the same mixed population, working, middle and upper class, was retained. They didn’t force all the poorer people out to the suburbs. The houses were repaired and the same residents were moved back in. Hence you see washing hanging out of windows over historic buildings. This gives it authenticity and a touch of reality that some places, newly Disneyfied, don’t have. 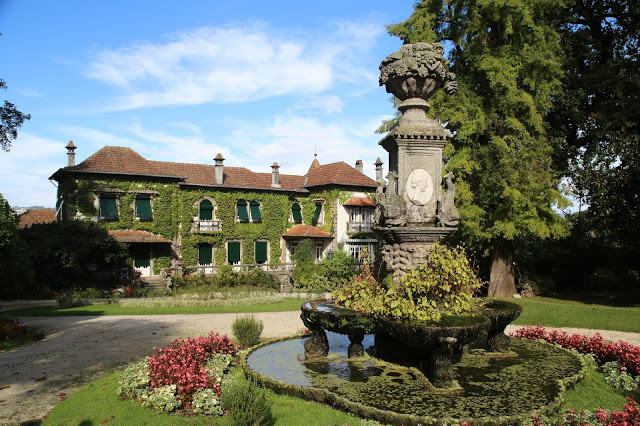 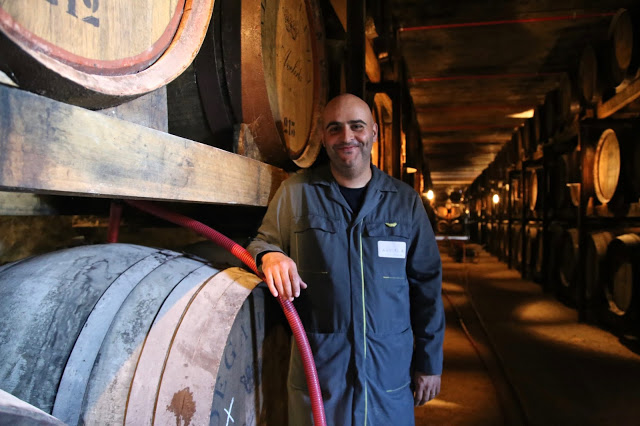 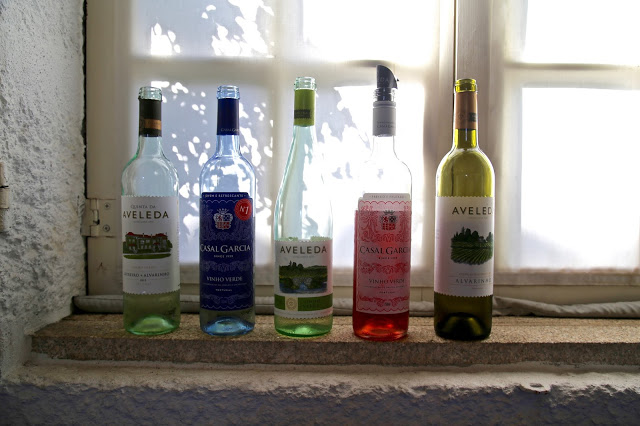 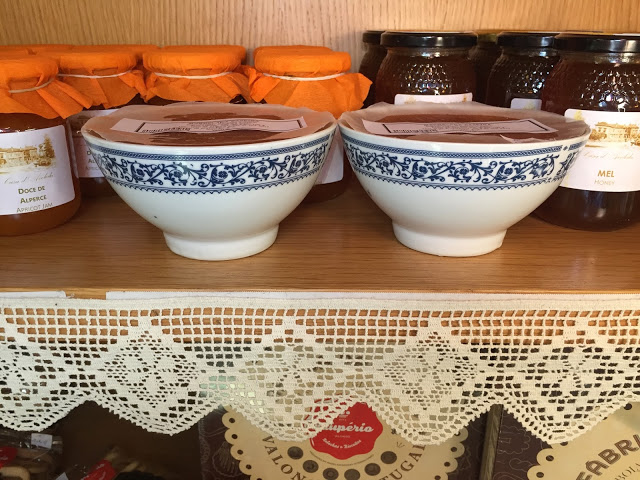 Casal Garcia is the largest vinho verde producer. They buy in many of the grapes from small farmers in Northern Portugal. The grand house above is used almost as a time share by the huge family who reserve a week or two a year. Portuguese inheritance laws are similar to those of the French: there can be hundreds of inheritors, all with equal shares.

They have a nice gift shop selling mermelada, which – be warned – is actually quince jelly. 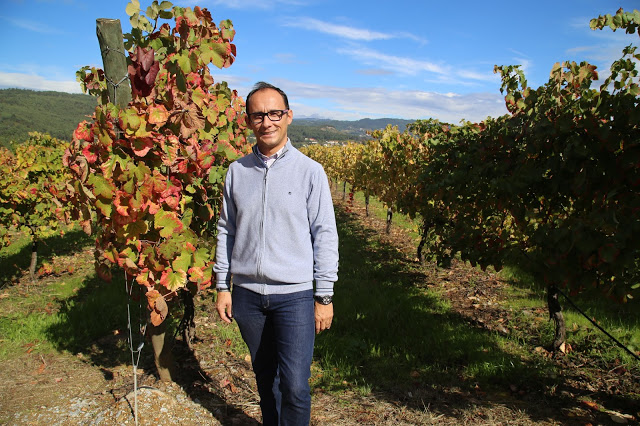 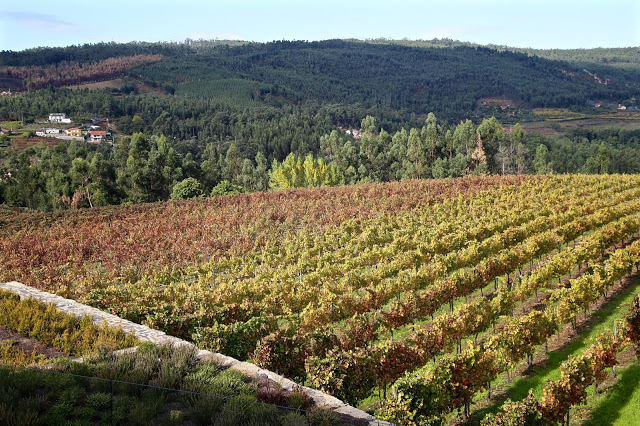 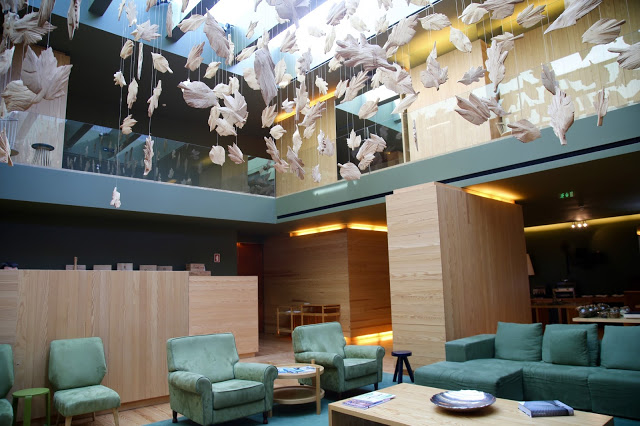 This vineyard, owned by the Meireles family, has a wine hotel attached called Monverde. It is worth visiting, designed by architect Fernando Castro Coelho with an installation by sculptor Paulo Neves, which suspends 365 wooden vine leaves from the ceiling. You can see the height of the vines (vinhao) compared to the height of the winemaker Carlos Teixeira above. Yields are quite low, 2.5k plants per hectare, compared to say Bordeaux where you have 6k plants per hectare. The plants are are quite far apart with a gap of 2.5 metres, while the lines are 2.8 metres apart. 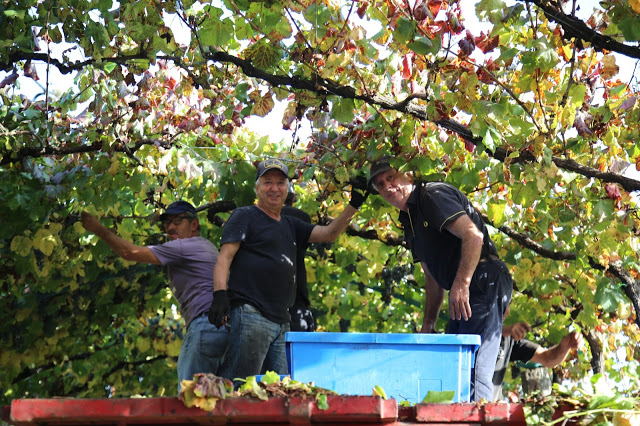 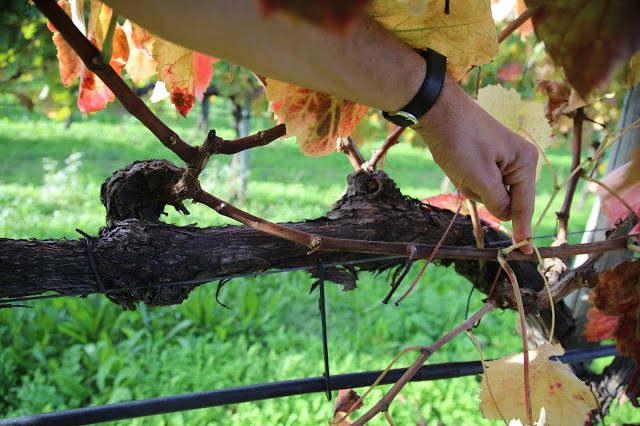 We arrived just as they were picking, from the top of a truck, the grapes from the pergola overhead. Chickens and ducks ran around the vineyards. I stuffed a bag of inky walnuts in their skins from a fresh windfall. Physalis fruit grow like weeds in Portugal. We were met here by the marketing manager (in fact we met fewer winemakers and owners on this trip because many of them do not speak English). He showed me how to prune the vines; count four buds from the spur and cut. They produce several monovarietal (single grape) wines of high quality. The alvarinho is citrussy, honeyed and floral. The loureiro was dry, mineral and acidic.

Lunch with the winemaker at a local restaurant tasting his citrussy 100% Loureiro wine was pleasant until he mistakenly offered me a plate of croquettes with ham inside. When I go on press trips I usually state: no meat, no shellfish, no beetroot. But I forgot something. I was presented with a roasted leg with suckers.

Ugh, I’m not eating that.
Why? You eat fish!
That’s not a fish. I state. (I wonder, is it?)
Yes, it’s a fish.
I’m sorry, in future I will state no cephalopods.
Why don’t you eat them?
They are intelligent.

Cue confused and hurt look on the face of my hostess. They simply couldn’t understand it. Octopi also have an alien gene. So when Earth is invaded by ETs I’m going to be just fine with our alien overlords. You lot, however, will be in big trouble. 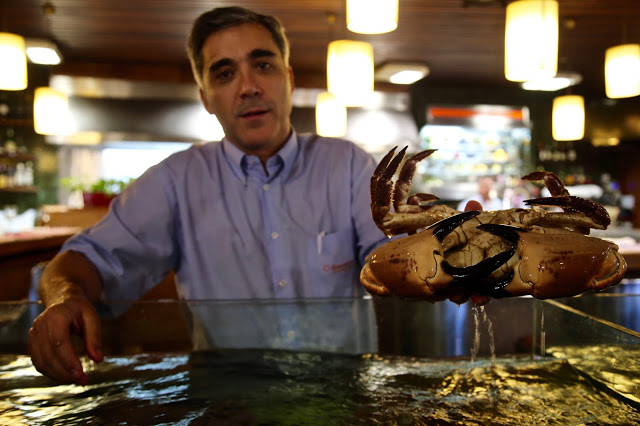 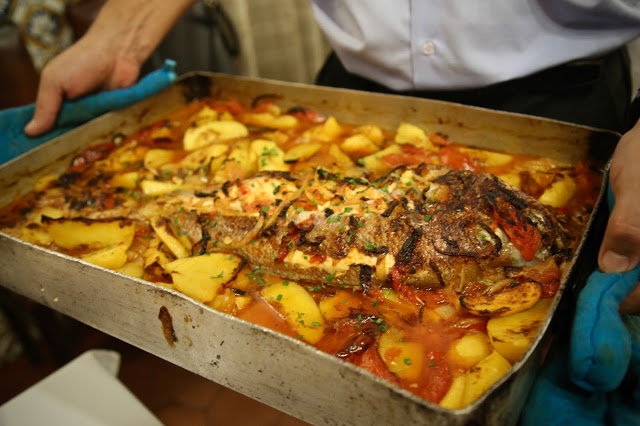 I had dinner in one of Porto’s most famous restaurants, O Gaveto, with the winemakers from Anselmo Mendes, one of the leading vinho verde makers. Together with fantastic food, such as the roasted whole fish with tomatoes and potatoes above, these were some of the most complex and rich wines that I tasted during the trip. 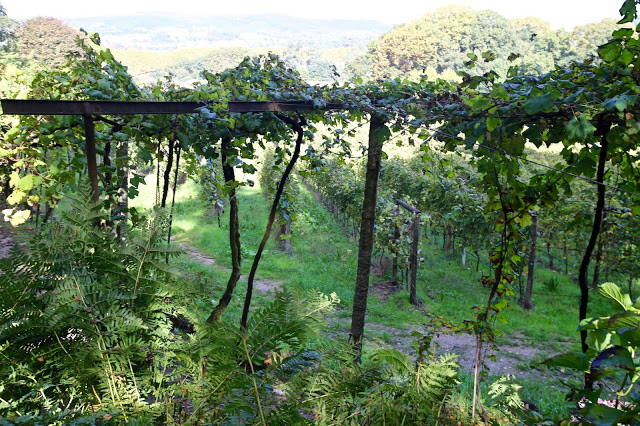