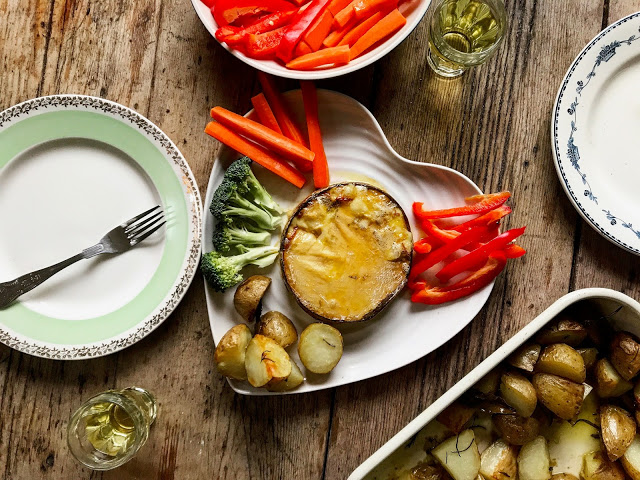 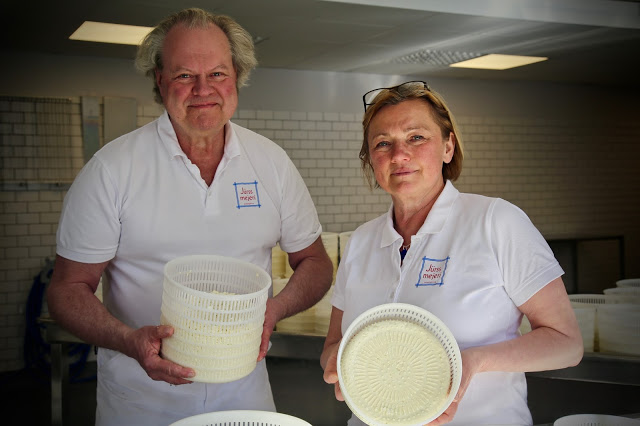 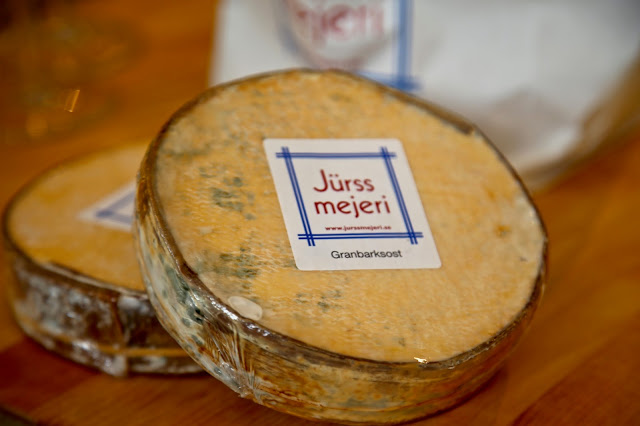 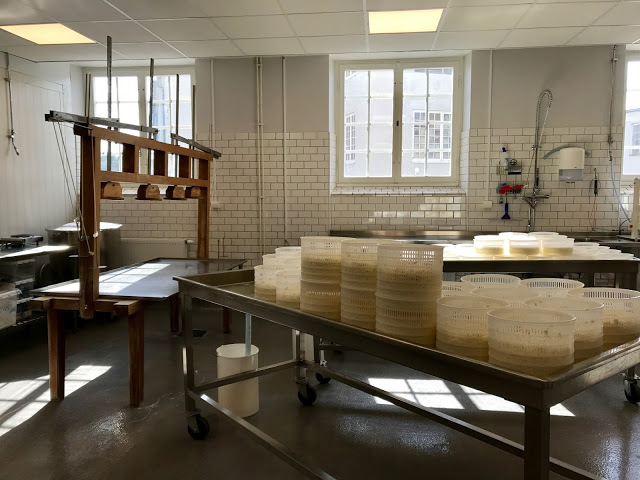 One of the treats in store for guests of next week’s Swedish Midsummer Supper Club is the bark cheese granbarksost from Jurss Mejeri dairy.
Chef Linn Soderstrom and I drove to visit them, a couple of hours west from Stockholm. I met Kerstin Jurss the cheesemaker and her husband Claes. Kerstin is pronounced ‘Sherstin’ in Swedish. Whenever I visit Sweden, people gabble away to me in Swedish if they see my name, assuming I am Swedish too.
(I’m actually learning Swedish, a daily lesson on an app. It’s time I properly assumed my inner Viking. As I mentioned in a previous post, I did a past life regression and I was a Viking in a previous life.)
Kerstin and Claes started in a dairy in Jamtland, in North West Sweden, both making and teaching others how to make artisanal cheese. Last year they moved to Hälleforsnäs, a couple of hours west of Stockholm.
Cheesemaking in Scandinavia is reverting back to the pre-war situation of multiple regional and family farm cheeses. In the 1950s, Swedish food was influenced by the large scale Agribusiness model from the States. Arla, the multi-national, bought up all the small dairies.

‘We bought that attitude. We thought that was the shits’ explained Kerstin ruefully.

Industries that had been going for centuries was taken over and turned into conglomerates.

‘It destroyed our cheese industry. So many cheeses were lost.’

Do you have your own cows?

‘In Southern Sweden we have cows. In the North it is goats. Very few sheep. We buy from organic local farmers and from Arla. The milk comes unmixed from three possible farms but we always know which one it is. So we have traceability.

‘We have milk that has been stored at the farm before it comes here. So we choose to pasteurise for safety. The milk is from Holstein and Swedish RB.’

Kerstin gives Linn and I a tour around the dairy. It is scrupulously clean. You could eat your dinner from the floor. We wear shoe covers as we are wearing street shoes. We are asked to don lab coats and hair coverings.

‘We have around 20 cheeses, lots of varieties. We use both goat and cow milk. We want to show different varieties for the teaching courses.’ 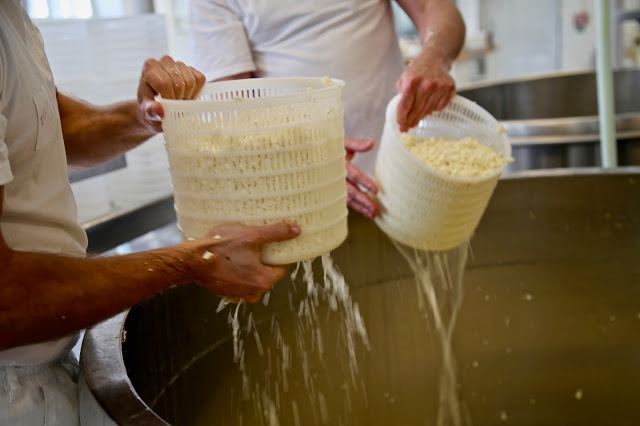 What is your favourite part of the cheese making process?

‘When you start transforming the milk, cutting the curds. It’s really really lovely.’

You are still thrilled by that?

‘Yes, and when you start touching the curds to see if it’s firm enough. Milk contains 87% water. When you make cheese, you need 10 litres of milk for 1 kilo of cheese.’

‘Yes, it’s a way of taking care of excess milk.’

Kerstin points to the curds:

‘This cheese will change completely during maturation. We will salt it quite heavily. The blue mould contributes to the taste a lot. We mature it for some time.’

The characteristic cheese of Sweden, I suggest, is quite mild, Edam-like, in slices.

‘That would be our hard pressed cheese. Sweden doesn’t export much cheese. We have problems with the opposite, we import, which is not so good.’

Vasterbotten did a big campaign. It’s an amazing cheese, the most northerly in the world, near the Arctic circle, I say.

‘It has an unusual texture: fine small holes, irregular. A bit like a Swiss cheese but much smaller holes. Swiss cheese holes are formed by gas, they are regular and round. In Vasterbotten the holes are made in a special way. The curd is firm enough that when you put it in the moulds, the curds will not melt together. It’s a typical Scandinavian/Swedish Northern type of tradition.’

‘Every village used to have its own cheese, Jurss Mejeri is the only company left from that time.’

In Sweden do you eat a lot of cheese? I ask.

‘We are one of the most of those who eat the most cheese in Europe.’

Swedes eat cheese for breakfast: eating on average 19.8 kilos a year. Here in the UK we only eat 11.6 kilos a year compared to France’s whopping 25.9 kilos. 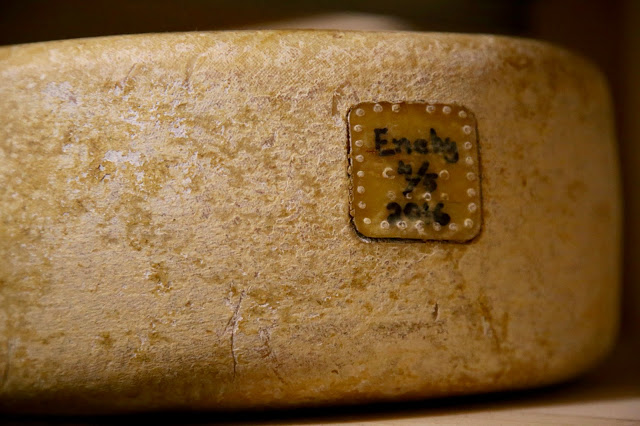 We enter a selection storage rooms, all fairly cold in temperature. Different kinds of cheese are stored in different rooms, to prevent bacteria crossing over from one cheese to another. The yellow, magnolia and white disks roost on wooden shelves.

‘Wood absorbs some of the bacteria. That’s why we use them, they help the cheese. They breathe, and conserve humidity.’

In another storeroom we see large cheeses covered in blue wax. Very Swedish, yellow and blue.

‘But there are tiny splits in the wax.’ Kerstin explains. ‘We dip them in food-grade hot wax by hand. It has to be done quickly so as not to melt the cheese. When you have an industrial cheese factory, if the wax splits, you just redo them. But we are thinking about other types of covering. Now we use a food grade plastic and wax mixture that you paint on. There is not so much paraffin, it’s more elastic so it is not completely stopping the cheese from breathing. So it continues to mature. This technique is more like before in England, when they used pig fat on cheddar. Pig fat lets the cheese breathe’ 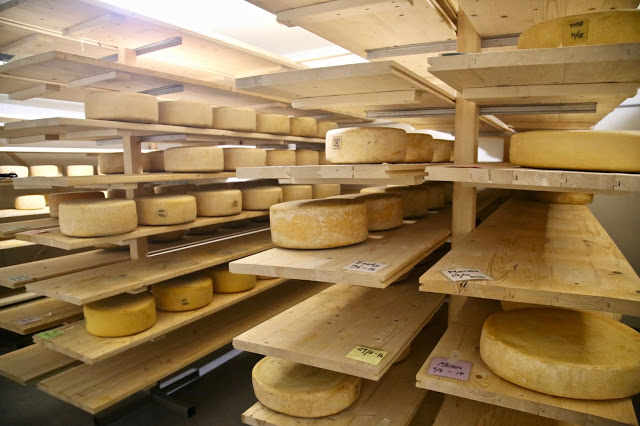 There are good moulds and bad moulds.

How can you tell the difference between mould and blue mould?

‘It’s not the mould itself. It’s whether the mould produces toxins or not. Bad moulds produce toxins, mainly only on carbohydrates. Bread and jam for instance has bad mould. Cheese is fat and protein. In milk you have sugar, that sugar is consumed by lactic acid bacteria, they consume the lactosis, they eat sugar and reject acid.  So you have a transformation from sugar to acid. In cheese you can find very small amounts of sugar.
‘Cheese had little capacity of producing toxins and especially if kept under 14 degrees, mould has little possibility of growing. The mould on jam and bread is more harmful.’

In the old days people cut off the mouldy bit. I interject.

‘When it comes to cheese it’s safe to do that. With cheese you can scrape off the mould plus one centimetre, then eat the rest. ‘

That’s good to know, because cheese is expensive and you don’t want to waste it.

‘But if the cheese is completely covered in mould, it changes the taste. If you have a layer of jam, it has mould, chuck the whole thing. Mouldy bread is not good. Do not eat mouldy bread.’

‘A lot of people, if one slice is bad, they eat the rest.’

We move to a room with a salt water bath.

‘Most of our cheeses are salted by hand in the salt water bath. Except the blue. When we salt the blue, we put salt in a big bowl and dip it in the salt. We make an even layer of salt around the cheese. The salt is important because it affects the enzymes, adds to the taste, preserves and helps the cheese to drain. In the old days, salt was expensive, so they made cheese without salt. So if you get an unsalted cheese, it doesn’t taste like cheese as we know it.’

In another room we see a large stainless steel tank.

‘This is the cooling tank for keeping milk; it takes 2000 litres which we split over two days of production.  We make 20 tonnes of cheese a year, but we are still very small.’ 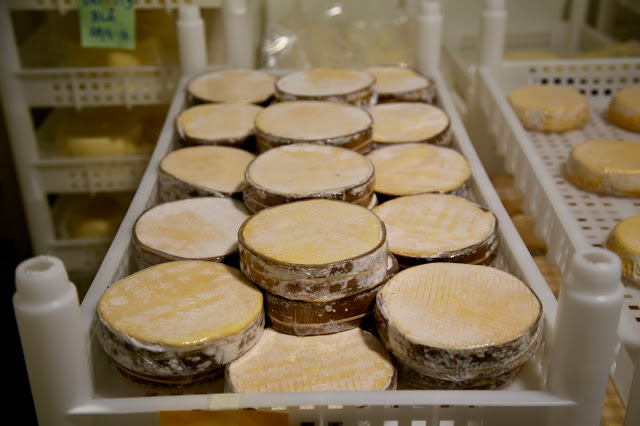 Why have you made this bark cheese?

‘We saw production of a bark cheese in France while travelling. They put it in a little wooden box, and sell it like that. It’s called Vacherin. The bark is around it. We’ve been trying to invent our own variety. Theirs is a little bit softer.’

What kind of bark are you using?

‘Spruce bark, which has a double bark and we are using the inner bark. The bark acts as a mould, which you need because when you put it in the oven, it melts.’

What is it called?

You’ve got a lot of spruce trees around here?

‘We do but we buy this bark from a French company. We spoke to a Swedish forest company here, but when they realised how much work it was to prepare it, you cut it into pieces, and dry it, they backed off. You prepare the bark by boiling it so it’s soft. If you start from the middle and go out, you can taste the bark.

Spruce flavour is a little bit like pine? We associate pine with floor cleaner.

Later, on my return to the UK, I prepare it as a meal, dipping raw vegetables in the gooey cheese. It’s delicious. 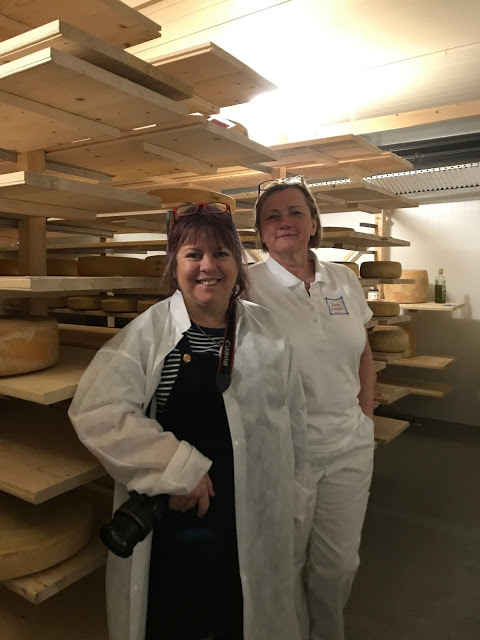 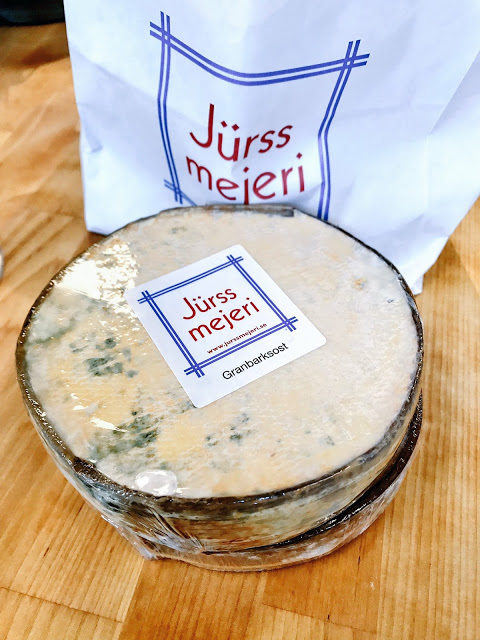 Previous Post: « Election Day at The Underground Restaurant plus recipe for election day samosas
Next Post: Pictures from the Swedish midsummer Supper Club »