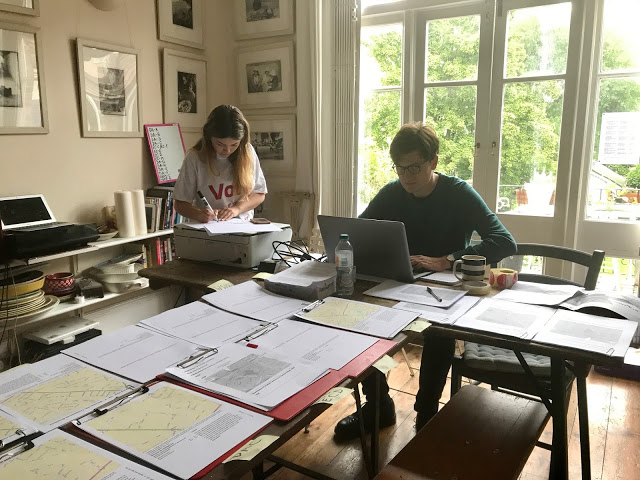 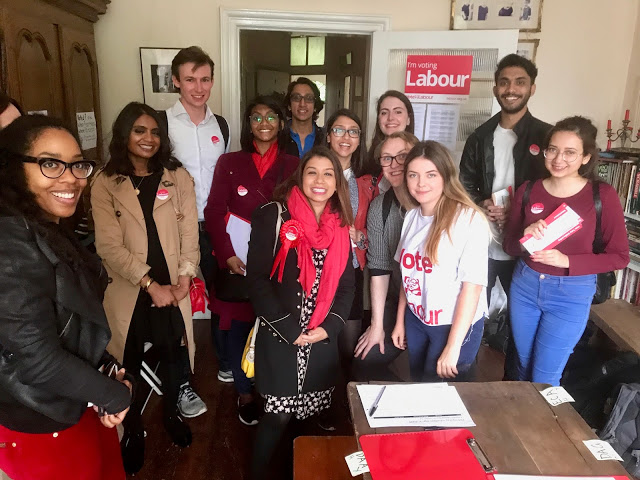 10am. Tulip, my daughter and some of the volunteers. 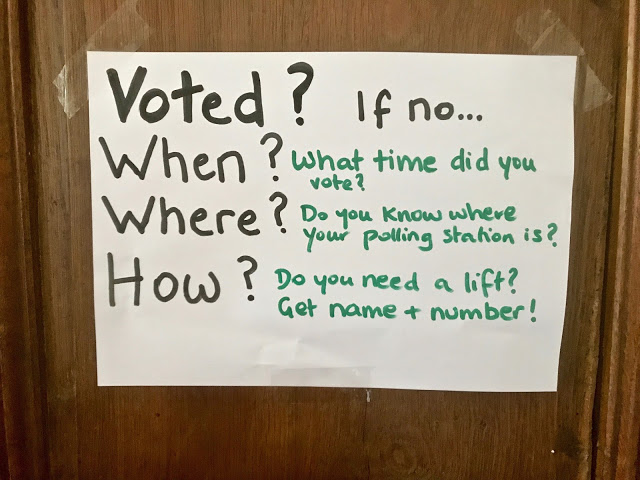 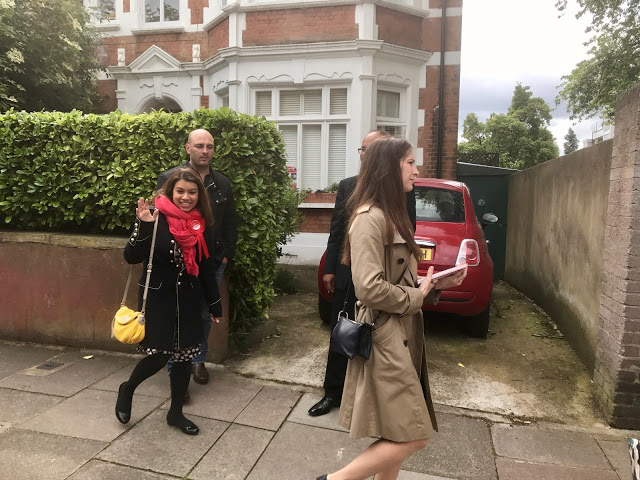 11am. Tulip goes out to knock on doors again. 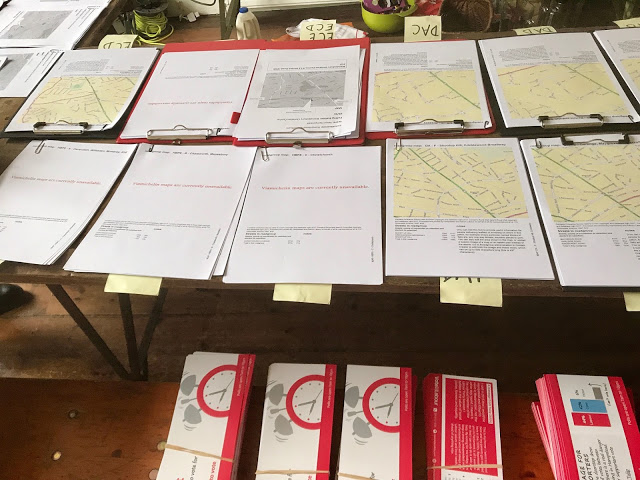 Yesterday my living room supper club became Labour HQ committee room for our ward in Kilburn. I’m next door to the polling station which is doubly conveniant. Hampstead and Kilburn is a marginal constituency. Our local MP, Labour’s Tulip Siddiq, got a majority of only 1,200 in the election two years ago.
My daughter, remember The Teen? is now all grown up and working for Tulip (how brilliant a name is that? It’s even got its own emoji ?.) This is what she always wanted to do, after getting a First in Politics at York University and an interim stint as Online Features Editor for House and Garden.
Since the election was called seven weeks ago, I’ve barely exchanged two words with her and we live in the same house. She’d return in the early hours of the morning and leave by 8 am. In the brief hours she was home, she was doing casework on her laptop in bed. It’s been a punishing schedule.
To be honest she’s been snappy, grumpy, monosyllabic and short-tempered. I don’t know what she’s been eating. Actually I do know: she’s had the same thing every meal for six weeks: a tinfoil box of vegetable biriani provided by the ‘Bengali boys’ who volunteer for Tulip, who is of Bengali heritage. 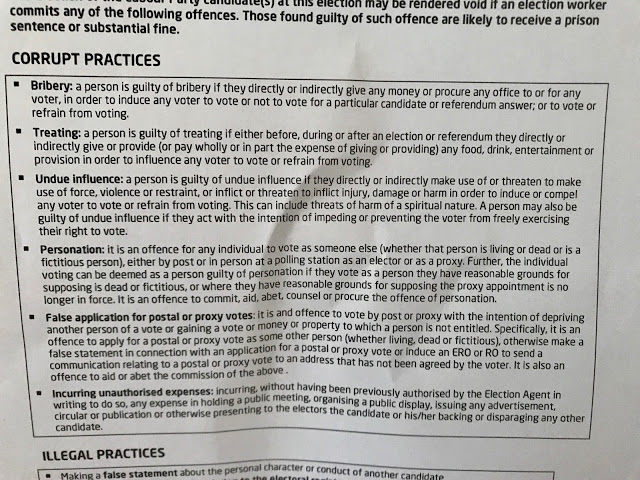 I’ve done some leafletting myself when asked. I stood outside a local school asking the mums if they were going to vote for Tulip. Around 80% said they were. She has great name recognition (#PickTulip ?!). A few of the yummy mummies looked down on me. Not sure why, at least I’m doing my civic duty.
Last weekend I handed out leaflets at Kilburn tube station. I was doing this with a little too much enthusiasm (I like engagement. I was standing next to the barriers saying ‘Who is going to vote here?’) rather than the slightly pointless handing out of more bumpf. I was asked to move outside the station. Oops.
What I learnt while leafleting:

According to my iPhone, it was predicted to be rainy weather on June 8th, My daughter groaned and looked even more stressed. Why?

Labour voters don’t vote when it rains.
And Tory voters?
Tories will vote in a blizzard. Labour voters tend to be younger and they are put off easily.

My daughter woke at 6 am, showered and put her face on.
I looked out of the window. It didn’t look too bad.
I rearranged the living room, making a T shape with the tables and putting another table at the side for drinks and food.
The day before I’d ordered crisps, chocolate, milk, sugar, tea bags, coffee, carrots, hummus, and ingredients for cinnamon buns and samosas.

We don’t want people to be comfortable mum. Said my daughter.
Why not?
They are allowed to sit down for five minutes no more. Then they have to be out again, knocking on doors.

Then she looked at my shopping and said:

But it’s nice if it’s nice, I wheedled. I want to provide a bit of style and comfort. Just because you are Labour, doesn’t mean you can’t be first class.

She rolls her eyes.
Hampstead and Kilburn as a constituency is that weird London rich/poor cheek-by-jowl situation. Hampstead of course, they are all rich nobs, although Hampstead has changed: no longer arty bohemians and intellectuals, who can’t afford to live there anymore, it’s now bankers and city people.
While Kilburn is inner city grime: lots of renters, immigrants, kebab shops, chicken joints. So this is an area of great contrast in terms of wealth.
Southern Kilburn is full of council estates that will vote Labour. Near here in North Kilburn are smaller council estates. One with small houses rather than flats is occupied mostly by white people who swing dramatically in each election between UKIP, Labour and Tory. Hampstead and Kilburn is 75% Remainer.

Louise of the Fragrant Supper Club, who lives locally, comes over to help me make samosas. I figure samosas are like portable curry, perfect for carrying in the keen hot hands of hungry volunteers.

Throughout the day my front door is open and a steady stream of young people come in and hover, waiting for instructions from my daughter. She is at the head of table next to a printer, frowning, phoning and telling people what to do.
Quite a few of the volunteers are Muslim and right now it’s Ramadan (until June 24th). Observant Muslims aren’t allowed to eat or drink, fasting from sun up to sundown, between 4 am and 9.30pm. This makes for a long and tiring day in mid-summer. I felt sorry for the Muslim volunteers and drivers.
I heard an electronic sounding call to prayer in my bedroom, I entered and one lady had a small towel on the floor and was praying. Later she showed me an app ‘Submission’ (‘to God’ she clarified) to remind herself to pray. Of course there is an app for that! It has a direction finder too.
In the committee room, it’s becoming crowded. The local Labour party have been steadily canvassing every weekend and night for months. They know each street. They know who votes what. They get ‘promises’ of who will vote Labour. Throughout the day, a guy called Eugene runs around to all the polling booths and asks the Tellers for their sheets of numbers. The voting card numbers are passed onto the person running the committee room who then sends out a team.
For example, if the person from number 3 Acacia Drive says they are going to vote at 3pm and by 4pm they haven’t, someone running a committee room will send someone round to knock them up. They will even give the person a lift to the polling station if they are frail or elderly. 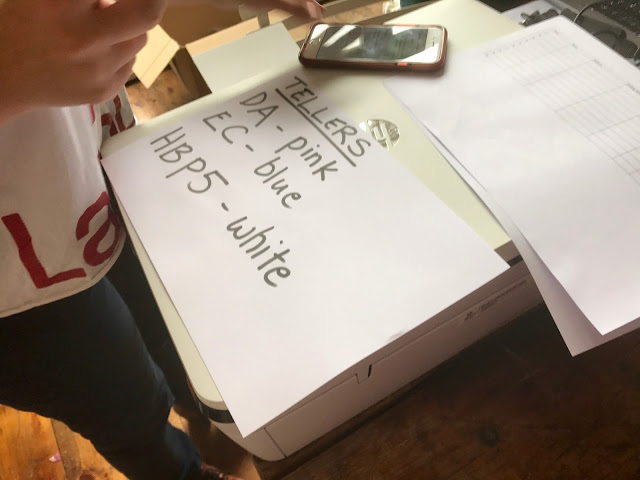 What is a Teller?


Glad you asked because most people don’t know. Tellers are the people to whom you give the number on your polling card You’ll see someone from every party lurking outside polling booths, often wearing a rosette. (The only other people that can wear a rosette is the candidate and the election agents).

At around 4pm, my daughter said she was in desperate need of a Teller nearby. The person I took over from was a Muslim doing Ramadan, and he was exhausted.
We asked to see people’s polling cards, to take down the number. Many voters are quite paranoid and ask you why. They feel voting is a private matter. But Tellers share data between parties and don’t want to know what you voted, just if you have.
I tried to explain: give us your number if you don’t want to be bothered again, or ‘re-canvassed’ today. It’s still rather hard to convince people.

The real rush starts at 6pm, when people get home from work. Queues will form at polling stations whereas before the rate is perhaps one voter a minute (in London). I baked the samosas in batches but saved most of them for the 6 to 9pm rush. Volunteers have also just got home from work and are hungry. Other volunteers have been pounding the streets all day and they need sustenance. My daughter walked for 16 straight hours at the last election. Her legs didn’t work for 3 days afterwards.

That’s why I don’t allow them to sit down any longer than five minutes, she explained. If you relax, you’ll never get up again.

Voting stops at 10pm. In the last 10 minutes we ran to the flats next door. Outside the flats it’s like an echo chamber. You can hear everything. We frantically called out:

‘Get out and vote! Ten minutes left!’

We got a couple of last minute voters who ran to the polling booth. Every vote counts in a marginal.
At 10pm Tulip, her husband, and her close team including my daughter all met at The Count where people stay up all night counting the voting slips by hand. Observers such as my daughter will stalk the hall making sure there are no mistakes, no dropped or hidden slips, no discarded votes.
Those of us who couldn’t go to the count (tickets are limited), watched the news on a laptop in my living room. Someone had brought some prosecco. After a long day, glasses were gratefully filled. We’d done all we could. The result was in the lap of the Gods.
Suddenly a roar: the exit polls says it’ll be a hung parliament. Labour have done better than our wildest imaginings. Theresa May has made a terrible mistake. We start to feel tentatively jubilant. I drink three quick glasses. The others go to a local bar to watch it on the big telly. I go to bed, exhausted and drunk.
In the middle of the night I wake up and check my phone: Tulip Siddiq has won, this time with a majority of almost 15 thousand votes. 72% of the youth vote (18 to 25 year olds) turned out. Fantastic news. But I reckon it was my samosas wot won it. 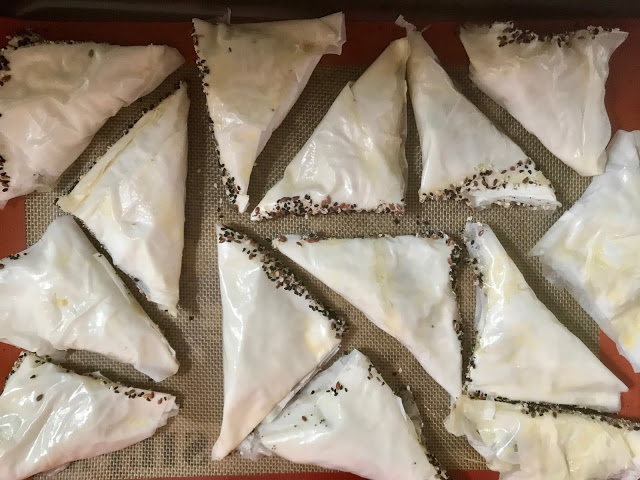 I got a cardamom plant from Plants4Presents. The leaves have a subltly sweet cardamom flavour. You can use a few cardamom seeds instead however.
Makes 30

Peel the skins off the potatoes and chop into small cubes. In a large saucepan fry the vegetable oil or ghee then add the mustard seeds. Let them pop then add the rest of the spices, the garlic, ginger, salt. Add the potatoes, stirring so that it doesn’t stick to the bottom (lower the heat), then after ten minutes add the peas. Simmer for ten minutes then leave to cool.
Prepare the filo pastry by cutting it lengthways into thirds. Pile the strips on top of each other and cover with a slightly damp tea towel. Keep the rest covered so that it doesn’t dry and become unworkable.
Take three layers of filo, lay it out in front of you and cut in half crossways.
Put a heaped teaspoon of the cooled curry mixture into one corner of the filo.
Brush the rest and the edges lightly with butter.
Fold over the filo so that you form a small triangle, continue to fold 2 or 3 times. Seal the edges then brush both sides with butter.
Dip one edge of the triangle in the seeds then lay it down on the silpat or parchment paper covered baking tins.
Fill two trays with the triangles until you have finished the potato mix and the filo pastry.
Preheat the oven to 200c.
Cover each tray with clingfilm while waiting.
Remove the clingfilm and bake the samosas for 5 to 10 minutes.
Remove and eat hot or cold. 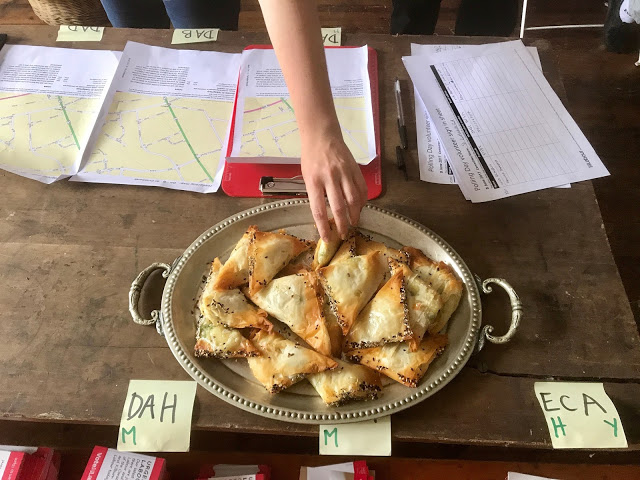