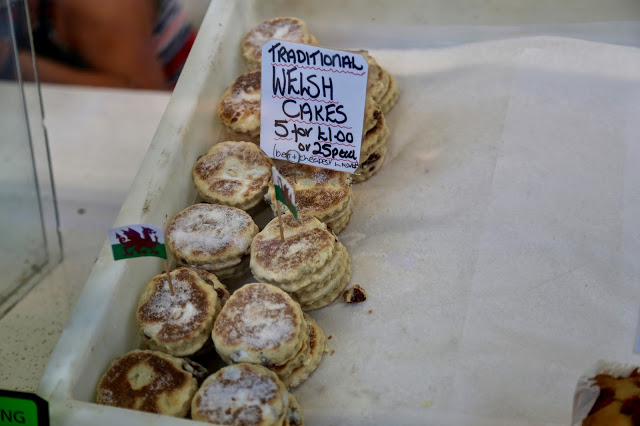 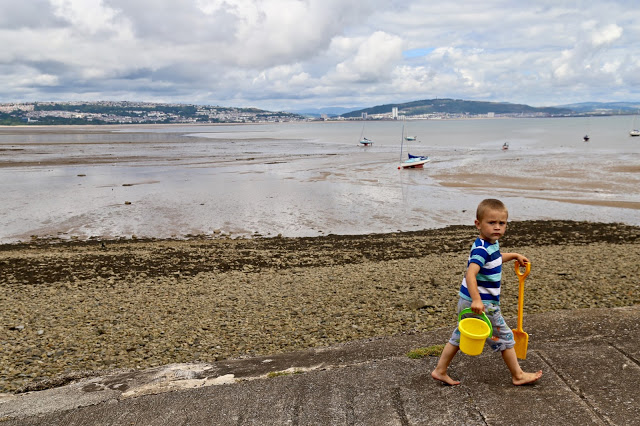 On the Megadeath coach, the driver with the silver earring talks throughout the journey.

He says: ‘Coming up on the right we will see the somethings which something the train which is electric up to here.’
‘Huh?’ mutters my sister.

Somehow I’ve vaguely understood what the driver is saying. He’s saying these metal rods over the train line electrify it. A bit like trams.
We are sitting in the front because the back of the coach is periodically overcome by waves of faecal odour, despite the initial warning from the driver asking people not to do poos ‘unnecessarily’.

‘It must have been necessary’ we nod.

My sister and I have a row about the talk/demo I gave last week at Willesden Library.

‘My friend thought you were very personable.’
‘What does that mean? That I’m a person?’

I google it: charming and friendly.

‘Yes, that you are very human,’ expands my sister.
‘This sounds like the faintest of praise.’

But my sister continues: ‘but she thinks it’s not foodie enough. That you could talk for a bit then demo a bit then talk. Plus she thinks you are underestimating your audience.’

I’m starting to get annoyed.

‘It’s not a fucking theatre piece. Anyway your friend walked out after a few minutes.’
My sister says: ‘I refuse to continue this conversation. God you are so sensitive.’

I try to explain that I think her friend is being rude.
My sister sticks her index fingers in both ears and repeats 20 times:

Eventually I give up. We fall asleep.
I wonder if I should immediately get on a coach home.
I wake up in a slightly better mood.
The coach driver starts talking again.

After arriving Swansea station where there is large branch of ‘Greggs’, we walk around Tesco. I love going to supermarkets. Particularly in foreign countries but even in different parts of England. In this one I discover they sell Welsh butter, ‘Dragon’ cheese and packets of skinned frozen avocados.

I see a young man at the till, maybe 25 years old, paying for his shop which consists of packets of instant noodles, all the same flavour. I can’t stop myself from talking to him.

‘I’m staying at my dads,’ he says apropos of nothing. ‘These’ll last me a couple of days.’

I look at the quantity. He must have about 50.

I’m dragged on. We drive through Swansea.
Betty points out the patches of wild flowers that line the main road.

‘This is saving the council a fortune. They used to plant municipal flowers. Now they have areas where they don’t mow and sow wild flowers.’

Sprouting from the emerald lawn we see poppies, cornflowers, pink and yellow wild flowers. It looks lovely.
Betty’s house is a bungalow on a hill from where you can hear the sea and the swallows who circle over the adjacent barley field.
We smoke a joint.
We walk to a cliff.
We sit on a bench over the inlet, The Gower. My sisters’ blonde extensions glow next to Betty’s pale turquoise hair.

‘Over the water there you can see Devon.’

I watch as a fishing ship twinkles in the dusk, waiting for high tide, to make its way upriver.
Perfectly spherical hydrangea bushes glow ultra-violet in the dampening light.
A tiny dog barks furiously: a jackahuahua, a mix between a Jack Russell and a Chihuahua.

Betty cooks a red Thai curry. The sauce is from a ready-made paste. It was so hot I had to pant as I was eating it.

It’s time for bed.
My sister and I sleep toe to toe on the L-shaped sofas.

Betty: ‘My weed dealer gave me 2 flannelette sheets. Do you want one?’

Strange dealers they have here.

A mermaid’s tail is pinned upon the wall, I watch it flick as I fall asleep. 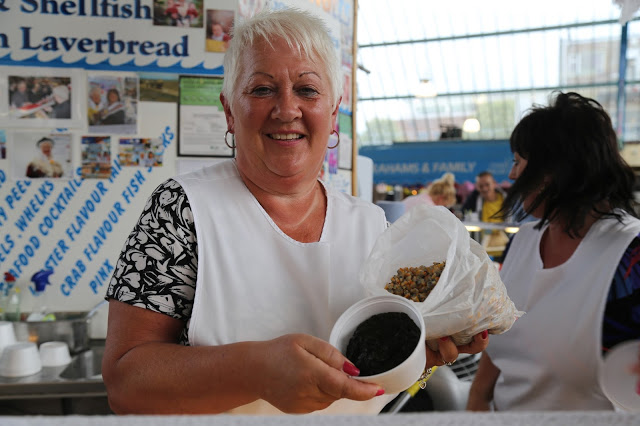 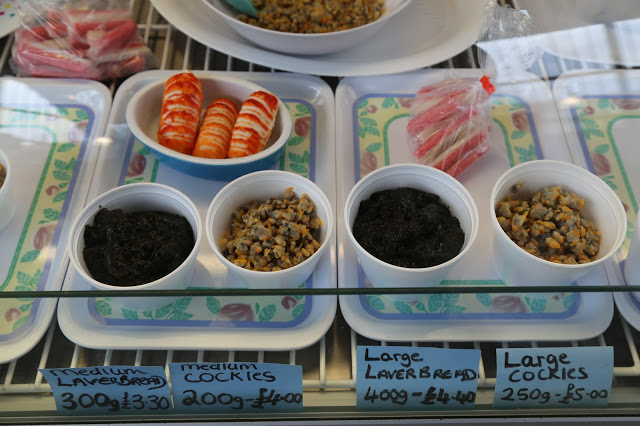 In the morning we made a watermelon dress, dyed our eyelashes and drank Colombian coffee. We rowed about Brexit and transsexuals. We drove back to Swansea, to the central market.
One stall was cleaning the griddle where they made hot Welsh cakes.
Surrounding a central pole were a few stalls selling the local speciality: laver bread and cockles. Cockles can be collected at low tide, so can the seaweed for laver bread, which is similar to Nori. It’s not actually bread, but stewed seaweed. The texture is sticky, gummy, while the flavour is strongly mineral, of the sea. I also buy a hewn-off hand-made chunk of local butter.
‘Extra salty’ recommends Betty.
Many of the girls in Swansea wear heavy makeup, a dark honeyed base with ‘contouring’, crowned with the ‘Scouse brow’. On their pale faces, thick drawn-on eyebrows look comical. It mars their delicate beauty. 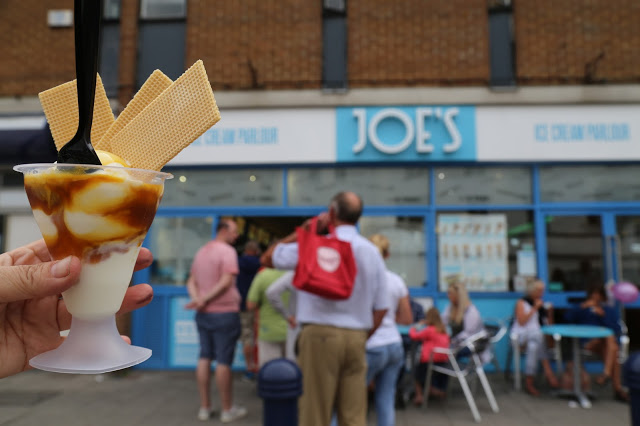 On the way back we visit Joe’s Icecream parlour,  a block of aquamarine heaven, one street back from the sea.

I order a Caramel Sundae. The subtle savouriness turns it into salted caramel. It’s delicious. I think about it all night.
Again on the bench overlooking the peninsula, stretch marks upon the water, we see the moon rise in Sagittarius and a lurex thread of town lights in the distance. 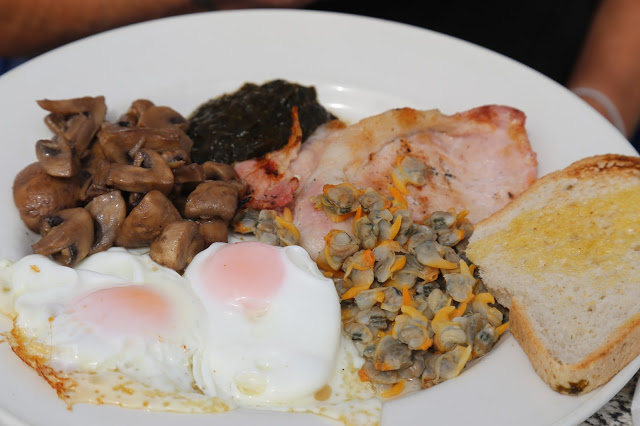 We walk downhill to the fine sandy beach at Mumbles. The weather is hot. But I’m enjoying the air. I’m enjoying breathing.

‘You can even smoke here and be healthy, the air’s so fresh’ claims Betty, who smokes a lot.

At Mumbles pier we order a fry-up from the Beach Hut Cafe: cockles and laverbread are standard with the bacon and egg. I have a veggie burger which is not very nice. It tastes a bit like meat.
There is smoke billowing in from the hillsides.

Through the grey particles, we tread towards the sea: the water is icy. Eventually, I have the guts to dive in and gradually the water feels warmer.

There are a line of empty painted beach huts. You have to go on a waiting list to get one. It’s very hard. Mumbles as a name is related to ‘breasts’, mamucium. 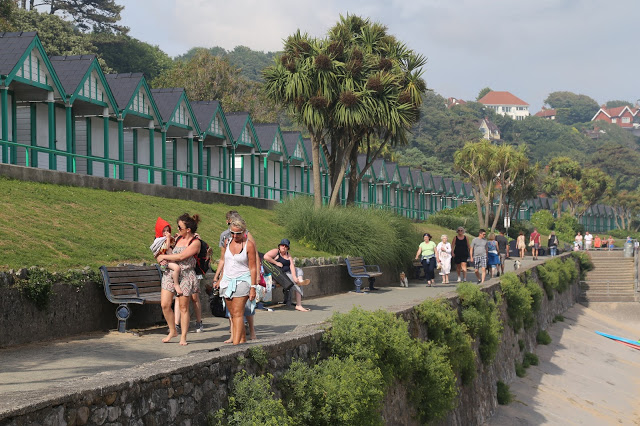 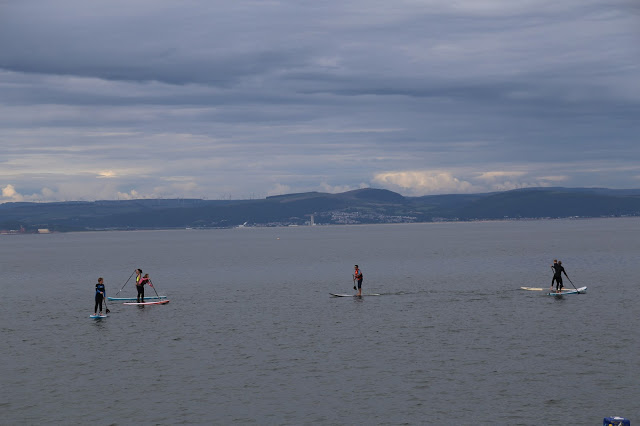 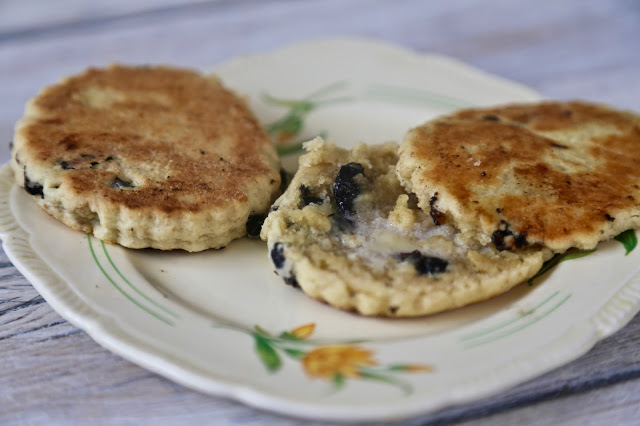 100g butter, cut into small pieces plus extra for frying

Previous Post: « Purple Prince of vegetables: aubergine ideas and recipes
Next Post: Kilburn and the High Road: where to eat, drink and shop »