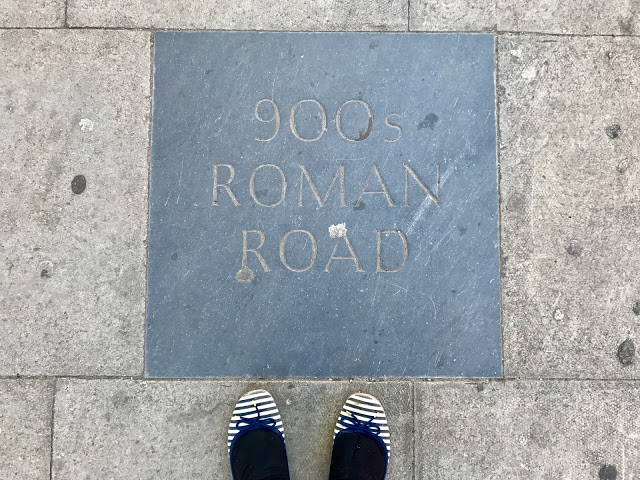 Carving a straight line through North West London or Norf Weezy as it is known by postcode gangs, Kilburn High Road, aka the Celtic Watling Street, paved by the Romans, numerically known as the A5, along a route stretching from Marble Arch to Edgware, is always busy. Even on Sundays the traffic on this road crawls along. There is a gritty romanticism associated with this grimy highway: Kilburn and the High Roads was the name of London lyricist Ian Drury’s band. Boudicca and the Iceni tribe journeyed this route for the final confrontation with the Romans. 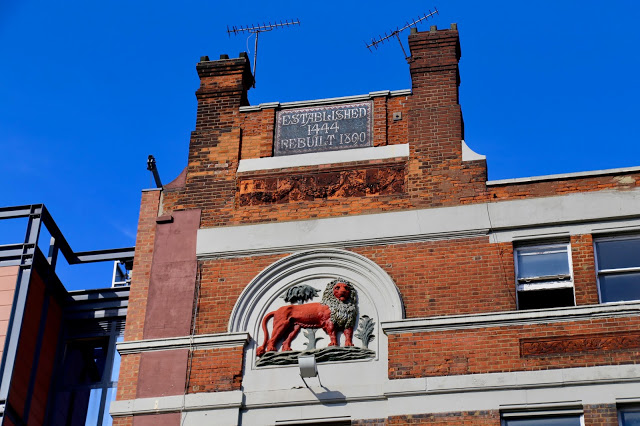 Post-war this was an Irish area jocularly known as County Kilburn. It is said that Kilburn was the distance that an Irishman arriving at Euston station could walk in one day.

‘We’ll give you back Kilburn if you give us back the 6 counties’  joked an old punter of the now closed pub Biddy Mulligans where they would collect for the IRA in the 70s.

I remember going to gigs in the 80s in Kilburn:  Elvis Costello, Madness, The Who at the Gaumont State which is now, like so many great venues, an African church. The morning after the night before, the run down cafes of Kilburn thrummed with loneliness: with Irish navvies emerging from their bedsits for a solitary fry up.
Of late accents down the High Road tend to be more from Africa and Eastern Europe than Ireland. In the late 90s, the Irish departed and young Irish stayed home due to opportunities delivered by the Celtic Tiger. Since the recession in 2008, young Irish tend to move to Clapham. 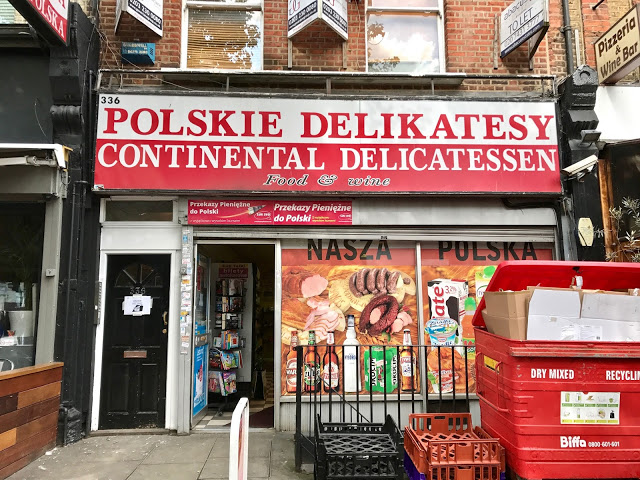 Kilburn is a transient area, consisting of renters and city workers hugging the Jubilee line rather than families. It retains an inner city atmosphere, not yet being gentrified, despite the price of property. Shops and delicatessens selling Romanian, Hungarian, Turkish, Polish, Czech, line the A5.  Women in full veil shop in the local branch of Primark, shadows flicking through rails. The architecture of local beauty parlours boast of ‘hijab rooms’. 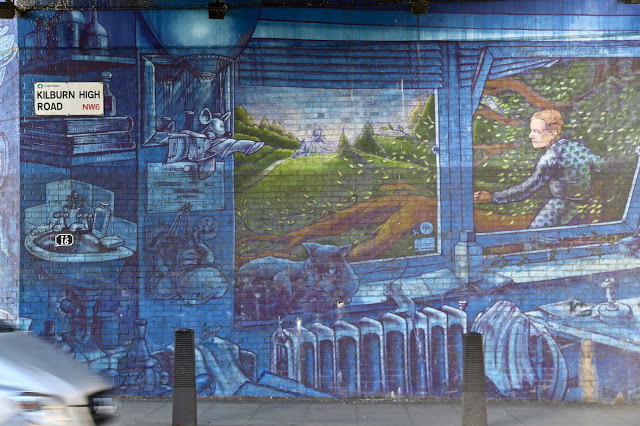 Pound shops, charity shops, vape bars and nail parlours are liberally scattered. The division between Brent and Camden separates each side of the high road. Food tends to be chicken and kebab shops: every window is scored with the glyph for ‘halal’, even the pizzerias.
Sometimes I think it’ll never be nice. There is too much traffic, too much dirt. Cleaning it up is a work of the Forth Bridge. Former Lib Dem candidate Majid Nawaz wanted to run a tram through up from Marble Arch, which would certainly make a difference, however the road is too narrow.
But times are changing. There have been a flurry of openings. Here is my guide to both new and old.
Just opened: 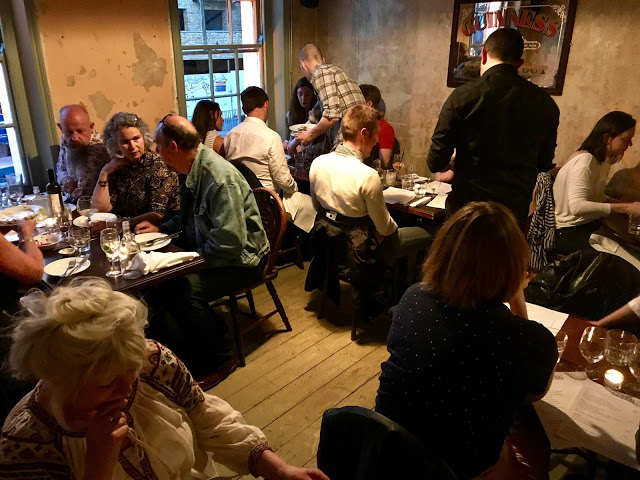 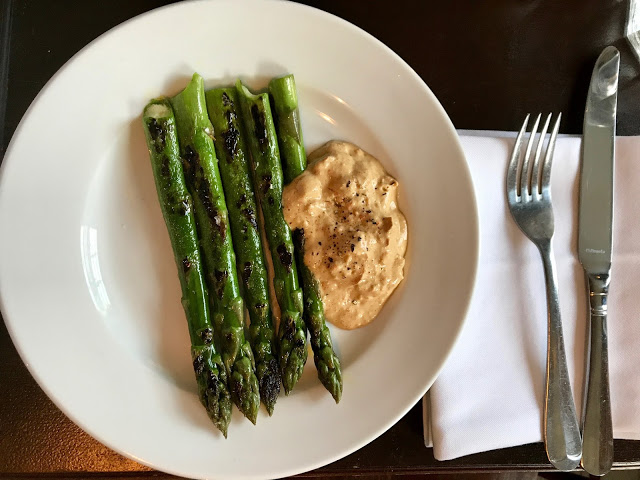 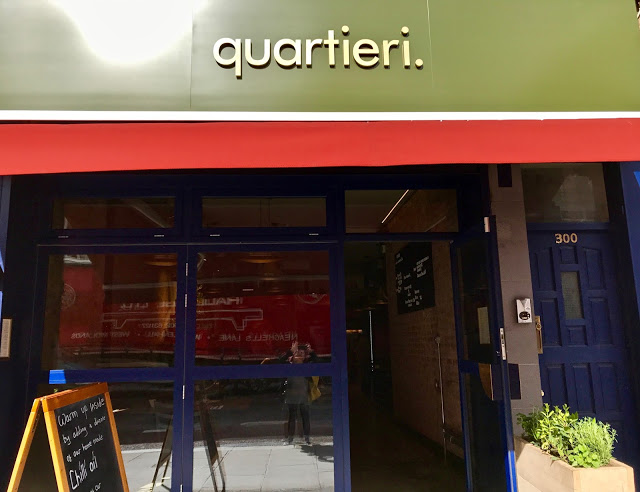 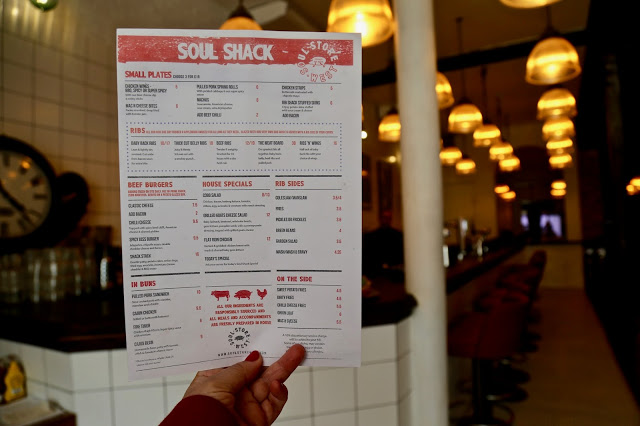 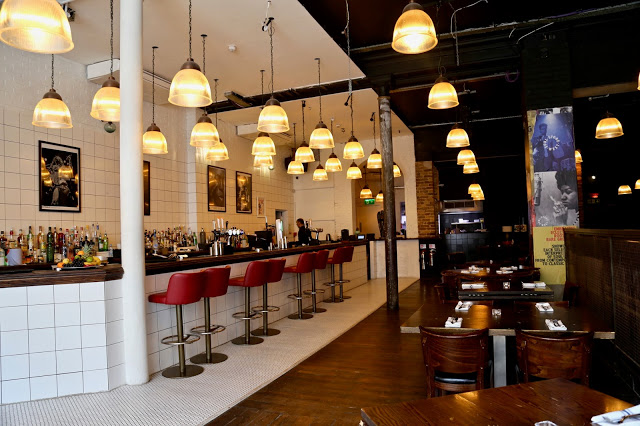 This is mostly a nightclub and music venue with DJs but presently the Chicago Rib Shack has a concession there. The wings looked good.
Soul Store West  34 Kilburn High Road, NW6 5UA
The Sweet Spot 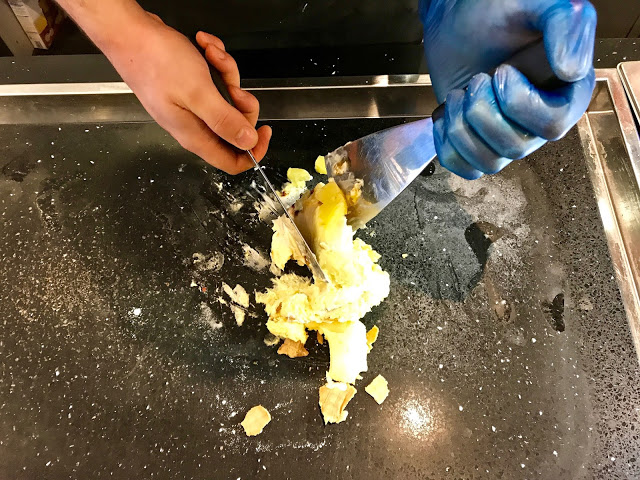 Stemming from an American chain, they call themselves a 1950’s themed ice cream parlour.  I was very impressed with their Italian gelato, iced yoghurts, sundaes, hot waffles and ‘cold stone’ ice creams. The latter is where ice cream is scraped on a frozen granite stone with additions such as fruit and nuts blended in.
The Sweet Spot  284 Kilburn High Rd.
German Doner Kebab 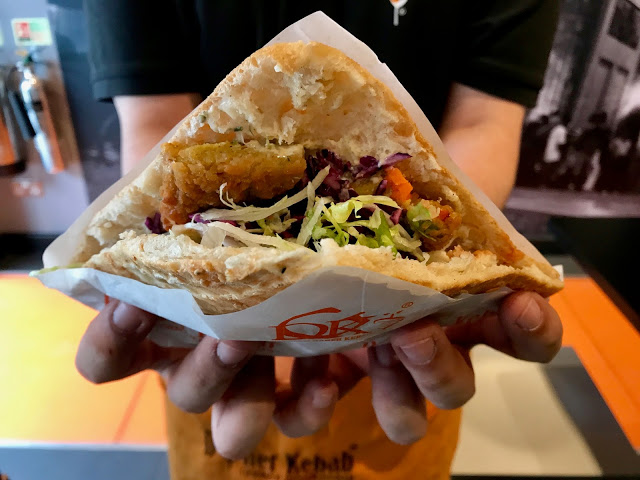 A kebab shop with a difference, these are served in a kind of waffle. I ordered a vegetarian doner, which was pretty good, especially if you ask for ‘all the sauces’. They boast of their fresh meat imported from Germany. This chain is set to grow.
German Doner Kebab  304 Kilburn High Road, London, NW6 2DB
Sweet and Savoury 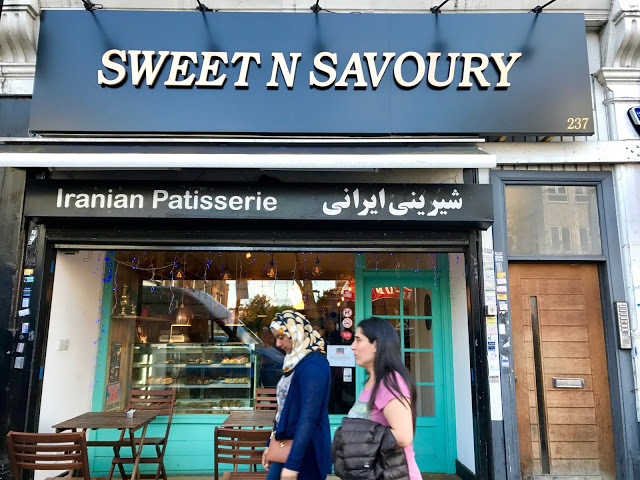 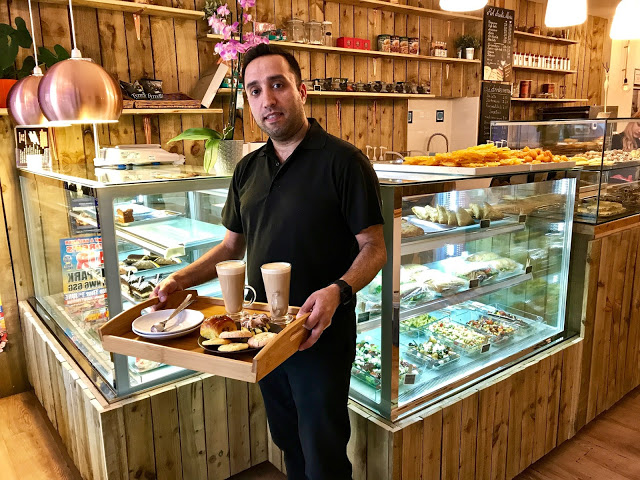 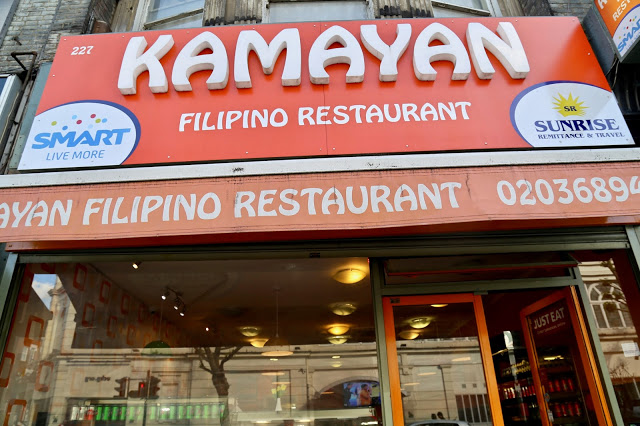 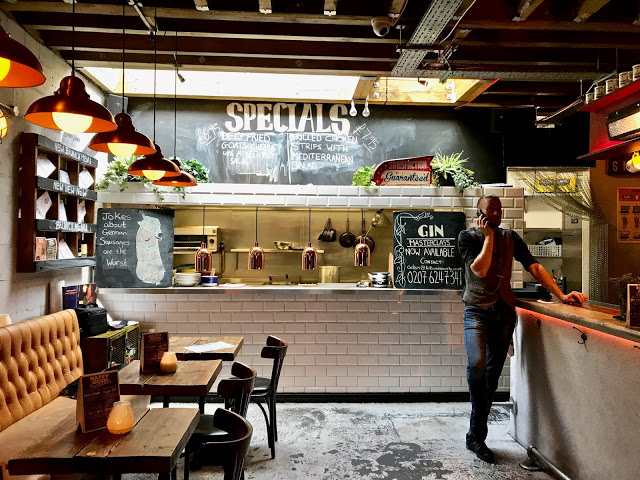 This bar opened in 2015 and won a Time Out ‘Love London’ award. They have a burger and taco menu (the tacos were rather expensive), Happy Hour between 5 and 8 pm, live music on Thursdays, average cocktails (the Margarita was a disappointment) and good draft beer.
Kilburn Ironworks 332 Kilburn High Road London NW6 2QN
Istanbul Mangal 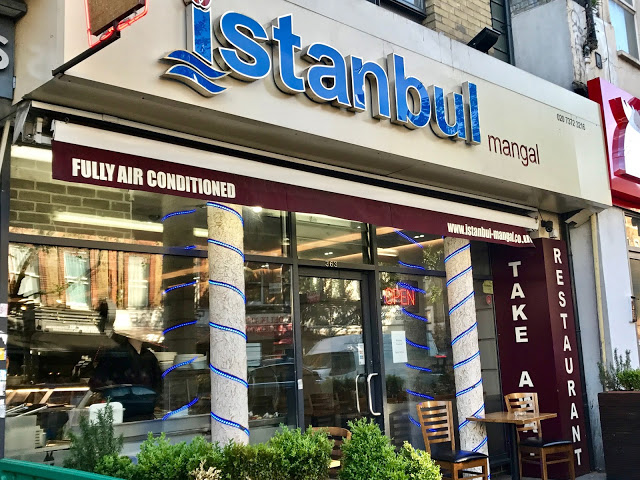 Excellent fresh food in generous portions at this large Turkish restaurant. The vegetarian meze were great: a verdant tabouleh was one of the best I’ve ever eaten. Meat-eating pals rave about the chicken shish and lamb kofte. Bread and sauces come with every meal. It’s cheap too.
Istanbul Mangal 363 Kilburn High Rd, London NW6
Vijay 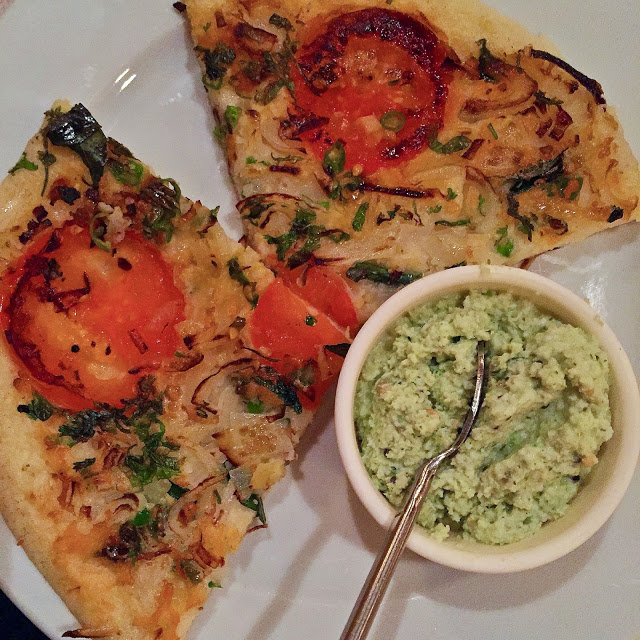 Just off the Kilburn high road on Willesden Lane, Vijay is one of the best southern Indian restaurants in London. I love the uthappam (above), a fermented crumpetty bread with chillies on top; the dosas, the vadai, savoury doughnuts; green banana curry and various other regional specialities. It’s one of the oldest Indian restaurants, dating from the 60s, with a sauna style orange pine interior. It’s always packed.
Vijay 49 Willesden Lane, London, NW6 7RF
Ariana II 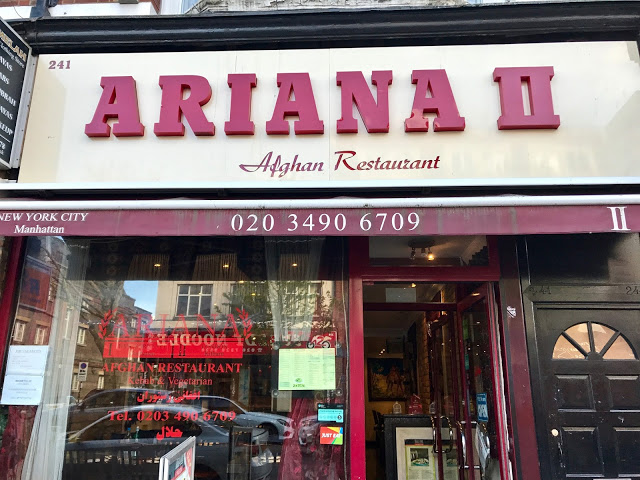 This Aghan restaurant has had rave reviews from Time Out. As a non-meat eater, I just thought this was not very tasty Indian food. Best for carnivores. Plus point: you can BYO.
Ariana II 241 Kilburn High Road, London NW6 7JN
Franco Manca 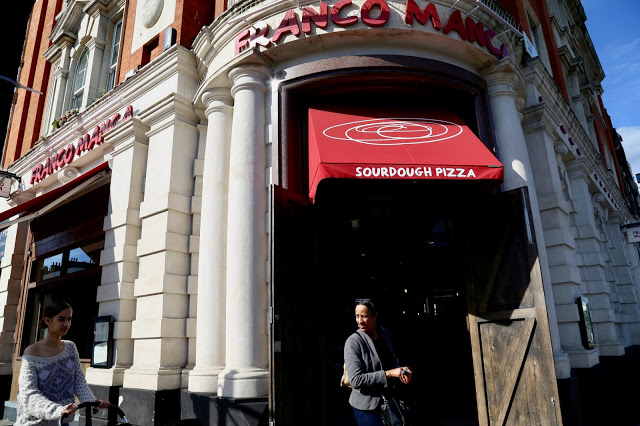 This gorgeous pub is one of London’s most beautiful with a grade II listed interior. It’s worth going for the ceiling alone. In winter there is a coal fire with leather chesterfield sofas to sit on. The food, however, leaves much to be desired. The last time I ate there, a selection of meze was spoiled by the use of old frying oil. I complained to the nice barman who was sympathetic but did not offer a refund. Quiz night on Tuesday. Guest house rooms available above.
The Black Lion Guesthouse Bar Restaurant 274 Kilburn High Road London NW6 2BY
MsMarmitelover’s The Underground Restaurant 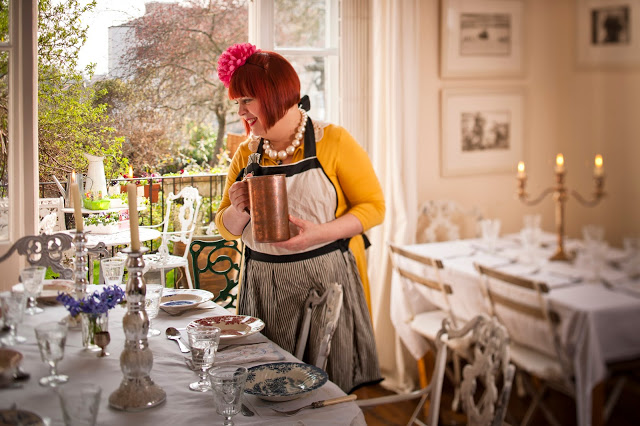 My pioneering supper club opened in January 2009 sparking a movement. And it’s in Kilburn! Expect creative cooking, generous portions, a fantastic atmosphere and themed meals in my living room. Pescatarian/Vegetarian.
Address on booking but near to Kilburn tube.
Barraco Cafe 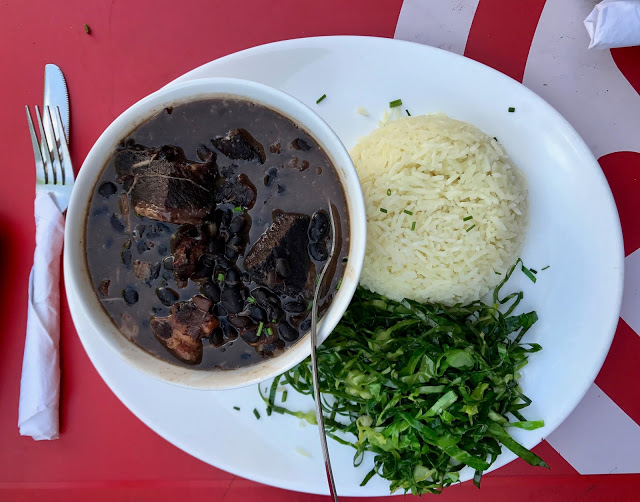 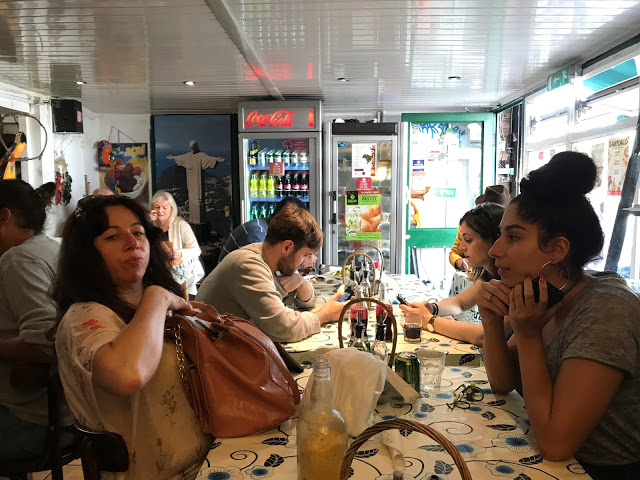 I really enjoyed my Brazilian meal at this friendly and popular restaurant. The feijoada was pronounced ‘authentic’, my rice and beans was simple but fresh and flavourful with a palm heart salad on the side. Highly recommended are their exotic fruit shakes at £2.50 each: I tried a soursop and a cashew shake. On Fridays and Saturday evenings, they have live bossa nova music. If there is good weather you can sit outside and survey the local council estates.
Barraco Cafe 10 Kingsgate Place London NW6 4TA
Small and Beautiful 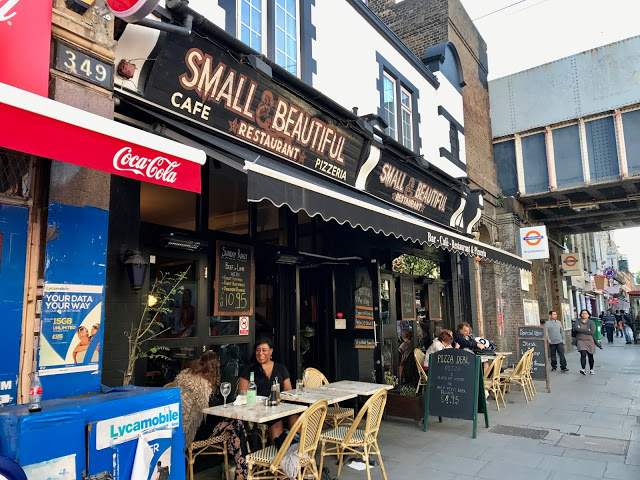 I moved to Kilburn in 2000. This local restaurant had the same formulaic menu for around 10 years. Alex the owner from Istria, took over in 2011 and the menu now features classic Italian and Croatian food. ‘The last owners were charging £5 for two courses. This isn’t possible, as my dad used to say: ‘cheap soup will burn your lips’. S and B do a fantastic spaghetti vongole, served with clams on the shell
Small and Beautiful 351 Kilburn High Road – Kilburn London NW6 7QB
The Little Bay
This very cheap local restaurant with a French menu and frankly bizarre decor (gothic with strange ‘Swiss’ chalet-style Juliet balconies) has been a Kilburn fixture since 1992. Owner Peter Ilic from Yugoslavia was a pioneer in offering affordable eating out. He used to own a ‘pay what you want’ restaurant in Finchley Road nearby. The Little Bay in Kilburn was the first of this small chain of restaurants. They do a 3-course menu for around £13, prices are more expensive after 7 pm.
The Little Bay 228 Belsize Rd, North Maida Vale, London NW6 4BT
Fire n Spice
Decent well priced Indian tandoori house. Good service and fresh tasting curries. I should probably go back, it’s been a while.
Fire n Spice 312 Kilburn High Road, London NW6 2DG
North London Tavern 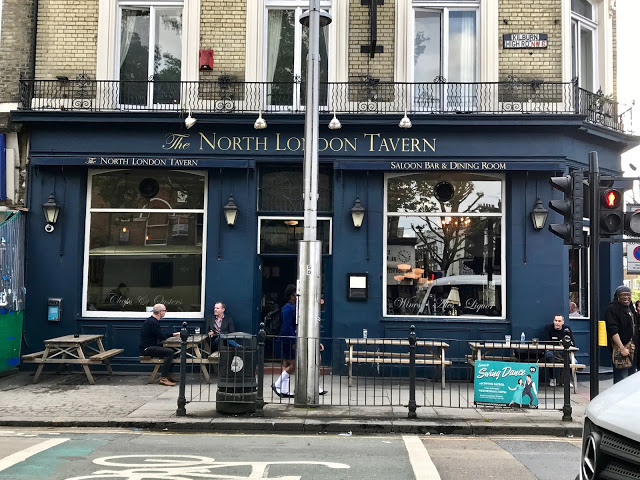 I haven’t eaten here in a while but it used to do good gastropub food. You can have some oddly trippy nights here with an entrenched bar of locals who ‘never leave Kilburn’. Don’t go on a full moon unless you like excitement.
North London Tavern 375 Kilburn High Road Kilburn London NW6 7QB
Speedy Noodle
I’ve never liked anything I’ve ordered in Speedy Noodle which is a shame, as I love noodles. Oily, gooey and not very nice. I wouldn’t trust it if you are vegetarian. But cheap fuel for some locals.
Speedy Noodle 238 Kilburn High Road, London NW6 2BS
Spicy Basil
Locals rave about Spicy Basil and it’s always full. If you’ve had halfway decent Thai food in your life, this isn’t it. Awful inauthentic watery green and red curries. Yuck. Some people have no tastebuds. Abrupt service but cheap prices.
Spicy Basil 165 Kilburn High Rd, London NW6 7HY
Shopping and other highlights: 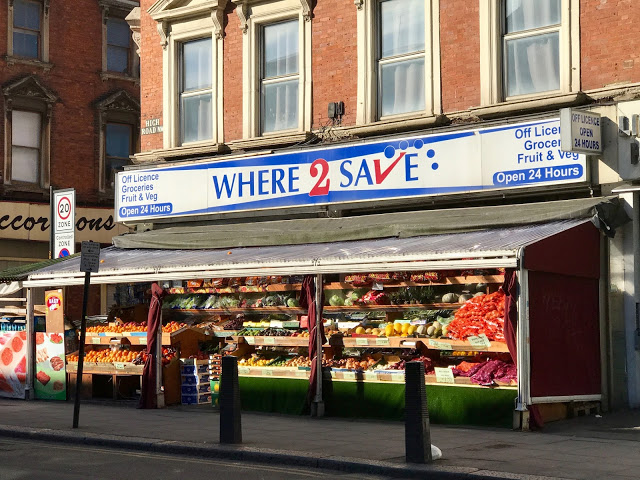 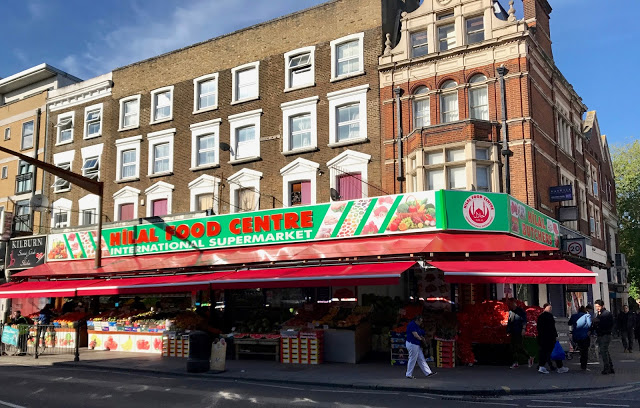 A large supermarket featuring food from around the world. I’ve seen uncured olives, strange spiny vegetables from Brazil which got stuck in my tongue for days, more types of feta than you can imagine and a good selection of Persian imported food. Foodies will spend hours wandering around scratching their heads in wonderment.
Hilal Food Centre 322-324 Kilburn High Road, Kilburn, London, NW6 2QN
The Good Ship
A place to hear live music and DJs but I go on Monday nights where you pay £4 for a brilliant night of comedy hosted by Ben Van Der Velde. You will often get top acts trying out new material. Cash only.
The Good Ship 289 Kilburn High Road, London NW6 7JR
Tricycle Theatre
Art house cinema and theatre featuring Irish, Black and often political films and plays. Occasionally there are live shows from people like Mark Thomas. This place is an important centre for the community.
The Tricycle Theatre 269 Kilburn High Road, London NW6 7JR
Folkies Music 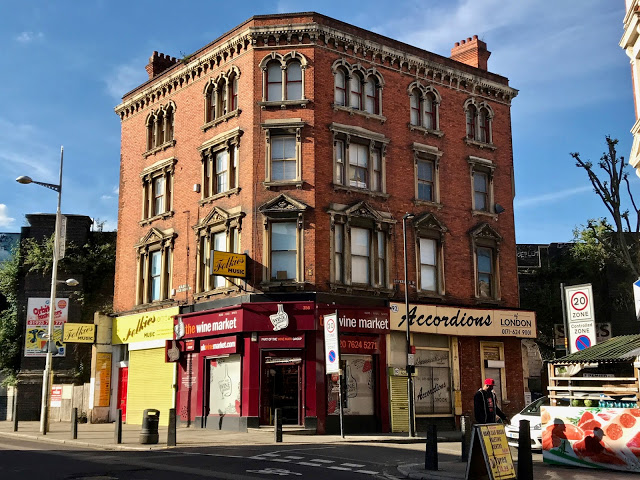