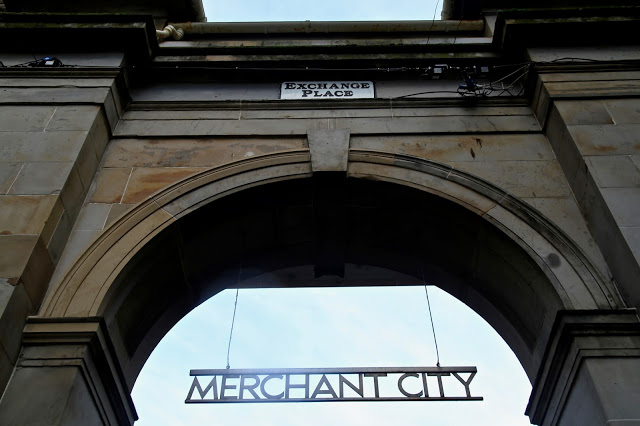 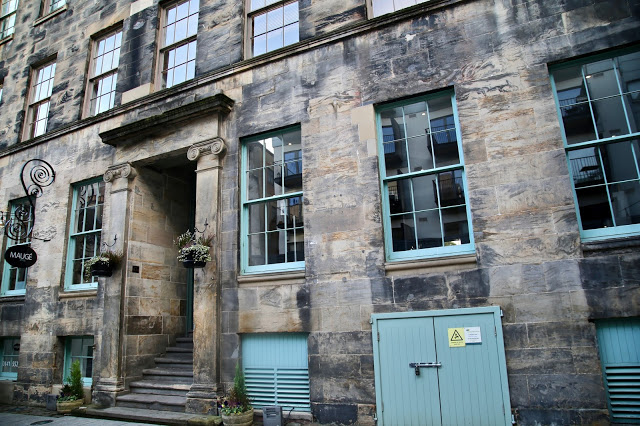 I’m part Scottish, just like many others in England. My Irish great grandfather married Isabella Anderson from Glasgow. My grandfather, John Harris Rodgers, born in Glasgow, was known as ‘Jock’ Rodgers. Jock came down to London at the age of 16 with his parents. They lived in Islington, in poor flats, near to my grandmothers’ Italian family, who were Italian. Catholics marry Catholics.

My grandfather married Carmella. He was mostly unemployed, for this was during the Great Depression. Regular employment came in the form of War World Two, when he was called up to the Royal Air Force. Being short, his role was as a tail gunner in bomber planes. This position was hazardous, the most vulnerable target, on the small cramped turret at the back of a plane. Tail gunners generally had a short lifespan.

Carmella caught tuberculosis. She had two children, Marianne and my father John. She was in hospital again, ill and pregnant with her third child Sandra, when my grandfather asked for leave to visit. It was turned down. Jock was killed on the 30th operation of his tour, the last flight. He never saw Sandra the baby. Carmella died seven years later of grief and a brain tumour. My father was left an orphan.

My dad thinks that if Jock Rodgers were an officer he would have been given leave to see his sick pregnant wife and baby. Therein begins the innate hatred of my family towards the establishment. This feeling has been passed down: we are all dyed-in-the-wool outsiders and rebels.

I wanted to visit Mary Street in Glasgow, to see the tenement building where my Glaswegian family lived. But a stonking great motorway, the M8 divided the city in the 70s, knocking down the streets where my forebears lived, where my dad and aunt went to escape the London bombing.

Who were the morons that okayed this? Why are such poor planning decisions made in our great British cities?  (While we are on the subject: who were the idiots that knocked down The Cavern in Liverpool, The Hacienda in Manchester?) Those tenement buildings, modernised, would have been more attractive than what replaced them. It’s cheaper to demolish, though, than refurbish.

Glasgow architecture is haphazard. There is the odd Zaha Hadid architectural gimmick, bits and bobs from Charles Rennie Mackintosh, but also cheap and nasty modern blocks not befitting a great merchant city. Glasgow has grand buildings but it is poor. Amongst the hipster restaurants there are pawn shops and Poundstretchers. There is also a McDonalds Bakers with a suspiciously similar typeface to the more famous McDonalds. I guess they couldn’t be sued. The MacDonalds clan come from Scotland after all.

Despite the best efforts of town planners to deter you, I recommend a visit to Glasgow.


Here are some ideas: 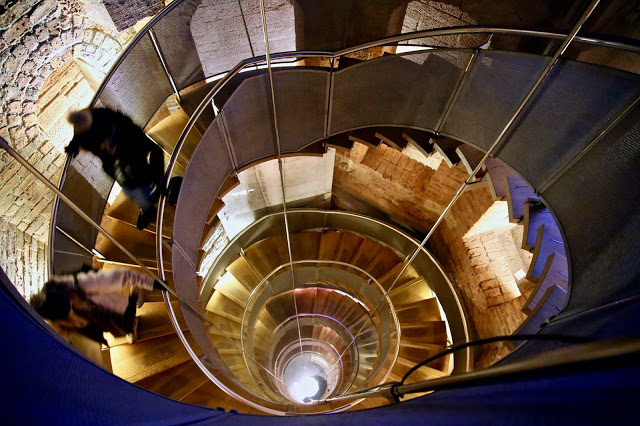 I ascended The Lighthouse, an art gallery and building featuring the work of Charles Rennie Mackintosh, to the top, where the visitor can survey, under dark weighted skies, a panoramic of Glasgow. You can also visit the Willow tea rooms, the Glasgow School of Art, and the building that houses the Stereo cafe/bar mentioned in my piece on vegan Glasgow, amongst others. 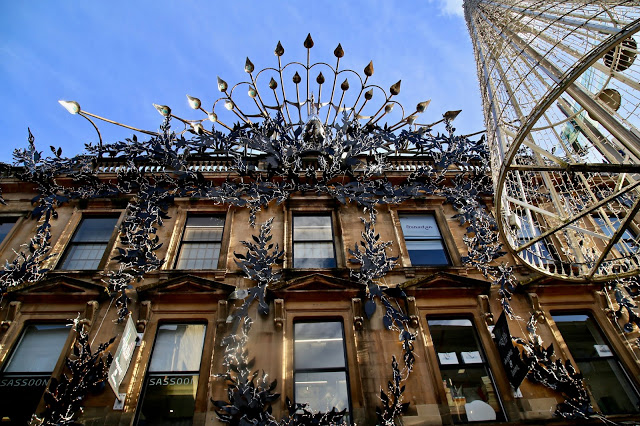 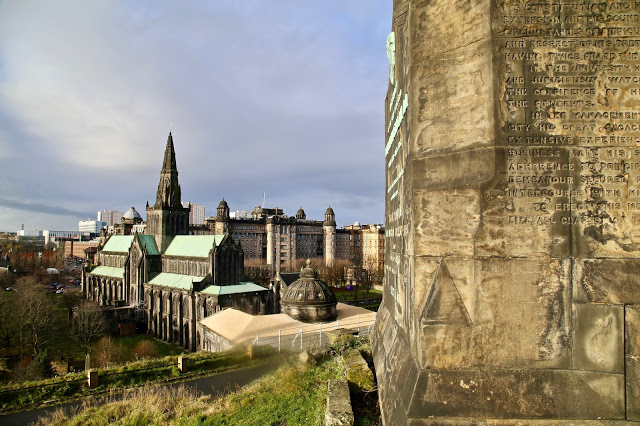 I climbed the Necropolis, a multi-denominational graveyard, on Sunday morning for the view. Glasgow was almost unrecognisable in the sunshine. The sun glinted off the cathedral while chimneys burped smoke in the Gorbals. There are free walking tours available. 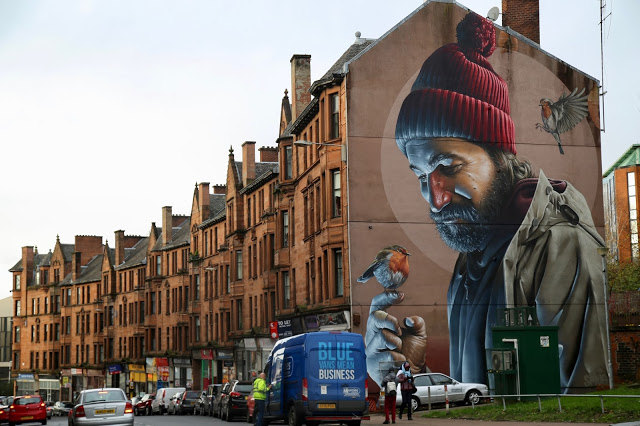 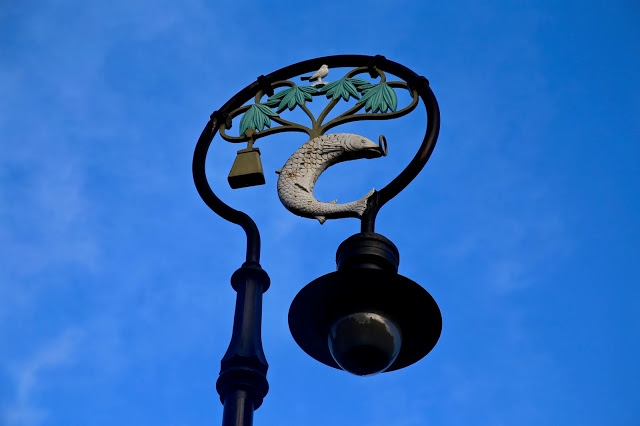 The cathedral and the surrounding area are interesting to visit. You will see the lampposts featuring a tree, bell, bird and a fish with a ring in its mouth, which also form the arms of Glasgow.  These are the symbols of St Kentigern, who is known as St Mungo. Top picture features a street mural of St Mungo. 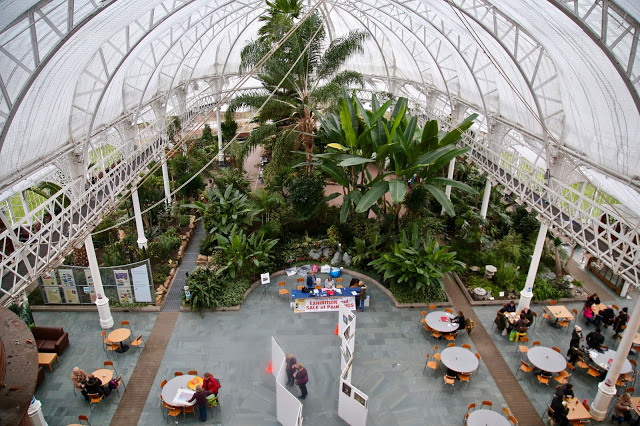 I enjoyed this museum, which documents the lives of the poor, in particular the tenements, some of which housed 20 people in one room. The population of Glasgow grew rapidly in the early part of the 20th century and housing was overcrowded. In the People’s Palace, you see the kinds of food they ate, their clothes, games and reproduction of a typical tenement kitchen. They also have a gorgeous cafe area in a large greenhouse. 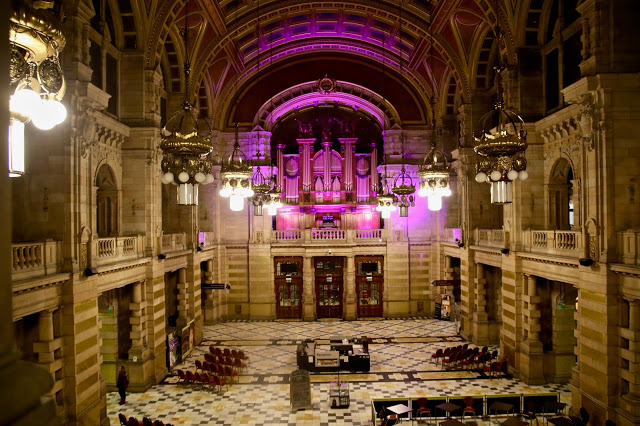 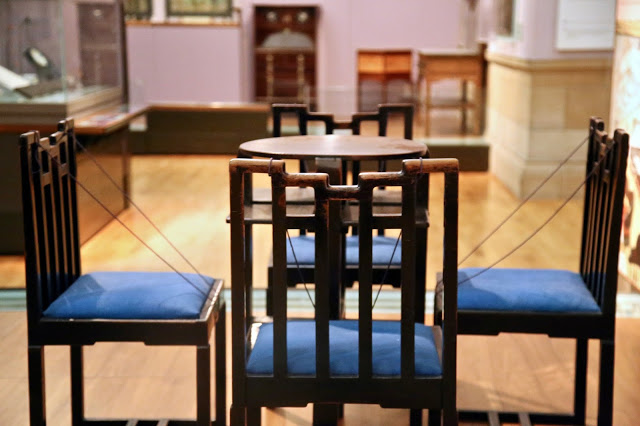 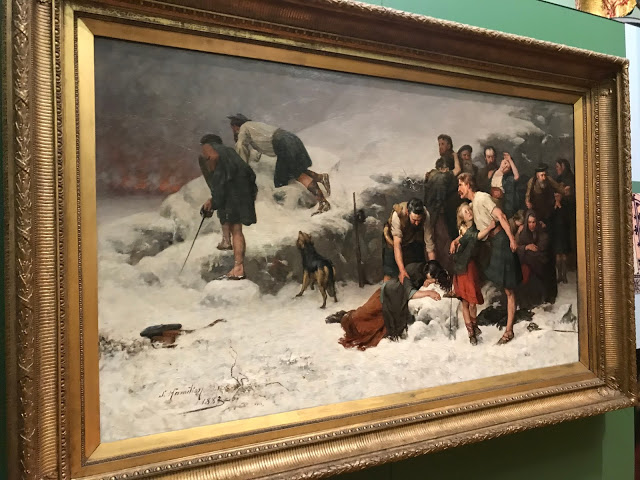 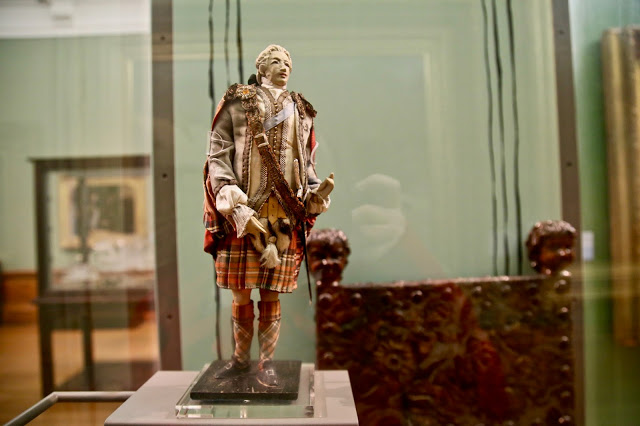 Kelvingrove museum is in a gorgeous Victorian building on the outskirts of Glasgow and is well worth a visit. My favourite galleries displayed vintage jackets in tartan, a heart-breaking painting of the highlander clearances, Charles Rennie Mackintosh furniture and china (blue willow). There are also dinosaurs, a spitfire plane, strange hanging heads, so look up as well as around. 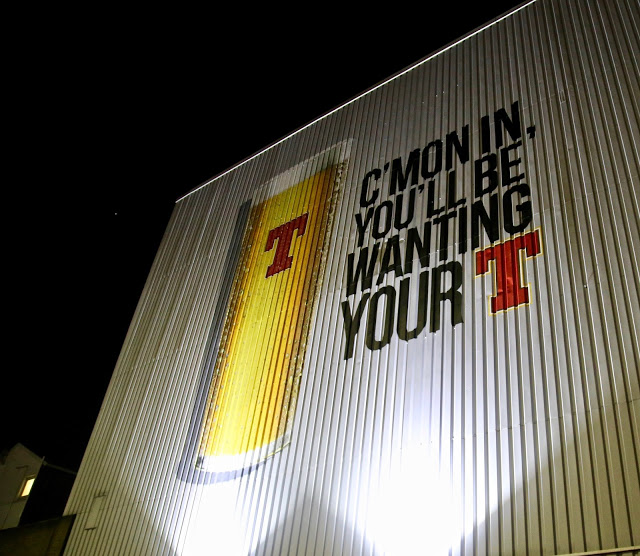 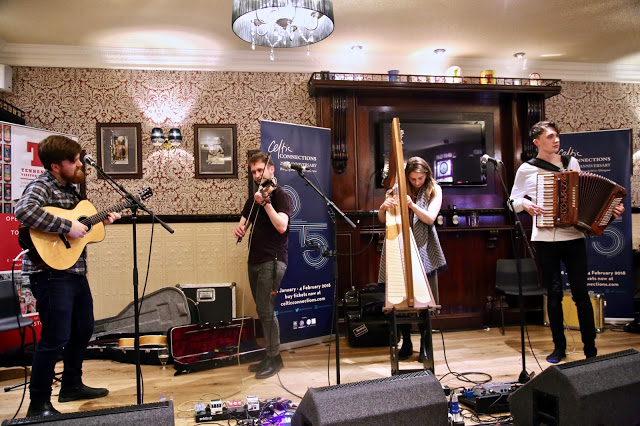 Tennents is Scotland’s oldest beer distillery, probably the most popular drink after whisky, buckfast and Irn Bru. You can do a tour around the distillery. As part of our press trip (comprised of European travel bloggers) we got to hear very talented local musicians, part of Celtic Connections, a winter music festival in Glasgow, playing in the Tennents on-site pub. 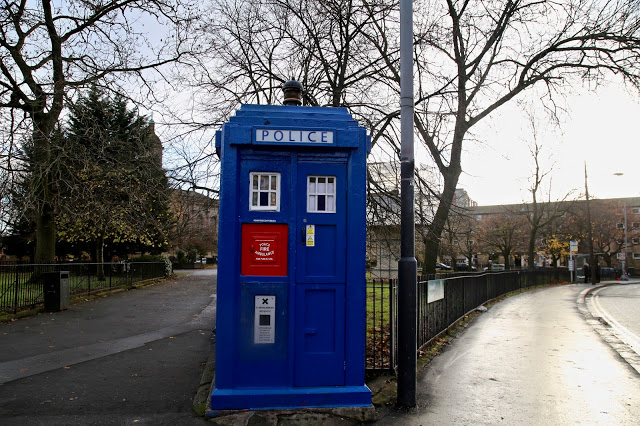 Fans of Doctor Who and of old British street furniture will be delighted that four of these Police Boxes can be spotted around Glasgow. They were originally used as mini police stations. The above can be seen in Cathedral gardens. 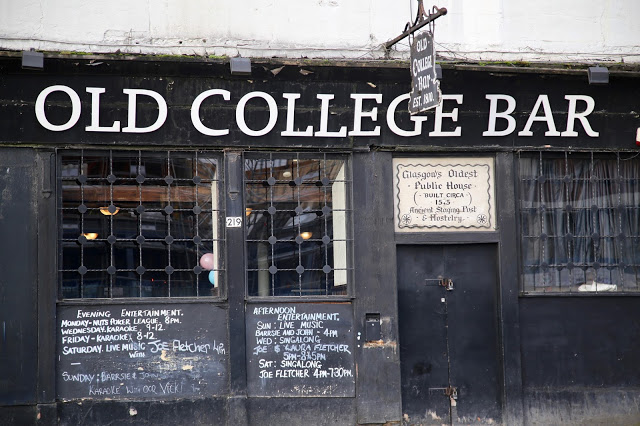 The Old College Bar, Glasgow’s oldest pub, was built circa 1515 and incredibly, it’s being threatened with demolition. (PLEASE Glasgow STOP KNOCKING DOWN THE PRETTY PARTS OF YOUR TOWN).

For some reason our (Scandinavian) tour guide (in fact most of Visit Scotland seem to be French, the auld alliance in action) said this was Glasgow’s most dangerous pub, full of criminals. That just made me want to visit more but I didn’t have time.

If you are a whisky fan, visit The Pot Still, which has more than 600 whiskies (as recommended by Rachel McCormack author of ‘Chasing the Dram’) and Dram in the West End. 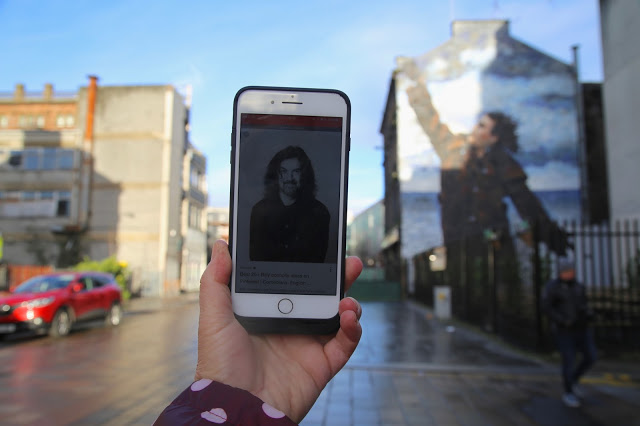 Glasgow’s most famous son, comedian, actor and musician Billy Connolly had a series of mural portraits painted to mark his 75th birthday. This one didn’t look very much like him. 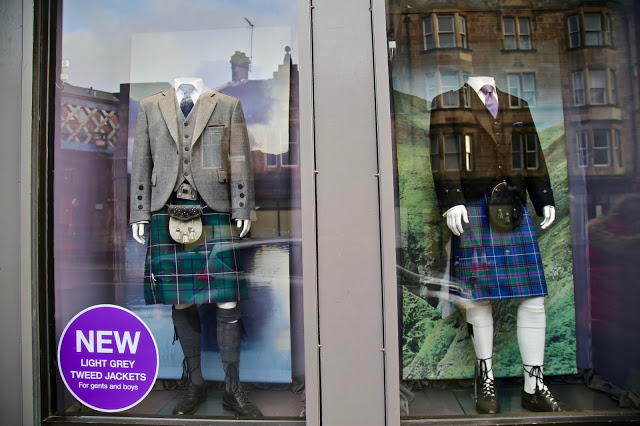 Think of a kilt as a woolly sari. A kilt outfit can cost upwards of £600; the most traditional will contain 8 yards of wool tartan, socks with ‘flashes’ or garters, a sporran (basically a handbag as kilts don’t have pockets), a kilt pin. Those shown in the pictures are weekend or walking kilts because they are already pleated and probably not wool. I think all men should wear kilts not trousers. It’s just so much sexier.

Try Slanj Kilts or MacGregor MacDuff for Outlander swoon-worthy macho dressing.
Remember, your clan and tartan are descended from your mother’s side, so in our families case, it’ll be Clan Anderson, which is a ‘sept’ (or sub clan) of Clan Mackintosh.

12) The oldest house in Glasgow 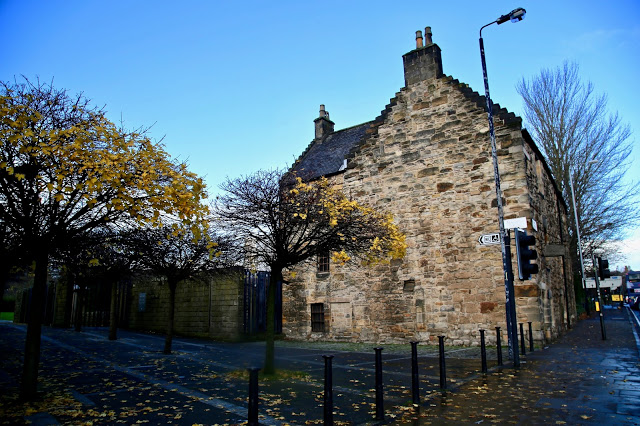 Built in 1471, the Provand’s Lordship is one of only 4 medieval buildings they haven’t yet managed to demolish in Glasgow. I only saw the outside but there is a museum and garden to visit.

13) Walk along the river 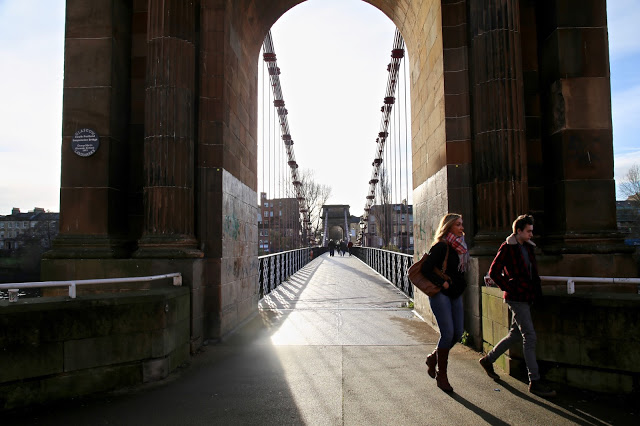 The river Clyde runs through Glasgow and it is a pleasant walk. Now shipbuilding is no longer a big industry, Glasgow is developing the river banks, rather like the Thames in London.

I travelled to Glasgow via the Caledonian Sleeper, courtesy of ScotRail. In 2018 this train will be upgraded to include double beds and wifi.

In Glasgow I stayed at the Abode hotel, which features a 1930s ‘cage’ lift. The staff were very helpful, especially when I flooded my bedroom. Sorry.

This visit was courtesy of Visit Scotland.