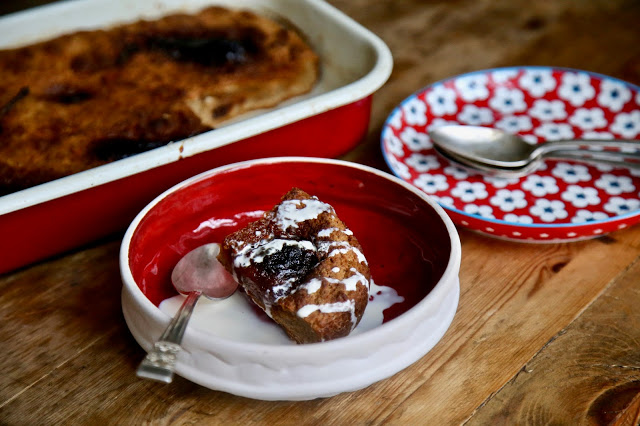 I don’t like to throw away food. I like to keep a nice tight pantry.
After my New Year’s Eve fondue event, in which people ate a great deal less bread than I had planned, I ended up with two large basketfuls of stale white bread, cut into squares. What the fuck am I going to do with this?
Then I remembered the bread pudding that my Nanny Savino made. It was the old war-time rationing style bread pudding, heavy, sweet, comforting. Nanny Savino sold squares of it from her council flat front door in Holloway, along with toffee apples and Woodbines. This dish is from a time when nobody threw anything away.
I made two versions of this bread pudding, using up jam jar preserves from my pantry. The first version, made with a jar of prunes in Armagnac, was dark, fudgy and alcoholic, almost indistinguishable from Christmas pudding. The second bread pudding was lighter and paler, with vanilla and pears stewed in whisky and white wine. It shows that bread pudding is endlessly adaptable.

I spent quite a bit of my childhood in France, near a village called Condom in the Armagnac region. We had these every day for pudding. Even kids were given alcohol in south west France in the 70s. I got sick of them at the time.

Bring the prunes, water, sugar and vanilla pod to the boil, then simmer gently for half an hour. Pour into a sterilised litre jar with the Armagnac. Store in a dark cool cupboard. These get better as time goes on. The bottle I used was five years old, therefore very pungent.

Soak the dried fruit with the sugar, spice, zest, nutmeg and cloves in one bowl.
In another larger bowl soak the bread in the milk.
Preheat the oven to 180c.
Butter a shallow baking dish (20 x 15cm approximately)
When the bread is soft, take another bowl and combine the melted butter and egg.
Place all three bowls (bread, alcoholic fruit and egg mix) together and pour into the baking dish.
Bake for an hour. 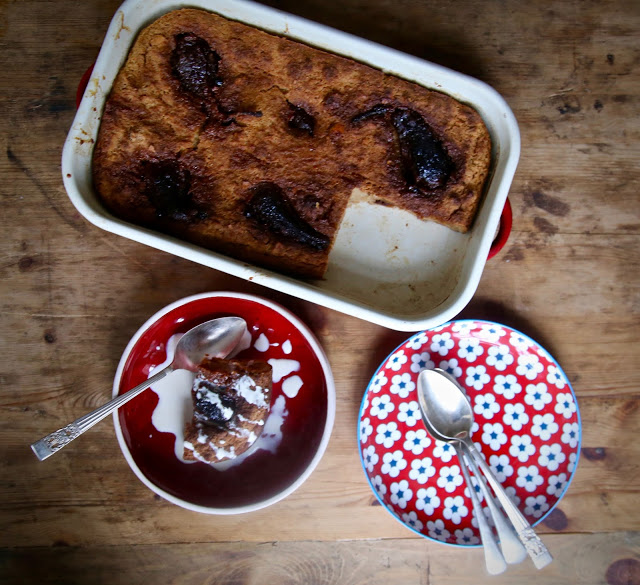 In one bowl soak the bread and milk.
In another smaller bowl, mix the sugar, vanilla, butter and egg.
Preheat the oven to 180ºc.
Butter a shallow baking dish (20 x 15cm approximately)
When the bread is soft, add the sugar and egg mixture.
Drain the poached pear alcohol into the mixture and stir.
Pour the batter into the buttered baking dish.
Add the pears, pressing them into the batter decoratively.
Bake for an hour.

Serve with custard or cream.

Previous Post: « Girl drinks whisky: visiting Oban
Next Post: What to eat and what to do in Antwerp »