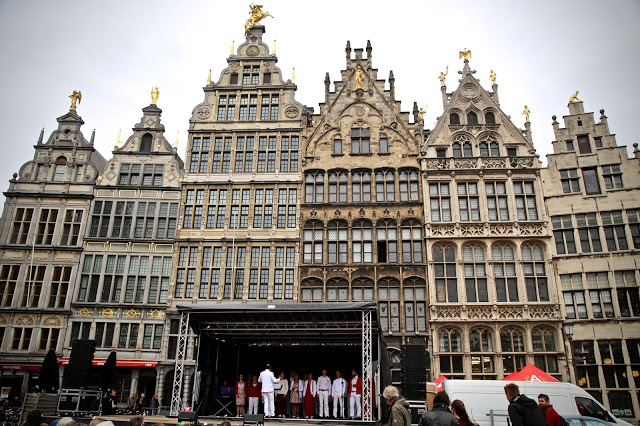 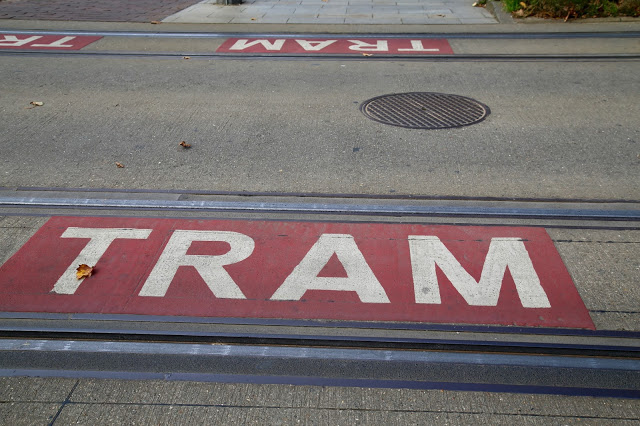 Belgium is the Catholic version of Holland. As a country it’s only been in existence for 150 odd years but of course the culture, the history dates back much further, to the 12th century at least.
Flanders comprises of Belgium, but also parts of France such as Lille (les schtimis). Antwerp is a medieval Flemish town where the air smells of chip oil, the sky is perma-grey, church bells ring, the sound skipping across the cobbles and the uneven streets are striated with tram tracks and buses. Antwerp is perhaps less charming and quaint than Ghent and the people less friendly, but this is an important city, an industrial port, a hub for the diamond trade and which retains a historic centre worth visiting.
On February 16th I’m doing a Flemish influenced supper club with food writer Regula Ysewijn. My trip to Antwerp, guided by Regula, was the inspiration for this. Booking details at the bottom of the post.

What to eat and drink in Antwerp: 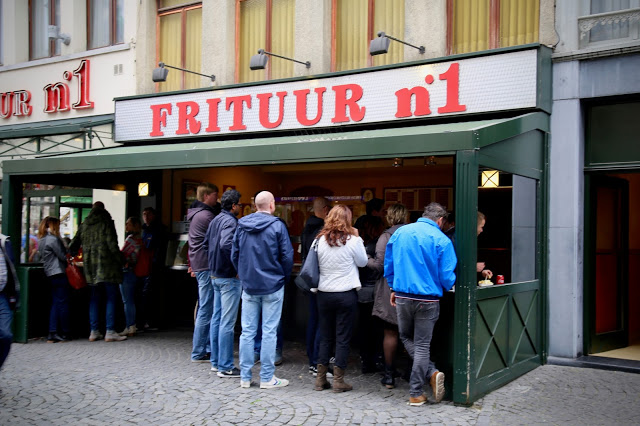 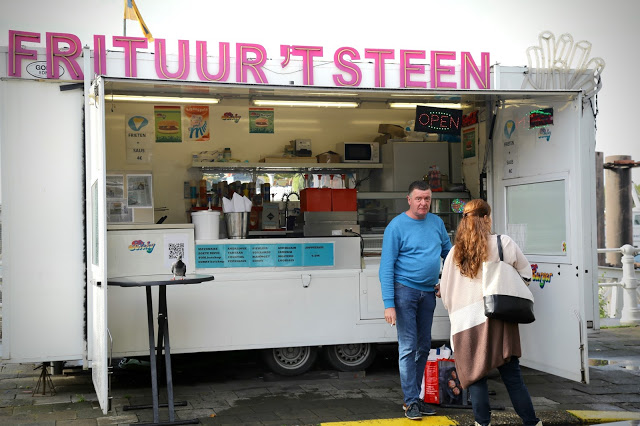 The Belgian chip is basically ‘French Fry’ in style, thin, golden and crispy dunked in mayonnaise, rather than thick and soggy with malt vinegar like British chips. (Regula Ysewijn turned me onto a ready-made Belgian mayo Devos and Lemmens, which is squirt directly into the mouth addictive.) The Frituur’t Steen next to the river is reportedly very good. 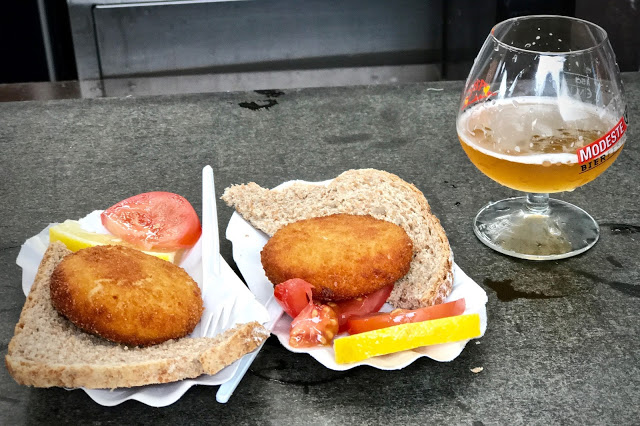 Mashed potato dumplings covered in bread crumbs and deep fried. You can get plain, cheese, shrimp or ham. SO delicious. The cheese croquettes at De Rooden Hoed are recommended. Recipe for these coming soon. 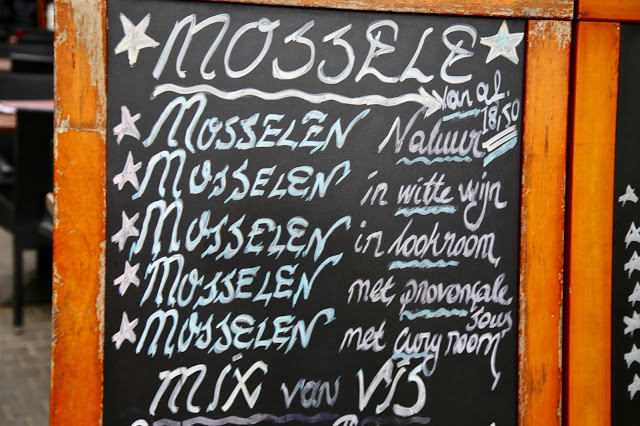 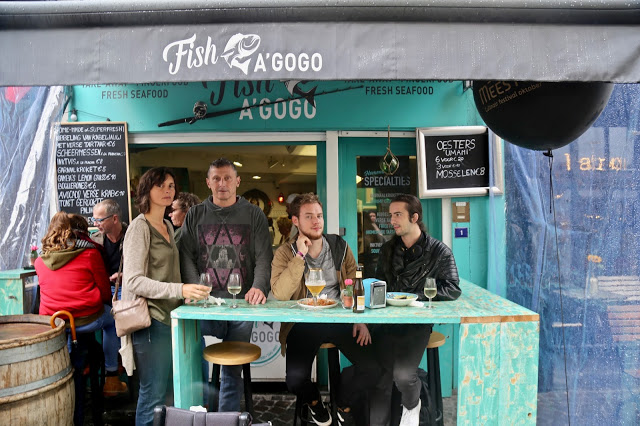 Mussels with chips is a classic Belgian dish which can be found at many restaurants. Go to Fish A’gogo for the best fish and chips in Antwerp. 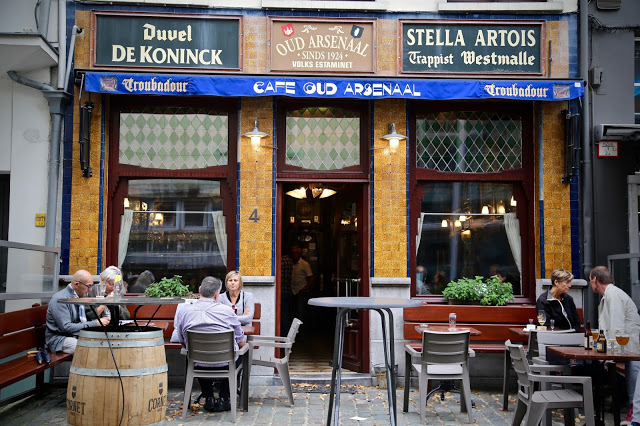 I discussed beer with Regula Ysewijn in another post. But you must visit Oud Arsenaal bar, built in the 1920s, to find an authentic Belgian beer café: a good selection of beers, served in their specific glasses, a zageman behind the bar, beautiful original tobacco-stained decor and friendly boozy customers. A place you can go to alone as a woman and not feel weird. If you order Rodenbach, a red beer, you will sometimes get a little bowl of brined brown shrimp served with it.
If you go in October you can visit the Modeste Beer Festival. 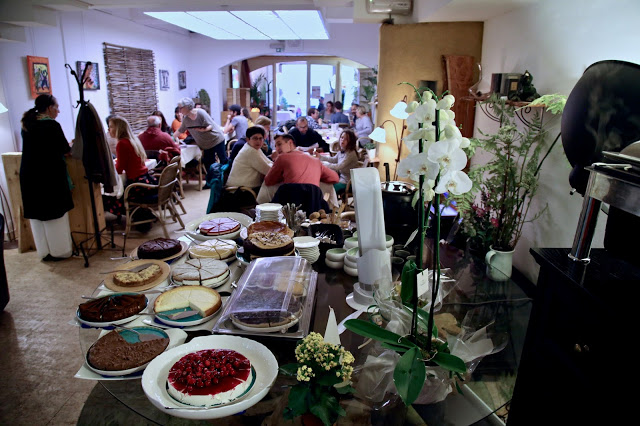 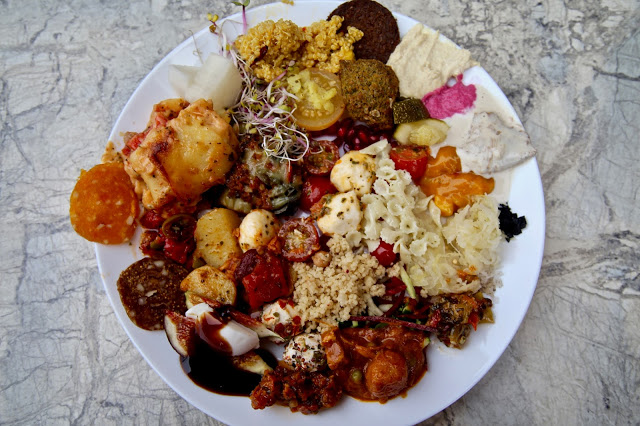 Although Belgian cuisine isn’t inherently veggie, fortunately, and increasingly, in most European cities, there are good vegetarian restaurants in the town. I visited an incredibly cheap Indian buffet style restaurant Aahaar (rather like London’s Indian Veg) which only cost 10 euros.
I had dinner at a pay-by-weight restaurant Rosenobel (like London’s Tidbits) which, if you want a varied diet, has an incredible range of foods, something like 150 different plates, to try. 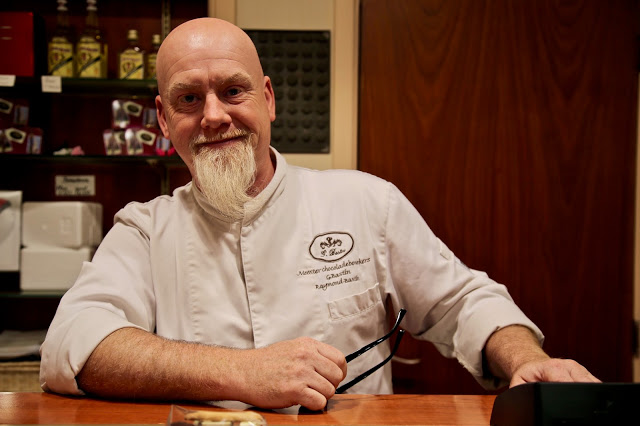 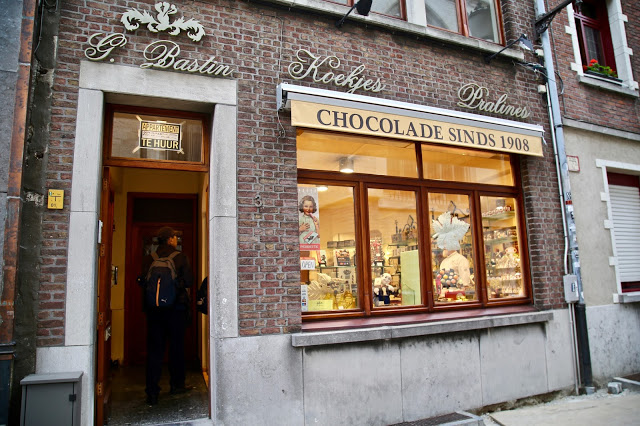 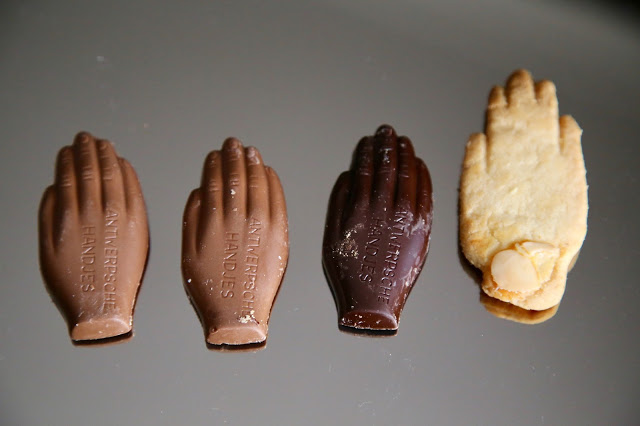 Belgium is associated with good chocolate, particularly pralines. I visited one of the oldest chocolate shops, G Bastin and bought some chocolate hands, the symbol of Antwerp. 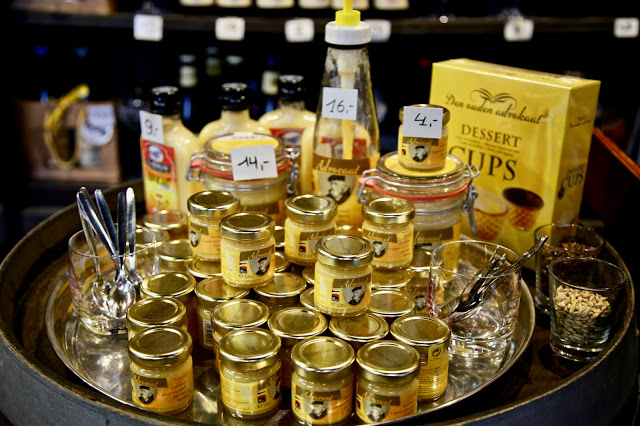 Strictly speaking advocaat is a Dutch product but I saw places where they sold the artisanal version. I loved this egg liqueur as a kid, either straight or as a ‘snowball’ cocktail. Time to bring it back! You can make it yourself.

What to do in Antwerp 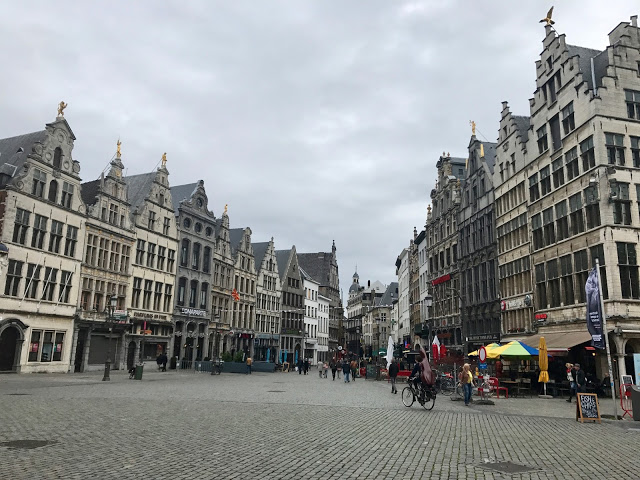 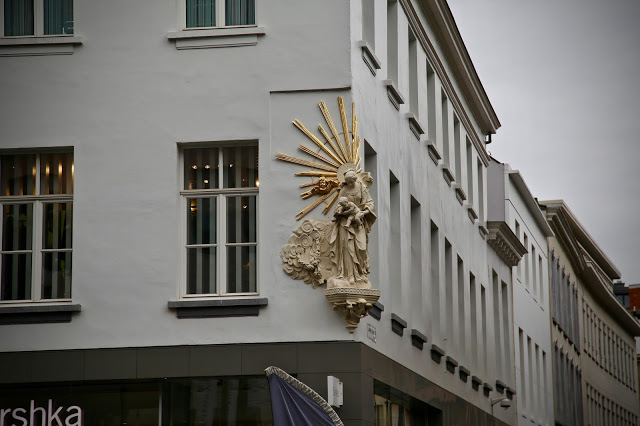 Antwerp has everything from futuristic Zaha Hadid buildings where multi-faceted crystal ‘rocks’ crouch atop houses, to gothic cathedrals, to renaissance guild houses with crow-stepped gables. Look out for architectural details on street corners such as the gilded religious bas-relief above. Just go walking! 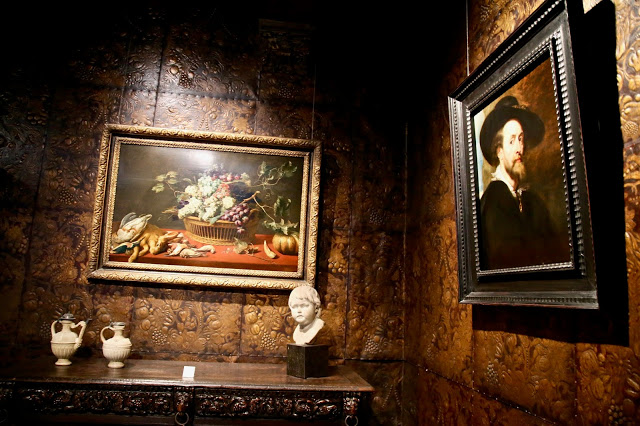 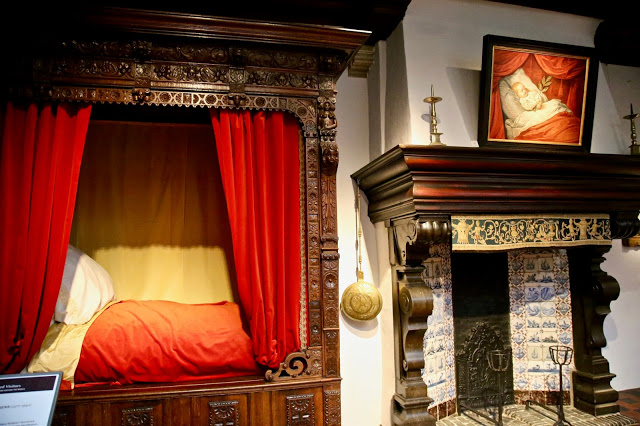 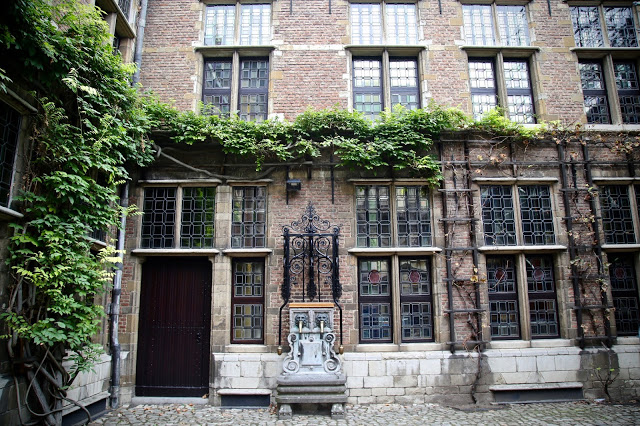 A visit around the house of Rubens, the 16th century painter, is very enjoyable. The estate of David Bowie has lent a painting. You get to walk through the bedrooms, the dark wooden stairways, the courtyard, his painting studio with tall windows and northern light. 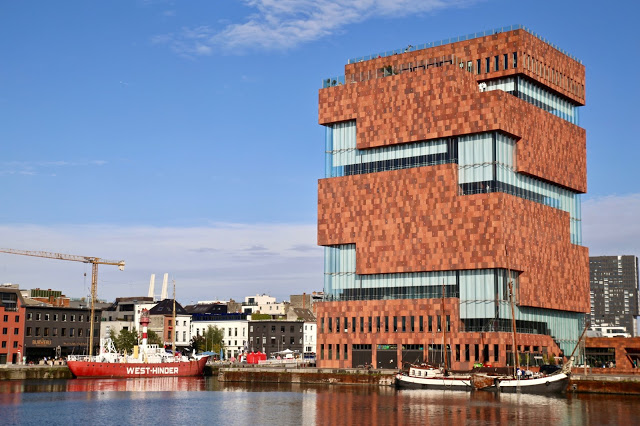 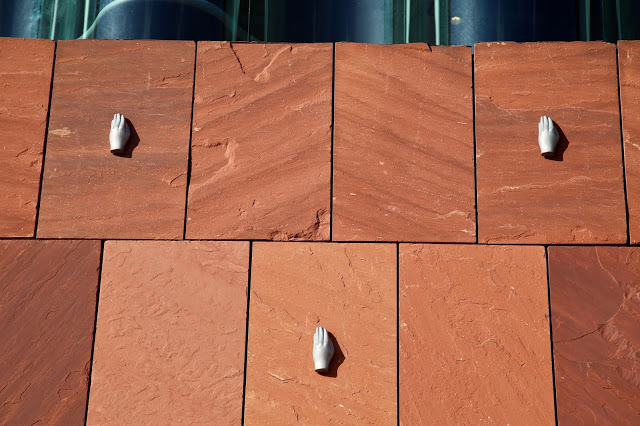 Antwerp is very proud of this horror of a building. MAS, an acronym for Museum An De Stroom, looks a lot better close up. From a distance it resembles a rather large red brick Barratts starter home. The idea was to create a people’s space in the old industrial part of town, where the docks were, with an open-all-hours access staircase, wrapped around the outside of the building, leading to spectacular views from the roof. Naturally this was abused by drunks and homeless so they closed the stair. It’s a long windy walk over there but I didn’t have time to look around inside. 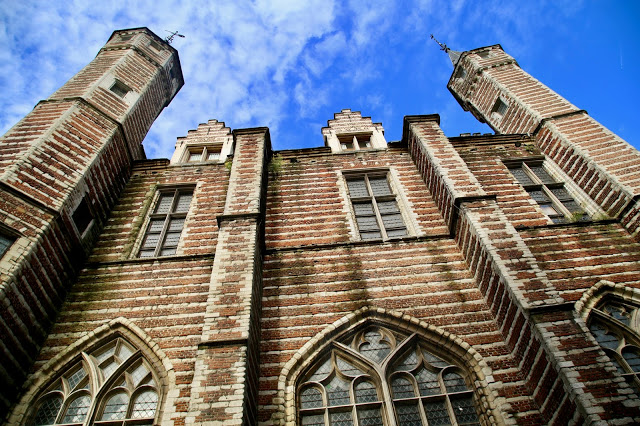 Blood mountain is the gruesome name for the area near a church-like building, the Vleeshuis, (the red and white brickwork is called ‘bacon layers’), where animals were slaughtered for the meat market. It’s now a museum for musical instruments. 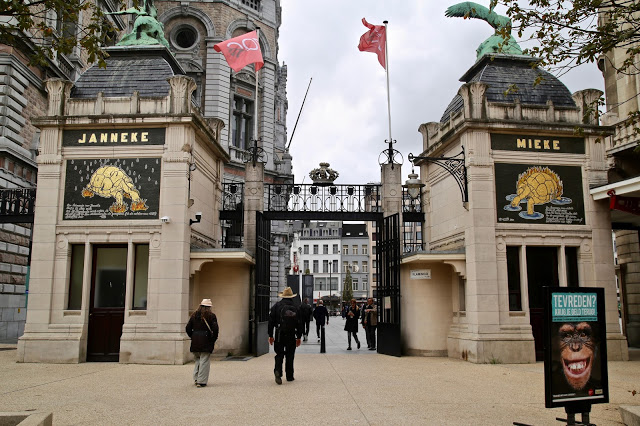 Antwerp must be one of the few capital cities where the city zoo is bang in the centre, next to the central station. The entrance has two large pillars with golden mosaics of turtles and bronze verdigris animals guarding either side. It’s quite pricey to visit so I didn’t. Nice though. 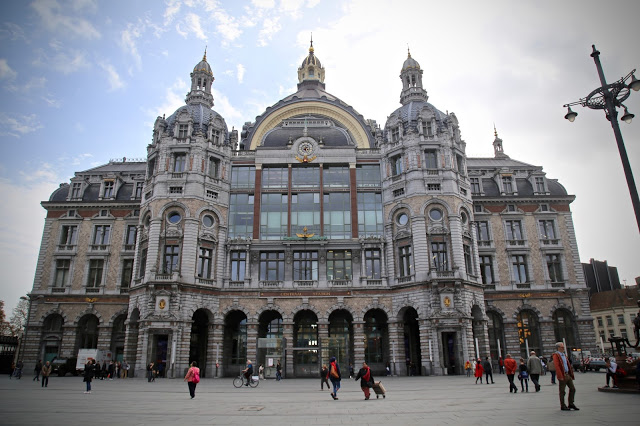 Both the interior and exterior of this enormous building is spectacular. If you want to make a grand entrance into Antwerp, go by train. You can get the Eurostar to Brussels and change for Antwerp. 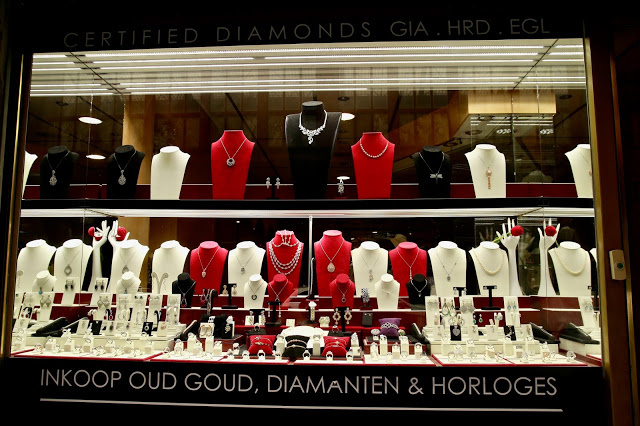 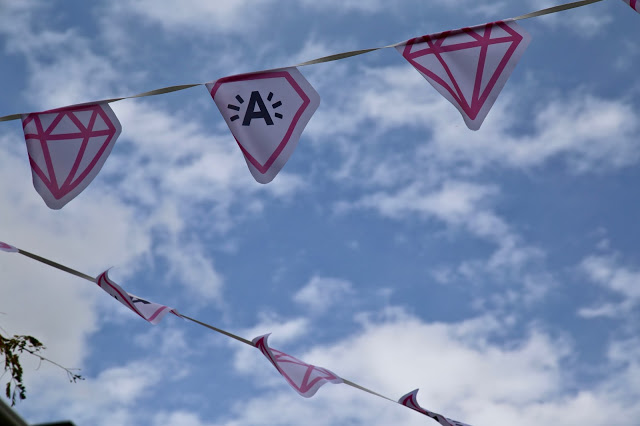 The diamond district in Antwerp is the world’s largest. I was amused to read about the diamond heist in 2003 where an Italian burgler rented an office and stole 100 million pounds worth of diamonds from the basement. He was caught by the DNA on his left-behind salami sandwich. All very Mission Impossible. 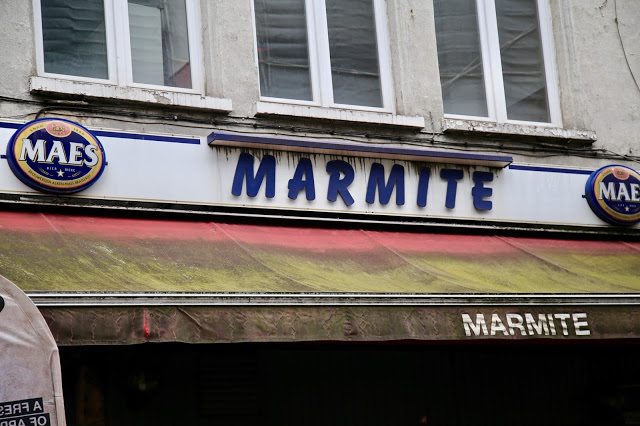