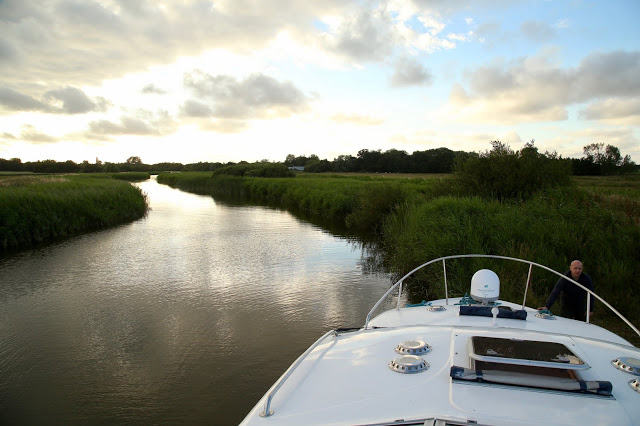 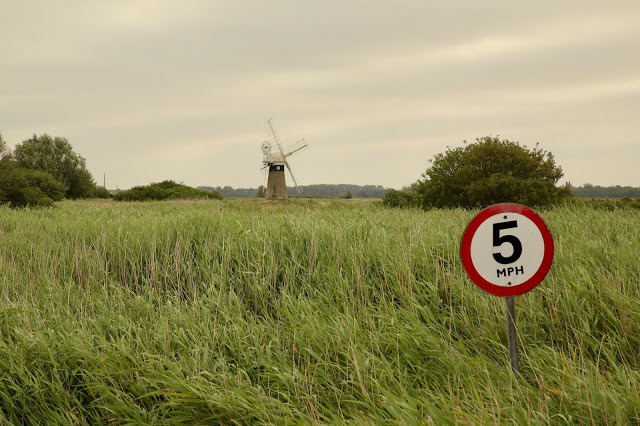 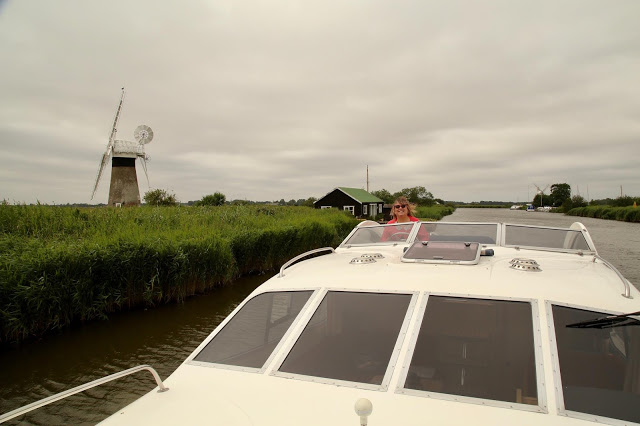 Norfolk is where the North folk live, in the flatlands under the big sky.

“It’s just like Holland” said Jim, my mate, who had come with me to Herbert Woods boatyard, to rent a boat.

Windmills broke up the windswept horizon.
We had arrived two hours late. Whatever Google maps says, double the time. So many roundabouts.
We had minutes to learn about mud anchors, hooks, ropes, knots and how to drive a bloody great boat when you’ve never done it before.
And parking! or mooring as it is more properly known. It’s not like a car. You use thrusters, the current, the tide, and finally very slow power-steering to back into a space. 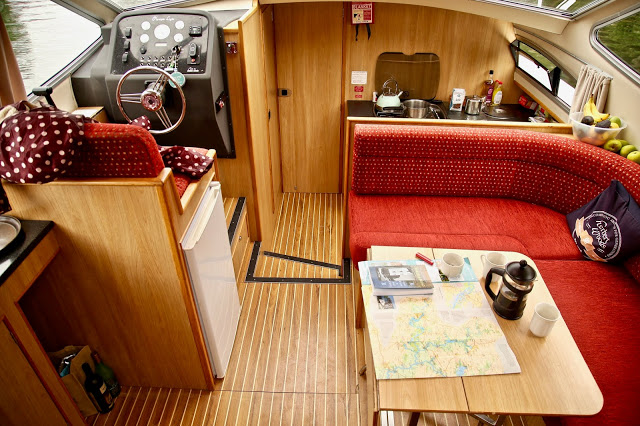 I’d packed enough food for weeks. London has been sweltering, so desiring freshness, I went overboard on the fruit and veg. For the first night I packed some ‘easy’ luxury food: a bottle of Sacla truffle pesto and some egg pasta Pasta Di Aldo.
This took only minutes to knock up.
These boats have a satellite TV, so we didn’t even have to miss out on the World Cup and Love Island
The first night we camped wild, not at a proper mooring. We stuck hooks in the mud and twisted the blue nylon ropes into figures of eight around the cleats, fore and aft. It held for the night.
There are speed limits along the broads, 4mph, 5mph, and a maximum of 6mph. When driving you are advised to look behind you,  to look at the ‘wash’. Going over the speed limit damages the banks of tall rushes. If you come across a yacht you must slow right down and cut behind them. You must drive 3 or 4 hours a day to charge up the battery.
We watched as sunset glowed orange and grey over the reeds; ducks flew slowly overhead. 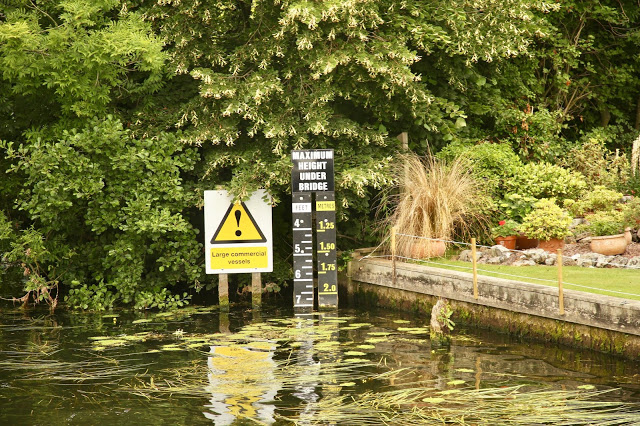 I was woken by the sound of swans ‘coughing’.
I tried to remember how to use the pump toilet.
Today we headed under a dark sky towards Wroxham: we want to be near a good pub with a big telly for tomorrow’s World Cup final. It’s coming home but we are away.
My first time backing into a mooring was hairy: two fisherman with cups of tea stayed calm as I moved perilously to within inches of their boat.

“It’s not our boat” they laughed.

Along the way, we peered at thatched houses with sooty beams and decorative herringbone ridges. Thatch used to be a sign of poverty, but is now a badge of the rustic middle class country house. A well-constructed thatched roof will last 50 to 60 years. Norfolk reeds are used for thatching in the broads, and are famous for their quality.
In medieval times, wheat was also used, being very tall, around six foot. Our present day digestive problems with wheat are a result that it is modified to be short, to make it easier to harvest by combine harvesters. Tall wheat did not cause digestive difficulties. 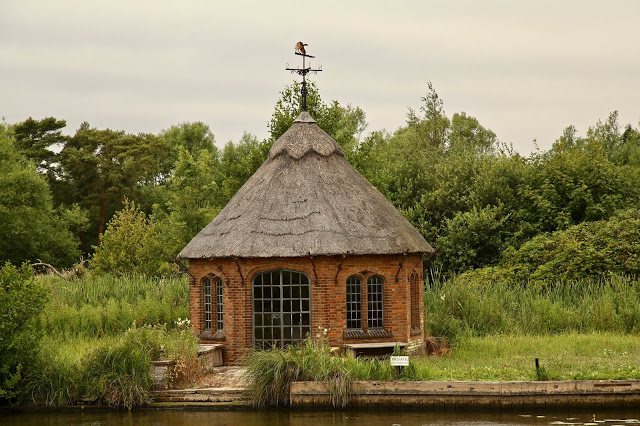 Tonight I made water spinach with rice noodles. 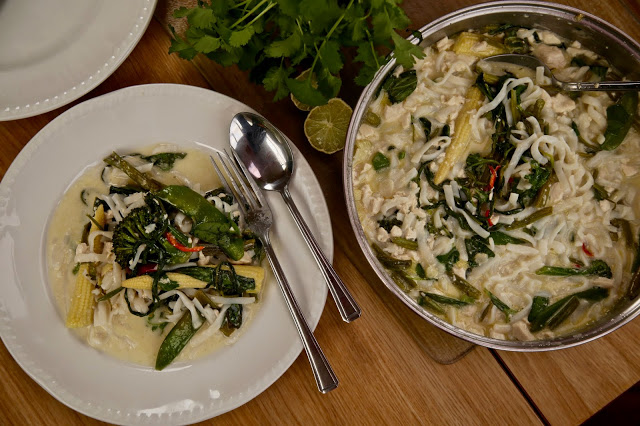 Every morning we check the oil, the water and the ‘weed’ filter.
Most moorings are free, some cost £3 to £5 for the night. There are places to top up with water or to empty the bilge.

The kitchen is well equipped: sink, 4 ring gas hob, small fridge/freezer. You have everything you need.
There are two bedrooms, prow and stern and a sofa that can be turned into a bed.
You need at least 2 adults: one to be skipper, the other to be able to jump off and cast off or on (or is that knitting?). 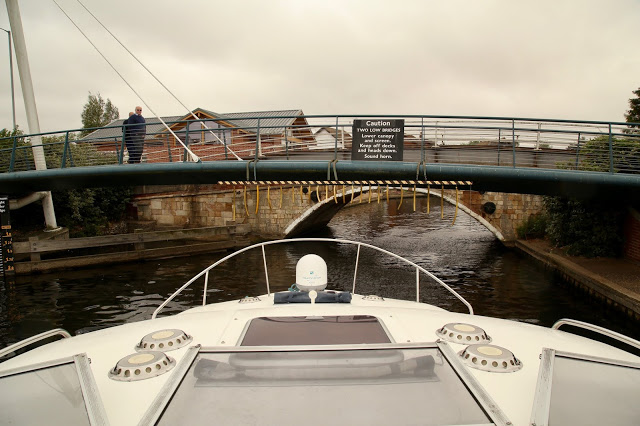 The boat is quite easy to drive, but we almost had a mishap struggling to fit under the mouse-hole bridge at Wroxham. We were told of one bridge where we’d have difficulty, but it wasn’t this one. As we neared the tiny humpback bridge, I realised we wouldn’t fit. A boat coming the other way pushed forward and a man shouted at us:

‘I’m a pilot. You should read your handbook.’
‘I did’
‘You should  know that you can’t fit under this bridge’

In the end I lost my rag and called him an “arrogant twat”.
We turned around and moored, £20 overnight, at Wroxham Hotel. The phone rang.

‘Did you try and go under Wroxham bridge?’ Herbert Woods queried.

News travels fast. I expect the arrogant twat pilot grassed us up.

Our boat, Olympic Light 1, good for cold weather, is very warm when the sun is out. It was blazing hot. England flags fluttered on many boats and from people’s fences and windows.

Wroxham village is small but contains a Macdonalds, a couple of expensive charity shops and several shops called ‘Roys’.
At a department store called Roys, I did some shopping.
Speaking to myself I announced aloud my shopping list:

Two women giggled.
Roys is like a 1950s department store. The underwear department had large bras, full girdles, firm control pants and petticoats. Proper.
It’s been open since 1895 and calls itself ‘The world’s largest village shop’.

At the Kings Head pub, we asked if we could reserve a table for the World Cup semi-final that night.

‘Sorry, all booked up. Get here by 4pm to fit in’ said the barman. ‘Everyone will be coming here straight from work at 5.’

England are playing Croatia in the first semi since 1990. I remember that semi-final, I watched it silently in Argentina. The English weren’t terribly popular at that time, so I kept it quiet.

When you cook on a boat you have to think of energy as well as ingredients: I’m making black bean soup. You don’t have to soak turtle beans but I did, to shorten cooking time. I then brought the beans to the boil and put on the lid, putting it down to a simmer for half an hour. Later, when we return from football, I can light up again and simmer for another half hour. This way, I reduce 2/12 hours cooking time to 1 hour. 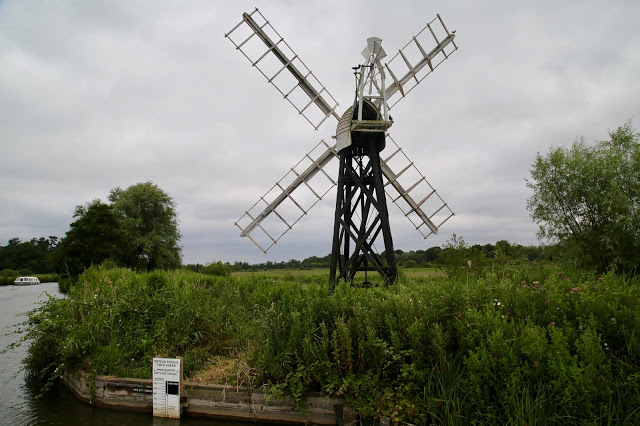 We watched England at the Kings Head. We saved our seats from 4pm and kick off was at 7pm.The barman kept saying it would be packed. By London standards it wasn’t.

Behind us stood 2 young white men who frequently boomed “Bastid”.
Then a chant would start from one end of the pub to the other in a round like Frere Jacques.

While waiting for the game to start, Jim quizzed me on football.

‘You actually know quite a lot about football’, he said, which pleased me. ‘Most girls don’t even know who Pele is,’ he added.

I remember Gazza crying as he got a second yellow card, knowing he couldn’t play in the semis. They’ve stopped that now. They used to reset the yellow cards after the last 16. Now they do it at the quarter finals.
I realised I’d stopped watching England in the World Cup for the last few years as it was too painful. The penalties killed me. It was actually too stressful.
Wayne Rooney’s piggish antics put me off: a wealthy footballer who didn’t seem to care about his country only his huge salary.
I remember seeing Michael Owen at 18 soaring over the grass, playing young and free while he had no pressure on.
I remember Wayne being like that too, before he turned into a bloated multi-millionaire. 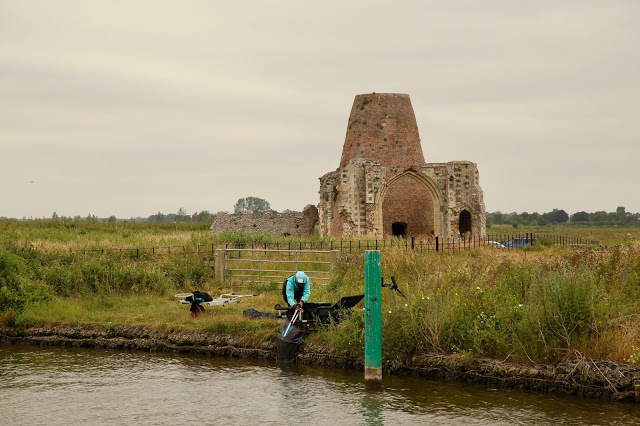 The minute I saw the Croatian team come out, my heart sank a little. This team was formed of men, hardened soldiers, mohicanned vikings, against ruddy-cheeked boys.
Play your little hearts out, I whispered to England, don’t hold back, you’ve nothing to lose.
Trippier scored an early goal at 5 minutes. It seemed too easy.
It was.
The second half saw Croatia determined to equalise.
Extra time and Croatia were up two goals to our one.
The pub was silent- trying to stymie the grief which was sure to come.

Me too.
Once that happened, the delaying tactics by Croatia were in full force: walking to the other side of the pitch when you know you are going to be substituted, walking as slowly as fucking possible back, literally pigeon steps. Making every throw in or corner as slow and inept as possible. Stretching and shrinking time.

The pub was half empty by the end. The spirit drained out of us quietly.
When we got back to the boat, we realised the TV didn’t work. The power had run out. I called the engineer, who confirmed this.
I thought I misheard at first, but several times he called me ‘my woman’. You need to charge up for six hours. He mentioned my bridge antics:

‘We saw that on webcam’

Sad and disappointed, Jim and I watched a shit film, ‘Love Simon’, by candlelight, until the power on the laptop ran out.

Having sunk a rare three pints of lager, I went to bed.

Slept like a baby. Awoke naturally at 8 am. Quick cuppa then must leave before 9 am from this expensive mooring (£20! and no facilities)
For breakfast I made mushrooms on toast. 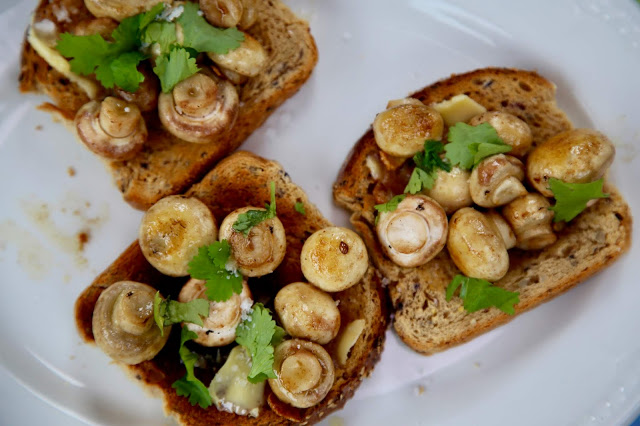 It’s cloudy and overcast but not cold.
We drank cups of tea while driving up top. There are two driving positions: inside and on the top. On the top you can see better. You only go inside for bridges and rain. 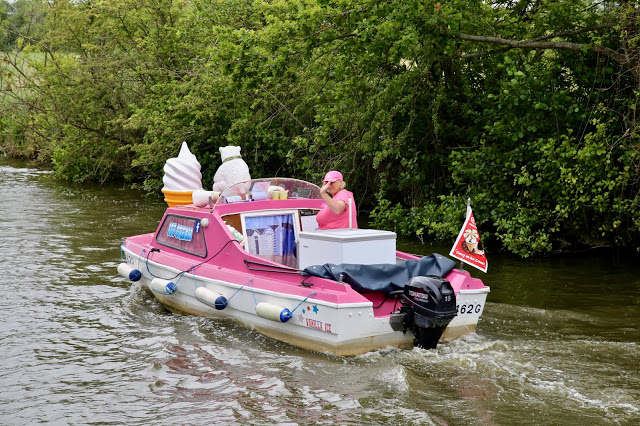 We passed a police boat, a steam boat with a copper chimney and an icecream lady boat.

We made our way to Stalham, and visited the Museum of the Broads.
The Norfolk broads are not natural but the result of peat and reed harvesting. Norfolk reeds make the best thatches for grooves. The broads date from Viking times (even Ragnar Lothbrok was in the area).
Whole families used to make their living on boats. There is a replica of a wherry, a passenger carrying Norfolk barge, with a tiny Aga style oven.

Once charged up at Richardson’s boat house, we drove back towards Potter Height. We moored in a wild place a couple of hours from Herbert Woods boatyard. We have to bring back the boat by 9am Friday morning. Orange-billed ducks seemed unfazed by their new neighbours.
In the distance was a drainage mill.
We feasted, rather too much, on a Middle Eastern style meal: chilli halloumi, falafel, Norfolk new potatoes basted in butter and coriander, hummus and chilli sauce. I also made a Norfolk apple pie from Bramleys, which didn’t look pretty but tasted great.
Jim and I were tired and went to bed after Love Island.

The alarm went off at 7am but I couldn’t physically get up for another half hour. Jim made thick doorsteps of buttery Marmite on toast. It took three pots of tea before we made it back to the boatyard.

4 nights for 2 people at peak time costs £653 for the boat, plus £45 insurance and fuel.
Book through Herbert Woods.

Previous Post: « Summer recipe: tropical fruit with Tajin and lime in a watermelon bowl
Next Post: Festival food through the decades and the Latitude festival food roundup »