Since the Brexit vote and the resulting downturn in the value of the pound, I’ve been spending more time in the UK. This year I took acid for the first time in Cornwall (oh yeah forgot to mention that in the post), drank whisky in Oban, floated about on the Norfolk Broads, ate vegan in Stockport, ate puddings in Aberdeenshire, and walked around Winchester (to come). In early September I finally visited the city of Durham.

Durham is famous for the cathedral, the Hogwarts courtyard, Saint Cuthbert, The Venerable Bede (religious historian), the mines, the university, and the North Sea.

A tenth and eleventh century Anglo-Saxon church, Durham Cathedral has been used for both interior and exterior shots of Hogwarts in the Harry Potter film franchise. Behind the altar it houses the remains of Saint Cuthbert, a seventh century patron saint of Northern England. If you watched The Last Kingdom TV series, Cuthbert was one of the saints revered by Alfred The Great, and a symbol of a united England.
In the seventh and eight centuries,the ‘Venerable’ Bede wrote a history of the English which included St. Cuthbert. He taught and translated christian concepts to the Anglo-Saxons during the so-called ‘Dark Ages’. It was Bede’s idea to use the prefixes ‘BC’ (Before Christ) for dating history. His relics are also buried at the cathedral.

Practical tip: if you are driving to Durham, you need to park in one of the municipal carparks as the historic centre is paved. I know, I tried. There is no parking in the city.

The weather was drizzly in typical Northern England style. There are crooked streets, rain lashed cobbled paving, leaded glass windows distorted by time, little wooden shops and doorways. The cathedral and the castle are set upon a steep wooded peninsula, the river Wear coiled around the city. This is a characterful university town.

Once a year, in July, Durham hosts the Miner’s Gala, a nod to the long tradition of mines and worker’s unions in County Durham. You can see a colliery banner in the cathedral. Coal was mined from medieval times, but many were shut down after World War 2. The death of mining was hastened in the 1980s under Margaret Thatcher and last Durham mine closed in 1994.

On the outskirts of Durham, I visited the 13th century Crook Hall, a medieval house and gardens that has been refurbished by the Bell family. Despite the rain, the gardens were particularly beautiful, with outdoor ‘rooms’ displaying an apple orchard, a herb garden, statuary, wild sections and a maze you could actually get lost in.

The house was atmospherically spooky, real fires and candles were lit, and I’m sure I felt the prickling presence of a ghost. You can wander around the different rooms from the medieval hall, the Jacobean and Georgian rooms. At the bottom of the maze, I enjoyed a hefty afternoon tea with home-made cakes at the Garden Gate Café. That’s the thing about the North, they don’t muck about when it comes to portions. 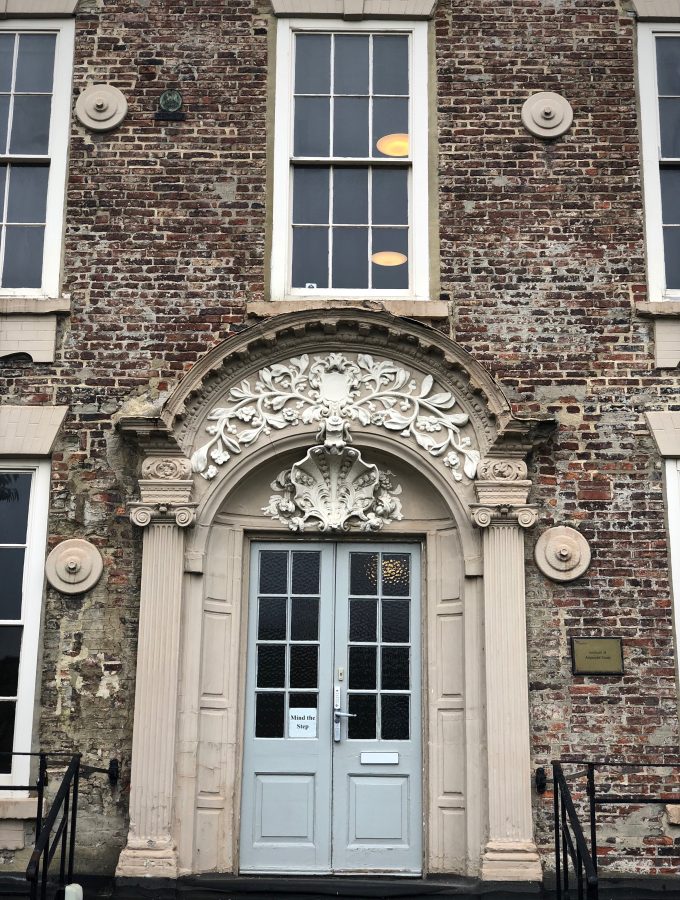 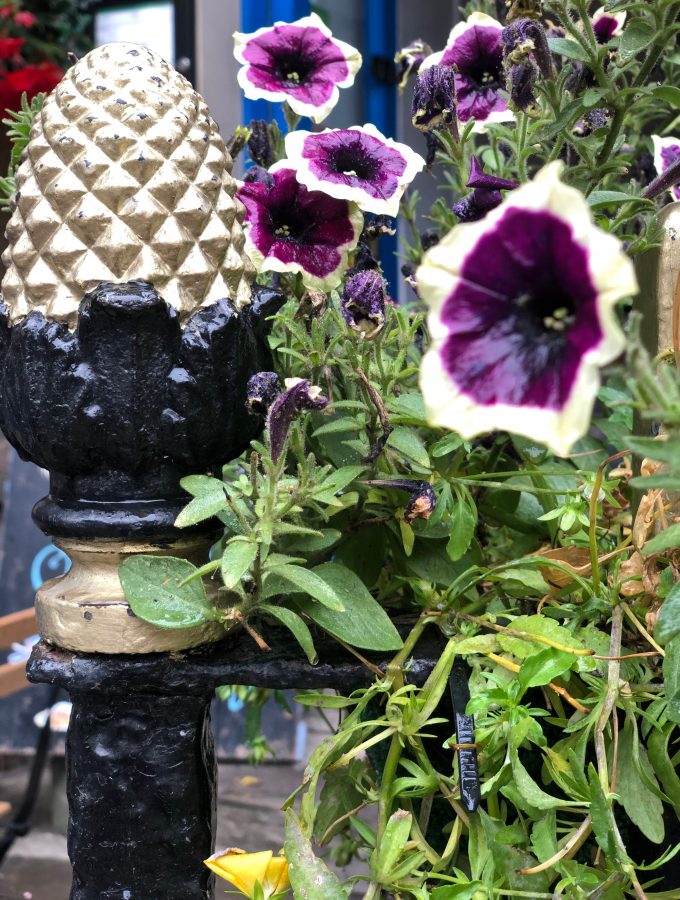 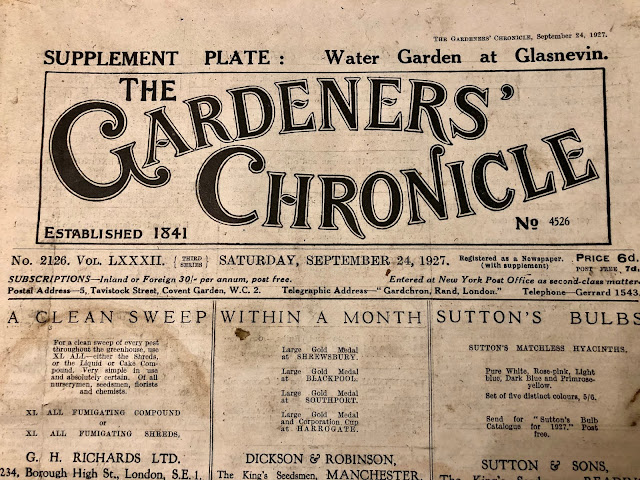 The North Sea is rough, cold and wild. Seaham is one of those old-style British seaside resorts where you will need an anorak in the middle of summer. I ate a Durham ‘stottie’, a kind of bread roll with a vegetarian sausage for breakfast at the Seaton Lane Inn.

Seaham is famous for ‘sea glass’, a legacy from housing Britain’s largest bottle factory. The broken bottles are tumbled about in the rough seas, and end up as delicately coloured glass pebbles of varying sizes, usually in turquoise, jade green, blue, yellow and occasionally pink or red. Sea glass collecting is a world-wide hobby, and I saw quite a few families bent over and sifting through the gravel. 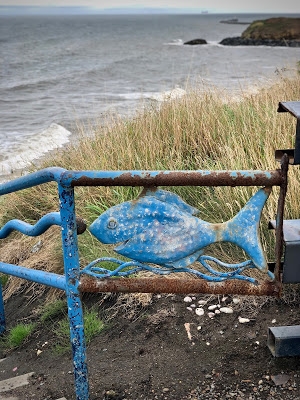 The parade of shops in Seaham seemed to date from the 1960s: ice cream parlours, old fashioned sweet shops – windows crammed with tall confectionary jars which you buy by weight – and all-purpose stores which sell both wool and newspapers, fruit and veg. I did see poverty though, evident in people hanging around the streets and the run-down nature of local housing. This is a Brexit voting area and I could see why. People looked unemployed, many of the shops sold second-hand goods. Government spending has halved since 2010 and the transport budget for the North East of England is five times less than London.

But there is money in the North East, evident when I stayed at the rather grand Rockliffe Hall, a few kilometres south of Durham. There is a spa, a golf course and a very good restaurant L’Orangery, in a greenhouse-style dining room. I ate one of the best tasting menus I’ve ever had, despite the fact that, and believe me this is a rare accolade, it was vegetarian. The kitchen is headed by chef Richard Allen, much of the produce is picked from the kitchen garden at Rockcliffe Hall. Allen and his team are doing all the pickles and fermentations so influenced by current food trends, but, and this is the point, they are doing it very well.

A tasting menu costs £80 and the wine pairing costs £60. The food was accompanied by an original and interesting wine selection by charismatic Swedish sommelier Daniel Jonberger.

I increasingly think going for the wine pairing in posh restaurants is a good idea, even if only one of you has it. (I did this at The Ledbury, and shared my tasting glasses with the rest of my table, bit cheeky but they were fine with it). In this way you get to try a variety of interesting wines that you would never pick yourself – it expands your knowledge – the sommelier will explain them all- and costs you less in the end.

After my wild walk along the brisk sea front, I visit the elegant 18th century Seaham Hall, which has had a rather checkered history: it’s been Lord Byron’s family home, a military hospital, a whisky bottlers, a tuberculosis sanitarium and is now a five star spa and hotel. Sadly I didn’t get a chance to stay there but I did have a delicious Pan-Asian lunch. I was surrounded by posh Mackem or Geordie women at the other tables, done up to the nines, while wearing white towelling bathrobes. Women from the North East of England are very beautiful: all chiselled features and silhouettes, influenced, I’m sure, by their Viking heritage.

I was hosted by Visit Durham.