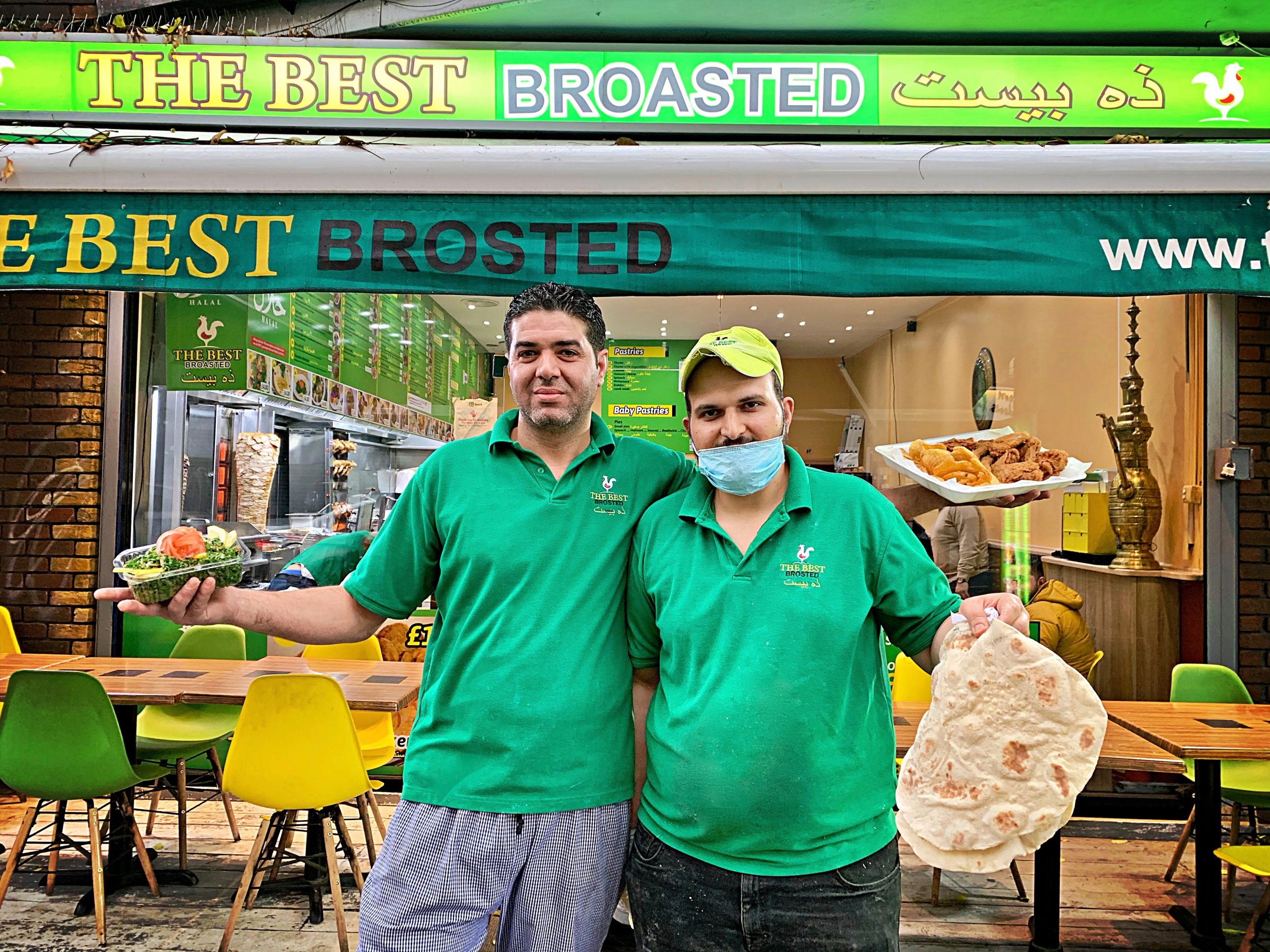 Refugees are once again in the news with the tragic deaths of three children, a whole family, just off the coast of Calais.

Four years ago a Syrian family moved in upstairs from me. I remember Medyan Al Dandan, the father, when he arrived with his wife and four year old daughter. They barely spoke English and they seemed stunned, pole-axed by the change of culture. Medyan left Damascus when his wife was pregnant. He’d never seen his daughter, having waited four years for permission for them to come over and join him. He told me he could not practice as a lawyer in the UK but retrained to become both a chef and an electrician. I’ve never seen a man work so hard for his family. Within a year I could converse with them easily in English, they settled and bloomed as a family, adding another baby. Gradually I got to meet the extended family. 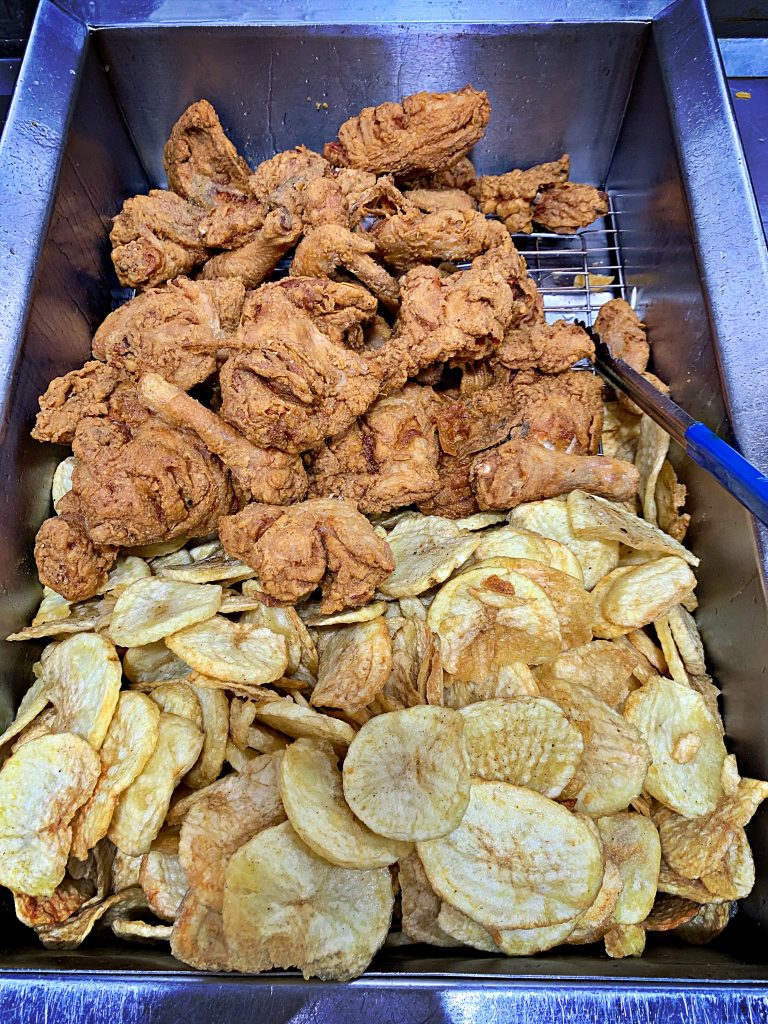 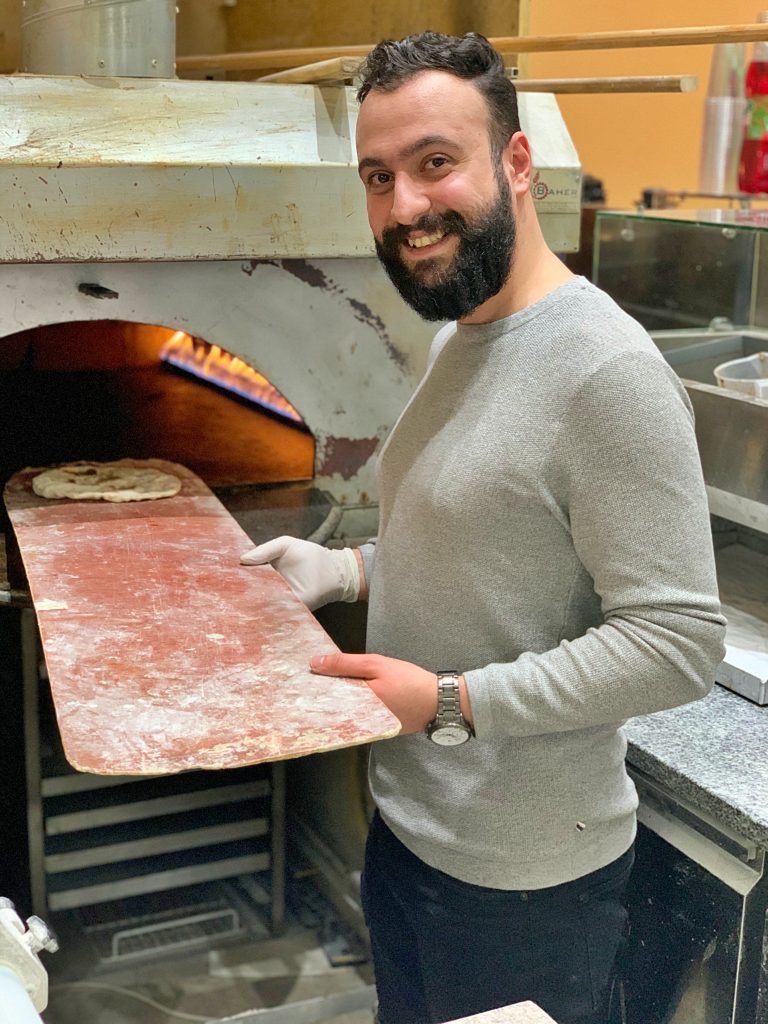 His brother-in-law, Amer Kawaret, owns a Syrian restaurant in Willesden Green called The Best Broasted.  All of the employees, from the owner to the chefs and servers, came over from Syria, escaping from the war. They’ve been through hell to get here: surviving a month lost at sea, paying off gangs to smuggle them onto lorries and filthy, dangerous, freezing conditions in refugee camps.

The Best Broasted is gaining a reputation as the best Syrian restaurant in the UK. On both of my visits I’ve seen Syrian families who have travelled from the other side of London and from as far as Reading to come and eat the food.

“It’s the nearest to eating in Damascus” said one family. 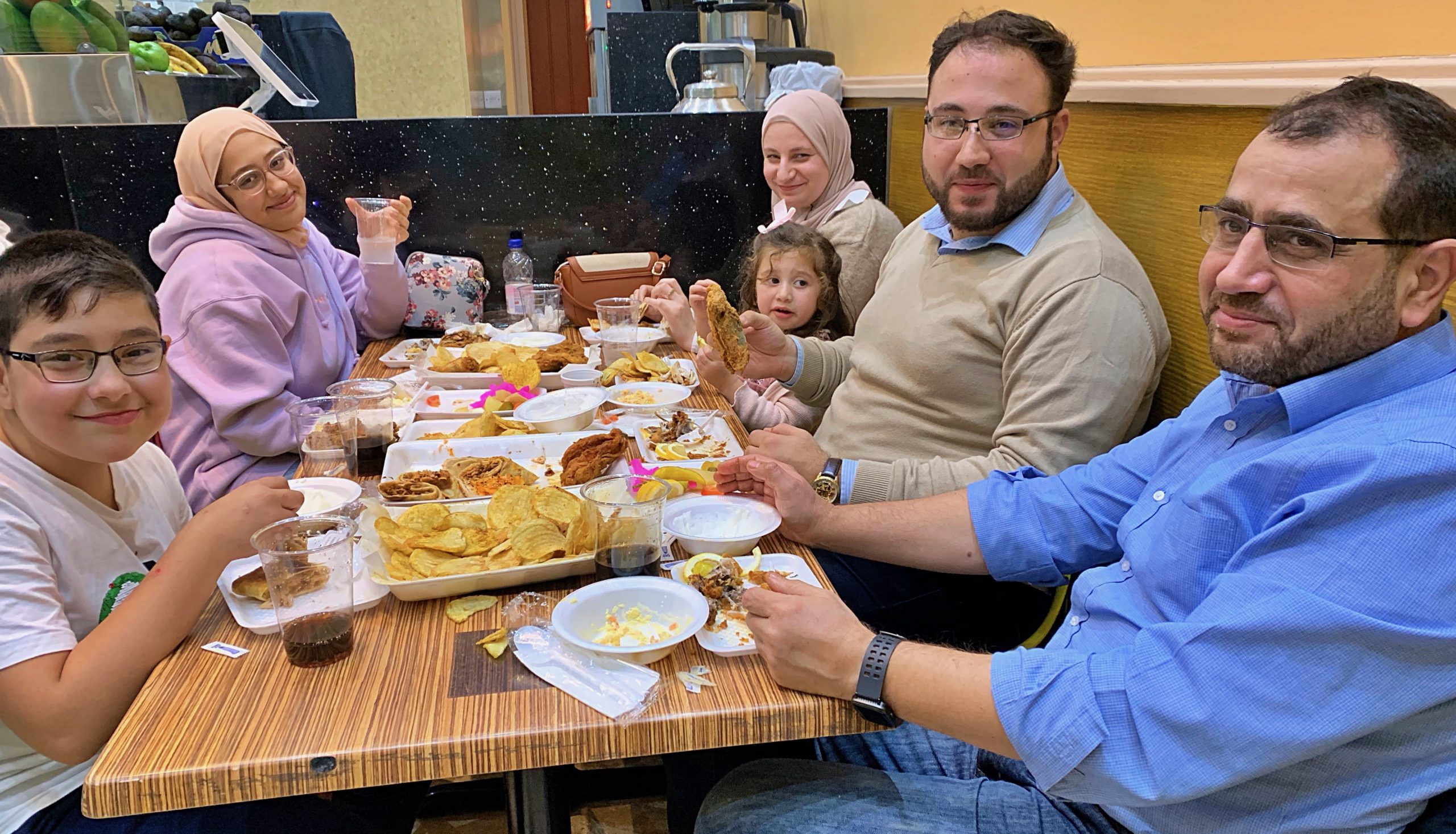 The titular dish, broasted chicken, is a Syrian speciality using a special machine, a kind of pressure cooker full of oil. The chicken is marinated in a secret herb mix (they wouldn’t tell me what) then deep-fried at 180Cº while a lid is screwed down on the vat of bubbling oil. It looks slightly terrifying. “But it’s so juicy” explains Medyan, his thick dark eyebrows lifting with passion. This is served with thick game chips and another Syrian speciality ‘Toum’, a garlic sauce.

Vegetarians need not worry, they also serve tabbouleh, moutabal, halloumi and falafel. Every meal is accompanied with tangy pink and green pickles and ‘Toum’. A dark-haired smiling baker stands all day next to an oven, rolling out flat breads and peeling them into the flames so that they puff up into footballs of dough, charred around the edges, sometimes filled with garlic or cheese.

I sat with Amer Kawaret over Syrian coffee while he recounted his passage to England. His English is very good, almost unaccented. He’s been here five years.

“When I finished my studies as a software engineer, I left for Lebanon. I could see the war was getting worse and I had a sister already in London and I already spoke English. I met my 16 year old brother, his best friend had been killed in the war, and we decided to make the journey across Europe to Calais. Sometimes walking, sometimes with transport.

In Syria we are taught that all arabs are our brothers but what I discovered is that what we used to call ‘strangers’, westerners, Europeans, Americans, are our brothers. We are brothers in humanity. Croatia had never had refugees before, black refugees. But on the day the Croatian border opened, at 3am, hundreds of Croatians, young, old, came to welcome us. In the freezing weather, they came in their cars, opened up their boots and gave us hot food.

When we got to Calais, the camp, we were shocked, it was so dirty and dangerous. There is no law. One guy promised to take us over to the UK that day. My brother said ‘No way can I stay even one day here’. But we ended up staying 40 days. It was the hardest 4o days of my life. We were waking up during the night from the cold and then sleeping again from the tiredness, then waking up again from the cold, this is how we spent the nights.

One morning we woke up and they’d discovered a guy who got killed in his tent. We don’t know why, they found him stabbed, I think 20 times, in his bed, in his tent. 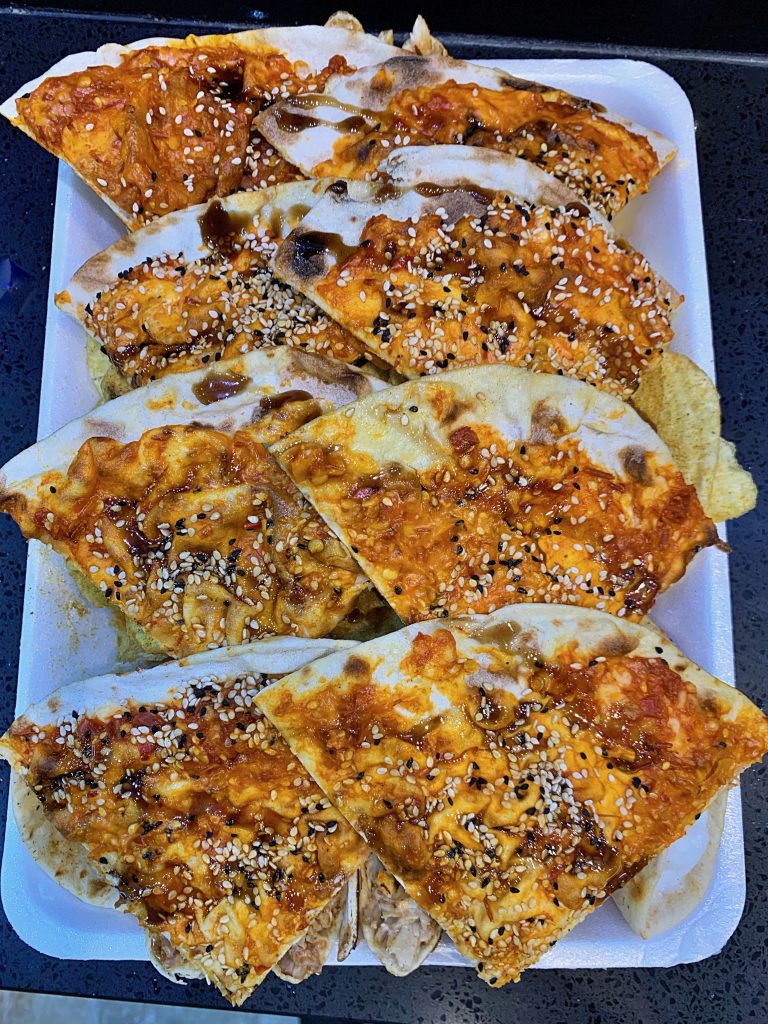 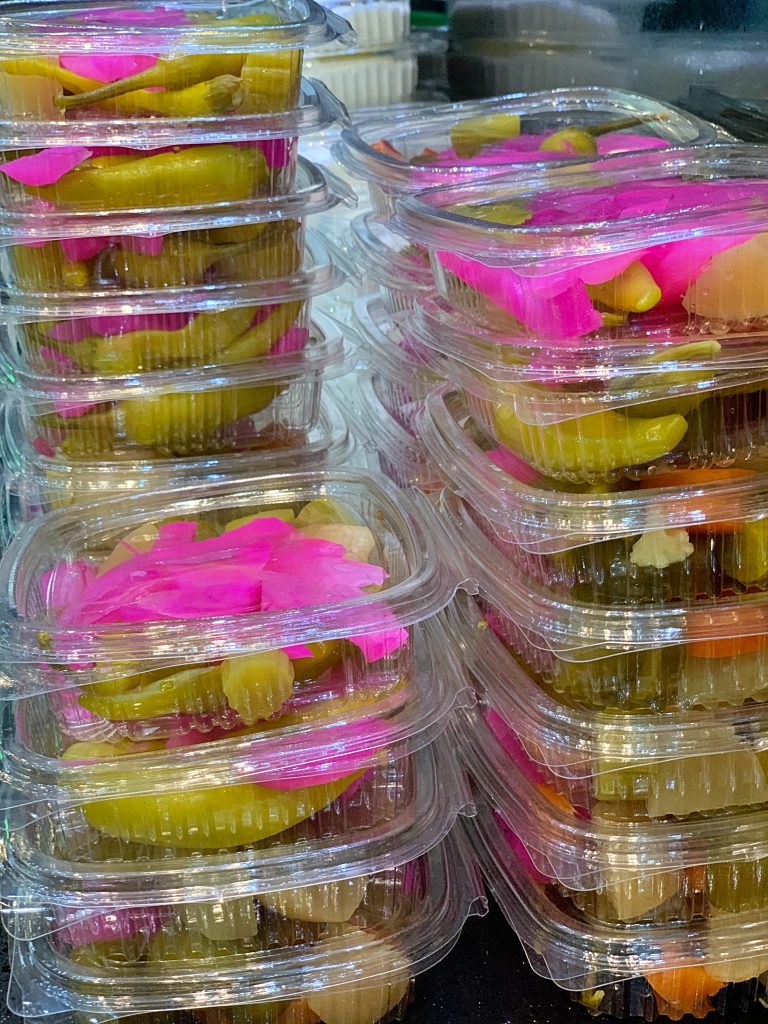 Syria is not one of the richest countries but it’s a developed country; as a young person in the 21st century, did you ever think I’m in a movie here? It must have been surreal.

If you look at pictures of Damascus before the war, it was a pretty good place to live. We had everything. I had everything I have here. It’s not that different.

How much did it cost to travel from Lebanon to Calais?

And from Calais to the UK?

It cost 7,500 pounds each. I borrowed the money. I managed to pay it back two years ago. We were on top of a lorry, brought here by Romanian smugglers.

When we got to Dover, my brother in law came to pick me up. I cried. It was finally over. He drove us to London and immediately showed us the sights, the London eye. Then I went to my sister’s and took a shower.

Sightseeing before a shower?

Amer laughs. Then we called my family in Syria, my mum started crying. They didn’t even know I was trying that day.

People in Syria are still suffering every single day. They line up every day for hours just to get flour for bread, to get gas to cook on. There are kidnappings, bombs, violence.

Yes but it’ll be twenty years before Syria recovers and by then I will have spent decades in England. 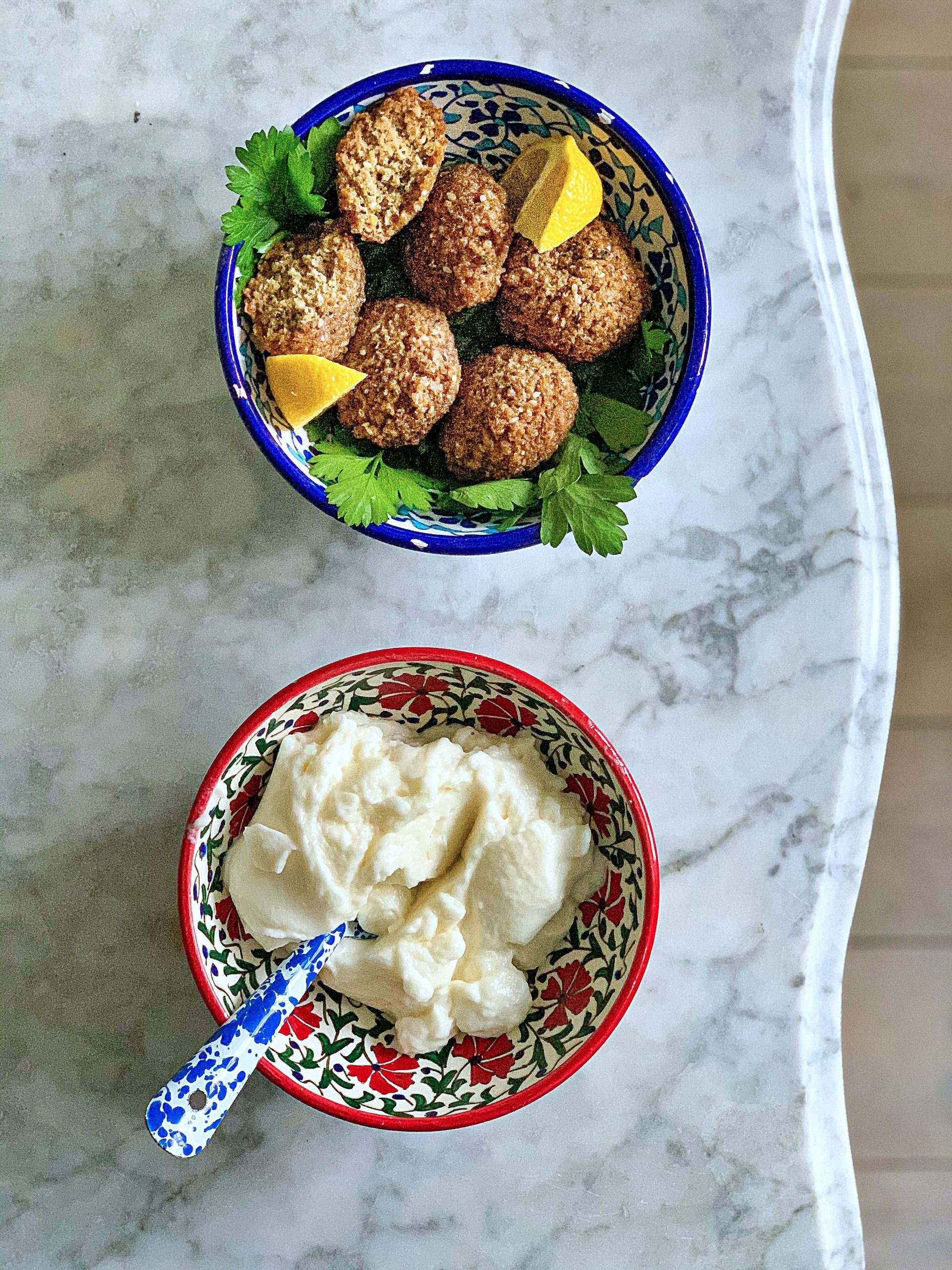 In Syria, they tend to make this with cornflour as a thickener, but I've created a version without. Drizzle the oil in very slowly so that it emulsifies. This is delicious. You'll want it on everything, including toast. The first time I made this I put in 3 whole bulbs of garlic cloves - it was really strong. But actually the garlic piquancy does soften over a few days. Nonetheless I've used a lot less garlic in this version. Keeps a few weeks in the fridge.
Course Dip, Sauce
Cuisine Lebanese, Syrian
Keyword Garlic, Middle Eastern cuisine, Syrian diaspora food, The Best Broasted, Toum 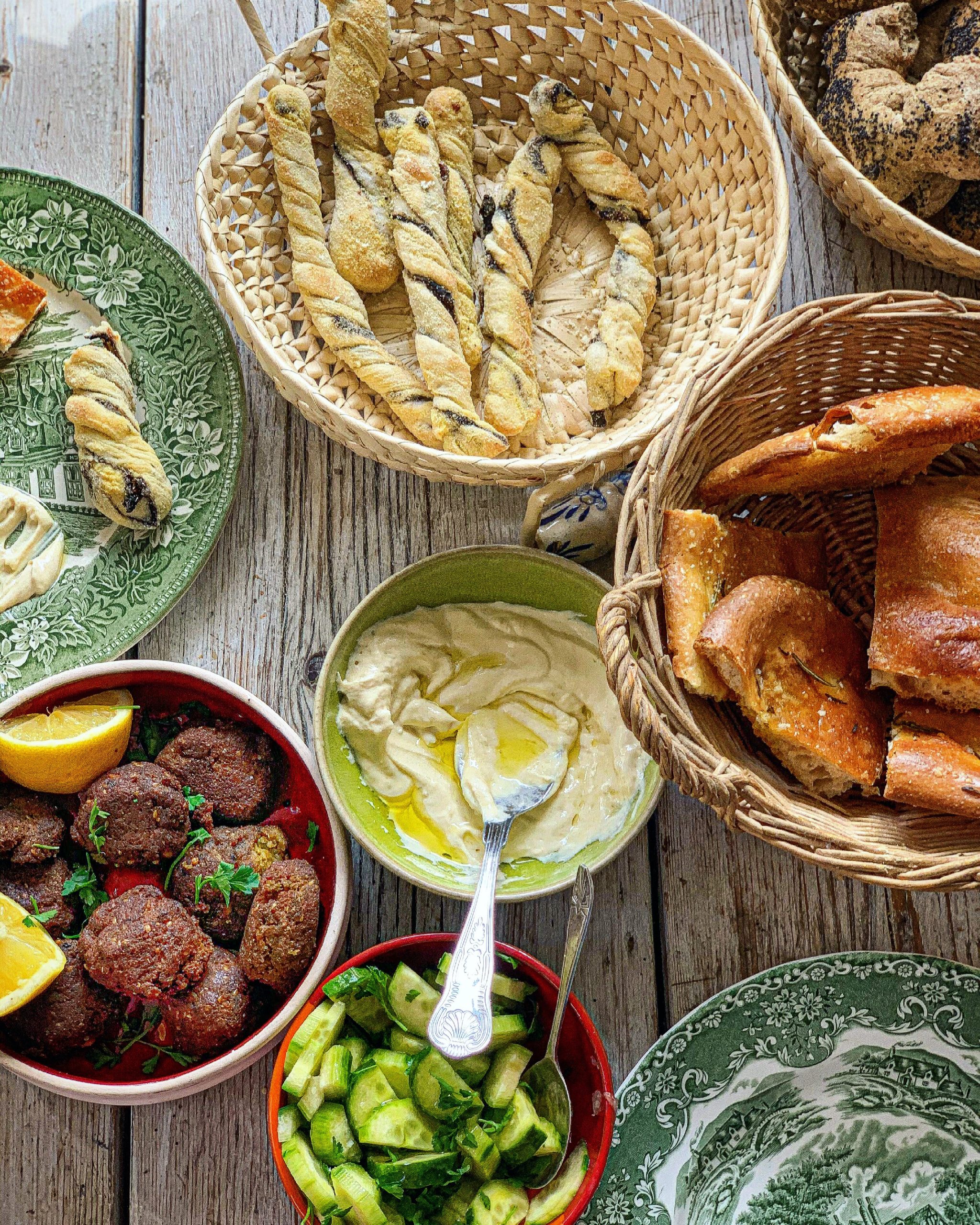 Almost every country in the Middle East has its own version of falafel. Syrian falafel are made with a mix of chickpeas and broad beans (ful mesdames) and sesame seeds.
Course Mains, Snack, Starters
Cuisine Middle Eastern, Syrian
Keyword Chickpeas, Falafel, Snack, Vegan, Vegetarian 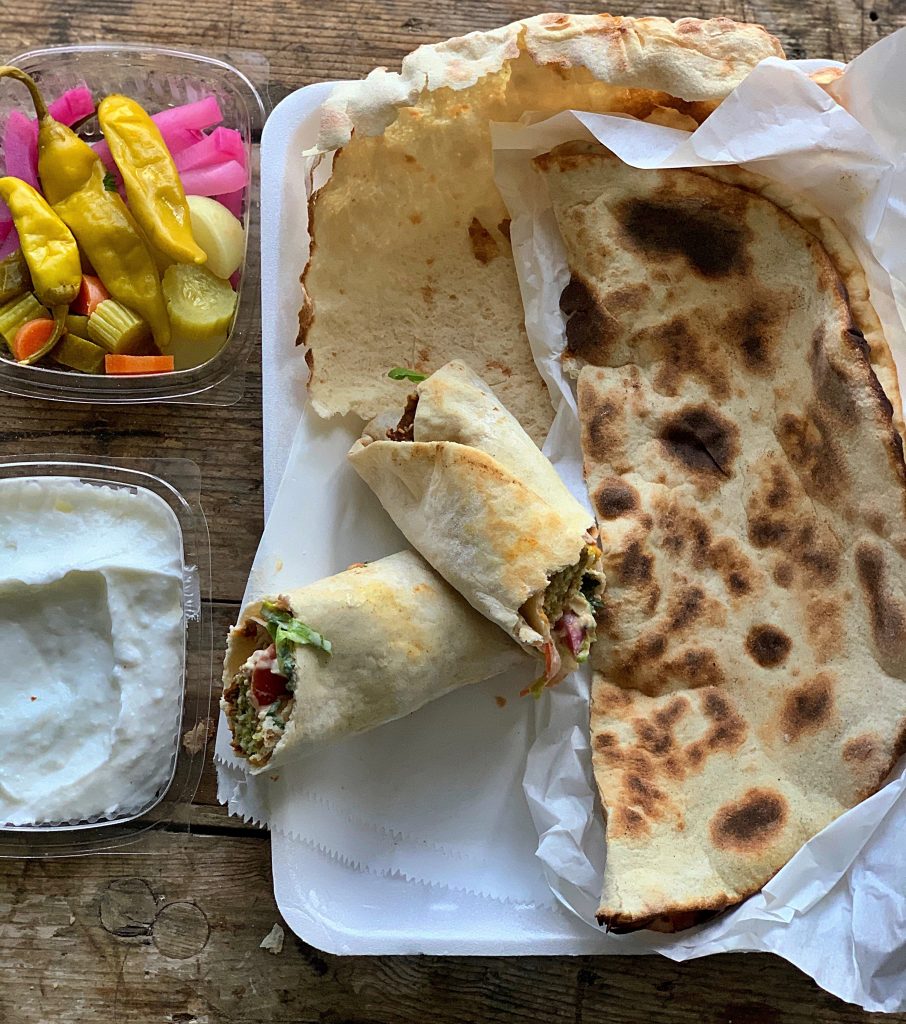