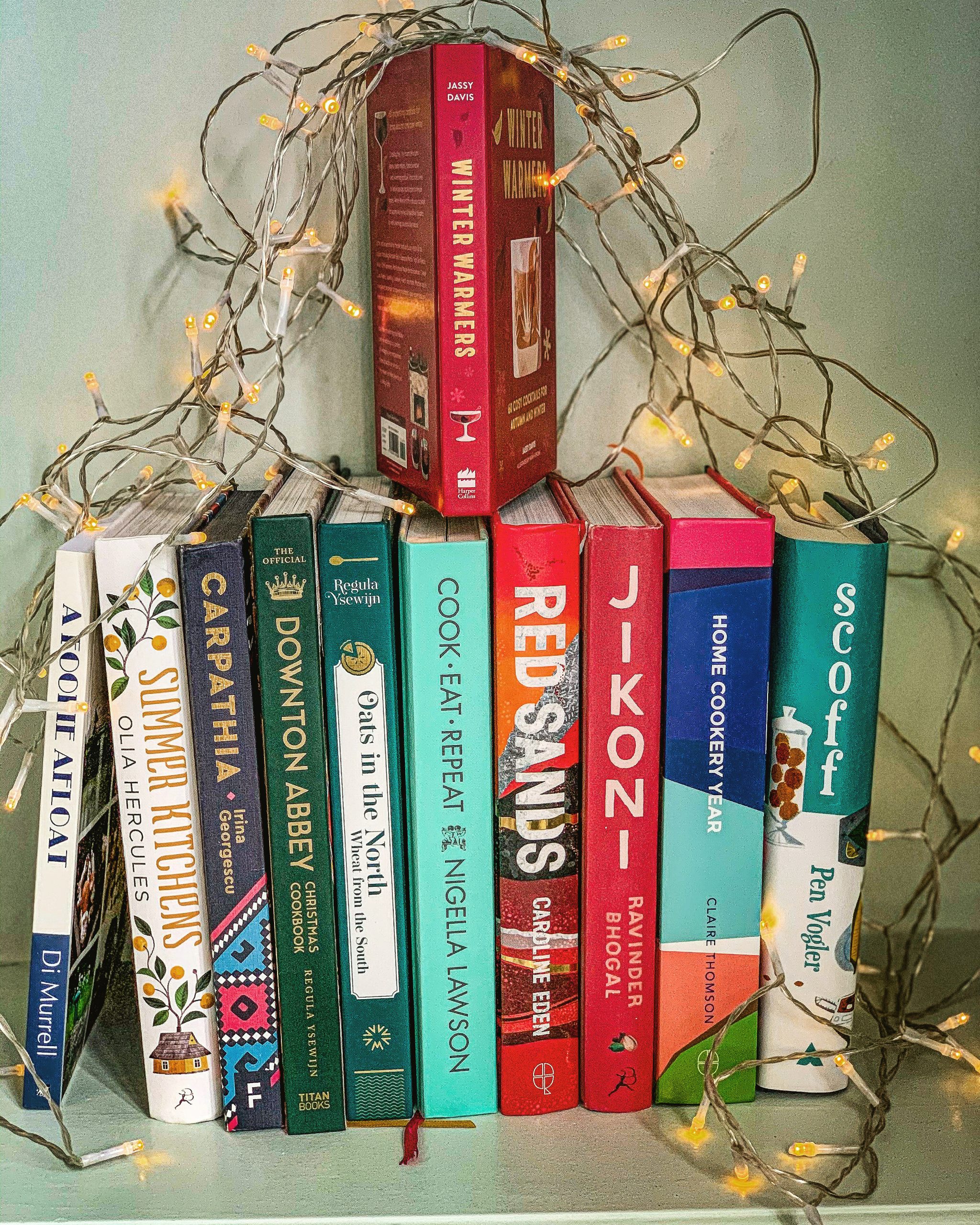 A stocking filler for the mixologist, this cute illustrated book, written with customary wit by Jassy, has recipes for mulled drinks, hot toddies, buttered rum, and Mexican hot chocolate with tequila. I discovered last Christmas how Baileys is an ideal substitute for milk in morning coffee. After the privations of lockdown, this book is a joyful paean to letting go over the holidays.

After a three year gap since her last book, Nigella reflects that: “It’s a strange thing to start a book in one world and finish it in another’. Written during lockdown, there is a contemplative introspection in her food essays on anchovies, rhubarb, the joys of brown food, Christmas food and the quotidian comfort of cooking. There is more writing and less recipes than usual, which for me is a treat as I simply love her writing voice. That said, I want to try the Basque Burnt Cheesecake and the Chocolate Tahini Banana Bread.

George Bernard Shaw was referring to accent when he said “It is impossible for an Englishman to open his mouth without making some other Englishman despise him” but he could easily be talking about food and class in the UK. Vogler’s thorough research as a food historian gives her the wide perspective to bounce through subjects such as restaurant trends, etiquette, posh foods versus lower class foods, ‘Golden Shred marmalade is declassé while Oxford marmalade is not’, at the same time remaining readable and entertaining.

Over the last decade cookbooks by Olia Hercules and Caroline Eden, amongst others, have thrown wide a window on the unfamiliar cuisines of Eastern Europe. Georgescu does the same here with Romanian food, a melting pot of influences from Turkey, Greece, Austria and Hungary.  Romania is still very agricultural and the food is highly seasonal. The hunger gap lasts from December to May (our is shorter- from April to May), therefore preservation techniques such as smoking and pickling are vital to last through the lengthy winter. The recipes, simple yet evocative, that I’ve tried work well; I’d like to have a go at the pickled gherkin ragout.

The folksy cover with a garland of yellow fruit, posted to me during Lockdown 1, this felt like the perfect cookbook for the season, when the sun shone day after day. The title refers to the separate outdoor kitchens that most people have in the Ukraine, adjacent to kitchen gardens where the fertile soil is known as ‘black gold’. Here families could cook and feast in the shade, and sometimes fruit trees would grow through the roof ‘the underlying intention to try and live in harmony with nature’. As in Romania, the harvest is an opportunity to  ferment, pickle and preserve; sour flavours are incorporated into soups, smeared onto rye bread, folded into salads or to enliven a casserole. There are several recipes for dumplings and fritters, lighter and subtler than you might imagine. The photography is atmospheric reportage.

After the award-winning Black Sea, Eden ventures into four of the five stans of Central Asia’s Silk Road: Kazakhstan, Uzbekistan,Tajikistan and Kyrgyzstan. Her books are for cooks who are inspired by travel; dusty overland journeys through desert scrubland, glinting oilfields and extreme temperatures of the Steppe. During lockdown, this reader was pierced by vagrant longing, the frustration of not being able to travel. Of the recipes, I want to try the Canned Peach and Sour Cream cake, Sour Cherry Borscht soup, and Prunes cloaked in Chocolate. Beautiful location photography by Theodore Kaye.

Oats in the North, Wheat from the South (Murdoch) and The Downton Abbey Christmas Cookbook (Titan)  by Regula Ysewijn

Regula Ysewijn, a presenter on the Belgian Bake-Off, is in love with British food history. She and her partner, artist Bruno Vergauwen, produce the most beautiful books. Every detail, design, photography and food styling is exquisite. The title refers to the crop division in the UK, similar to the wheat (north) and corn (south) split in Mexico and the butter (north)/olive oil (south) segregation in Italy. In the dedication, she acknowledges the debt that all bakers owe to slaves ‘sugar has a cost, and that cost was held by those in bondage’.

She also wrote and created the historical recipes for The Downton Abbey Christmas Cookbook (although while the photography and design of the book isn’t bad, it wasn’t by Regula and Bruno which would have improved it ten-fold. Nice endpapers though). Both of these books would make gorgeous gifts.

Jikoni means ‘kitchen’ in Kenya and Ravinder, like most restaurateurs, has had a tough year keeping her eponymous Marylebone restaurant going.  She’s a chef with a witty fusion touch, mixing Asian flavours with British home cooking. This book unfurls her fragrant and glamorous style with recipes such Coconut Kadhi soup with Pea and Potato Pakoras and Clams Moilee (a South Indian broth) with Lemon Vermicelli Upma (a noodle stir-fry) along with memories of her upbringing and family. Despite the exotic names, the recipes are easy.

This thick tome is a good present for the neophyte but adventurous cook, containing 200 recipes split into four seasons. Often using pantry ingredients, it’s a welcome and useful update to Nigel Slater’s Kitchen Diaries. Stuck for dinner ideas? Turn to Winter and make a Miso & Mustard Butter Baked Potato, or Crumpets with Eggs Arnold Bennet or a Sardine Pasty.

Another travel inspired cookbook from Di Murrell who spent years on a slow barge through the waterways of Northern France, foraging, market grazing and boozing. For all of us who have been stuck indoors for most of this year, ruminate and nibble your way through recipes such as Tarte Maroilles (a stinky Chtimi cheese), Camembert in Puff Pastry and Pears with Roquefort.

The Vegetarian Kitchen by Prue and Peta Leith (Bluebird)

I was pleasantly surprised by this cookbook as I usually don’t like books by TV chefs. I always assume they are ghost written. But Peta Leith, Prue’s niece, is obviously an upcoming talent in food writing. I loved both her recipes and some good old favourites from veteran Prue. I’m going to try the Grapefruit Treacle Tart.

The unfortunate thing with books that are published early in the year is that by the time it comes around to Christmas and the end of year reviews, you’ve forgotten them. Not really forgotten them but they’ve become part of your repertoire, part of the library and you cannot remember whether you got it in 2020 or a couple of years beforehand.

This is why all the top chefs and cooks have their books out in September/October, just in time for Christmas. Small authors avoid publishing at this time because they will be drowned out by the publicity juggernaut that authors like Jamie Oliver, Nigel Slater or Nigella Lawson have access to as bestsellers. So it’s a dilemma.

One of the books that I’ve most used this year is The Pastry Chef’s Guide by Ravneet Gill, a young pastry chef. I’ve used many of her recipes, for lemon drizzle cake, for apple cake etc and they’ve all worked very well. Her instructions are clear and well thought out and her experience shows through the writing. Highly recommended.

Burma, Food, Family and Conflict by Bridget and Stephen Anderson

I discovered this book earlier this year when it was short-listed for the André Simon Food and Drink Book Awards. I met the Anglo-Burmese authors for a fantastic lunch at the River Café soon after. Stephen has a Burmese fusion restaurant in Valencia, Spain (now a delivery service called Decolonial Food) and his sister Bridget is a lecturer at Bristol University. The book is from the point of view of their grandmother Gertrude, the daughter of Sir William Carr, the Chief Justice of Burma and Ma Khin, a Burmese woman who rolled cheroots (cigars) for a living. ‘Their controversial marriage sent shockwaves through both British and Burmese society.’

The book interweaves personal history, food and politics. I’ve made the fermented tea leaf salad recipe ‘Lahpet Thoke’ which seemed to work well. A wonderful present for those who like a bit of background with their recipes.

Which Wine When by Claire Strickett and Bert Blaize (Ebury Press)

I love any book that makes wine more accessible and I like the concept of pairing junk or snack food with wine. Here takeaways are taken seriously, a good idea in lockdown when we cannot go to restaurants. Match fish and chips with an English blanc de blanc, hamburger with Bordeaux red, a cheese toast with Merlot,  chocolate chip cookies with sweet Marsala, and there are suggestions for homely dishes such as sausage and mash and Spag Bol. 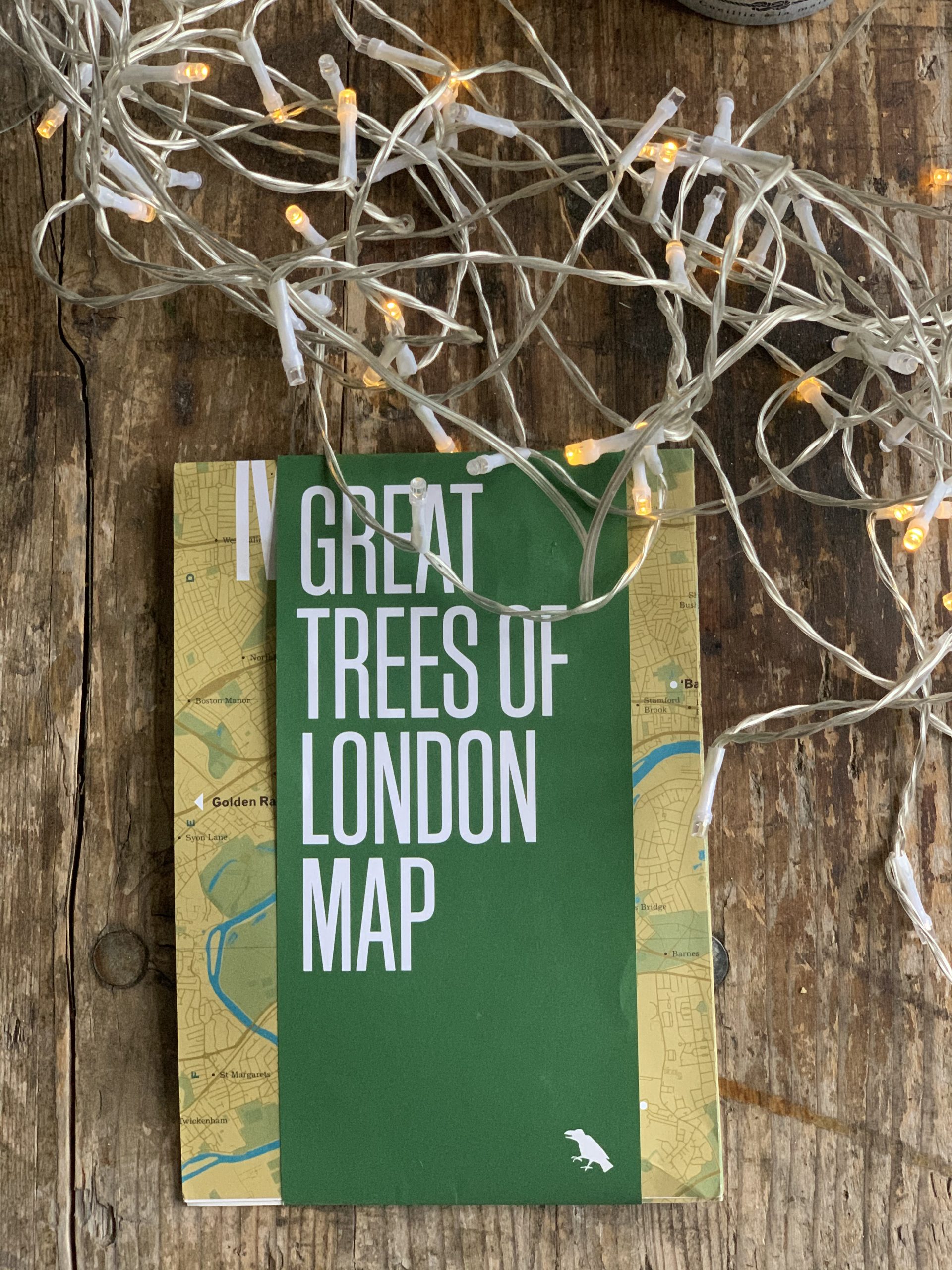 Another stocking filler, more of a leaflet than a book. Paul Wood guides us through a snapshot of interesting London trees. Visit the Strawberry Tree in Waterlow Park, the Fig in Amwell Street, the Almond in Stroud Green on your Christmas walks.

I like this sort of book, a small handy size manual you can keep next to the back door. Every so often I pick it up, flick to the month and see what little tasks I can do in the garden. It’s prettily presented and none of the tasks are overwhelming. I just looked at December, I need to clear up the rest of the leaves, do some mulching and buy some hellebores. Laetitia’s point is do five minutes a day and maybe one full day a month in the garden. I like that she has decorative crafty garden projects as well as the mucky tasks.

This is a large coffee table tome, a real gift book written by the editor-in-chief of Kinfolk magazine. The Kinfolk style has become a meme for understated hipsters.  It isn’t so much for actual gardeners with black fingernails, more for designers who have the time and budget to employ other people. There are plenty of photos of subjects standing around looking moody and cool in large coats. It’s super aspirational but also inspirational. I enjoyed looking at the gardens of artists and architects. A small criticism: the colour printing of the photos seem to lack depth, especially as printed on matte paper, with the effect that the book consists of muted shades of brown. Buy this for the aesthete in your life.