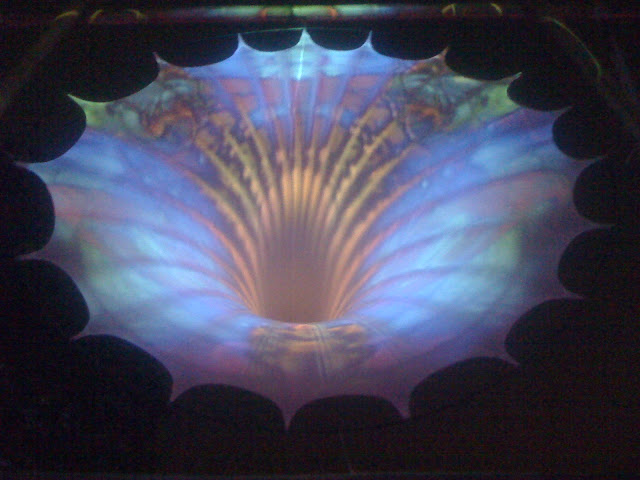 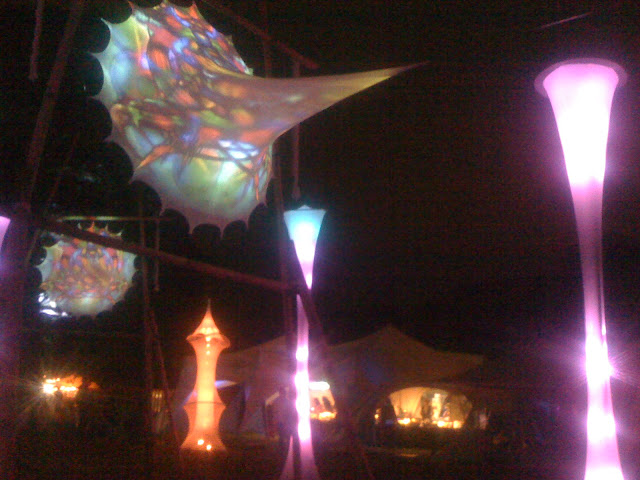 …sitting on the hard shoulder of the M1. Brake caliper blown. We lost a wheel. It’s a miracle we are alive. Why didn’t I listen to the Brazilian murderer and replace the brake fluid?

Just finished cooking at Glade festival, an off-shoot from Glastonbury. God preserve me from dance festivals.

It’s a thankless task being a cook at a techno event. Nobody eats. They are all on the E-plan diet.

People start to eat by about Sunday afternoon when they have used up all their drugs. I have never seen so many people on ketamine. It’s like Night of the Living Dead. My teenager and I sat in the beautiful white sculptural space of inSpiral Lounge, with nylon spectres floating like luminous jelly fish. We watched one man huddled in a foetal position on the floor, gurning in his private world. Another climbed an invisible staircase. A third staggered zombie style. I saw one woman fall over head first in the mud. She just stayed there like that, bum in the air. A k-hole they call it. It is growing in popularity. Why? It is so not a good look. You couldn’t pull on it.

The other drug du jour is Nitrous Oxide or laughing gas. Balloons litter the grass. Teenagers sit in circles holding dispensers, sucking on balloons. I tried one. I felt ill as if I was emerging from general anaesthetic. It costs £2.50p a pop.

Costumes are extraordinary: restoration dandies, robocop, psychedelic robin hoods, flamenco dancers, plushies and of course every other person has dreadlocks. Another snapshot: people trying to row a dinghy across the grass.

My kitchen crew are diverse: a Kurt Cobain lookalike whose Israeli girlfriend worked for the Israeli mafioso who owns Camden lock. Her building and all her belongings were destroyed in the fire. She was compensated in cash by her boss, as was everyone else in the building, which housed staff. Strangely no one was killed. Everybody was ‘out’. The boss had sought planning permission for a casino. The Israeli girl whispered about the fire: “Don’t ask”.

It got quite serious between Kurt and the Israeli girl, her parents wanted him to convert. Trouble is, Kurt said, I had nothing to convert from…

Also in kitchen crew were teenagers from North weezy, my neck of the woods…North West London. Post code gangs…

M, a mixed race kid from Harlesden told me about his mum, who is a tough single muvver.

“She even threatens people at work, yeah, if dey annoy her, yeah, she slices ’em up. Crip.”

“Where does your mum work?” I enquire.

Teenagers are not allowed at Glade, 13-18 years olds are banned. A good idea as the drug usage is so heavy. My teenager was kitchen crew, frying eggs in her ball gown.
One morning I heard shouting behind the kitchen where the bosses’ no-neck teenage monster is stood nervously.

“Don’t go out there” warned the staff “a ketamine lecture”.

“We care about you” I heard “You are 14 years old. These are adult drugs which are dangerous. Do not try them. You cannot navigate your class A’s. Don’t think that you can!”.

Teenagers nowadays are surrounded by drugs. What does the responsible parent do? It’s unrealistic to think that they are not going to try a bit of spliff. I’ve tried to be open and honest with my teenager about drugs and sex. In this way I hope that I can better track what is going on. But I would be distressed if she tried anything harder.

L, the flame-haired waitress, lives in Hebden Bridge, lesbian capital of the world, although she isn’t. It’s a hippy haven, the Glastonbury of the North.

The oldest member of the team is the strangely the one who looks the straightest but has caned it the most. She is a veritable walking encyclopaedia on drugs.
She explained that there were two reasons why the toilets were so bad at festivals:

I chatted also to an older woman who is severely ‘lichenoid‘ that is, allergic to compound metals. It was initially diagnosed by her dentist and she has lost most of her teeth as a result of the lesions. She had to paint her mobile phone with enamel paint, but a bit rubbed off and she now has a huge seeping welt on her texting finger. She can’t go in cars or planes. She is allergic to the modern world. Gold and silver are fine, it’s the compound metals she can’t handle and nowadays everything is made from cheap aluminium.

I drove to the local town of Basingstoke to do some shopping. For 30 minutes I drove around trying to find it. Then I realised that the industrial type buildings with air vents sticking out the back was Basingstoke. The pedestrianised High Street faces inwards, invisible to the outside world. There is a town hall styled like a downmarket Disneyland Main St. The shops are all chains. Fine dining is restricted to a MacDonalds, a Café Rouge and a pub chain. Walking through, I felt the hope drain out of me. It was the town planning equivalent of a Dementor.
from my iPhone. 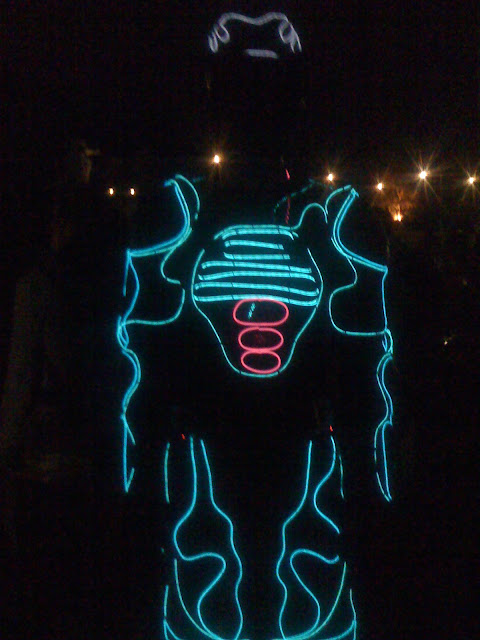 This guy made his own robocop outfit… 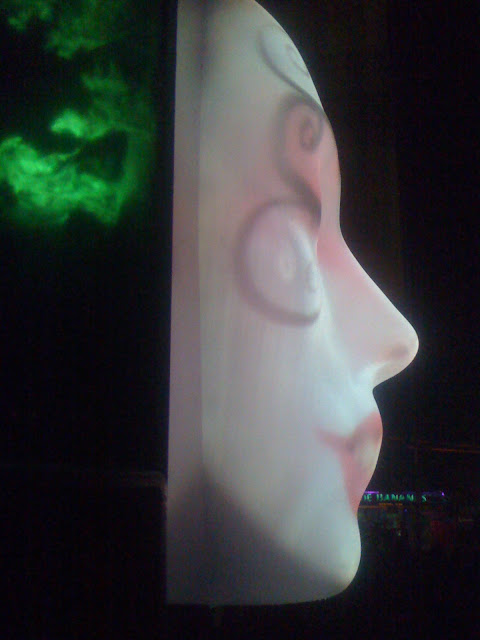 Amazing installation which had different faces projected onto it… 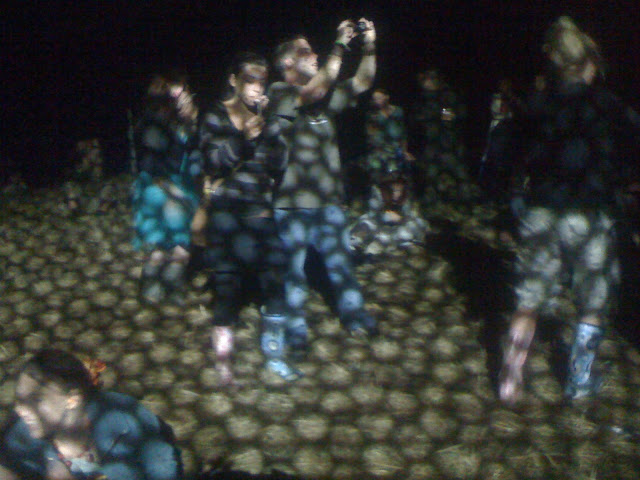 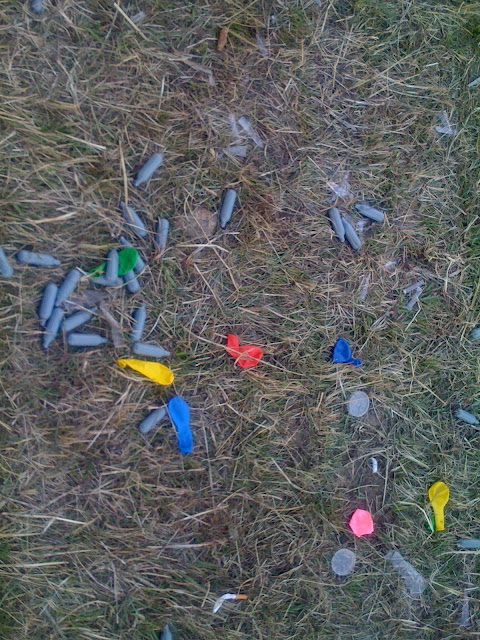 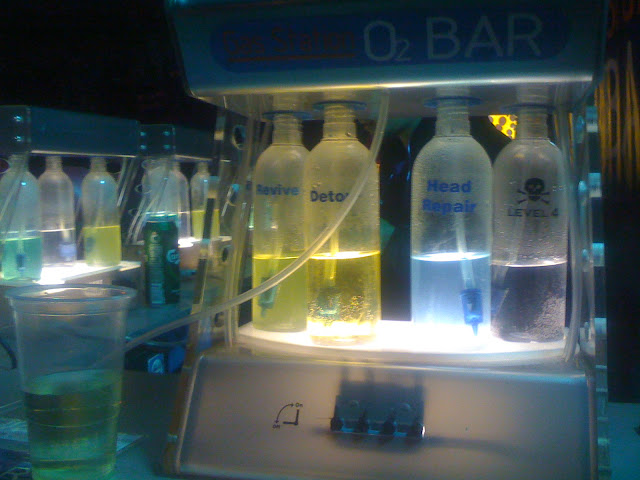 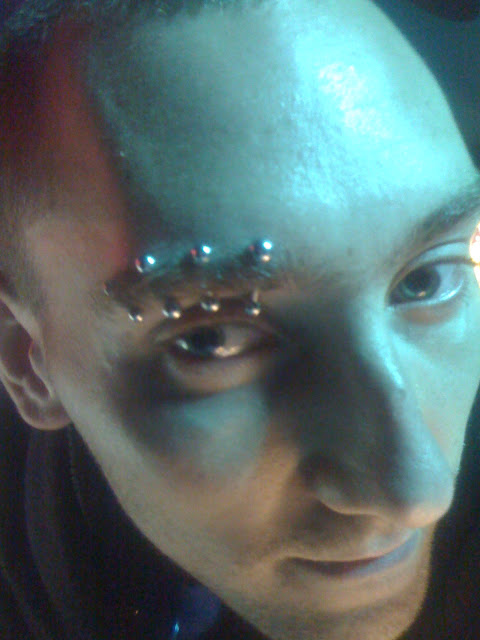 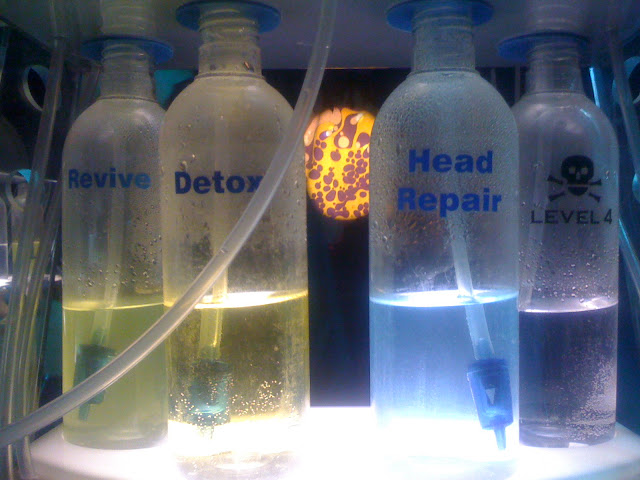 I wonder what level 4 does…