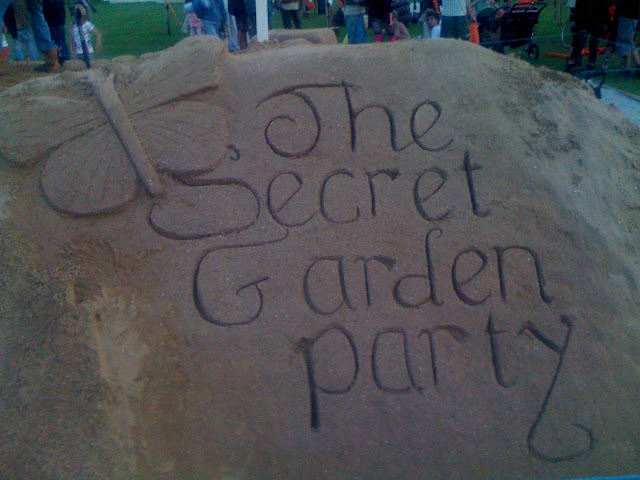 In the massive gardens of a private house near Huntingdon, John Majors’ old constituency, is a yearly garden party with a difference.

It now seems that the new play thing of the landed rich is to host your own festival. This one, however, is probably the best festival I have ever been to. Even the website is beautiful. The land encircles a lake where a specially built pirate galleon floated. One could take out a dinghy and drink in the bar there. The gardens, bridges and decorated trees (bananas, shoes, dolls) reminded me of that gorgeous garden near Tunbridge Wells, Groombridge, where The Draughtmans’ Contract was filmed. The vegetation was lit up with green and purple lights. Seating consisted of velvet chesterfield sofa’s, comfy armchairs and covered haystacks. 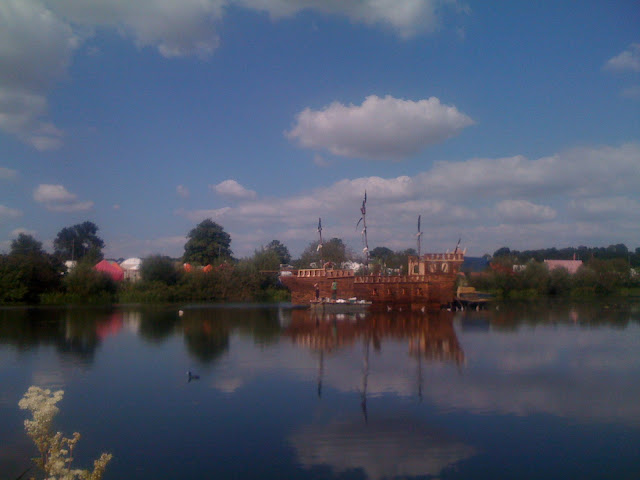 In one corner was ’boutique camping’; Bedouin tents, pastel painted summer houses, Wendy houses, teepee’s, bell tents with air mattresses and of course private showers, actually not so private, as they were transparent pyramids. Rumour had it that these cost £650 for the weekend. 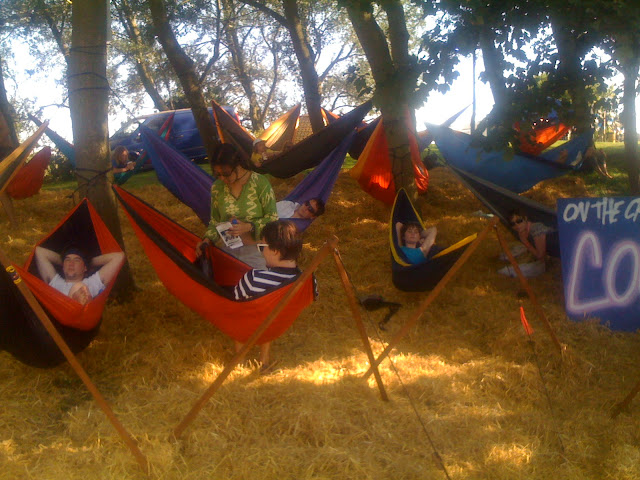 I ‘tatted’ there at the end and picked up abandoned wigs, a Moss Bros mohair dinner jacket, unused wellies strewn amongst the empty champagne bottles and half-eaten boxes of gourmet chocolates.
The atmosphere reminded me of the party at the mysterious chateau in the country from that magical French classic novel ‘Le Grand Meaulnes’.

Everyone was dressed up: ball gowns, feathers and top hats were de rigeur and that’s just the men!

I spent my wages from Glade on a blue and white polka dot flamenco dress with red ribbon flounces. I briefly worried that I had wasted my money until I saw the reaction from the male half of the population: I received a marriage proposal from a Ghostbuster, a bed proposal from a 23 year old minor pop star and much more…to the extent that my old mate Ally, another Norf London girl, went straight out the next day and bought the same dress in purple.

Grace Jones played only her second British gig on Saturday night. She is Naomi Campbells’ spiritual predecessor. At one point she lay down with her legs spread-eagled directly on front of the photographers, inviting them to shoot up her fanny. I stood well back, not wanting to participate for feminist reasons and also, knowing something of her volatility, frightened that she might start kicking us with her heavy stilettos. 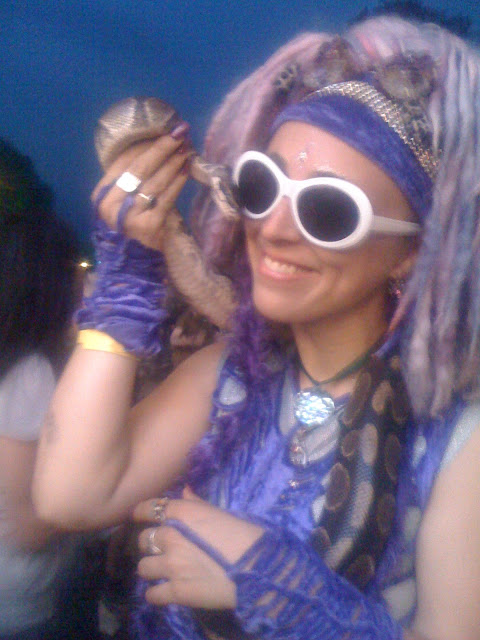 The seedy male photographers however, cheerfully continued to snap away with their telephoto lenses obscenely directed. (Recently speaking to a member of her entourage, he admitted that they were all terrified of turning their backs on her (who could forget Russell Harty’s fate when he did the same thing). The audience were camply enthusiastic, including one lady with a large snake coiled around her neck. Others insisted on performing with her, dancing sexily and enacting lesbian tableaux with Grace. When pushed back by security, they took the opportunity to crowd surf, carried along by hundreds of arms.

Grace is proud of her arse and rightly so…encased in black fishnets, it had not dropped an inch, despite her advanced age. She changed costumes for every song, wearing a selection of sculptural hats. Her son by 80’s video genius, Jean Paul Goude, played keyboards.

At the end of her set, candle-lit rice paper lanterns were released into the night sky and the pirate galleon was set on fire. 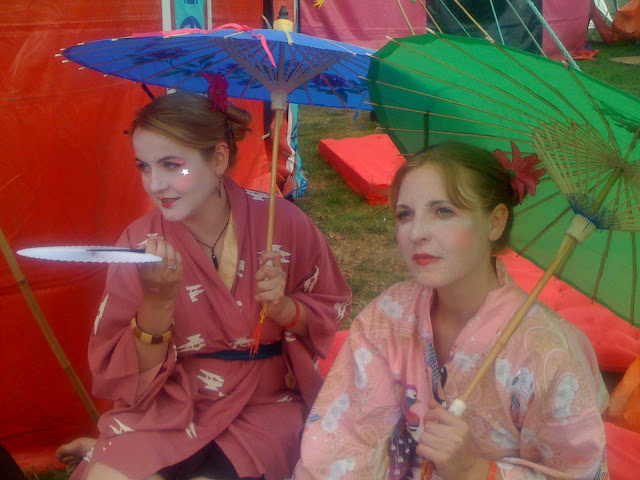 Secret Garden Party, however, is not really a music festival. The attraction, apart from the people and the gardens, lies in the art installations. My favourite was ‘Sparkly Nuts’ by Abby which I called the mutant teddy bear tent. She had collected hundreds of soft toys which were mutilated and reconstructed, Jake and Dinos Chapman style, into obscene and disturbing combinations. She works as a secretary for an engineering firm during the week and asked her rather straight colleagues to donate toys. She was reluctant to explain what would happen to them though, merely saying:

“Some of them will end up in good homes and some of them…won’t!”

The effect finally was of a child’s bedroom but perverted: twee flowery sofa’s filled with cuddly toys with a difference: a bedside table which, when you looked more closely, contained a teddy bear sniffing a line of coke off a mirror; a chest of drawers with a grope room in which a fluffy rabbit gave a blow job to a panda. 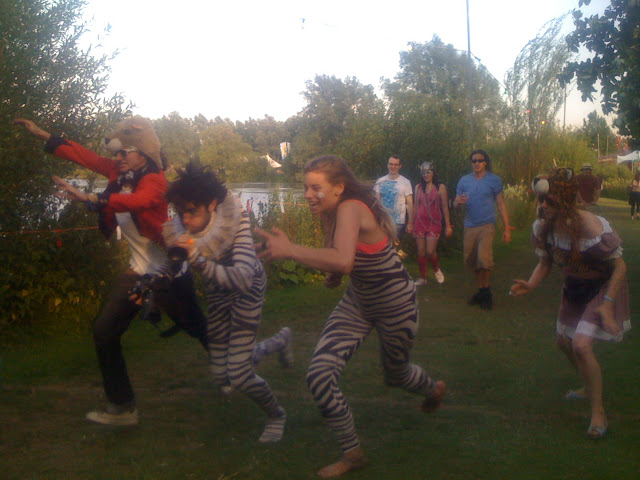 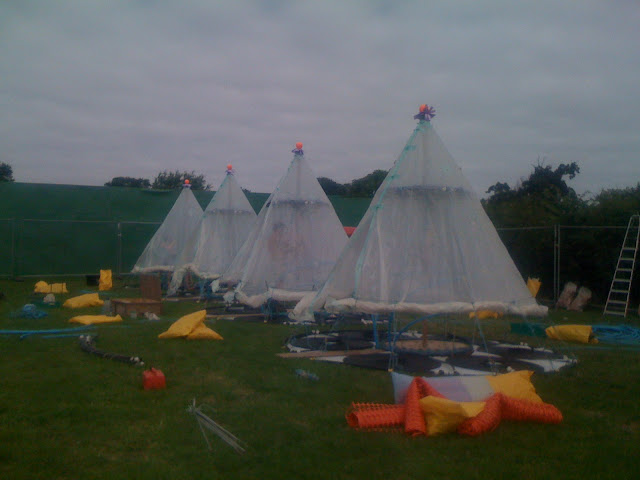 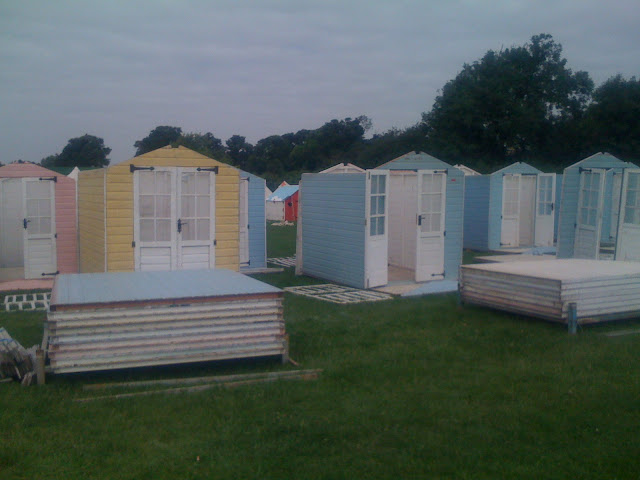 Boutique camping summer houses being constructed…
The ‘Sparkly nuts’ tent ended up as a rave every night. There seemed to be several animal themed installations such as Zebra world, where artists dressed as zebras, did little concerts and running races and filmed stuff on the zeb cam. One man explained to me the difference between plushies and furries in the world of fetish: plushies use little stuffed toys in their sex play. Furries actually want to become animals, they dress up in furry animal costumes, believing that animals are better than humans because they are innocent.
Further along, in another tent, three girls dressed as bananas, did karaoke. I saw another old friend, Andy, recently separated with his 5 year old in tow. She was dressed in 3 layered sets of pyjamas as Andy had forgotten to bring her any clothes and whose solution to this dilemma was to dive into Mothercare and buy a ten pack of pyjamas.
A highlight of the festival for me was being picked to act in a version of Hamlet where the prince hoola-hooped while reciting the bard.

My only low moment was being blanked by The Wizard, dressed all in white with his dreadlocks nesting on top of his head in the shape of a Mandelbrot set, who had two girls on his arm (whilst nonetheless continuing to look greedily at every other woman there): one, the ‘wicked’ witch from the East who flew in on her broomstick, flashing her acid queen smile, for his 40th birthday party whilst yours truly submissively cooked downstairs (I thought I could smell pussy on him as he walked past, laughing to myself that the situation was like something out of a 70’s Play for Today) and the other, “bug-eyed of Brixton” (as she has been named by Ms Puddleduck), whose charms remain a mystery to the casual onlooker. Why do they put up with it?

The Wizard was giving a talk on game theory which I couldn’t attend but I did send a mate, Liverbird, who ended up heckling him!
Mornings after at festivals: Liverbird noticed that her ballgown had a grassy muddy stain down the back, but could not remember what she had been doing. One member of crew woke up with an earring pierced through her nose, another mysterious nocturnal occurrence.
Huntingdon itself was again a bizarrely depressing English town. Seemingly built in the architecturally charmless 60’s, it is in actuality the birthplace of the English revolutionary/dictator Oliver Cromwell. Every other person there was disabled or old. I’ve never seen so many crutches. I suppose the young have fled in horror.
I was there cooking for a burlesque café. It was sweltering work but not as bad for me as it was for the others who were cooking English fry ups in 90 degree heat. Strange to see hippies queuing for bacon butties.

Kurt Cobain got so hot he left the tent and vomited. Cooking in that situation is like being in an army mess kitchen in the tropics. I was the only Londoner amongst mostly Mancunians who all live in the same building, the ‘Yellow bricks’ (in contrast to the mostly red-bricked buildings in that Victorian industrial town) also part of the Homes for Change scheme (locally known as flats for twats).

A festival is probably the only place of employment where, when a member of staff was asked to come in to do an extra shift, it was regarded as a perfectly valid excuse when he replied that he couldn’t possibly as he had just that moment dropped a pill and well people wouldn’t want hugs with their sandwiches would they?
Sitting round chilling at the end of a long day we batted back and forth regional insults between the Welsh led by the boss, a beautiful Juno-esque lady with red dreads, who customarily had a two year old suckling on one of her ample creamy breasts, Liverbird, the mancs and myself, the only ‘cockney’.
Big Issue jokes are popular in Manchester:
Knock knock
Big Issue seller: Who’s there?
Well, you can’t be homeless then can you?
At one point I had to boot out two evil fairies from the café who decided to sit on the grass amongst the tables and hawk up gob and snot and smear their hands with it. The initial elegance of the event had started to descend into drug-addled decadence and bad behaviour. Not everyone was glammed up either, one dread-locked woman wore seemingly the same bikini for a week, probably the best solution for a hot sticky festival. If only I had the figure for it! 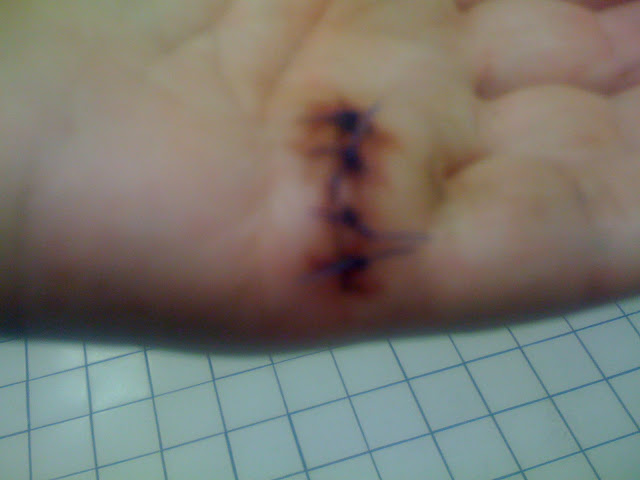 The final day I cut my hand on a dodgy tin of sweetcorn and had to be taken to the hospital for 4 stitches. I then had to wait around for days to get my van repaired. It was dumped by the RAC, propped up Flintstone style with a log in place of its missing wheel,  next to the compost toilets. In the heat this grew progressively stinkier and more unpleasant, attracting more flies. We were sleeping in the back of the van.
I questioned the people who provided the toilets, The Natural Event Company, why it stank so much because compost toilets do not normally smell. These toilets were also overflowing by the second day. They explained that it was because the organisers had under-estimated how many people would come to the festival. In previous years it was only about 2 to 3000. This time it was 14,000, 4000 of whom were the artists’ guests. The Natural Event Company are paid, literally, in terms of bums on seats and so it is rather advantageous for the organisers to under-count how many paying punters would arrive.

“But they all shit don’t they” said one guy “whether they pay or not”.

(Unless they suffer from the notorious festie constie, where you cannot go for the duration of the festival). Anyway, as a result, the pee was not pumped out of the toilets regularly enough and it is the urine, not the poo, that stinks. 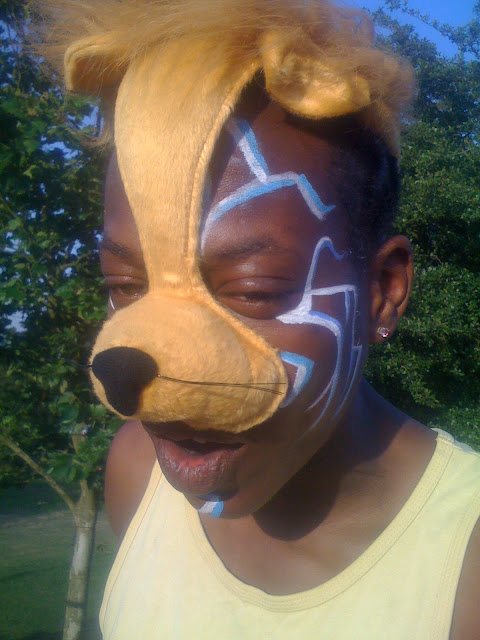 Is he a furry? 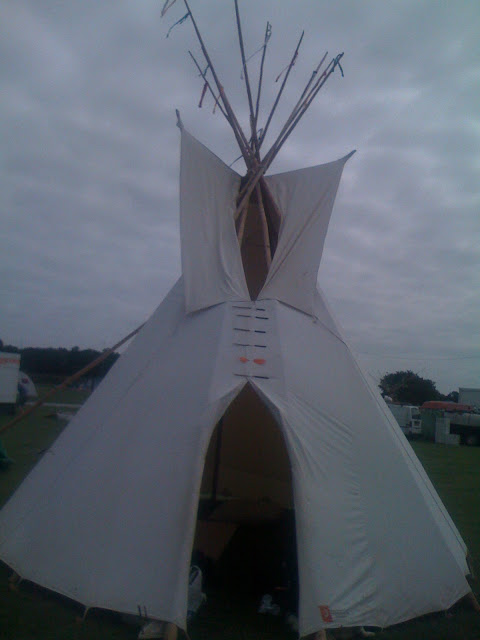 One of the teepee’s (don’t they look like vagina’s? Levi-Strauss has an explanation) 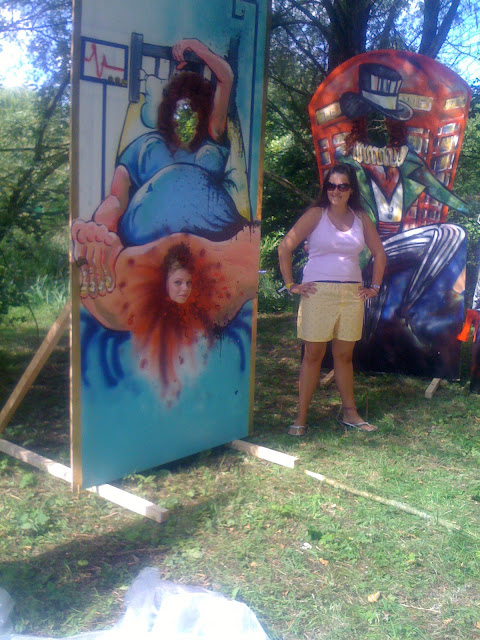 You could have a Kodak moment here… 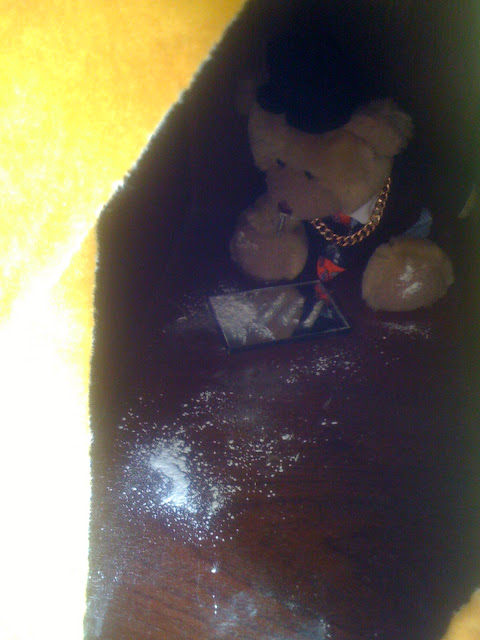 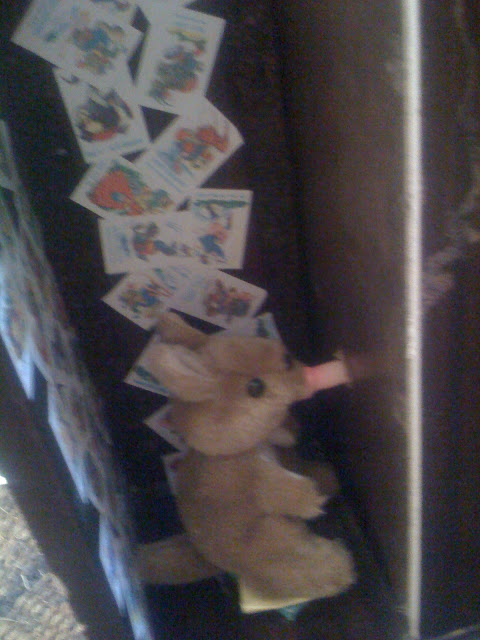