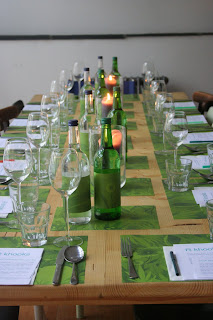 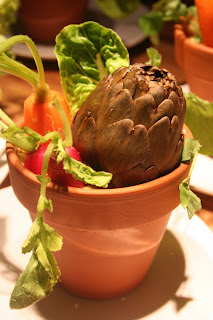 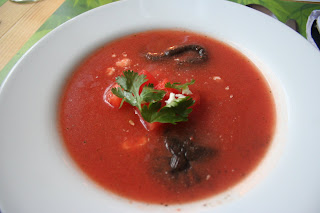 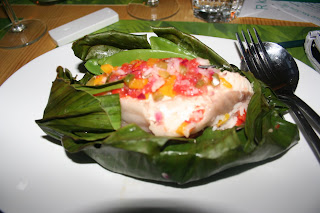 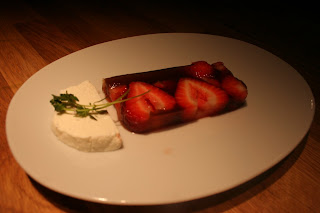 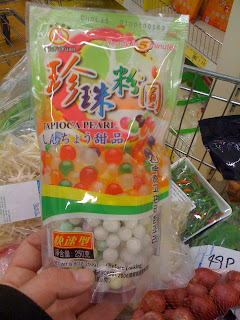 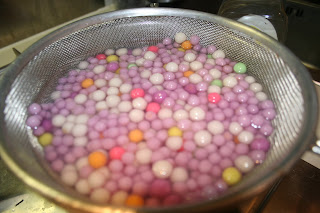 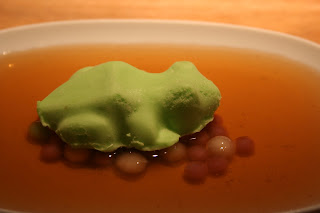 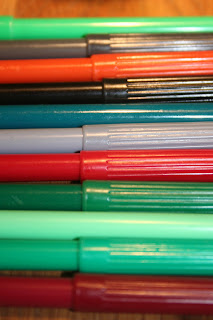 Each table was given a felt tip to write notes on their menus.

Rachel Khoo calls herself a ‘food creative’ not a cook. A graduate from St. Martins, she has been living in Paris for the last four years. As I know from personal experience, it’s not easy to ingrain yourself in the scene there, to find work. It’s a culture that functions on ‘pistonnage’, who you know, not what you know. Rachel, however, has done very well, styling food for magazines and creating patisserie for chic cookbook hangout ‘La Cocotte’ (in the 11eme arr.).

She is in London this week to present another of her ‘Mashup’ dinners at The Loft supperclub. ‘Mashup’ started as a tecchie computer term, describing the move from an older traditional technology to a more loosely defined, newer Web 2.0 format. It has come to mean anything, music, writing or visuals, that takes influences from several, sometimes disparate, sources recombining them into one. In food terms this can be a menu that ‘quotes’ from different cultures and cuisines, to form a dish. It doesn’t mean you will get mashed potatoes. Although you can’t rule it out.
The theme tonight was ‘Garden’. Rachel enlisted the help of French illustrator Thomas Baas to create table settings in apple green.
Our first course was duly appropriate in look and ingredients: a terracotta flower pot with potato pebbles and fresh flowering vegetables, carrots, radishes, an artichoke sprouting out of the top accompanied by a delicate lemon aioli. Guests started to pluck the crudités out of their pots.
Rachel smuggled the produce over from Paris, heaving a bulging suitcase on the Eurostar.
I was sitting next to Nuno Mendez, The Loft’s chef/patron who lent out his space to Miss Khoo for the night. Talking about the time that I smuggled two baby chickens to the UK from France (I was stopped by customs who searched my van for illegal immigrants but missed the chickens. I drowned out their squawks by playing very loud techno), Nuno mentioned that many London restaurants drive weekly to Rungis, the Paris wholesale food market to buy their produce. I can’t blame them. You don’t get potatoes, tiny, waxy, naturally buttery, like that over here.
This ‘crudité’ course is accompanied by the best bread I’ve had in a while, direct from the Paris bakery ‘Du Pain et des idées‘, chewy and smoky.
The second course boasted an interesting and successful flavour combination: watermelon gazpacho with disturbingly realistic bugs made from iced black olives. There are gasps of shock and slight nervousness from the guests down the table.
Rachel is performing two jobs…hostess and chef, therefore, like me, she too cooks in full makeup and heels, then trots out of the kitchen to explain each dish.
We moved onto the main course, sustainable Halibut on a bed of rice and garden vegetables baked in a banana leaf. Again this dish was beautifully presented, very summery, very jardinier.
We had two desserts: the first was thinly sliced strawberries in a balsamic reduction, encased in a gelée, which was my favourite dish of the night. The second dessert answered a question for me; I’d recently bought a packet of multi-coloured balls in an Asian supermarket. They’ve been in my cupboard but I didn’t know what to do with them.
To my delight Rachel was using the very same packet, boiling these tapioca balls. These balls are used in ‘bubble tea’ and sucked up with a huge straw. Rachel served them in a pool of Darjeeling tea, topped by a creamy pandan leaf flavoured frog. This was paired with a dessert wine, Muscat de Rivesaltes ‘Vagier’ 2007.
All the wines were wonderful and well matched.
Rachel has a sensitivity to salt which was reflected in the seasoning of the savoury dishes.
On the way home we chatted about Paris, the food scene there. The underground restaurant movement seems to be confined to American chefs. We wondered why that could be…

“The French don’t like to mix in the way we do, to share tables with strangers” Rachel said.

It’s not a ‘mates’ culture in France as it is in Britain. People hang out with their families, for it is, after all, fundamentally a Catholic nation. When I lived in Paris, it was rare to see my friends at weekends as they all returned to their family house on the outskirts or in the country. (1)
Nuno’s restaurant Viajante (Portuguese for ‘traveller’ representing Nuno’s nomadic inspiration for his food) will be opening at the Bethnal Green Town Hall next year. He plans to keep The Loft going as a space “a cooking gallery” for creative chefs to showcase their work, like an artist in residence.

“I’m moving out, so the chef can live here for a month and set up dinners. I want to promote new talent” continues Nuno “I know how hard it can be not to be able to do your own food if you don’t have a restaurant. This will be an opportunity for chefs to show what they can do”.

I asked Nuno if he would feel happy to open a ‘normal’ restaurant again.

“Here, I’m my own boss. I’ve enjoyed the freedom. No rules. It’s my playground, as long as the neighbours don’t bitch too much. At Viajante I have partners so I will have to compromise. It’s not just me.”

Is there anything he would take with him from this experience?

“I will have a long mixed table again, near the kitchen. This has worked very well.”

Nuno feels that his food is moving away from molecular cuisine.

“I like clean food, that makes you feel healthy. It is influenced by my travels in Asia, living in New York and my Portuguese background.”

He loves Hackney and the East End of London however.

“I was given opportunities to open up in Trafalgar Square. But I want to stay local. I like the way this part of London is anarchic, edgy. The other day I saw a crazily decorated car, like a work of art. You don’t get that in the centre of town”

(1) I also recall going to pre-natal classes when I was pregnant in Paris. These classes are an opportunity in Britain to make friends with other pregnant mothers. In Paris, the other mothers made it clear they were not there to bond or socialise, just wanted to learn how to do the proper breathing. I gave up after two classes. The French call themselves ‘individuel’. This is often mistranslated to mean ‘individual’ as it does in English, but in reality points to the fact that the French do not like clubs, associations, community in the same way as say, Anglo-Saxons. That’s why they don’t queue either.