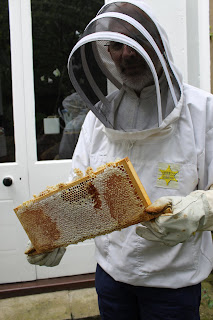 Hugo in his bee keepers outfit 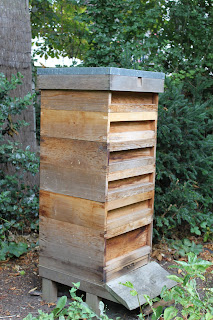 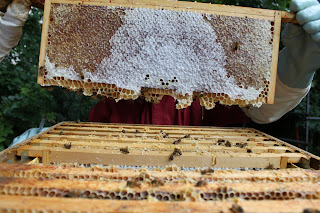 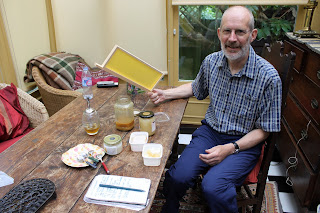 Hugo in his honey coloured conservatory in Kilburn 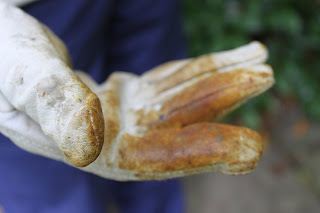 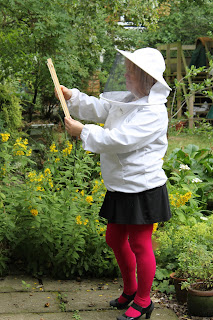 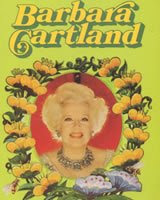 Sadly missed, the lady in pink, lived forever, no doubt due to her obsession with honey.
Honey, as Barbara Cartland was all too aware, is magic. I have been on the search for local honey ever since I was told that a teaspoon a day of local honey can cure hay fever. I found Kilburn honey through North London Beekeepers.
Hugo Hodge, a solicitor, lives practically opposite me and has a hive in his garden. He’s been making honey for five years and is part of a small group of local beekeepers(the menacingly acronymed ‘KGB’ stands for ‘Kilburn Group of Beekeepers’) that meet every fortnight. 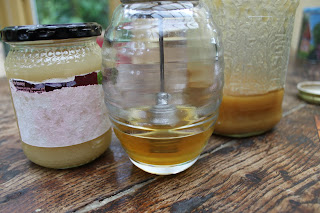 Kilburn honey tasting
Hugo gave me a honey tasting. The one on the left is paler, 2008/9 honey. It is herby, lemony and sugary with notes of Eucalyptus. The middle and right contain two year old honey, dark chestnut-like liquid, complex in flavour. Hugo thinks the honey is darker when there is plenty of lime tree nectar, which depends on the weather in June not going below 17 degrees. 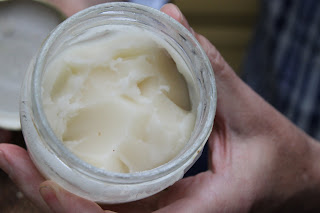 Acacia honey
This is a pale honey ‘goose fat’ from a local beekeeper who happens to be French. He keeps his hives, surrounded by Acacia, in France. The taste is flowery and the texture melts in your mouth. Clover honey is also pale.
You can eat honey still in it’s comb, just don’t spread it as the wax will become lumpy. The wax is edible.
Bees swallow nectar into their ‘honey stomachs’ and regurgitate it into honeycomb wax.
Over the next month the bees will reduce the water content in the honey by flapping their wings to dry it. This is remarkably accurate, when water content is reduced to 17% (when there are enough anti-bacterials) the nectar becomes honey. It can be rubbed on wounds to sterilise and promote healing. The National Health Service buy many ‘honey dressings’ every year…lint bandaging impregnated with honey. Manuka honey, from the teatree has particularly strong anti-septic qualities although it tastes no different from normal honey. Honey never goes off.
The wax is secreted through the bees wax glands. There are stages in bee responsibilities once they are born. First they clean the hive, then they become nurses, then wax builders, then guard bees and finally, flying bees, when they collect nectar.
Bees are all women; mothers and daughters. Up until the 18th century the Queen bee was called a King for people assumed that the head of any organisation would be a male. It seems current political fashion influences our observations and analysis of nature. Now we call a hive, a separatist feminist state and things are run via a workers co-operative.
Men: drones are few, maybe a couple of hundred out of a 40,000 bee hive. Drones are incredibly lazy, they don’t even feed themselves, female worker bees literally put the food in their mouths. They are there to mate with the Queen, ultimately three or four will get the chance. Sex is fatal; once they ‘pull out’, they leave their genitals in the queen and die. (Sorry can’t stop laughing as I write this). A queen is a more developed worker bee, a kind of Jordan/Katie Price of the bee world.
Your intrepid reporter wore a mask and ventured out to the hive. Staying clear of the ‘flight path’, Hugo lifted out the combs dripping with amber honey, shaking off the bees gently. The honey is ready when the bees seal off each little compartment. If you extract the honey from uncapped cells, it may go rancid as the water content is too high.
Different foods are available from a hive in addition to honey, such as pollen, which can be put on breakfast cereal, propolis, and ‘royal jelly’ otherwise known as bee milk or bread. It is very difficult to harvest, being the food that is fed to the larvae. More royal jelly is given to larvae chosen to be Queens, which aids in developing the ovaries neccessary for reproduction. It is from these cells that the Royal Jelly is taken.
I asked Hugo if he ever got stung.

“Last year I didn’t get stung at all. This year I’ve been stung twice”

I suggested he use Apis Mel, a homeopathic remedy to alleviate the pain.
Hugo collects the honey in July. Commercial honey makers may do it earlier and not leave any honey for the bees, feeding them for the rest of the year on a refined sugar syrup which has less nutrients. Smallholders such as Hugo always leave honey for the bees to survive. On a good year he gets about 60 pounds, or 60 jars. The honey ‘flows’ for the first three months after extraction and then crystallises. Honey can be warmed up to get it flowing again but don’t heat over 40 degrees as that will kill the nutrients.
Setting up your own hive costs approximately £300 of which the most expensive element is buying a bee ‘nucleus’ to get it going (£90). North London Beekeepers run courses which I’m going to join. Hopefully The Underground Restaurant will be able to serve honey from my garden next year…
Bees in Europe are in decline due to climate change, Jordans, the breakfast cereal makers are running a campaign to raise awareness of this.
There are also underground beekeepers in Brooklyn, New York where it is illegal to keep bees. There is a thriving community…like underground restaurants, people are telling Big Brother where to get off!