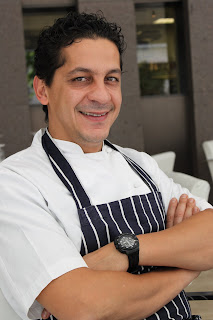 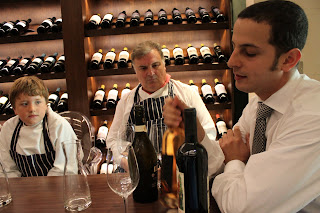 Gal Zohar on the right teaching, Dino of Gastro1 in the middle, and future gourmand on the left. 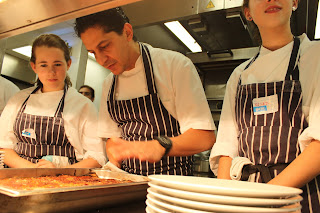 Teaching how to plate up and garnish… 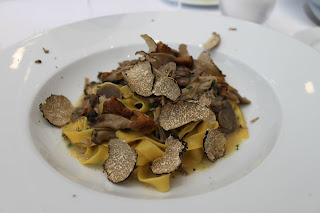 My fresh pasta with mushrooms and truffles, you could smell the forest.. 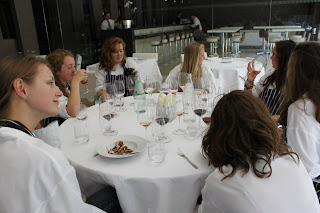 Teenagers drinking: I think youngsters develop a healthier attitude to alcohol if they are given a little wine with food, making it a moderate balanced part of your diet
I was invited to go to L’Anima in the city where Francesco Mazzei was giving a cooking class to teenagers. I’ll take any opportunity to learn more about cooking and having a teen myself, it was an offer I could not refuse. It started at 11am. It being a Saturday I decided to drive down. No problem, I thought, it’ll be easy to park. How wrong could I be? It was so hard to access, so many streets are blocked off. Most of the parking machines don’t work and besides it costs £4 an hour to park although it’s free after 1.30pm. I literally spent an hour and a half, on the verge of tears, trying to find the place and park. Eventually I found a street round the back of Spitalfields where I could park all day for free on a Saturday.
However this meant that I missed the cooking bit. I arrived just as Gal Zohar @zoharwine, L’Anima’s sommelier took the group of 14 year olds, a birthday treat, to the wine room. He explained wines simply to the group, encouraging them to describe the ‘bouquet’. I was impressed by the freshness of their palates.
He started with Prosecco:

“What do you smell?”

The kids were hesitant at first…

“Say what you like, what first comes to mind” encourages Gal “don’t be afraid of saying something stupid”

This precocious set of youngsters knew Pinot Grigio…however this one was unusual being ‘Ramato’, going a copper colour when the grapes are very ripe.
Next a couple of reds, which the teenagers enjoyed less, the taste probably too heavy for their young palates finishing with a dessert wine which they all loved.

Looking around the ‘caveau’ the brother of the birthday girl asked “Which is the most expensive wine you have here?”

“How many have you sold?” asked this kid, a future food journalist in the making.

“Four since we opened”

“How long have you been open?” I asked.

Of course, that is how long the recession has been going on, I imagine a few years previously, bottles that price were flying out of restaurants in the city as bankers lived it up. In fact forget the FT index, just ring up City restaurants and ask how many bottles of their top wine/champagne have been sold to get an idea of how well the economy is doing.
Afterwards we all sat down to enjoy the lunch prepared by the teenagers with the help of Francesco. We started with aubergine parmesan, cooked simply with tomato, basil, mozzarella, aubergines fried in flour and parmesan. Francesco told me his mother puts tons of ingredients into her version: eggs, dumplings, it ends up about a foot thick. Melanzane Parmigiana is one of my favourite dishes, it was beautifully cooked.
I particularly love the bread at L’Anima; the sourdough is the best I’ve eaten in a while.
Next the others had Fettuccini Bolognese while I, as a vegetarian, had an amazing treat: fresh pasta, made by the kids, with champignons du bois and tons of shavings of fresh truffle. Ha! Sometimes it pays to be a veggie…I felt the envious looks and shared it around with Dino, Gastro1 and the birthday girl’s parents. Dino had just come back from Italy, he’s half Italian, and brought a couple of excellent artisanal Parmesan cheeses for Francesco to try. For a main course I was served fresh salmon with salsa verde while the carnivores ate chicken (I think). It was a lovely family atmosphere, the type that Italians specialise in, and Francesco invested so much time talking to the kids, giving them encouragement to cook, taste, smell, experience food.
We finished with tiramisu and coffee. I felt privileged to attend especially as my own teenager is away in France and I miss her so much. It’s no doubt a taste of the empty nest syndrome that I’m due to experience in the next few years and I’m not looking forward to it. It’s particularly anxiety producing for me as I am a single parent. But you’ve got to let them go haven’t you? All part of parenting…
So, alone in the city, I wandered around Spitalfields, it’s all so posh nowadays. I chanced upon Teasmiths tea shop. I love tea far more than coffee (sorry Fat Les) and would like to see a proliferation of tea shops grow in the same way that coffee shop culture has boomed in the last decade. However just as the price of a cup of coffee has become ridiculous, often for very poor quality (Starbucks), Teasmiths selection were shockingly expensive. A basic cup of tea costs £3.50p, going up to £15. Yes! This is not a misprint! Fifteen quid for a cuppa! Granted, it’s some sort of rare tea, no doubt passed through the gut of grass-fed hand-massaged bison, with each leaf individually dried on a copper altar of a cult religion and picked by pygmies up a hillside somewhere, but that’s still quite a lot of dosh.
The girls in this shop were lovely; I said to them I’ll put myself in your hands, I don’t recognise most of these teas. They gave me a black tea, partially oxidised called Oriental Beauty. Normally this costs £12 for a cup but you get three infusions, meaning you can used the same dose of leaf for three teensy pots. Each one will taste different, it was explained. Fortunately they only charged me £3.50p. It was fascinating watching them serve it, an awful lot of pouring back and forth between different porcelain containers. But in the end I couldn’t honestly say it tasted better than builder’s tea. By the third infusion it was very tannin which as a Southerner, liking pissy weak tea, I wasn’t too keen on. They managed to persuade me to have it without milk however. Seeing my disappointment, the girls gave me some white tea for free, just to try. This was much nicer, light and delicate in flavour. I know what I will order next time. Much as I celebrate tea and would like to learn more, I do wonder if in these recessionary times, small Japanese style pots of tea at those prices will do well. 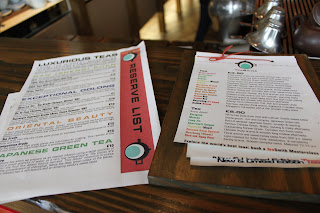 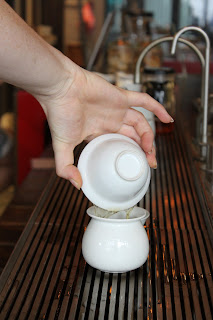 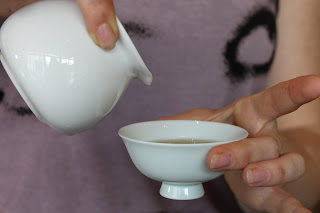 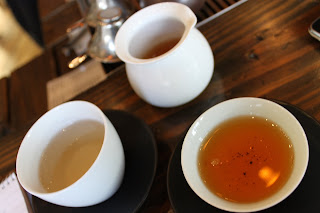 White tea on the left, black on the right.