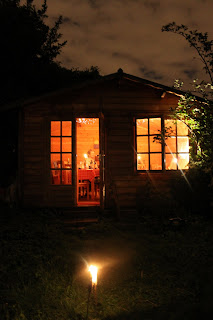 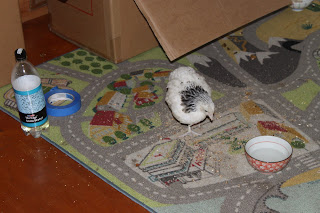 One of the chicks was ill so was living indoors “Does it run around the track?” my friend asked 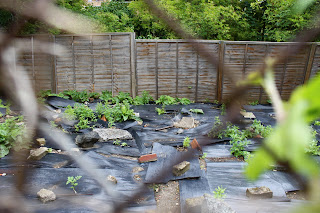 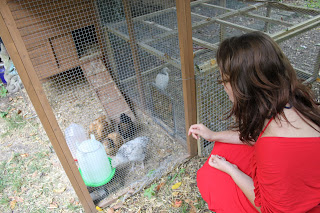 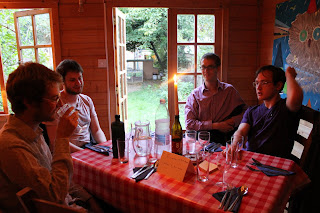 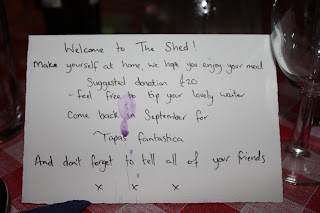 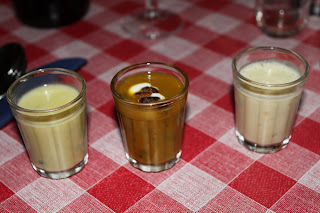 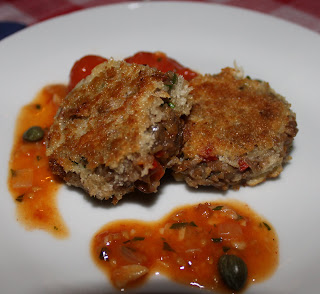 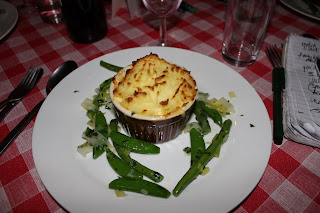 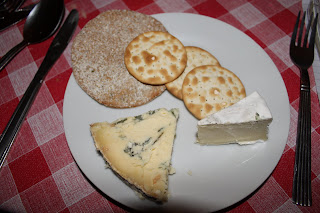 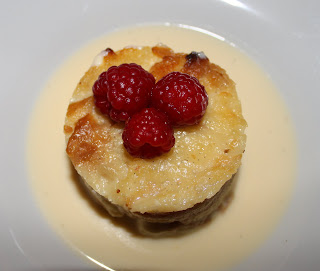 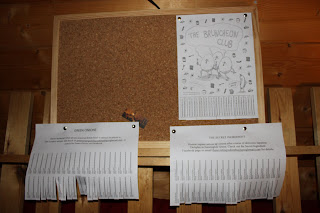 Notice board in The Shed of other underground restaurants 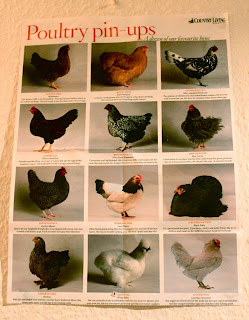 I love wooden sheds. I like the idea of being inside just a 2-by-4’s breadth away from nature, the smell of wood and the dolls house/Swiss chalet feel. So you can imagine how excited I was, after putting guests in my shed on an over-booked night, to hear that somebody was opening a supper club in their shed.

I went to visit Nicola and her boyfriend Andrew at their ground floor flat in Newington Green a few weeks ago. Nicola was making chutney in their narrow kitchen. The large garden had a hen house with chickens.(1) Next door’s garden was interesting; their gardening technique was to cover the whole thing with black plastic bags so nothing would grow!
Nicola works for a fine food company and is obsessed with food. She’s the kind of woman who leafs through cookbooks in bed. The type of woman that Martin Amis would detest, for apparently he divorced his first wife for precisely this behaviour. Andrew her partner, is a solicitor and a vegetarian.
The Shed is open weekly on Tuesday nights and is a fine addition to the Underground Restaurant network. The menu will change monthly. I’m not sure how Nicola is going to manage as she will have been at work all day…
To start with we had tiny fingers of Welsh rarebit (melted cheese on toast with Worcester sauce and Guinness) matched with a welcome drink of Black Cat beer.
I was starving so this simple but tasty canape was very welcome.
Next was three shot glasses of three different soups: a chilled fennel and Greek yoghurt soup; leek and potato and spiced pumpkin topped with roasted pumpkin seeds. Absolutely delicious and the combination of the soups worked so well. As an appetiser it left you longing for more.
In the warmth of the shed, Indian music weaved it way through the atmosphere; outside you could see candles flickering in the green grass.
The soup was followed by delicate spicy lentil cakes served with home-made tomato sauce and capers.
Main course was a perfectly proportioned fish pie with green beans. The fish pie was creamy and light with gorgeous crusty mash on top.
Cheese course consisted of Colston Bassett stilton and Tunworth from Hampshire, served with home-made apple chutney and biscuits, one of which was particularly good, from Peter’s Yard, a Swedish bakery in Edinburgh.
I was starting to feel full now but made room in my special extra stomach for desserts for the white chocolate croissant pudding in creme anglaise.
Man that girl can cook!
Nicola has given me the recipes for my favourite course, in particular the fennel and pumpkin soups:
Chilled Fennel and Greek Yoghurt Soup
50g butter
2 medium onions, finely chopped
1 cloves garlic, finely chopped
2 heads fennel, finely chopped
2 pints vegetable stock
Finely grated rind of and orange
2 tablespoons of Greek yoghurt
Small handful finely chopped dill
Salt and pepper
Melt the butter and gently cook the onion and garlic in a covered saucepan for 10 minutes without colouring. Add the fennel, stick on a lid and cook for 30 minutes, stirring from time to time, to release the full flavour of the fennel – do not let things colour. Add the stock and orange rind and simmer for a further 30 minutes until everything is nice and soft. Allow to cool a little then purée in a blender and pass through a sieve. Stir in the yoghurt to your taste, add the dill and season. Allow to cool then refrigerate until use.
Spicy Pumpkin Soup from Moro East

2.5 clove garlic, minced with a pinch of salt

1.5 tbsp(s) milk
This is from memory so hopefully I won’t have missed anything!

Toss the pumpkin in 2 tbsp of olive oil, a little salt and roast on a tray in the oven for 1hr, turning occasionally.

20 minutes before the pumpkin is ready, very gently fry the onion in the remaining 4 tbsp oil for 15 minutes until soft and golden-brown in colour. Add the garlic, cinnamon, and chilli and fry for a further minute.

Add the potato and fry for a further 5 minutes, taking care not to burn the garlic. Add the pumpkin and the vegetable stock, and simmer for 20 minutes, until the potato is cooked.

In the meantime, prepare the garnishes;

In your smallest pan, melt the butter until it foams, and add the cinnamon and pine nuts and fry until the nuts are golden brown. Remove from pan and keep in a warm bowl so as not to burn them.

Mix together the yoghurt, milk, and garlic and salt.

Blend the soup, return to the pan, add the coriander and season to taste.

On Facebook
Newington Green
Tuesdays
(1) We used to have chickens, which I illegally snuck over from France in a cardboard box. I was stopped at Dover, customs searched my van as they often do with vans, looking for illegal immigrants. There were a couple, but customs didn’t find them. I drowned their squawks with loud techno. These French chicks were hardier than the British ones I bought. Unfortunately I stepped on one by mistake when they were let loose in the house (my daughter called me “murderer” for months after that) and the other got eaten by a fox, leading to days of mourning.