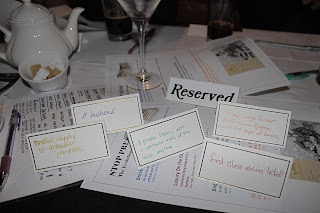 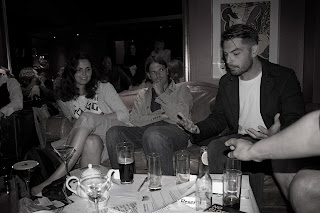 Neil Boorman on the right. 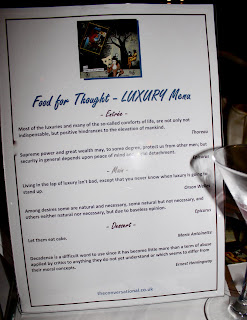 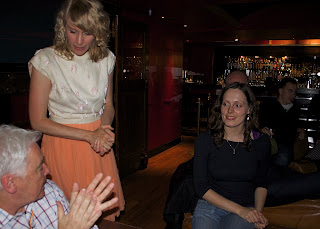 Michelle on the left 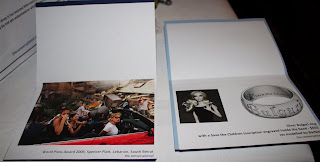 Thought provoking cards on the subject of luxury 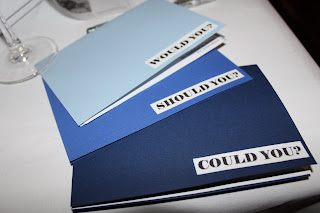 I love talking but would I like an evening of ‘guided’ conversation? This is the aim of Michelle Newell, a young Australian woman who has started The Conversational, a monthly event in Soho.

The theme of the night that I attended was ‘Luxury’, particularly pertinent in today’s recession. We were asked to write on a little card something we desire that we would consider a luxury. Answers were varied from ‘an endless supply of cashmere’, ‘a private library with a view of the Welsh coastline’ to ‘a husband‘ (er, that was me).
The author Neil Boorman who wrote ‘Bonfire of the Brands’ attended, giving a little talk on why he burned all of his luxury branded goods in Trafalgar Square.
He described his addiction to brands, how a purchase made him feel good “little confidence pills”, but this was a ‘high’ that didn’t last.

We asked him “How do you shop now?”

“No Prada, that’s for sure, just simple generic goods. Vintage, although of course that has it’s own chic, it’s own ‘brand'”

“But what about quality? Don’t good brands give you goods that last?”

“That’s a myth, luxury brands are often made in the same Asian factory as Primark for instance. ‘British’ brands like Burberry aren’t made in Britain. I once spent a fortune on some fashionable flip flops. After two weeks they broke. I took them back, they were replaced. After two more weeks, the new pair broke, again they were replaced. This happened again. In the end the shop staff said to me ‘well they aren’t really for wearing’. Brands form identity. If I wanted to feel confident for a business meeting I’d wear Christian Dior. I had different brands for different situations.”

I think of Cath Kidston. Her designs are a nod towards the nostalgia of the 1950s housewife. In an era of ‘juggling’ and ‘having it all’ working women love the fantasy of a simple life in which all you had to do is keep yourself nice with a cocktail ready for hubby when he gets in from work. Cath Kidston plays on all of that ‘surrendered wife’ stuff, which is why it is so successful. Again sites like Etsy, which sells home-made goods by individuals, is an example of this backlash against branding. (In Neil’s book, he points out that ‘branding’ has an older meaning, something that you did to slaves and animals).

Neil again: “My mother made her own clothes. You didn’t need to rely on brands, people had the confidence to throw a look together. We need to return to craftmanship”

I ask Neil: “To what extent is it a class thing? The working class tend to ape upper class behaviour, as if by buying the same brand you will become acceptable in that class. That’s why chavs buy Burberry”

Neil: “Absolutely. In London smokers tend to buy American brands of cigarettes like Marlborough. If someone in London buys Benson & Hedges you think, do you live on a council estate? Are you from up North? I come from working class background in the Thatcherite era. All the pikey kids had the best stuff: the Star Wars lunchbox, the Pringle sweaters…”

“It’s a vicious circle: you spend more time at work to earn more to buy brands. Time is not a luxury, it’s a neccessity because it’s finite. Brands are the consolation prize for working.”

Somebody says “there is no replacement for glamour though..”

Neil interrupts “Glamour is a cold, lonely place to be…look at Victoria Beckham, she never smiles, her skin is too tight.”

I ask: “So warmth is the opposite of glamour?”

This is a subject worth thinking about. And that’s the aim of The Conversational, to inspire, forge new pathways of thinking…

Next to me a man sums up class in a nutshell:

I wonder about class, branding and food.
Neil adds:

“The whole Fairtrade Organic trend is a middle class guilt trip. Being green is a status symbol. We don’t have the luxury to grown our own food.”

Epicurus, a philosopher who lived in 341 BC, who has become synonymous with excess, luxury, indulgence, actually recommended escaping the idea of status with a frugal ‘self-sufficiency’ life style.
The roots of the word luxury are discussed here. From the 13th to the 17th century luxury was a perjorative term. It changed when monarchical courts became public and everybody aspired to flat plates and salt.

“We all live in a civilisation of kings now. We don’t eat in season, we are all fat” said Neil.

Another question:“Who would break the law to achieve their luxury?” A few hands up.
Andy Warhol once said “Nobody can buy a better coca cola” Modern brands can mean either democracy or homogenisation depending on your point of view. I once met a Coca cola executive who explained that the company aims to provide coke at affordable prices in every country of the world.
Then ensues a discussion on how Mexican coke is better for it uses real sugar cane.
Afterwards I ask Michelle why she set this up:

“I missed the sort of conversations you have when you are a student where you exchange ideas not just talk about mundane everyday things.
It’s a salon des idées, but also an opportunity to come together and talk about meaningful things”

I say that it’s very un-British. One of the things I liked about living in France is their lack of embarrassment in talking about philosophy and politics. British people are funnier, but any sort of intellectualism is frowned upon here.

“It’s very un-Australian too” says Michelle “But I believe the time is right for this kind of thing, anything that promotes community spirit, like your underground restaurant”

Free: the talks will take place monthly at 23 Romilly Street in Soho. To attend contact Michelle for these stimulating evenings at www.theconversational.co.uk