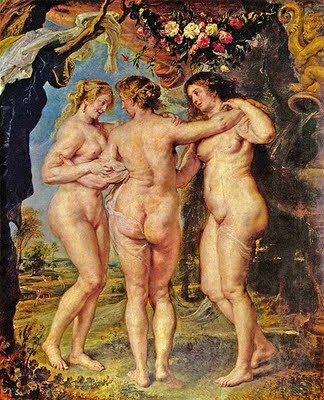 The Three Graces by Peter Paul Rubens
I was asked by Rude Health to do a ‘rant’ by their bandstand at The Real Food Festival. I got there late, having mistaken Olympia for Earls Court, and literally ran on, grabbing the mike as I staggered forward in my pink high heels and hat. My subject was ‘allergies’, especially appropriate during Food Allergy Awareness Week. Allergies are the bane of every chef’s life, especially if, as in my case, you do a fixed menu. There is a difference between food allergies, intolerances and aversions. The first gives you hives, the second gives you gas, and the last means you simply don’t like it. You’d be amazed how many people in the latter category ‘upgrade’ their aversion to a full-blown allergy when ordering in restaurants. Short of demanding that your guest has a blood test on the spot to determine a positive IgE antibody reading, the restaurateur is in a helpless position to rebut these claims. My own sneaky technique when faced with, say, a guest suffering from a ‘dairy allergy’ is to exclaim: “What a shame! I’ve got this extensive and expensive cheeseboard, and poor you won’t be able to try it…” The reaction can often be: “Oh maybe I’ll have just a little bit…” accompanied by an embarrassed giggle. It’s not only hard for professional chefs; having a dinner party has become a nightmare for a host. Between the vegans, the vegetarians, the pescatarians, the wheat free, the dairyacs, the coriander haters, the ayuverdics(no garlic,onion,mushrooms) and Atkins dieters, the hostess ends up with nothing to offer everyone, maybe just a bowl of porridge, with soy milk of course, unless she’s the kind of masochist that wants to do a separate meal for each guest. Despite reports that allergies have grown in the last decade by 18%, the percentage of genuine food allergies is low. In a recent Californian study by Dr Marc Riedl, while 30% of adults believe they have a food allergy, it’s actually only about 5%. The rate is slightly higher for children, 8%, but most outgrow their allergy by the age of 12.
Lets take a look at food allergies around the world: they are highly heritable and often have a genetic or geographic bias. As much as 70% to 90% of Asians are lactose intolerant, only 10% to 15% in Westerners, while 50% of Asians cannot drink alcohol. The Japanese can be allergic to buckwheat flour, used in soba noodles. Irish people, particularly those on the West Coast, suffer from coeliac disease, they cannot digest gluten. Nightshade vegetables such as aubergine, peppers, tomatoes and potatoes can cause arthritic symptoms. An allergy to celery of all things is common in Central Europe. Peanut allergies can lead to anaphylactic shock or death. Some people hate coriander, it tastes like soap or worse, bedbugs, the origin of the word ‘coriander’. On the other hand, it’s considered a folk remedy for diabetes.
We must also distinguish between fussy eaters and religious taboos: restrictions such as halal meat for muslims and kosher food for Jews are well known but did you know that some religions, Jainism for example, advise against eating things that grow underground for, if you eat the root, you kill the plant. Old world religions can be suspicious of new world ingredients. Imagine our diet today without peanuts, potatoes, tomatoes, chocolate, coffee, tobacco. Things we don’t eat are famine foods: associated with desperate times and terrible poverty: in Iceland and parts of Sweden, for instance, mushrooms are considered an animal food and only eaten in times of hardship. Another food edict is against salt: the author Jeffrey Steingarten writes that after a worldwide test conducted by the World Health Organisation, only 8% of people are sensitive to salt, that there is no proven link between high blood pressure and salt, and that most of us can eat as much salt as we feel like… One of my most frequent complaints about other home restaurants, which must reflect home cooking in general, is undersalting food. I use good quality sea salt while cooking, in this way I minimise the use of salt at the table.
Having spoken to people with very real allergies, tested and proved by blood tests, I know they are irritated by the fakers. My beef is with the food intolerance group: it’s funny how the women (yes it’s generally women although I do know a few men who are also neurotic about food) who complain of wheat or dairy intolerances are invariably skinny with concave stomachs. (Hey, where do they fit their reproductive organs?) Why don’t they just admit they are ‘being single forever/not being able to fit into Topshop clothes/can’t cope with not getting society & media approval’ intolerant? That’d be a bit more honest.
As far as I’m concerned, they are just on a diet. Which is fine, but why come to a supperclub if you don’t like to eat?
I ‘think’ this is how to listen to my rant: http://www.sendspace.com/file/w0q6nz