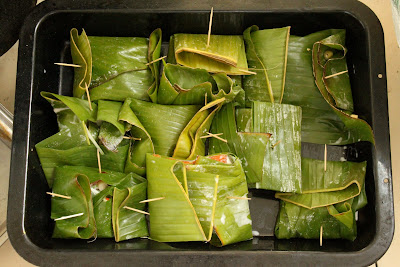 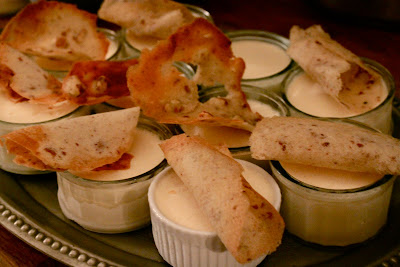 Saffron kulfi with cardamom and almond tuiles
If my supperclub is a random but accurate sample of what’s going on in the world, it looks like the Conservatives will win. Practically every guest was going to vote Tory. This has made me so depressed that I’ve had difficulty rousing myself to write this blog post. Those of us who lived through the stultifying Thatcher and Major years are not looking forward to a Tory government.
Another lesson learnt: don’t put coconut milk in with rice in a rice steamer. You will find that your fish is cooked, you check the rice to go with it and…it is raw. You try to switch on the rice steamers and they will not remain switched on. You resort to sellotape and tape down the switch. Ten minutes later you smell something burning and realise that your rice is burnt. All of this was done under the unrelenting gaze of the BBC Moneywatch cameras (I think they must be making a feature film on me). If, when it is screened in July, you see a harassed and hysterical MsMarmitelover screaming helplessly “You cunting Teflon” at an inanimate object, picking burnt bits, trying to rescue some rice, hyperventilating “I can’t cook rice except in a steamer” to a strange first-time waitress well…please understand. This was scary. Probably the biggest cooking scare I’ve ever had. The cameras just kept turning, focusing in ever closer on the caramelised bottom of the rice steamer, the blobs of rice everywhere, counter, plates, in my hair. I wanted to stop them but realised this would make me seem even more uncool. So much for my unflustered, I can cope with anything persona that I dimly fantasised that I would project on the telly screen. It was car crash cooking. Embarrassing.
I mentioned it on Twitter and apparently this inability of a rice steamer to cope with coconut milk is well known. The trick is to use coconut powder instead. Or just add the coconut milk at the end.
Menu
Pimms with mint, cucumber and strawberries
Rigatoni puttanesca
Banana leaf wrapped red sea trout with Thai spices and coconut (the banana leaf ‘en papillote’ style of cooking really retains the moisture and flavour of the fish)
Coconut Rice
Neal’s Yard cheese board with Dorstone goats cheese, Ardrahan washed rind cheese, Coolea (made by a Dutch couple who moved and shipped Dutch cows to Ireland) and Colston Bassett Stilton, a fig and walnut wheel, oat cakes and almonds.
Cardamom and almond tuile
Saffron kulfi
Coffee by Douwe Egberts (cafetiere blend)
Chocolate truffles made by moi.
I tried a couple of tuile recipes, one with caster sugar, the other with icing sugar. Perhaps the icing sugar version turned out thinner and crispier. Once you get the knack of spreading a circle of the batter with your spoon, not too thin, not too thick, it’s a fun thing to make and matched well with the creamy kulfi.
Even a table of British-Asian guests (Tories and interestingly, concerned about immigration, talked about the differences between generations) loved it. Compliment indeed. They asked when I was going to do an Indian night….soon….
Another table of guests had come all the way from Essex. One of the ladies was a life coach and personal trainer.

“Where are you going next?” she asked me with a significant look.
“What do you mean?”
“Well you can’t start a restaurant can you?” she pronounced
“Can’t I?”
“Ooh no. It just wouldn’t be the same” She paused then announced “What you need is a franchise”
“Er how would that work?” I asked politely.
“Sell your idea to other people, train them how to do it, set up other home restaurants…”

I was a bit tired so couldn’t wrap my brain around this idea. Does she mean…buy lots of other houses, put an Aga in each and er…rent it out to people on condition they hold a weekly dinner for strangers?
I would have added ‘buy a Smeg fridge-freezer’ but I spent 1.5k on one which was delivered last Friday. As I unwrapped the boxes inside, I noticed one of them was broken, one of the handles kept coming off. Saturday I saw the seal at the top of the door was coming away. Sunday, the door wouldn’t shut, again, out with the sellotape. Again. Never buy major mechanical appliances under a Mercury retrograde.
I didn’t take many pictures…too hard with a film crew there. My teen did my makeup for the filming. As she worked she said expertly

“I need a shiny blusher for flash photography”

She’s supposed to be revising for her GCSEs but appears to have watched an awful lot of Youtube tutorials of how to apply makeup instead. She has also started a blog about music and, possibly, makeup…
*May Day as a call for rescue comes from the French ‘M’aider!’ ‘Help me!’