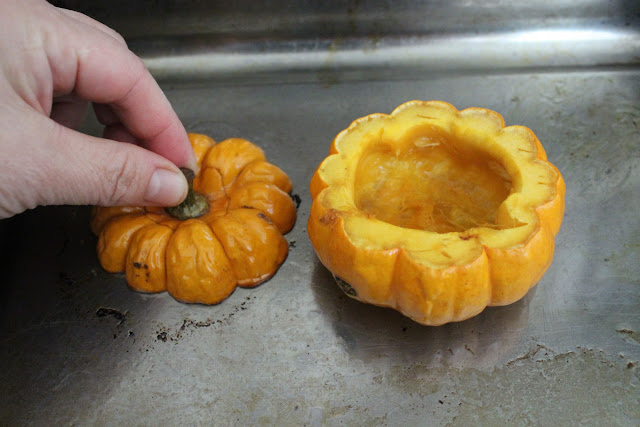 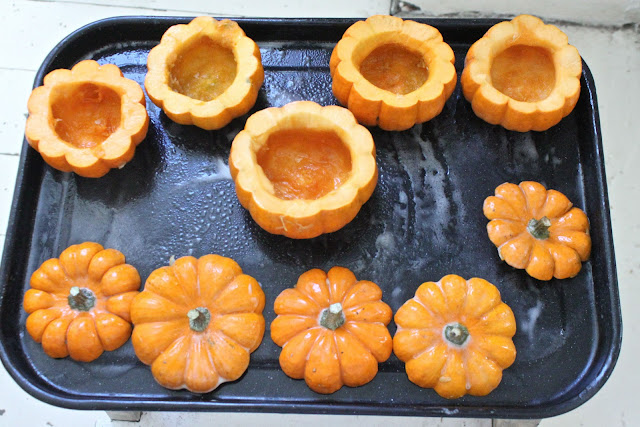 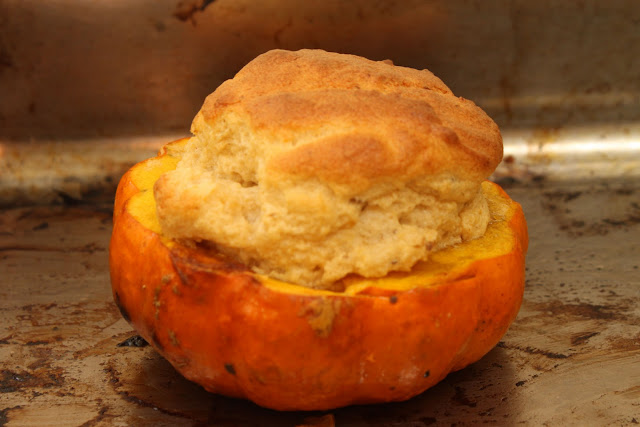 Aren’t they cute, these baby pumpkins? Last night I cooked a birthday dinner for Ryan Jarman of The Cribs and his girlfriend Kate Nash. Ryan’s favourite dish is Macaroni Cheese, so that was on the menu. Staying seasonal I also made them soufflés in hollowed out pumpkins (although really I should have made Pumpkin soup, the title of one of Kate’s songs). Here is the recipe:


Slice off the top, making a lid, from your munchkin pumpkin. Carefully scoop out the inside, discarding the seeds. Rub or spray the inside and out, plus the baking tray, with oil then rub a little salt inside the cavity of the pumpkin.
Place the pumpkins and the lids, cut side down, onto a baking tray and roast at 200C for ten minutes(or Aga roasting oven). You don’t want to overdo these, you don’t want them to collapse.
On another baking tray, or the same, if you have room, place the chunks of butternut squash, drizzle some oil over them, season and roast for the same amount of time or until soft.
Remove the pumpkins and the butternut squash and leave to cool.
Purée the butternut squash in a processor.
Separate the eggs.
Then, in a small saucepan, on a low heat, melt the butter, adding the flour and the milk to make a thick white sauce, stirring all the while, adding the mustard and seasonings such as salt and pepper.
Remove the pan from the heat and add the egg yolks, the cheese, the walnuts and the puréed butternut squash, mixing thoroughly or pulsing in the food processor.
Just before baking, whisk the egg whites until they are stiff peaks and fold into the soufflé mixture.
Fill the empty Munchkin Pumpkins with the soufflé mixture and bake in a normal oven at 200C(Aga roasting oven, bottom rung with cool shelf, or 3 oven Aga , 4th rung down in the baking oven) for about 25 minutes until the soufflé is risen.
I tip a little of the flavoured oil onto the soufflé, lean the little ‘lid’ against it and serve quickly. The teen and I are fans of both Kate Nash and The Cribs. We went to see Kate at a small gig at Rough Trade, three years ago. My teen saw The Cribs at Brixton last year where she was thrilled to catch Ross Jarman’s drum stick. (She also has pictures of Ryan, shirtless and crowd surfing, up on her bedroom wall).
I missed the first part of Kate’s gig because I was at the London Restaurant Festival awards where I was nominated for the ‘One person’s passion’ award which was won by Jeremy Lee of the Blueprint Café. I was very pleased to be nominated however. At the event, I met John Torode, Charles Campion and Fay Maschler, the latter two one only knows usually from a tiny photograph next to their byline. I think this year’s London Restaurant Festival went very well and, in the run up to the Olympics especially, is a great idea for highlighting the amazing range of eating out options in London, of which supper clubs are an added extra!
Apart from restaurants doing special menus for the festival, I enjoyed their other events: for instance a hard core foodie quiz at Le café Anglais, a restaurant I’ve wanted to try for ages. They served delicious food which hinted at clues to the quiz, Piedmontaise peppers for instance (Question: which food writer gave a recipe for these? Answer: Elizabeth David). Anne Robinson was a tough but fair quiz mistress.
The day after there was a brilliant debate: ‘This house believes that French cuisine is a spent force’ with Rosie Boycott and Janet Street Porter arguing for the motion and A.A.Gill and Jonathan Meades (who actually lives in France) arguing against.
We were asked to give our votes at the beginning of the debate and then again at the end. I started out being against the idea. French food may be a bit stuck but has a depth and knowledge that the British are only just beginning to approach. Having lived in France for seven years, I did think Rosie’s assertion that you can’t get fresh vegetables in French markets very odd and wondered where she holidayed. It’s true that in the South of France, where I often visit, many of the restaurants are pizzerias, the hours at which you can eat are very restricted and young French women are no longer cooking as their mother’s did, preferring to use the equivalent of French ‘Iceland’, Picard (but which is miles ahead in terms of food quality). I consider myself a feminist, but one could argue that feminism, women going out to work, has not been good for food, for the family diet.
A.A.Gill was crisp, clear and funny, Janet Street Porter and Jonathan Meades resorted to a ping pong slanging match of French versus British food but Rosie Boycott finally won my vote by a reasoned speech which asserted that French cuisine used to dominate the world, there was a French restaurant in every city and town but it doesn’t any longer. People are more likely to go for an Indian, a Chinese, sushi, Mexican ect.
The ‘girls’ lost the debate by five points but they won the swing.
I also attended an event hosted by Grey Goose vodka which was original and theatrical, very much in the style of events hosted by Bompas and Parr. In an elegant town house near the Post Office Tower, walls painted French grey and the girls wearing old fashioned grey dresses, looking like something off the set of Turn of the Screw; we were treated to music, tea, Grey Goose cocktails and intriguing interactive experiences. Punch Drunk, a theatrical company, designed installations in each room; one I was taken into blindfolded, given small shot glasses to drink and stroked by cool strange hands; another there was a woman standing in a wheat field planted in a drawing room.
One of the exciting things about the current British food scene is that the food world is drawing many of it’s influences from the art world and several chefs (Blanch and Shock, the aforementioned Bompas and Parr,  the themed meals that I host, plus events such as The Experimental Food Society) trained not at catering college but at art school. This leads to a more thematic and conceptual approach: food is more than something you eat, but a provocation, an interactive sculpture that you may consume. The British music scene is famous for musicians that started out at art school (Brian Ferry, David Bowie, John Lennon) and I wonder if we are seeing a similar development in British food. 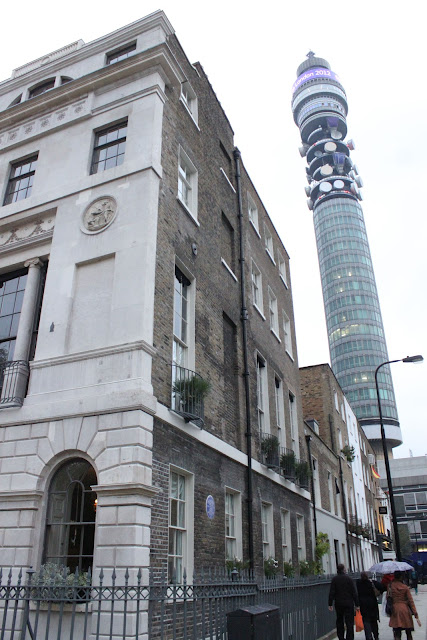 Roger Fry lived in this building 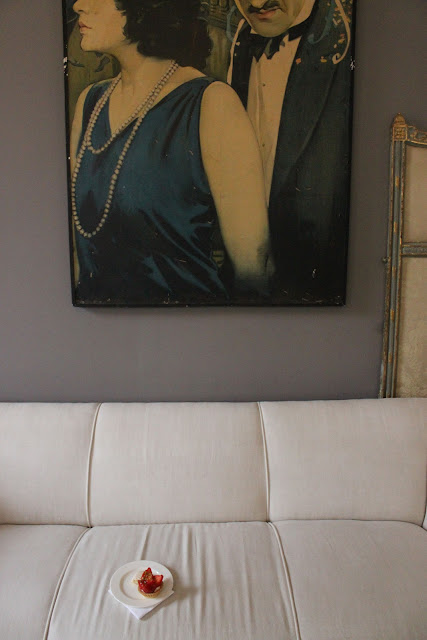 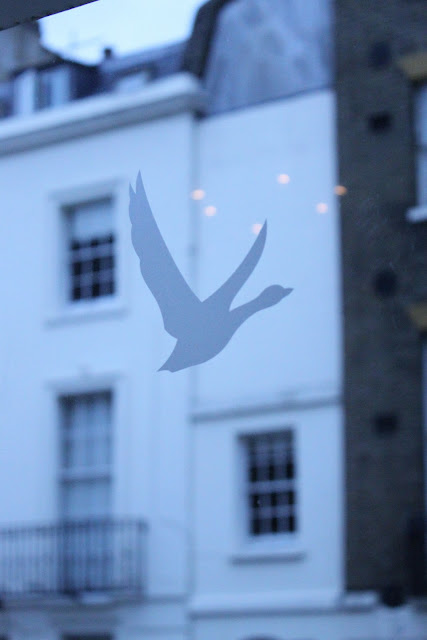 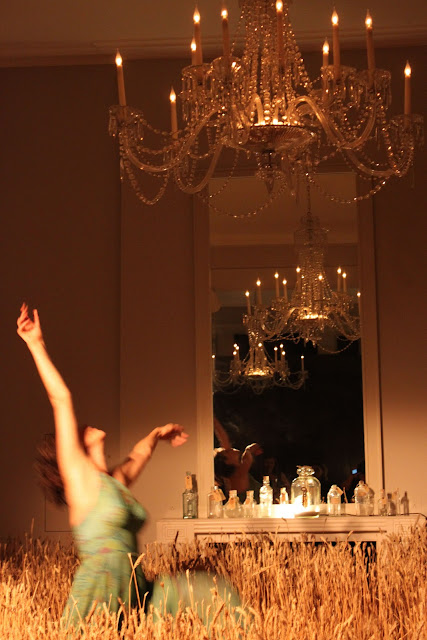 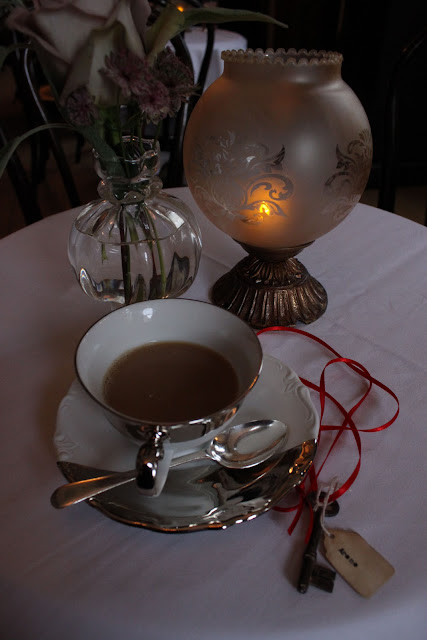 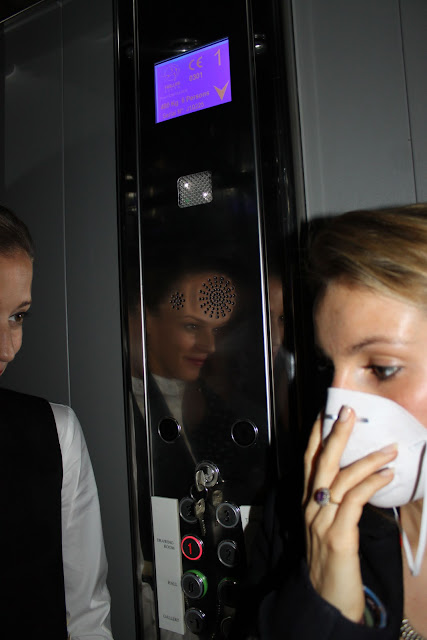 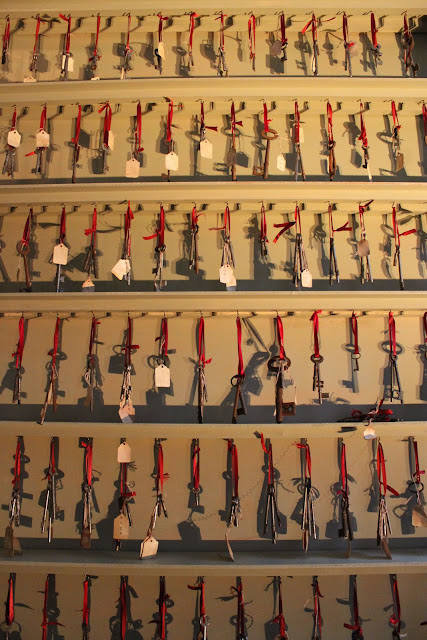 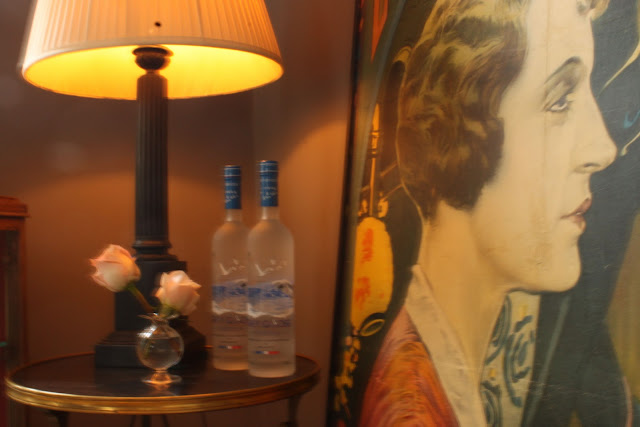 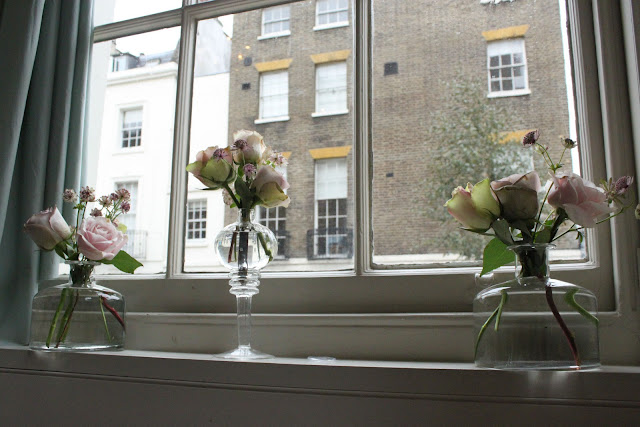 Previous Post: « New cooking: Dominic South at Visitor boat
Next Post: Alice Planel’s Dinner Exchange and my attempt to be a war photographer »