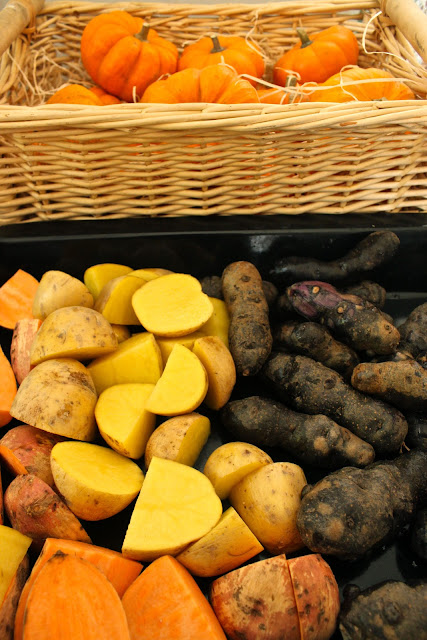 Three types of potato: charlotte, sweet and purple. The purple ones had an interesting earthy taste and thick skins. They reminded me of the original South American potatoes, some of which I used to buy, sold hot in brown paper bags by indigenous women in full skirts and bowler hats in Cuzco, Peru. 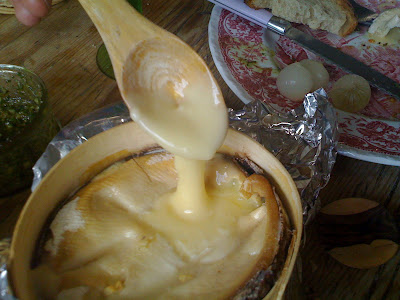 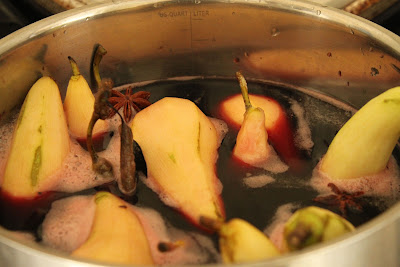 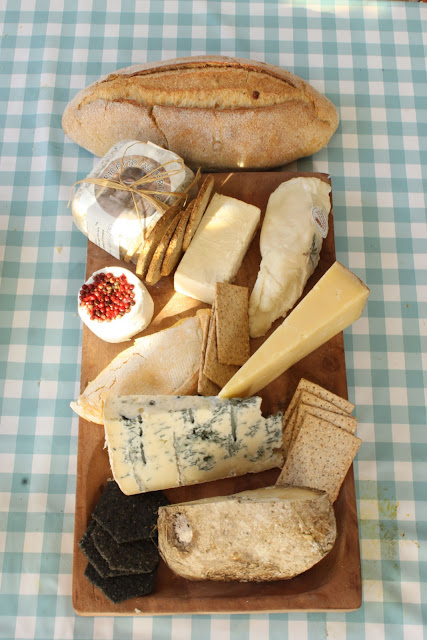 Cheese board
On Sunday we had one large table with mostly older guests. Each guest had a history, a life to recount. This meant as the afternoon wore on, the light dimmed, the candles were lit and the fire crackled in the background, it became battle of the anecdotes.  My dad told of his early career in newspapers and how he passed on interviewing the Beatles, his biggest journalistic regret.
“They were playing and the paper asked me to cover it. I turned up and you couldn’t hear a thing, there was so much screaming. It was awful. I just thought this is a waste of time, I’m hungry. I’ll go off and get something to eat, call my contact at St. John’s ambulance and find out how many girls fainted and boomp, story done! I was such a music snob, I was into jazz. I didn’t take them seriously.”
Another guest was a former BUPA executive who had retired to run a lap dancing club called ‘Chompers‘, the best bit being that he got to audition the girls. He offered The Teen a job, saying she’d earn £700 a night “Pay off your student loan in no time”. He was disappointed that ‘vacherin’ meant cheese not beef (“vache, that’s cow isn’t it?”)
He told a hushed table about his impoverished childhood in the Elephant and Castle area of London. “My dad was so poor he had no shoes, he walked to school barefoot on the cold cobbles” he started.“Living next door to my house was a little black boy. Now this was in the era where there were few black people in Britain, before Windrush. He was my best friend. He lived with his sister and mother. One day I was invited to a family party at his house and for the first time his dad was there. His dad played piano very well: I was sat on one knee and my friend was sat on the other. My friend played chopsticks at one end, I played something else at the other while his dad was composing a song in the middle section. At this party my friend, Anthony, found out that his mum was in fact his grandmother and his sister, Kitty, his mum. They hid this because she’d had a child out of wedlock but now they had to tell Anthony the truth because his grandma/mum was ill with cancer and she wouldn’t be able to look after him any longer.”
Now my guest paused. The table was gripped by this affecting tale, my heart ached for his little friend Anthony.
“You’ll never believe it” my guest continued dramatically “but Anthony’s dad was in fact Duke Ellington, the famous jazz musician. He was actually composing his most famous song while I was sitting on his knee. Anyway the world turns, things move on…” he fluttered his hands in a shape that denoted the passing of time “business was good for me so I was going to New York with my wife. I thought I’d get in touch with Anthony, who had moved to America to be with his dad. He was Duke’s only son you see, although Duke had children by several different ladies. Anthony was absolutely delighted to see me, remembered me very well and our days in the Elephant and Castle. He invited me to his dad’s old jazz club in New York. Anthony played with a house band there and Woody Allen was on clarinet. It was marvellous. ”
We all nodded, pleased that things had worked out for Anthony and impressed by my guest’s ability to rub shoulders with the stars. “Do you still see Anthony?” another guest asked.
“Oh yes, he’s still alive, though Duke passed away. But we are still in touch”
After my guests left I thought I’d google Duke Ellington. It turns out he did have only one son Mercer Ellington who is dead. I’ve found no trace of Anthony Downs Ellington. So what do you think? Is the story true? There was so much detail… or was it just a great story? 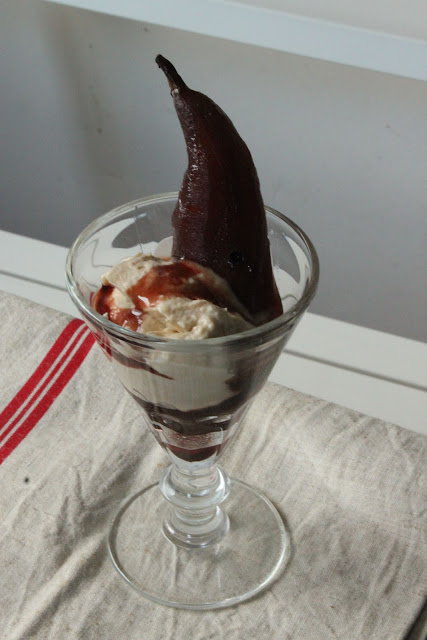 Pear from my garden poached in red wine, garnished with cream, meringues and creme de marrons, a kind of ‘mont blanc’ mess.
Recipe for Poached pears in red wine
For four
4 pears, I used Conference, carefully peeled
1 star anise
1 stick of cinnamon
1 bottle of red wine
200g of sugar
Place all the ingredients in a pot and simmer for half an hour to one hour until pears are tender but not falling apart. Then take out the pears, set aside, and reduce the red wine/spice/sugar solution until it is of a syrupy consistency. On the Aga I can just leave the pan on the black enamel for a day and it becomes syrup but on a normal stove stop this would take approximately one and a half hours on a low heat.
For the ‘Mont Blanc’ mess
1 pot 300ml of double cream
2 small meringues, crushed
4 tablespoons of creme de marron
Whip the cream until it is thick, add the crushed meringues and stir. Mix in the creme de marrons so that the cream is streaked with the sweet fudgy brown paste.
Just before serving: warm the pears if you wish, put in a tall glass or cup, drizzle some of the syrup over the pear, add a quenelle of the ‘Mont Blanc’ mess then drizzle some more of the syrup over the top. Or you could put the syrup in a jug and serve it on the side for your guests to add as they wish.
A perfect Autumn dessert.

Previous Post: « Alice Planel’s Dinner Exchange and my attempt to be a war photographer
Next Post: Yurt »