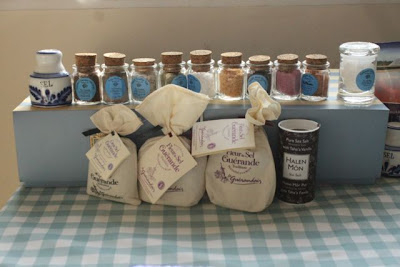 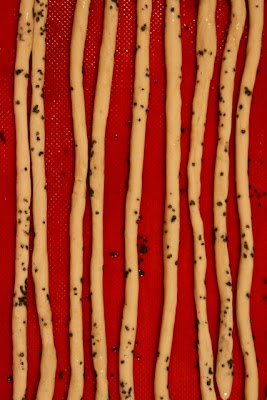 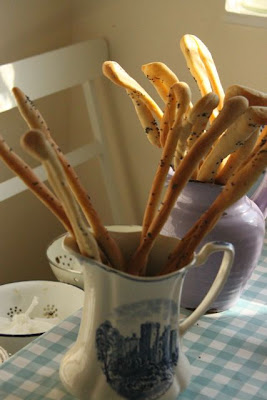 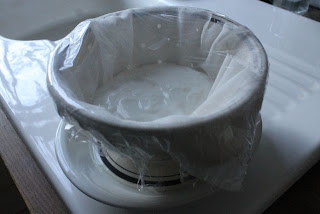 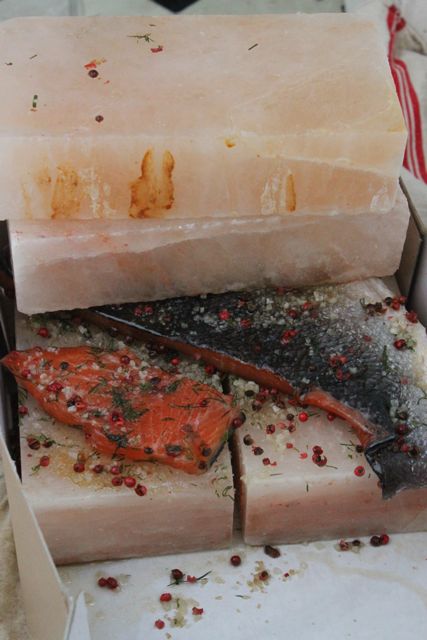 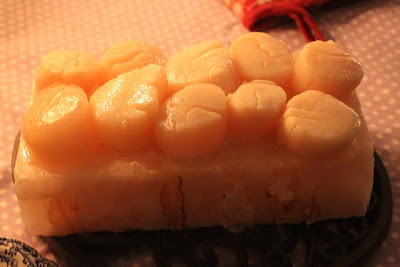 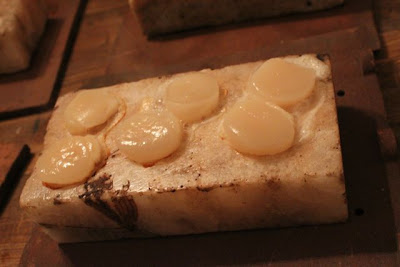 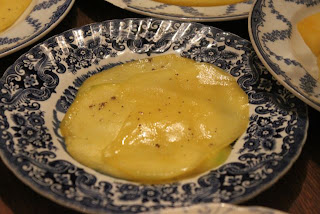 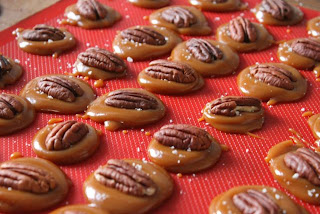 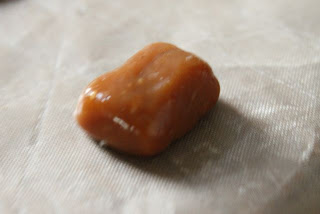 Sunday I spent preparing the salt blocks. You need to heat them up slowly to 500F to 600 F before using them for the first time. Using my three oven Aga, I heated them on each shelf for 15 minutes, working my way up in temperature from the bottom shelf of the simmering oven to the top shelf of the roasting oven. This took one and half hours in total. Mark Bitterman says in his book Salted that the blocks are at the right temperature when you put your hand a couple of inches away and it feels uncomfortably hot.
I lugged back four salt bricks from New York along with a vast selection of salts bought at The Meadow, 11 kilos in total  (at customs I confessed “I have alot of white powder in my baggage”). These bricks, especially selected by Mark Bitterman, so that they didn’t crack or explode in the heat, were fine. I also bought two much cheaper blocks from a horse suppliers ‘salt licks’ Bitless Bridle, however these were of much poorer quality and cracked in the oven.
You can also heat the salt blocks up on a gas hob, again starting slowly and gradually increasing the heat to 450, 500F.
In the tests that I did it seemed that drier foods worked better on the salt blocks, the wetter the food, the saltier it became. You want a slight seasoning. If the food is rather wet, like scallops, you want to cook it quickly, so a high temperature is desirable.
To clean and reuse the salt blocks: wait until they have cooled down then give them a good scrub.
I also used the salt blocks for curing salmon. I simply put the salmon sides with sugar, herbs and pink peppercorns between the cold blocks of salt and left them for 12 hours. It worked perfectly.
I’m afraid I don’t have lots of pretty pictures of the food I made that night, because I was so busy! This week has been pretty full on, three events, whereas I normally do one.
Tomorrow I’m making lunch and doing the wine and snack bar at the Fire and Knives Mixed Grill food conference at Conway Hall in Holborn. It looks like a fascinating event, with many short talks on different foodie subjects, cabaret acts and an ether bar by Bompas & Parr. I will be giving a short talk and tasting of different salts at 3.50 pm after lunch is out of the way.  Tickets can be bought here £20
Lunch tickets can be bought here £25.

Vintage crockery and glass ware will be provided by Bristol Vintage

Snack Bar:
Wine for sale by the glass or bottle
Toasted taleggio and St Johns sourdough sandwiches
Small plates of olives ect
More stuff that I will think of later today!

I’m providing proper cups and glasses as I hate disposables but if people could bring them back, would be much appreciated!

Leave a Reply to Dom at Belleau Kitchen Cancel reply