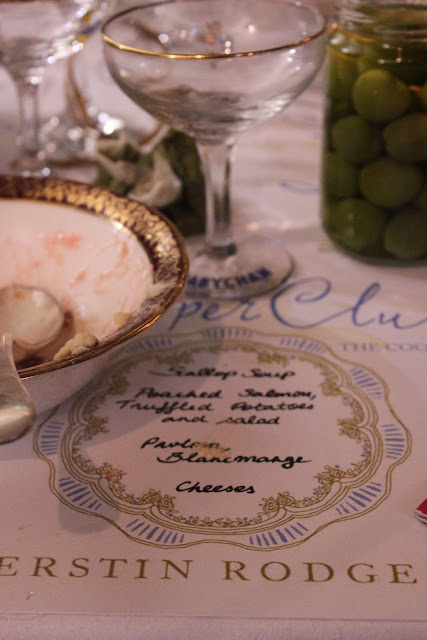 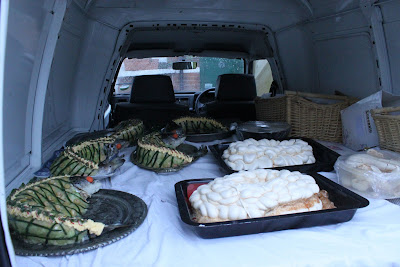 Loading up the van at 5.30am and driving very very slowly down to Conway Hall. 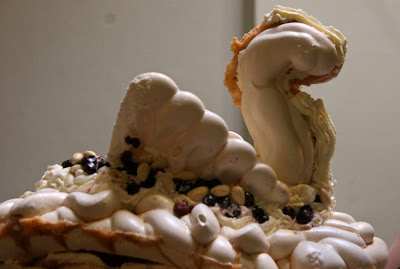 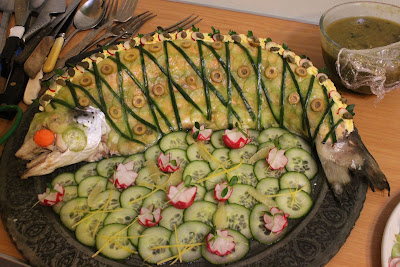 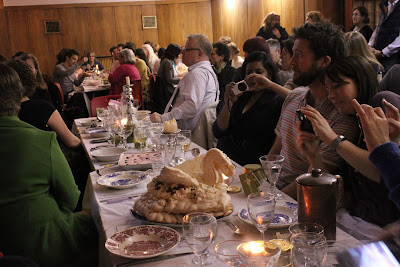 I’m sure there were great and interesting talks at the Fire and Knives Mixed Grill event on Saturday, it’s just that I didn’t get to see any. I did the catering. I made a four course set lunch for 70 people and ran the snack/wine/coffee bar. After only two hours sleep on the Friday night, I spent Saturday in a spaced out daze, trying to remain upright and vaguely polite. It would have been a shame to have undone all my hard work by snapping irritably at all the movers and shakers from the food scene that populated this event. 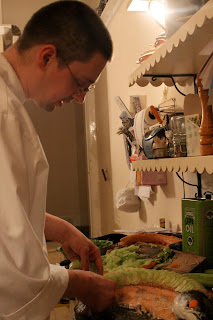 I couldn’t have done it without James Benson of My Cotswold Food. This private chef is an expert at outside catering. He never sleeps. He’s like some sort of catering shark, always on the move, only catching a bit of shut eye while stirring a pot. James had even less sleep than me on Friday night, and that was in my shed! He lives in his chef’s whites.
Conway Hall, where the event was held, has only one tiny domestic oven and one small fridge. Clearly, as much food as possible had to be prepared beforehand.
This was the menu I settled upon: 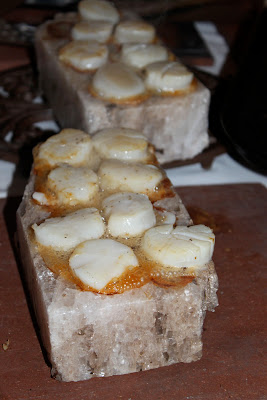 James trained at Claridges and so knew how to do classic French hotel food which was exactly the vibe I wanted. I love old fashioned hotel dining rooms, with the clinking of fork against china, of glass against bottle, the murmured civilised conversations, the silverware, the formality, the white linen, the stiff backed waiters, the domed platters. 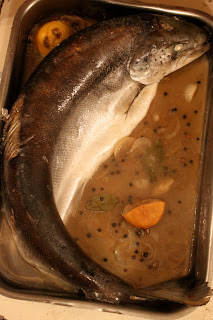 I roasted the whole salmon in the Aga. I had to do five, so this took some time. The fish has to be curved around in the baking trays to fit. I filled the trays with water, adding lemon juice and the skins, sliced onions, peppercorns, bay leaves and sea salt, and covered the top with foil After 45 minutes to an hour, I plunged in a temperature gage; when the thickest part reaches 70 degrees C, it’s cooked.
The skin came off easily.
At 3.30 am, with James’ tutelage, I was still dressing the salmon; piping home made mayonnaise into the spine, layering fine slices of cucumber as scales, criss-crossing the sides with thin strips of dark cucumber peel, as if it were a pin cushioned upholstered chair, studding the triangles with circles of anchovy olive, garnishing the back with capers and proud tufts of flat leaf parsley.
I also learnt to worship the god Clingfilm. How to transport stacks of precious vintage plates and not break one? Clingfilm. Everything was wrapped tightly so nothing jiggled.
We partly loaded up the vans the night before, I was just about to carry out the glasses and James passed on another piece of wisdom: “Don’t do that until the morning. The glasses will get condensation on them overnight and we will have to wash them again in the morning.”
James is the master of the checklist: “Serving spoons…check; salad dressing…check; serving dishes…check; glitter…check; clingfilm…check (because we will need to wrap it all up again when we drive home)”
The blancmange took forever. I loved blancmange as a kid; my mother had a rabbit shaped metal mould but she made it from a packet with cornflour. Nobody eats blancmange, ‘eat white’, a sick bay dish of choice, anymore. I made it the authentic way, soaking ground almonds in hot milk for several hours. Some guests said it was their favourite dish, that they had never had proper home made blancmange before. If having a go at home, choose a recipe that add gelatin at the end, it’s almost impossible to strain otherwise. 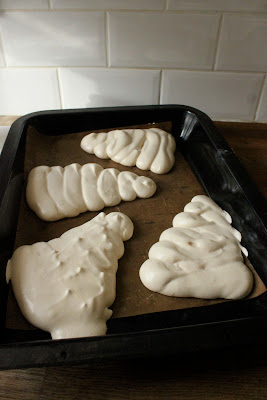 The swans? Chefs laughed when I told them my idea. Undaunted I piped bodies, wings and necks, with a few to spare in case of breakages. I added rosewater to the egg white and the cream. People gasped as front of house marched into the big hall. Each swan had it’s own character. 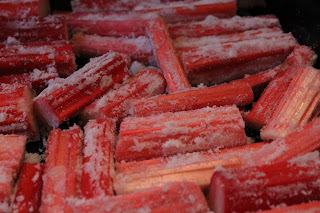 Forced rhubarb from Yorkshire is in season right now, the middle of ‘the hungry gap‘, so I made a lurid syllabub, served in glass bowls, contrasting the Barbie pink with edible glitter.
The tables looked fantastic, with blue and gold glasses, pretty tablemats, a facsimile of the cover of my book and a mix of my vintage dishes and those from Bristol Vintage, who kindly lent their plates, napkins and babycham glasses. 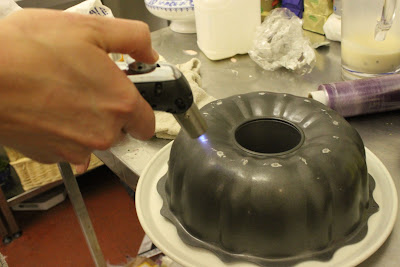 Blowtorching the mould to try and get out the blancmange. Note to self: oil with almond oil next time. 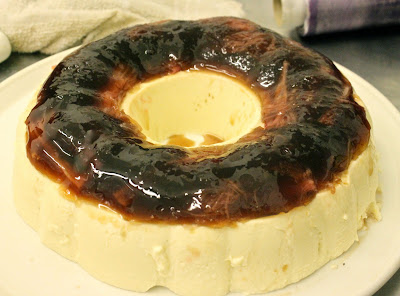 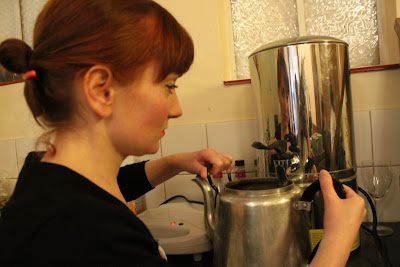 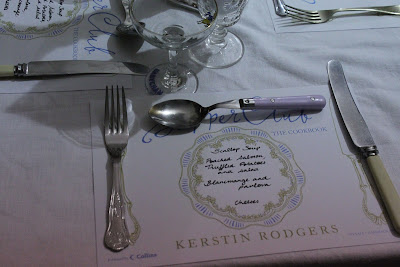 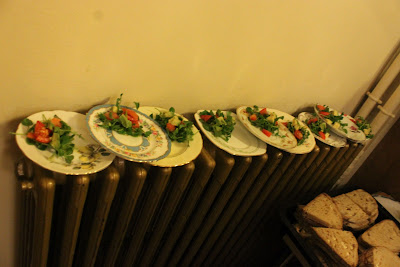 Plating up on the radiator 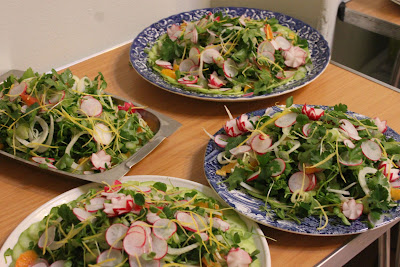 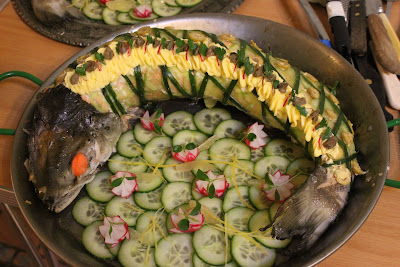 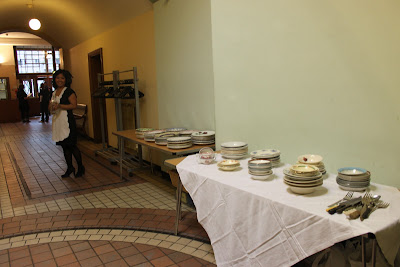 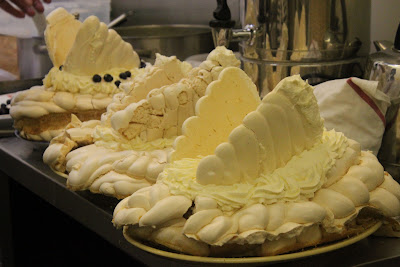 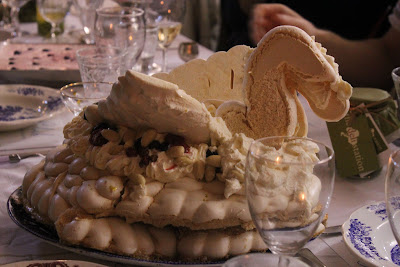 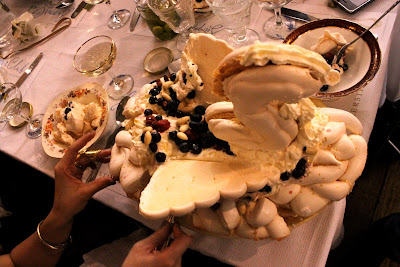 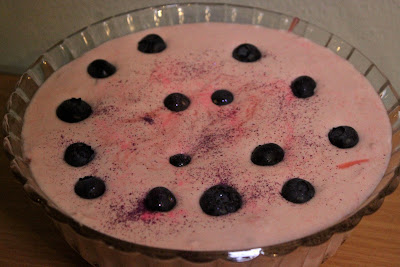 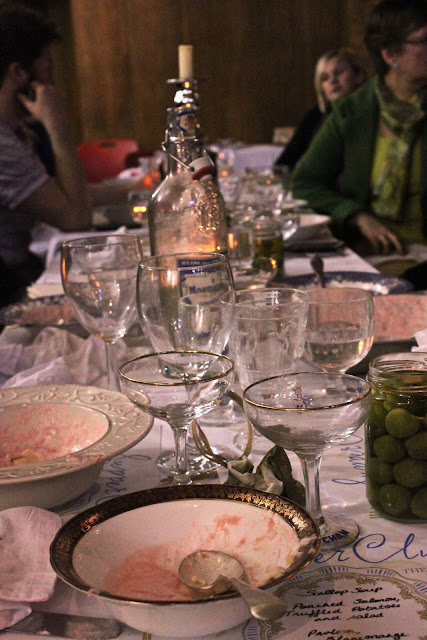 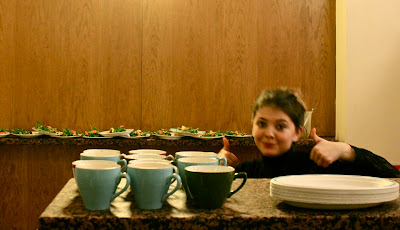 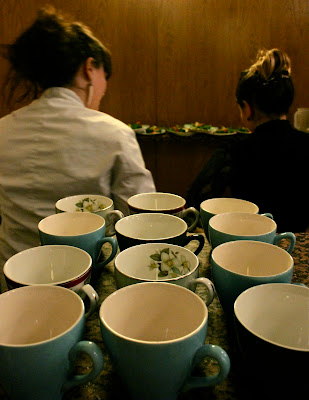 The sandwich and coffee bar, despite St John’s sourdough, Taleggio and home-cured salmon sandwiches, stayed empty and so I made a loss on the whole event. It’s not easy to make money from food.
Here is James’ blog post on the event; as a non-Londoner, he was horrified by the parking charges! And he got a ticket five minutes before free parking started.
Thanks also to Josh, Amy and Mike from Blanch and Shock; Reena Retuta, Helen Gibbons of Corney and Barrow, Yinka Opaneye, Sienna Rodgers; Maria Grist; Alissia Durbridge of Bibendum. 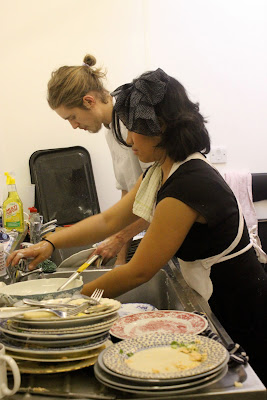