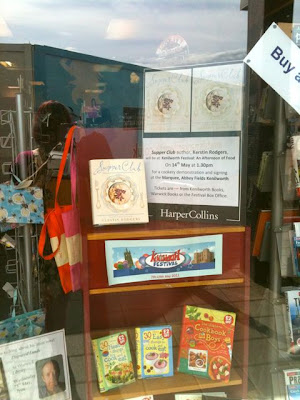 A lovely book store in Kenilworth, the first time I’ve seen my book in a shop window! I almost physically dragged customers in from outside.

Saturday morning, Kenilworth food festival, near Warwick. I’ve been asked to do a food demonstration to promote my book. Arriving by train from London, I arrive on site at 12.30, my demo should begin at 1.30. We make our way through the stalls of the food festival to where I’ll be doing the demo.
“Look at our specially built kitchen!” says the lady who will be introducing me.
I look. It’s a kitchen in a trailer.
The only food demos that I’ve ever seen are at shows like The Real Food Show, with slick shiny modern mini kitchens built around islands where women hoisting canvas goodie bags crowd around smouldering Italian chefs like Giorgio Locatelli. Chefs today are Donny Osmond for the middle aged. Only the screaming has turned into scoffing. But this kitchen is one up from a caravan.
I’ve decided to demonstrate three simple dishes which are, hopefully, interesting but easy so I won’t get too flustered.
They are: