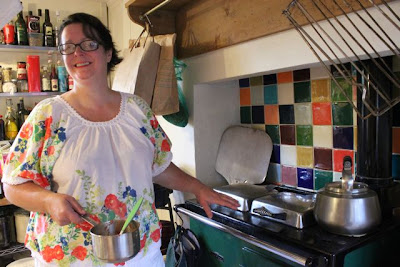 Sara at her Rayburn 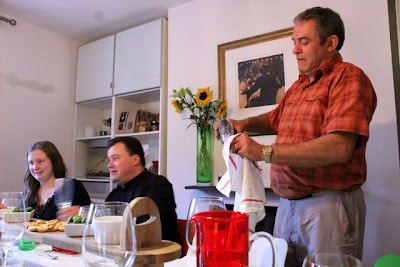 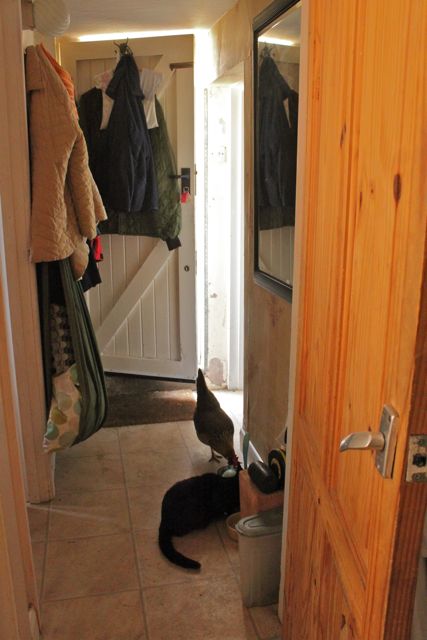 Cat and chicken feed from the same bowl

This is what I mean! This is exactly what I mean! kept running through my head as I sat down to eat at Squisito supper club, somewhere near Rugby.
Yes, professional chefs have exploited the supper club trend as have conventional restaurants. Yes, unsung sous chefs have got to promote their food in a supper club setting. Yes, it’s put a new spin on eating out/eating in. Yes, food writers/ personalities/bloggers wanting a career in food have used the phenomenon as a means of promoting themselves.
But what I always wanted to see with supper clubs was and is to taste the food of brilliant home cooks, often female, often mothers and grandmothers, who, because of their child rearing responsibilities, could never have worked in a restaurant, with it’s long hours, macho culture and evening service. One of my inspirations, beside going to Cuba and visiting a paladare, was listening to a programme on Woman’s Hour about ‘cesarine’ in Bologna, opening their homes to tourists, serving authentic regional Italian home cooking.
At Squisito, I found the British equivalent of the ‘cesarine’, Sara Chambers. She is one half of Squisito Deli that she runs with her husband Alex. It’s no surprise then that their speciality, apart from fantastic sausages made by Alex, is Italian food.
They live in a small village in a cottage with a Rayburn. From the window you can see a dead chicken hanging. In the garden is a pizza oven and more chickens. Last Saturday Sara did a stall at Kenilworth Food Festival, then came home and cooked for ten people. Their brightly coloured modern dining room was laid out with italian colours, red, green and white, alternating the coloured chairs and tableware. In the corner was a sausage making machine.
The food was simply fantastic: rich, perfectly seasoned, generous. The guests, neighbours and from nearby villages, gossiped amusingly:
“Did you see the police tried to arrest him again? He stole £50,000 from the village hall” started one guest about a local.
“AND the money from the allotments, don’t forget that” chipped in someone else.
“They’ve tried four times now to bring him to court. But every time he knows they are coming, he doesn’t take his diabetic medicine and goes into a coma! The police won’t arrest him then”
“And he’s spent it all on online poker” tutted a guest.
In the living room, another guest has left her one year old baby, looked after by Sara’s teenage daughter. His blonde curls and innocent blue eyes, whenever he is brought in for inspection, inspire all the women, including myself, to coo and sigh with baby lust. Do men feel that primeval tug on the heart strings when they see babies?
We are at the epi-centre of Britain here. Nearby is the village of Meriden, where the A5, the Roman Watling Street, runs a straight thread from my house in Kilburn, up towards Holyhead in Wales.
Turning to me, later on, diners mention that this “is Balti country you know. You get the very best Balti curries around here.” I looked at an Asian male guest who has a Midlands accent, he says “I do all the cooking at home, but I only cook Western food”. His white wife sits smiling and nodding.  It seems appropriate that in multi-cultural Britain, that ‘Middle England’ is the centre for Balti curries and great Italio-British home cooking! 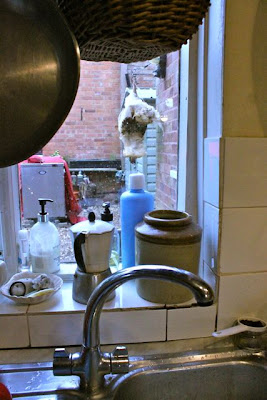 Dead chicken outside: this is the countryside after all. 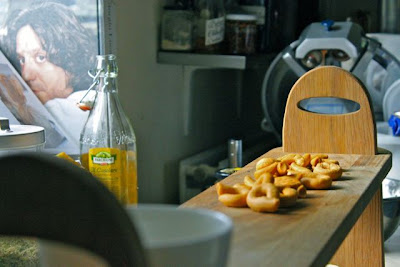 Giorgio peeking out over a Jamie Oliver anti-pasti table with cashew nuts. 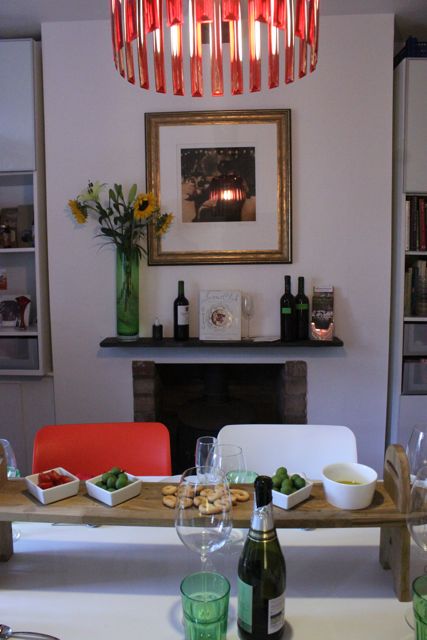 My book, pride of place on the mantlepiece. 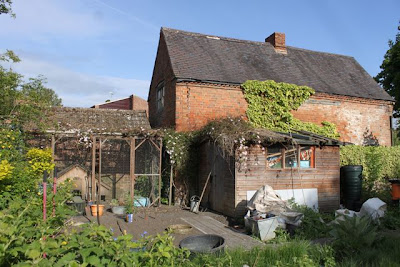 The house is so pretty but always rather chilly as they were made with one brick thickness of walls only, typical for working class Victorian houses. 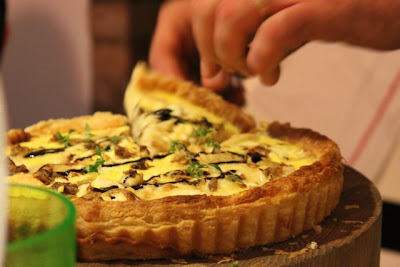 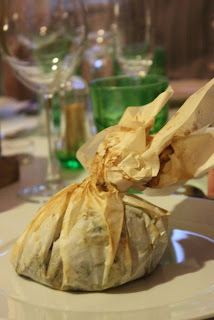 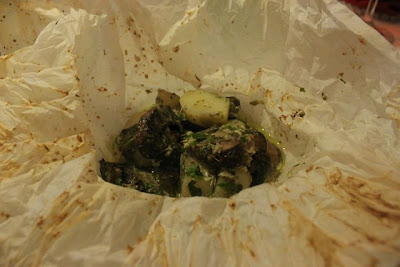 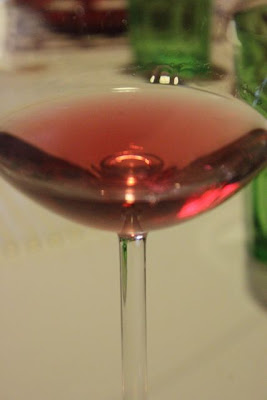 One guest brought along his home brewed hedgerow wines which were excellent. Here is the Dog Rose wine. I want him to sell at the next Underground Farmer’s Market. 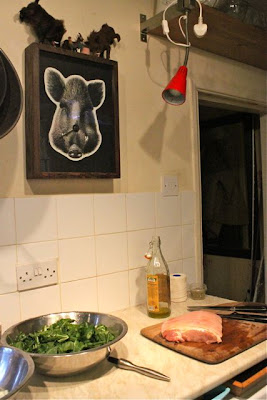 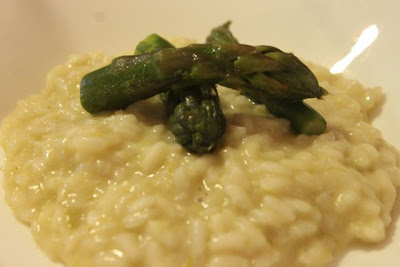 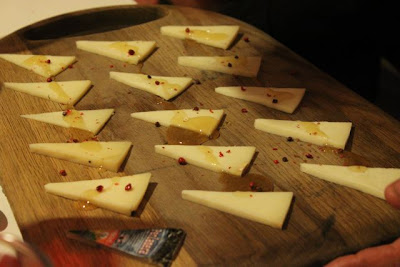 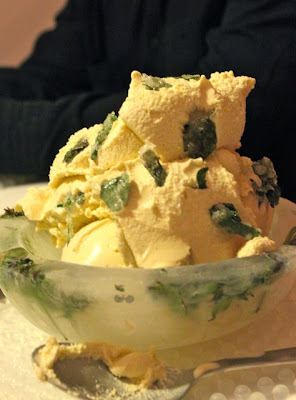 So nice to see my own recipes from the book being made! Sara’s home made gooseberry icecream (gorgeous) with crystallised herbs in an icebowl. Fantastic! 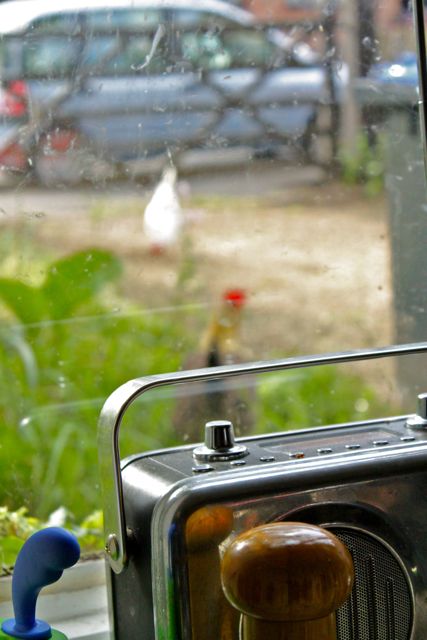 Radio 4 inside and chickens outside: bliss!
There was also a fantastic aubergine and pine nut pasta and roast pork with a large bowl of crackling, crispy rosemary roast potatoes and dishes of perfectly cooked chard.