How do you solve a problem like Israel?
Well, you can’t. Certainly a mere food blogger such as myself cannot. All I can do is enjoy and learn about their food, coming as it does from the Jewish diaspora and infused with influences from their Arab neighbours.
So I’m going to write about Israeli food – not the politics, which is a topic without end and probably without solution in my lifetime. Another thing I will talk about is that, on this trip, I got to meet some of the most important food bloggers in the world.
My week in Israel was as the guest of Kinetis, an organisation that seeks to promote Israeli culture beyond the conflict. They invited bloggers from key countries* and, at various times, groups who specialise in particular subjects: music, mummy bloggers and food bloggers.
Why bloggers rather than ‘proper’ journalists? Joanna Landau, the organiser of these trips explains: “Recent research shows that people are not influenced by celebrity endorsement. Rather they believe their friends’ recommendations.” She elaborated by saying that bloggers are more like friends, people follow their exploits, they are influencers in the way that ordinary journalists aren’t.
On this journey I met probably the most influential individual food blogger in the world, David Lebovitz, a tall man with a slyly caustic sense of humour. He was originally a pastry chef at the famed Alice Waters restaurant ‘Chez Panisse’ in the United States, until he upped and escaped to Paris where he has resided for nine years. He has an adoring public and gets hundreds of comments on each beautifully written and photographed blog post. Equally influential in her own country is heavily pregnant Estonian blogger Pille Petersoo, creator of the Nami-Nami food blog, who has become a TV and radio pundit expounding on her day job of sociology as well as food. Also on the trip were two ‘professional’ bloggers, paid to write by heavy hitter (both in terms of traffic and influence) group food sites such as Serious Eats (Erin Zimmer, who has a ridiculously infectious giggle) and The Kitchn, represented by Cambria Bold (fabulous font-like name).
Becoming a successful blogger, like anything, requires application and talent. But most of all, you have to keep going. So many blogs stutter and stop after three months. Lebowitz and Pille both started pre-blogger format, in 1999 and 2000 respectively. That’s over a decade of constant posting. Without pay. You only do this if you are committed, slightly obsessed and really have something to say.
Serious Eats and The Kitchn, the latter site being an off-shoot of Apartment Therapy, started around 2005. Each employs around a dozen bloggers who post several times a day.
Another reason for inviting bloggers as opposed to mainstream press is that Israel has a vibrant IT and new media sector, not far behind Silicon Valley. One part of the trip we met Israeli internet start-ups and listened to their pitches for new foodie apps. Said one “ipad style computers will match then replace desktop computer within two or three years’.
Apps, and therefore bloggers, are inexorably part of the future of publishing. 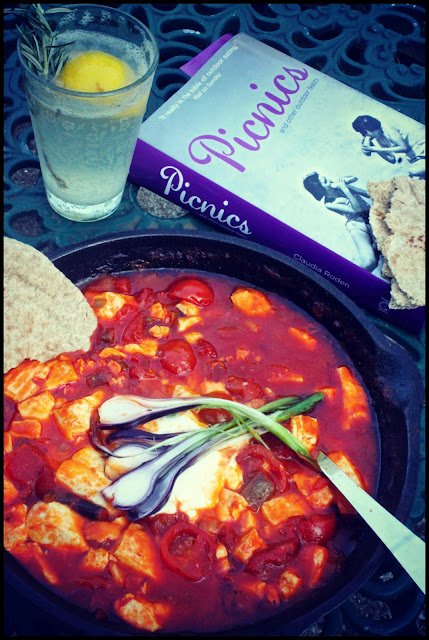 And so to the food. Yesterday, with sultry summer weather, leafing through the reissue of Claudia Roden’s evocative book ‘Picnics’, I felt in the mood for testing some of the dishes I ate in Israel, at home. Shakshouka is a classic Middle Eastern breakfast dish, eggs baked in a spicy tomato sauce. On my last day in Israel, I went to a cool vegetarian friendly hang-out cafe Orna and Ella  with my friend Professor Aeyal Gross, who had just been protesting against the White Night in Tel Aviv. Orna and Ella served a vegan version: tofu shakshouka. It was one of the best things I ate in Israel.
Yesterday I made it, not knowing the official recipe, but just like before, I scoffed the lot in one sitting. I’m a big fan of tofu, which tends to get a bad press for being bland but, paired with strong tastes, it’s an extraordinary flavour sponge. For this dish use silken tofu, a delightful textural contrast. For the last couple of weeks I’ve been getting purple spring onions in my Riverford Organics vegetable box, so I used those too, for the taste and the colour.

A good slug of olive oil
Half a dozen cherry tomatoes, split in half
1 red bell pepper, seeded, cut into thin strips
5 sprigs of purple spring onions, chopped into rounds
5 cloves of garlic, cut into slithers
A tin of chopped tomatoes
1 box of silken tofu, cut into squares (on your palm, or in the box)
1 tablespoon of sweet paprika
1 tablespoon of freshly ground coriander seeds
1 teaspoon of ground cumin
A few strands of saffron
1 teaspoon or more, to taste, of crushed chilli peppers
Salt to taste
A scoop of sour cream or yoghurt (optional)

Heat up the oil in a good quality cast iron skillet or a decent non-stick frying pan such as Green Pan. Then add the cherry tomatoes and the red pepper strips, fry until slightly golden. Add the spring onions. Ditto.
Then add everything else. Don’t stir. It’s cooked once all the tomatoes seem cooked through and the tofu has sort of poached into a silky wobbliness but still retain a cube-like shape.
Once it’s done, add some sour cream or yoghurt and maybe a few slices of the purple spring onions on top. Eat with warm pitta.
Really, this is a dish to convince non-veggies.

As I couldn’t find the fresh mint in the garden, because I was thinking, mmm fresh mint tea with sugar and pine nuts to cool me down, I accompanied this with a citron pressé, a cool tall drink, popular in French cafés.

Juice of half a lemon
1-2 tablespoons of caster sugar
Soda water
Ice cubes
Squeeze the lemon into a tall glass. Add the rest of the ingredients.

*Kinetis target bloggers from particular countries like France, Spain and the UK because they tend to have a negative view upon Israel. “The UK has always been pro-Arab”, said Joanna. 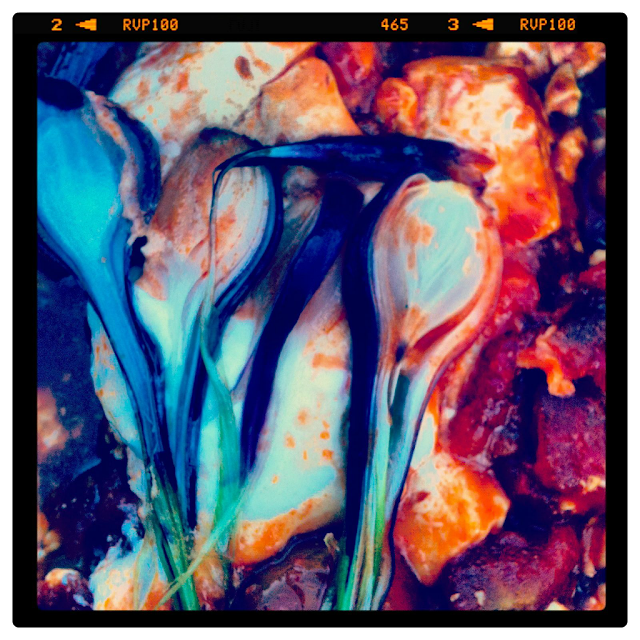