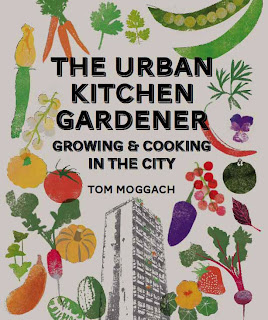 I’m so tired of the empty ghost-written celebrity/TV driven cookbooks which have no heart or soul. The love and thought is evident in The Urban Kitchen Gardener, for this is a book actually written and lived by the author, Tom Moggach. Suggestions such the ‘daily patrol’ of your plants, to tune into them, accompanied perhaps by a strong cup of tea, are born of experience and intuition. Tom’s book is vital for the city gardener and, at the same time, contains inspiring recipes for the green-fingered cook, so the Secret Garden Club, devoted to growing their own food, is a fan!

A few months ago, on a dusty but eye-opening trip through Georgia, the former Soviet republic, I met Tom Moggach. He was reporting for The Food Programme on Radio 4, exploring the markets in particular. I tailed behind him as he fearlessly bought mysterious seeds wrapped in wriggly writing newspaper cones from a market stall. I grew some of these seeds myself, unsure what would emerge from the soil a few weeks later.
I also led Tom astray from the path of legality when I found tiny purple Parma violet plants, sweet and sickly like confectionary, growing wild at a central Georgian vineyard. We used our water bottles to make mini protective greenhouses for these plants and smuggled them home in our pockets. My Parma violets* are doing very well in my London garden, despite the sodden British weather this summer.

I’ve always struggled with growing coriander, which is a shame because it is probably my favourite herb. Tom has useful tips, telling you to sow it every couple of weeks to retain a regular source of leaves for use in cooking, to only use seed less than two years old, to choose the brown unpolished seed to germinate. He also uses fresh green home-grown coriander seeds in his cooking which sounds deliciously intriguing.
The book is divided into vegetables, herbs, leaves (for salads), fruit, edible flowers; each section has enticing recipes such as chilli cornbread, fresh coriander and coconut chutney, home-cured mackerel (makes a change from the usual gravad lax), tomato and lemongrass rasam (a kind of South Indian soup).
Tom’s growing stuff that we’ve not tried: I’ve never eaten mouse melons, small and crunchy like cucumbers, nor have we grown shisho leaves, a Japanese ingredient with a distinctive flavour. Yet.
It is equally good as a cookbook, offering genuinely innovative recipes, as a gardening manual for small urban spaces. Tom Moggach teaches school children to garden, therefore his style is approachable as well as informative. This is a great book to inspire and instruct beginner gardeners.

*must make sure I split these after spring flowering, to propagate some more. I’m not sure of the exact cultivar.

Previous Post: « The United Plates of America: Global Feast
Next Post: Beyond the conflict: Israel, blogging and a recipe for tofu shakshouka »