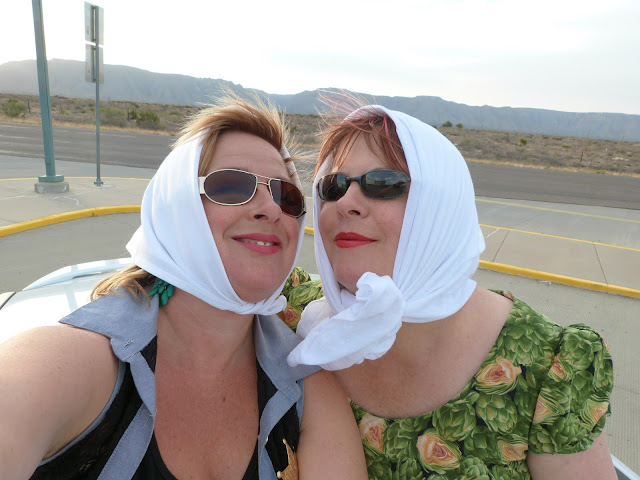 My sister and I recreating the Thelma and Louise selfie, in the nuclear testing desert of New Mexico, with the help of a restaurant serviette and a T shirt. 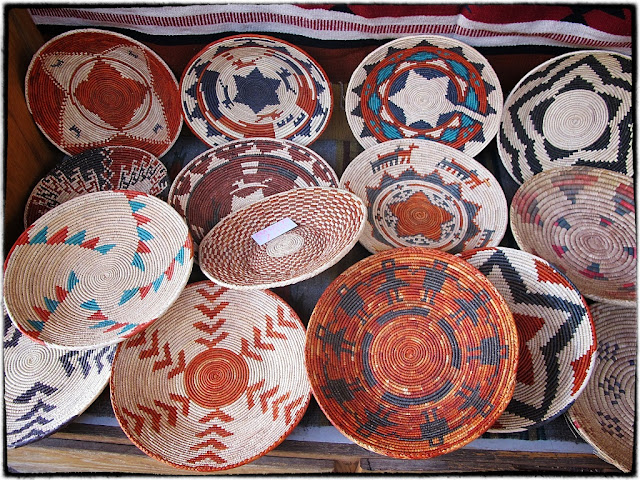 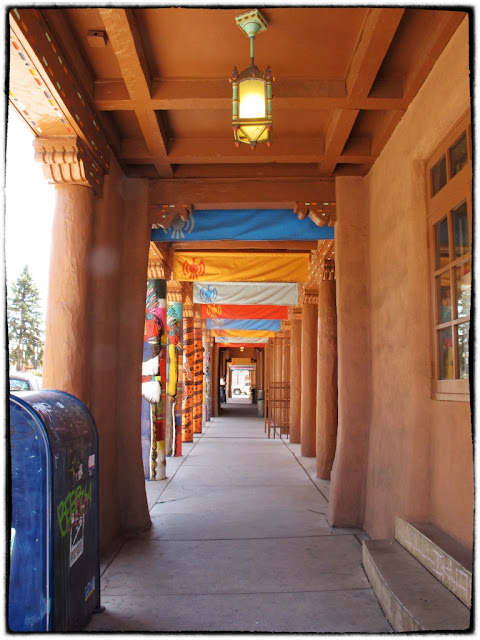 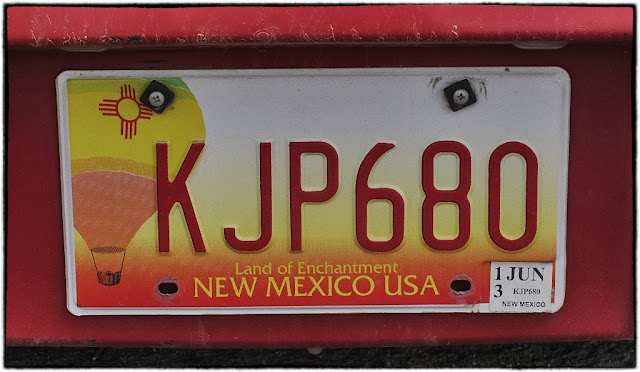 Flying into Albuquerque or Albuquirky as locals call it, my first night was spent at the ‘Extended Stay America’ motel, only 37 bucks a night, kitchen, wifi and wide screen TV included. At reception and in the lifts and corridors, I noticed that the place was full of men with ZZ top beards wearing their pyjamas. Everybody seemed to know each other. It dawned on me that they lived at the motel, for, at that price, it was cheaper than rent. 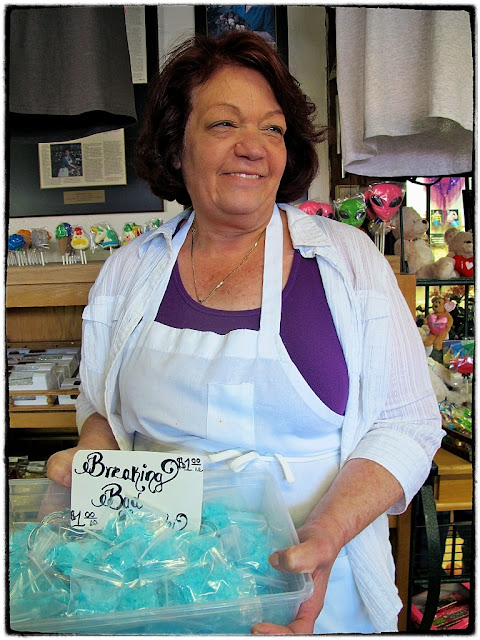 Breaking Bad was filmed in Albuquerque and while I didn’t do the tour,  I checked out The Candy Lady who makes the blue crystal meth for the show, amongst other incredible sweets. Crystal meth is a huge problem in New Mexico, not just on TV.
I took the ‘railrunner’ train to Santa Fe, but I wasn’t allowed to film or photograph out of the windows for we were passing through sacred Native American lands (didn’t look like much to my inexpert eyes, the odd hedge or hill). For all it’s folksy artisanal appeal, with fringing, moccasins, turquoise-studded jewellery and cowboy boots as obligatory day-wear, Santa Fe is one of the wealthiest towns in America. It’s also one of the oldest, not just historically but the population. The median age looks about 70 years old. The architecture is strictly controlled, using a low rise adobe style that blends in perfectly with the rolling brown landscape.
Artists have long sought out New Mexico; apart from Dennis Hopper and artist Georgia O’Keefe, Game of Thrones writer G R R Martin, who resides in Santa Fe, has bought the local cinema, next to the railway station.  I also met ‘Doc’ a local character, who hangs out in the town square, where, under the arches, local Native Americans sell their jewellery. 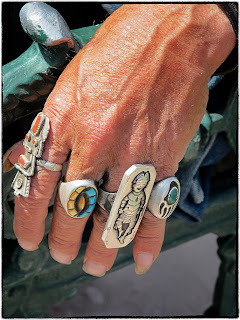 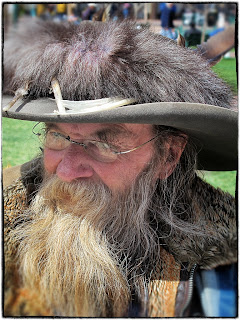 Sante Fe character ‘Doc’.
Later that day, I moved onto Taos. So within the space of 24 hours I went from sea level in London to just under 7000 feet in Taos. It’s difficult to describe how physically challenging this was. I couldn’t drink enough. I was waking up to try and hydrate myself several times each night, but you can’t drink water while you are asleep. My nose was crusty inside, my tongue parched, my skin shrivelled, my lips cracked. New Mexico is at four per cent humidity, a family friend, Linda McCormick, née Parker told me.*
What would London be? I asked.
About 85%.
Does that mean it would be raining? I puzzled.
No, that would be 100% humidity.

It takes about two weeks to become accustomed to high altitude. The bonus is you get a brief, approximately two days worth, energy boost when you return to sea level. This is why all long distance runners train at altitude: for that tiny advantage you get at competitive level, over your rivals. 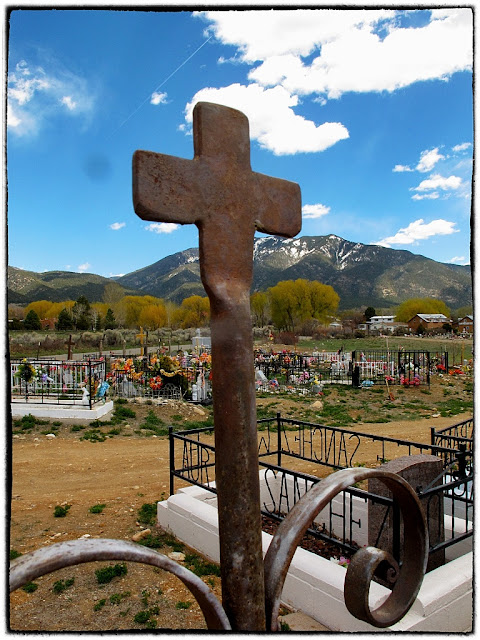 The food in New Mexico tends to be Mexican in style. This is not an affectation, for New Mexico was actually part of Mexico until fairly recently, 1912. As a result it has a large Hispanic population, who have lived there for centuries.
Much of New Mexican food is Mexican influenced but there are differences. New Mexican dishes are ‘smothered’ with sauce, red chile stew or green chile stew. The ingredients are slightly different: Anaheim chilli peppers rather than poblanos for instance. 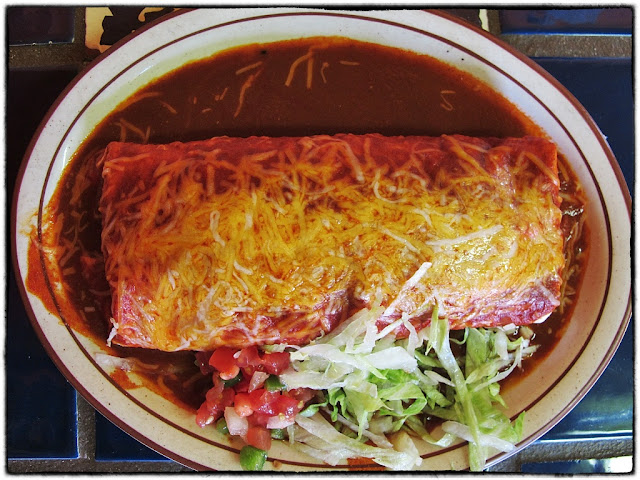 I also enjoyed the food at Harry’s Roadhouse in Santa Fe, which had great margaritas too.

Citrus salad with avocado and jicama, a kind of Mexican turnip

Even Italian/American foods such as this melanzane pizza, has green chile spread all over it.

I developed an obsession with Mexican oil cloth tablecloths which smelt wonderfully petrolly.

Breakfast was often a quesadilla with cheese 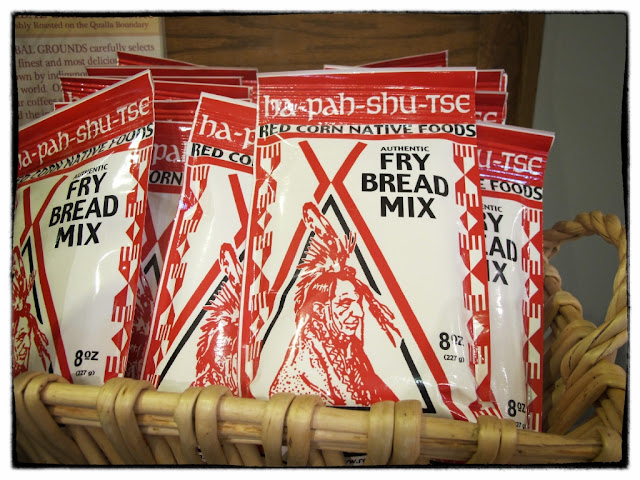 Most of what we think of as Mexican food in Europe is Tex-Mex which is heavier, with beans, meat, cumin and shredded cheddar style cheese. Chili con carne for instance is specifically a Tex-Mex dish being also part of ranch culture, cowboy cooking. Texas became an American state earlier, in 1845 after being part of New Spain (as Mexico was called before gaining independence from Spain) and an independent republic.
Mexican food in Mexico is lighter, (although depending on the region) with a larger variety of ingredients. 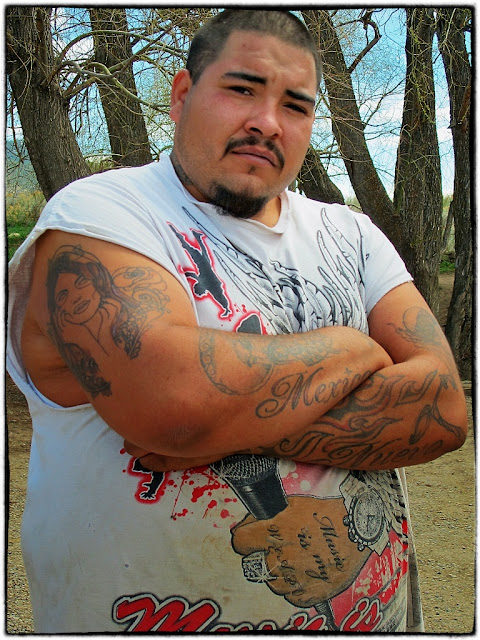 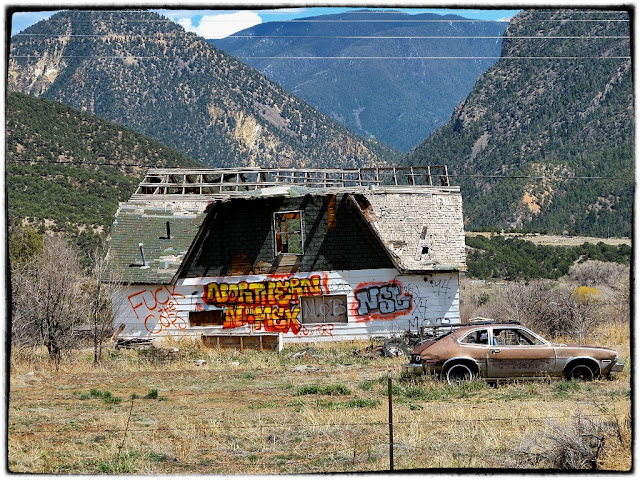 This house near Taos, with ‘Fuck the cops’ sprayed on it, was opposite the police station.
Later, my sister and I drove a sweet white convertible, Thelma and Louise style, across the state, down to El Paso. We stopped at Lincoln County, where Billy the Kid was in a war against the ranchers. It is now very peaceful, birds tweeting, with Western-style wooden houses and porches, a real shotgun town, backing onto red earth hills and wandering goats. You can still visit the courthouse from where Billy the Kid escaped. 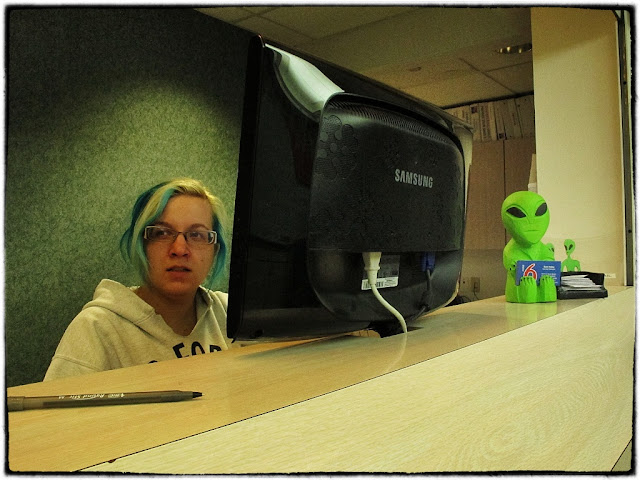 The receptionist for our hotel in Roswell.
Ranchers still run Roswell, site of the famous UFO crash in 1947. They are a conservative bunch, according to the green haired receptionist of the scuzzy motel where I stayed, and they loathe the tourist industry that has grown up around the UFO. Beware of other motels, she told me, most of them are inhabited by people on crystal meth. A local store opening up couldn’t find staff that had a clean tox test, for instance. 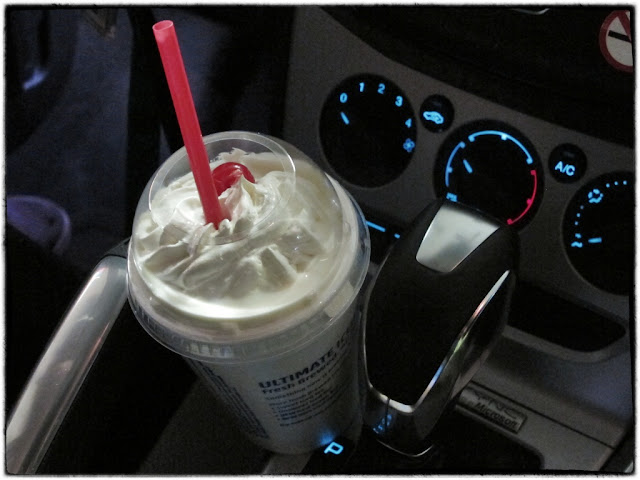 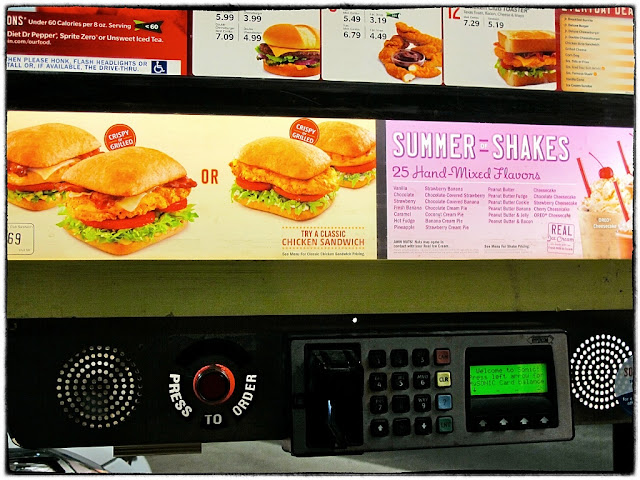 The Drive-in menu
I loved Roswell, it was America from the 1950s. Everything was drive-in. Without a car you couldn’t live there, blocks were a mile long. Breakfast at Dennys was surreal: a special ‘bacon’ menu booklet, elaborately courteous staff and enormous waddling customers spilling over the sides of their chairs. 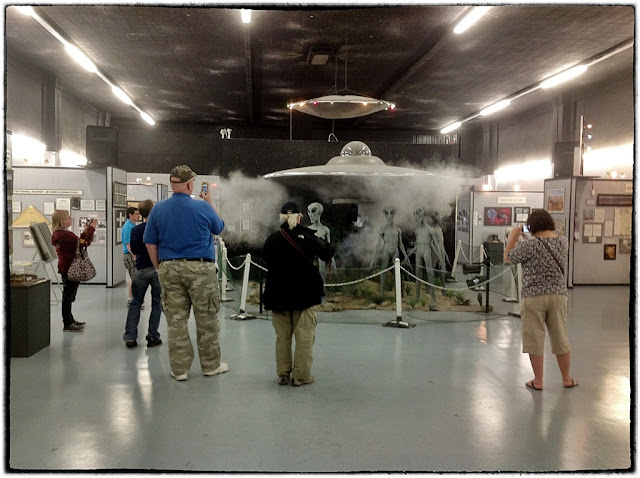 The UFO museum is a place where you can spend all day. The sworn testimonials from the locals are convincing as is the witness statement of a local funeral director who spoke to the nurse that did the autopsy on the surviving ‘alien’. One book I was reading, The Day after Roswell, claims that the extra-terrestrials were inspecting the nearby atomic weapon testings site, which is a possibility, as the testing was going on throughout the second world war. The author also claims that the speed of scientific progress since the crash have been made possible from scientific examination of the materials recovered: incredibly light-weight metals and lasers for instance, which led to drones and microwaves amongst other new technologies. 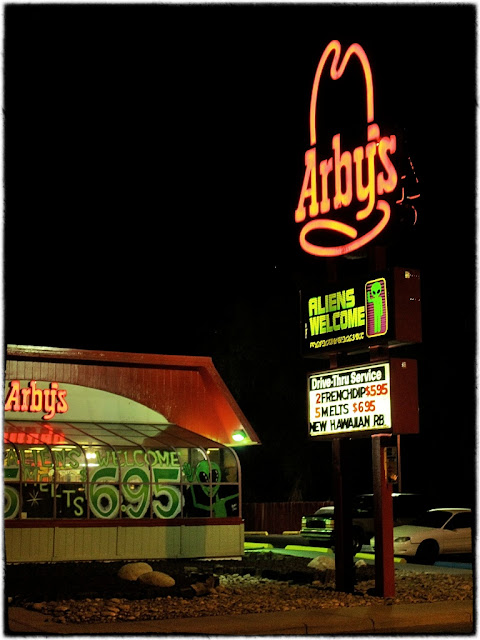 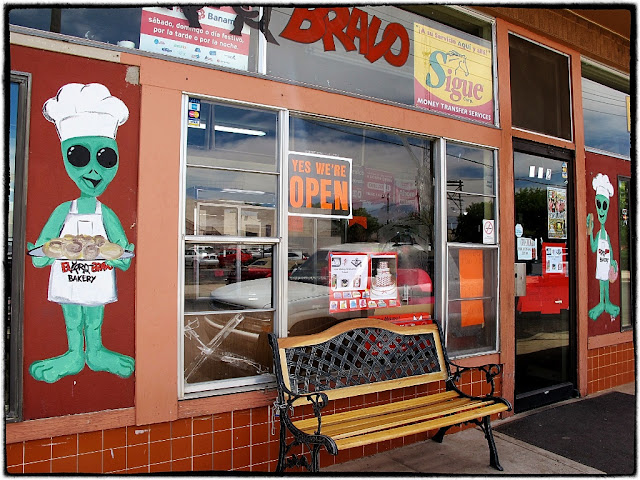 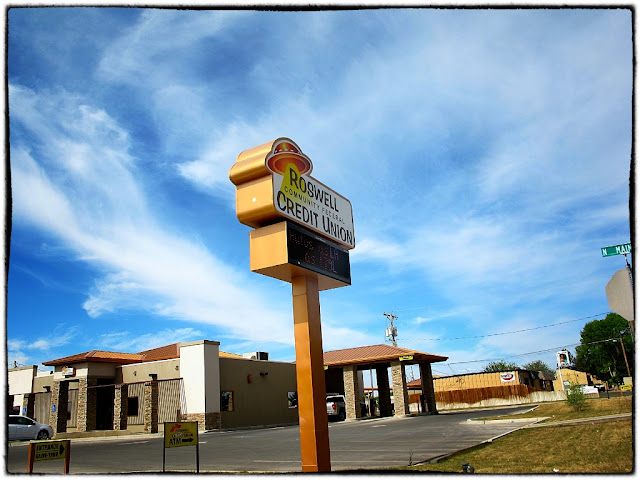 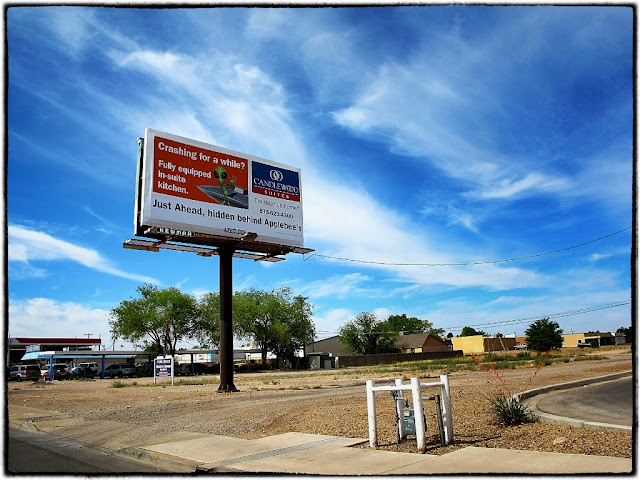 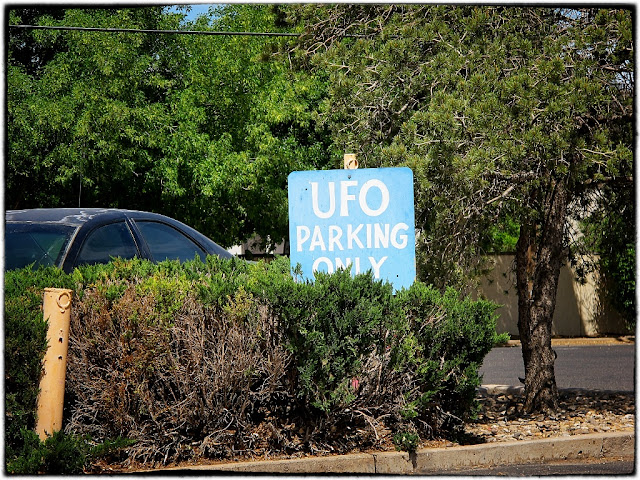 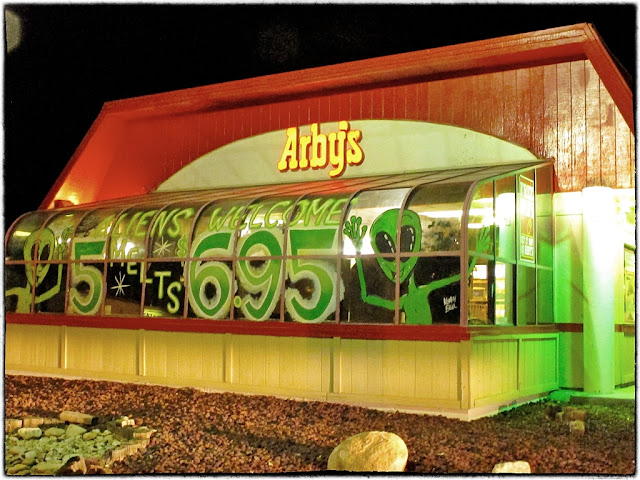 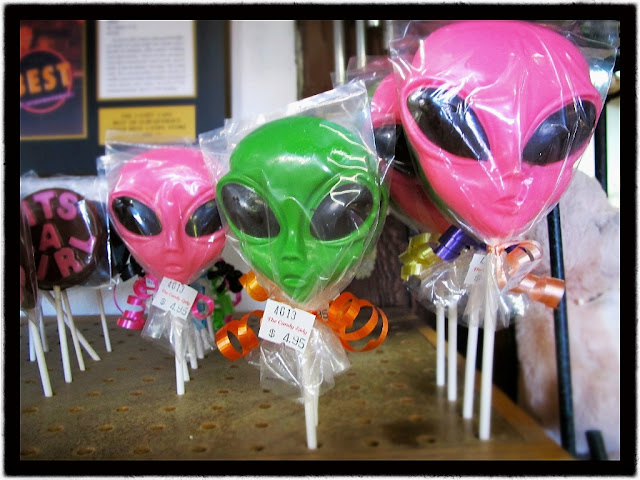 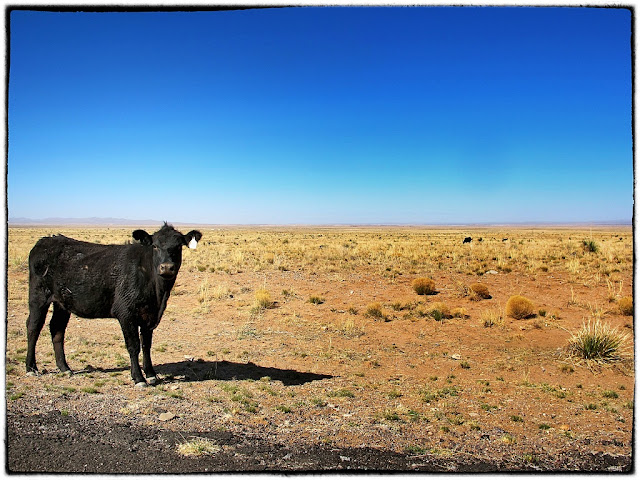 Cow in the nuclear desert.
The real star of my Westerns is the land. A Western is all about the land.
Film director John Ford.
Driving onto the border with Mexico, this part of the United States of America has a terrifying landscape, with a bleak, desiccated, burnt umber beauty. I tried to imagine colonising it as European white settlers did. There is nothing to compare to this in Europe. The vastness, the lack of water or shade, you need balls to even attempt travelling across it, let alone stumbling across in a cumbersome wagon, with wife and kids. There was no road. Maybe there were some trails. The pioneer families such as the Parkers (note below) must have been tough. Only the horse tribe, the Comanches, willing to slit open their horse and drink the water in the stomach, thrived. (There were no horses in America until the Spanish brought them over)
The white settlers were regularly butchered, raped, scalped and mutilated if they dared to settle. You’d have to be crazy or desperate.
Today we think of Americans as fat, rich, powerful, self-indulgent and stupid about their guns. But huge sacrifices were made by the pioneering Westward wagons on their way to conquer Texas and New Mexico. Of course, in the end, the Native American Indians, and millions of buffalo, hunted to virtual extinction, paid the highest price, but for a long time, they resisted the encroachment. The whites had to learn from them, how to survive, in that bleak and beautiful landscape.
Cowboy culture and its food, still exists. I picked up a local paper, with a column on ‘Why I love my gun’ and news regular community Dutch oven cook-offs. A Dutch oven is a large cast iron (or less usually, aluminium) pot with a lid and handle, from the sounds of it, a bit like a mini mobile Aga. With judicious seasoning, placing of coals underneath and on top of the lid, you can use it as an oven on a camp fire. You can also bake good bread in a Dutch oven. The ‘chuck wagon’, a dedicated food wagon with fold out kitchen, carried dried goods (beans, cornmeal, flour), pickled eggs, buffalo and beef jerky and enamel plates and mugs, and the heavy Dutch oven. Here is a superb site which explains how to cook with a Dutch oven. 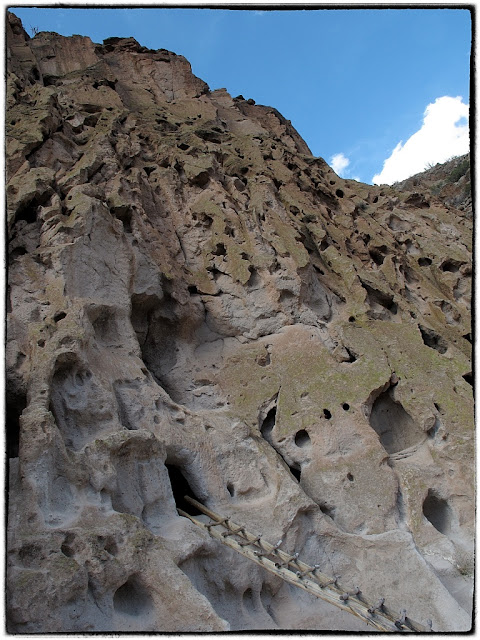 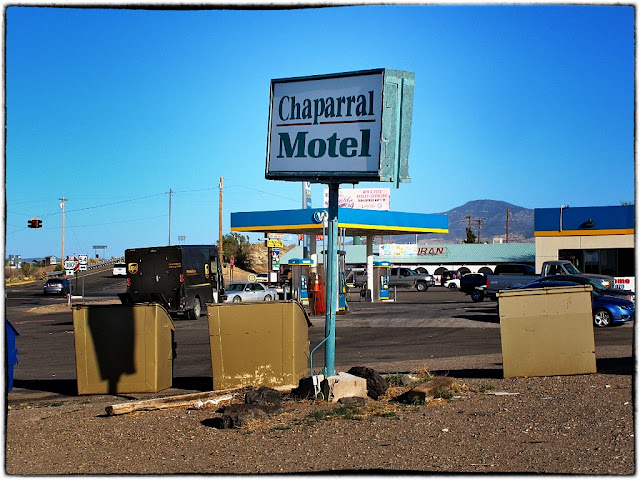 *I mention her maiden name Parker because this is one of the most famous names and events in the settling of the American West. Linda’s forebear Cynthia Ann Parker was abducted by Comanches from her families’ ranch at the age of nine, while most of the rest of her family were killed. For years rescuers sought her out but she married a Comanche, had children and refused to return to white society. Comanches often kidnapped young girls rather than kill them because, as a hard-living nomadic horse tribe, the fertility rate of their women was lamentably low (according to this book). Her son Qanah Parker became one of the fiercest warriors during the Indian wars, leading the Comanche. Eventually, he realised that defeat was inevitable so he brought the Comanches to the reservation where he liaised between white and native American society. Linda McCormick, on the other hand, is married to Michael McCormick who is a world renowned Punch and Judy man, who my parents met when they lived in London, working for Jim Henson of the Muppets. Their son Sean is working on vampire and horror films in Santa Fe. As I say, New Mexico is full of characters.