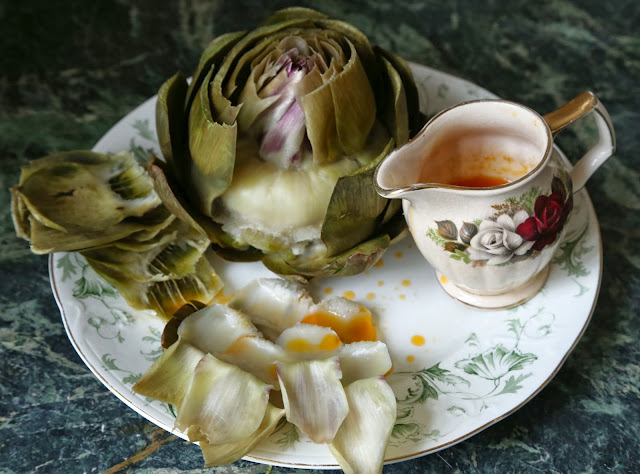 The recipe is simple but the ingredient is complicated. Artichokes, a large edible thistle, take time to eat.  You eat them with your fingers, tugging out the leaves and dipping the tip into an emulsified sauce such as mustard vinaigrette, mayonnaise or this sunset-hued sauce in my recipe below, clawing off the pale green flesh with your teeth.
They were a Tudor food, Henry VIII grew them at New Hall palace in Essex and Queen Elizabeth the I’s chef cooked many artichoke dishes. I once lived as a Tudor for a few weeks at Kentwell Hall in Suffolk. You had to dress Tudor (I made my own boned bodiced dress), talk Tudor (no saying ‘okay’) and show deference to the upper classes (really hard all that curtseying). I worked in the dairy and in the blacksmiths. Tudor food for the poor is mostly worts: turnips and roots made into pottage. The upper classes had meat, fish, salads, often with flowers, fresh cottage cheese and marzipan.
Artichokes are one of the oldest cultivated foods, there is something pre-historic about their unapologetic inaccessibility. Italians use raw artichoke in salads, sliced thinly. But you need very fresh, young tender plants, they soon grow coarse and stringy.
We grew some artichokes in the Secret Garden this year: from four plants we got a paltry two artichokes. They take up space but have a spiky beauty. 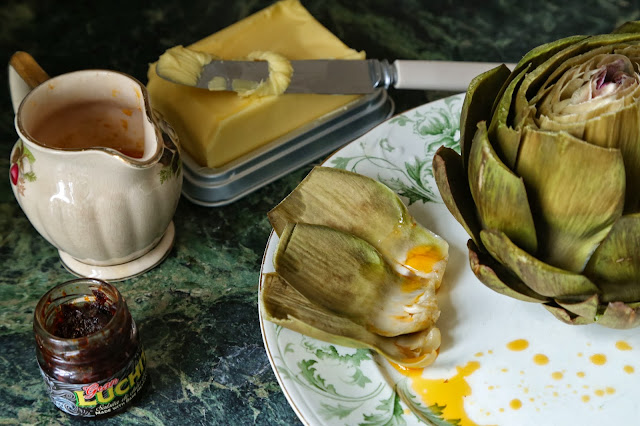 Recipe for Steamed artichoke with chipotle, butter and lime dip
For one person to eat slowly.

1 fresh artichoke (from AndreasVeg)
Half a lemon
Salted boiling water to cover the artichoke head.

Cut off the spikey tips with scissors or a sharp serrated knife. Plunge the artichoke into a deep pan of salted boiling water. Add half a lemon so it doesn’t discolour. The artichoke is ready when you can easily remove one of the outer leaves. Usually this takes about 20 minutes.
Make the sauce by mixing melted butter, adding chipotle sauce, lime juice and salt.
To eat:
Dip the outer leaves into the sauce, eating the small amount of artichoke flesh at the end of each leaf. Once the leaves become small and flimsy, discard them and pull off the thistly top. Then cut up the artichoke bottom, dipping it into the sauce as you go. 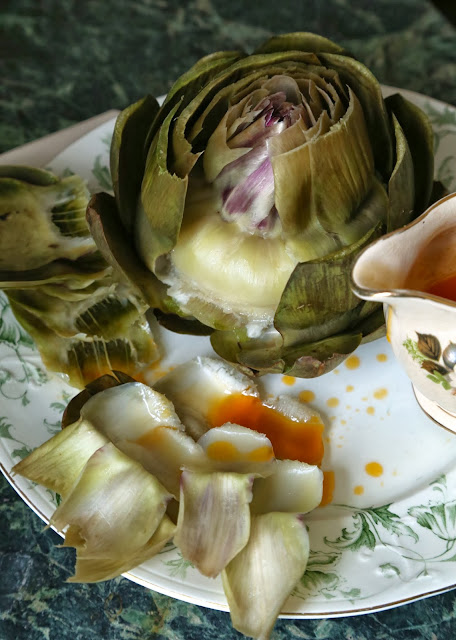