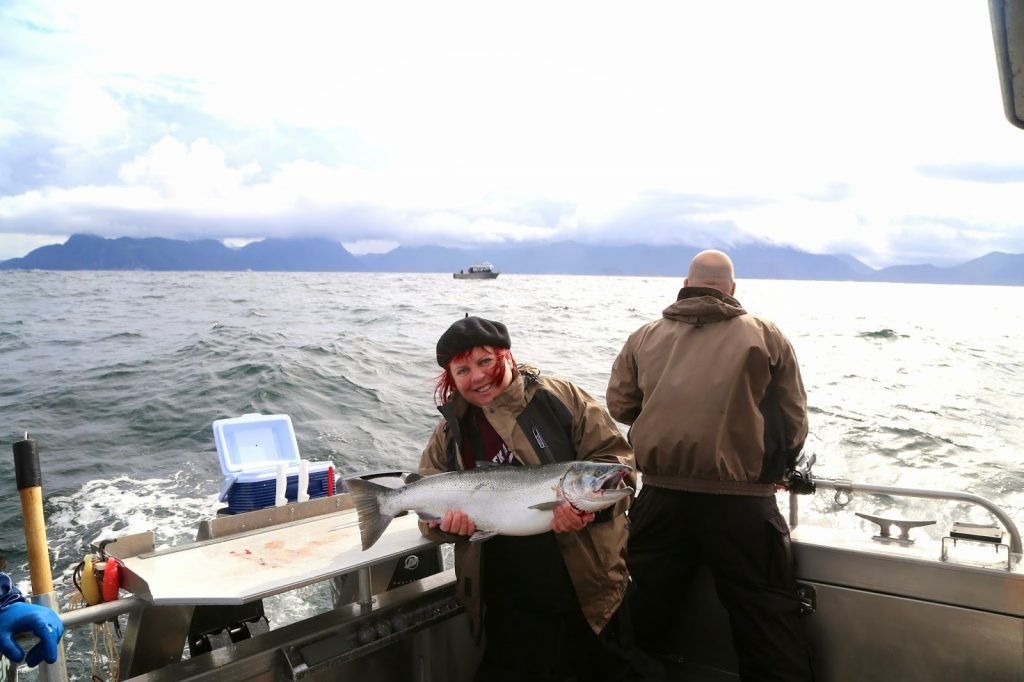 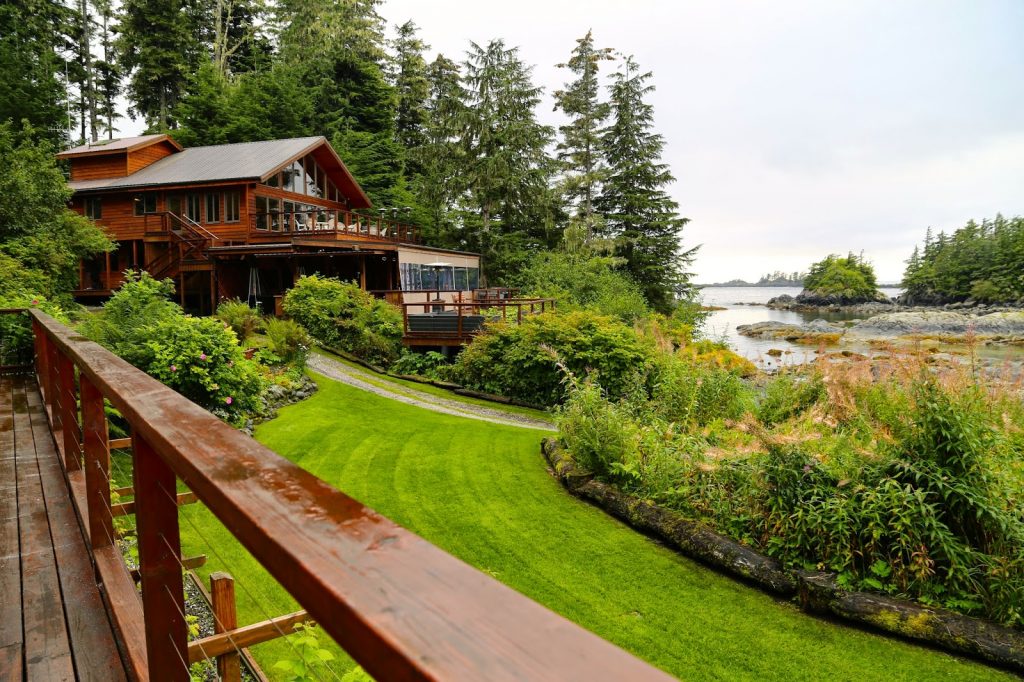 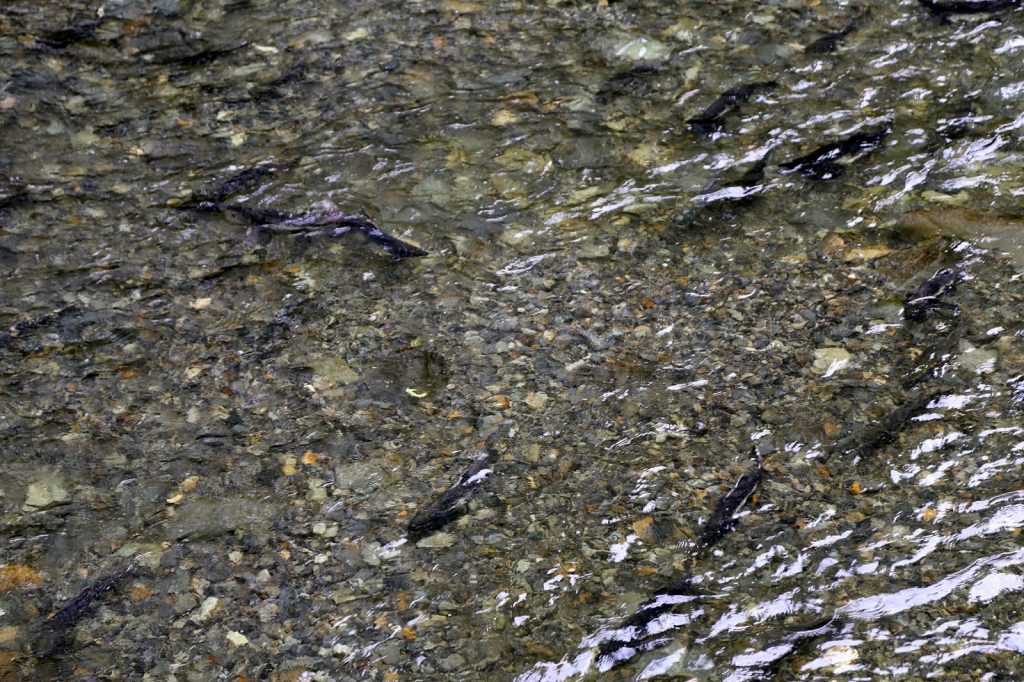 How salmon have sex and make babies: The salmon return to the rivers, the females lay their eggs by making an indent in the river bed with their tails, then the males swim over it and deposit their ‘silt’/sperm. (See Eddie Izzard’s skit on how God decided salmon should mate.)
I’ve been fishing a couple of times in my life but I’ve never actually caught a fish. So I was intrigued to go on a culinary fishing retreat at Talon Lodge in Sitka, Alaska, invited by the Alaska Seafood Marketing Institute (ASMI). People like to fish, and nowhere more so than in Sitka, where spawning salmon in the rivers are so numerous, you can practically scoop them up with your hands.
After a good night’s sleep in a spartan pine bedroom with thrilling panoramics of the sea, I struggled into my fishing outfit provided by the lodge; fisherman’s dungarees, Wellington boots and a weatherproof jacket.
Breakfast was at 6 am. Coffee, ‘oatmeal’, yoghurt and fruit ‘parfait’ and a hot option, such as pancakes or omelette. The first morning I chose oatmeal. I discovered that Americans don’t even know the word porridge. Their version is fairly dry and lumpy, not the soft soaked oats cooked slowly that we have in the UK. @Porridgelady needs to go over and do some workshops.
Be at the dock by 7am. By 7.30 am, we were on the boat; a packed lunch provided by the lodge, and a two person crew, the captain and his assistant. The captain looked like Matt Damon, the assistant was from Mexico. Both had come up to Alaska to work the summer season; like many emigrées from the lower 48 and beyond, they work their butts off for three months then return to wherever they come from, often to work second jobs. In the case of the captain, he’d return to Brazil and his Brazilian girlfriend.
We were asked several times whether we suffered from sea sickness, those who did, took a pill the night before and one on the day. I said no, as I’d never suffered from it before. 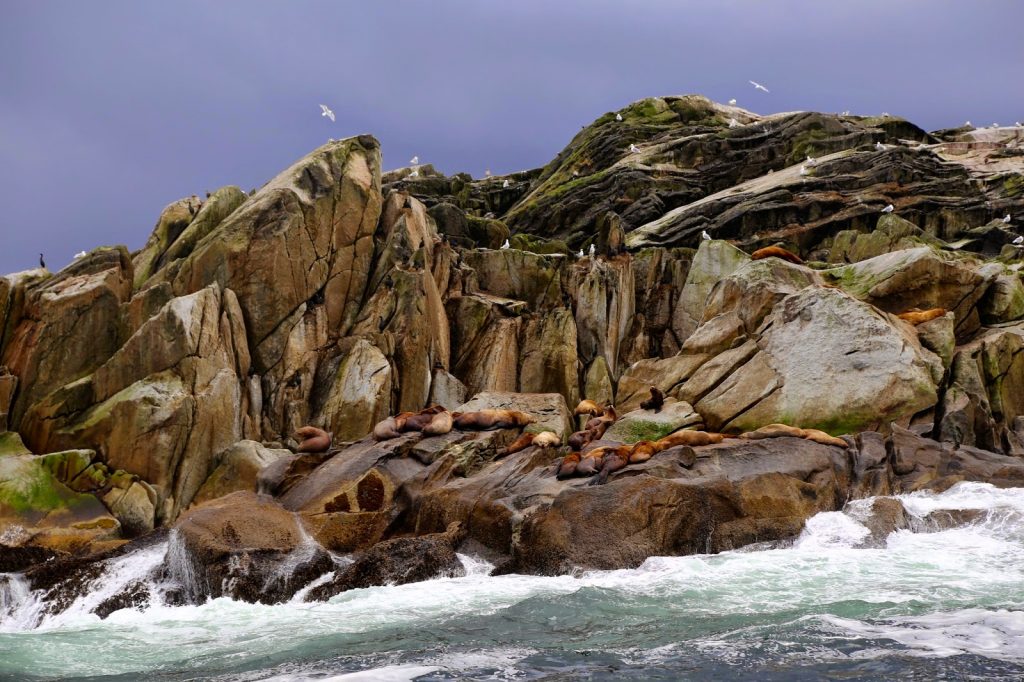 As we sped out towards the ocean, passing a blowing whale, bobbing puffins on the water and Caramac brown sea lions on rocks, it was explained that the type of fish you get depends on the depth of your line and the time of year. There are five types of Pacific salmon, which you can remember via a cerebellum memory game you do on the five fingers of your hand:

Left to right: King, Silver, Sockeye, Chum, Pink
To catch a fish, you drop your line to a certain depth, as fish swim on ‘shelves’ within the ocean. For instance: 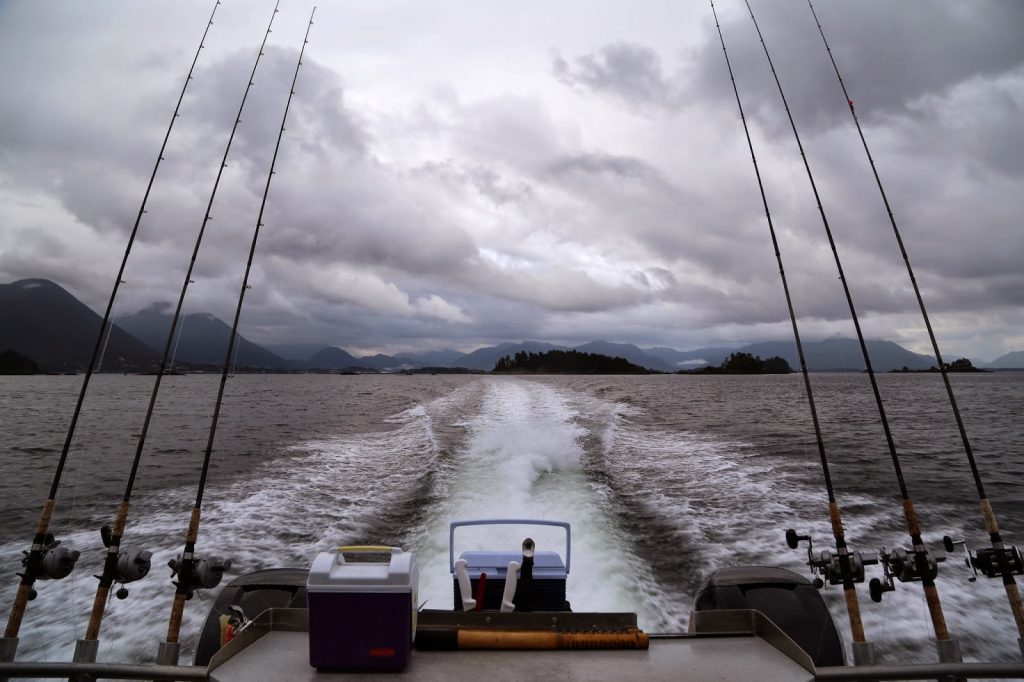 What we are doing is ‘sports’ fishing as opposed to commercial fishing. We use rods, rather than nets; with rod holders attached to the side of the boat. The captain at the wheel has a monitor, a screen that shows where the fish are, which also makes things easier.

At each stage we were asked, “Are you comfortable?”, “Do you want to go further out to sea?”.
“Yeah, of course”, I breezily replied. I had a passing queasiness but nothing serious.

Once out in the ocean, Matt Damon set me up with some bait, a small sprat, and showed me how to cast and reel in the line. I cast the line, essentially trying to throw a thin bit of string as far away as possible in the water. I managed about a metre away from the boat. Despite my clumsiness, something seemed to occur immediately, the end of the rod bowed. I reeled in, felt the tension, reeled a bit more and kept going, my arm aching with the weight of the fish. Eventually I lifted my rod, directing the end towards the side of the boat. The Mexican ‘Primo’ grabbed a hook attached to a short wooden stick, hooked the half metre sockeye salmon and slung it on the deck. Fishing for 30 seconds and I’d caught something! 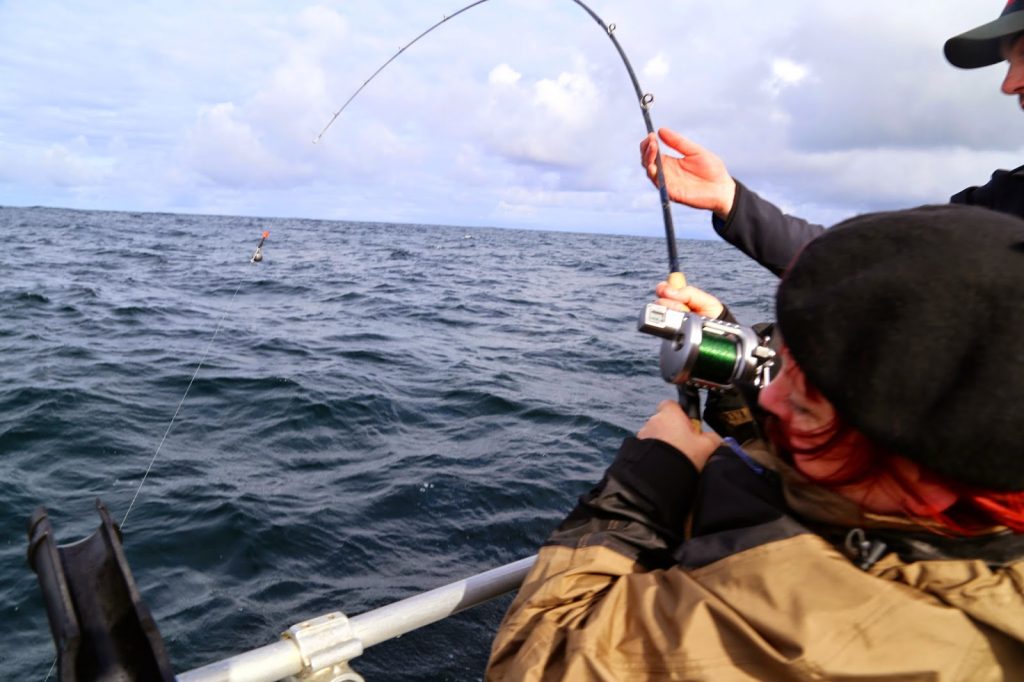 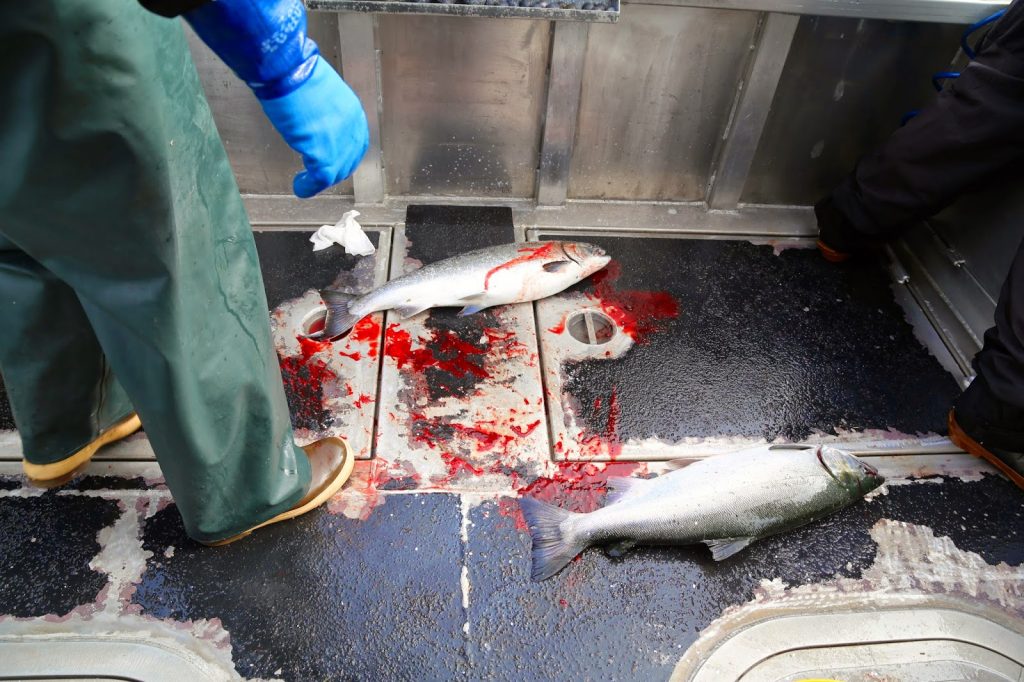 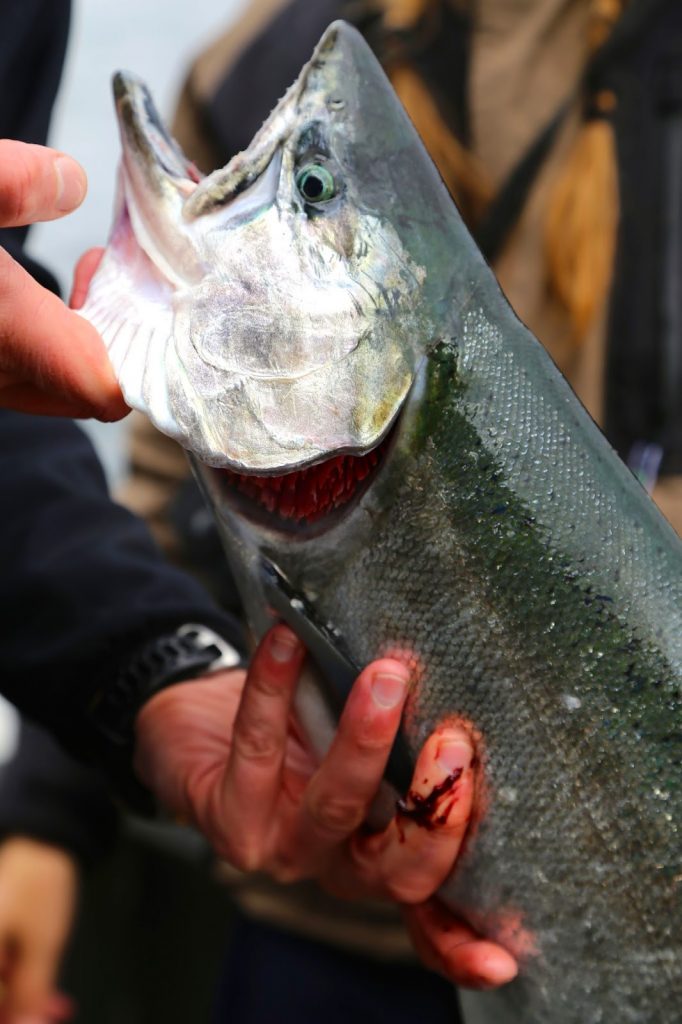 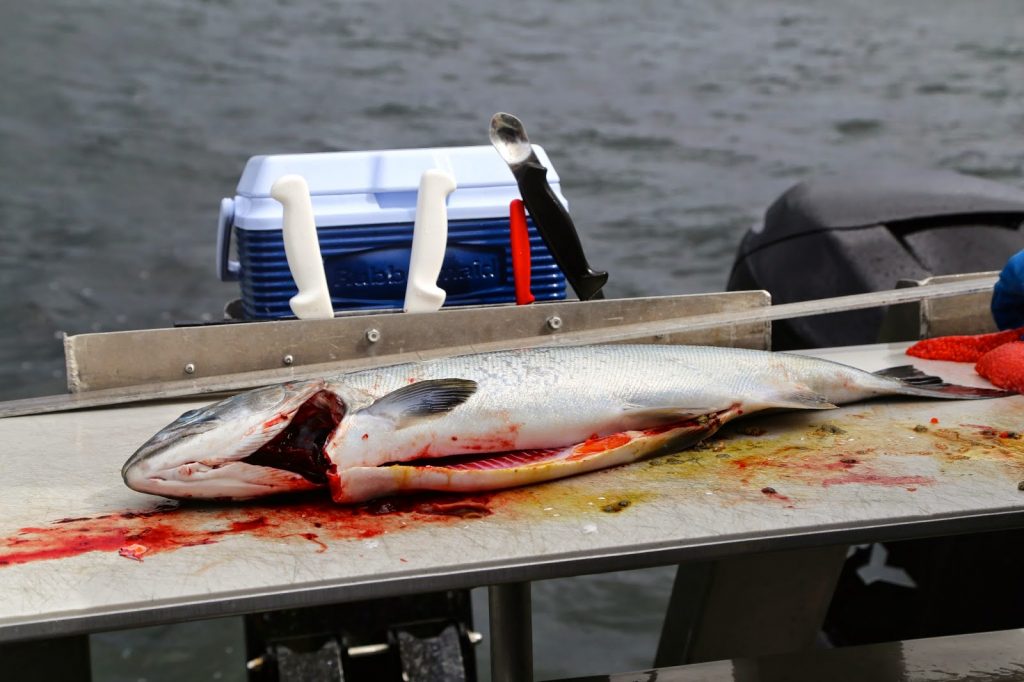 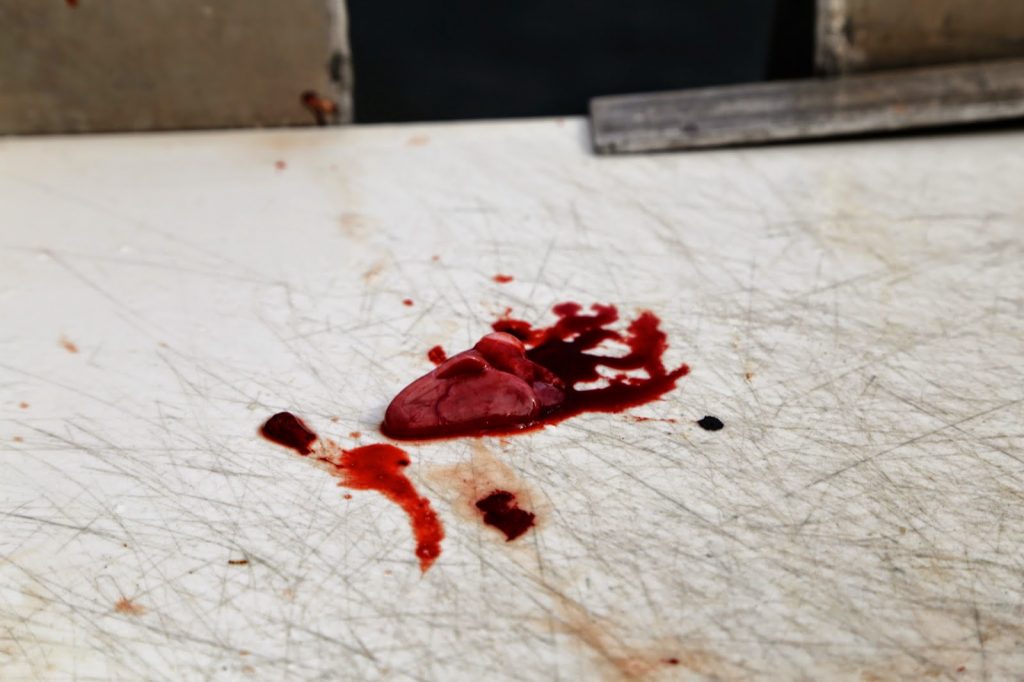 A salmon’s heart
But I wasn’t celebrating. Although the water looked fairly flat, I had started to feel seasick. I made my way to the back of the boat, where my salmon was being gutted on a small table. The guts were thrown into the sea, any roe was kept in a ziplock bag. The heart of the fish was left still pumping on the table. That heart pumped for a good ten minutes. I suppose this was my A. A. Gill moment, where I kill something just to know what it feels like.

“Have some potato chips, the salt will help you”, said Primo. “And how about some ginger ale?”

I sat there, munching and sipping, trying to control my stomach. After some recuperation, I got up and made another attempt. I continued to cast and reel but nothing else bit that morning.
The boat drove to another location. We were all sitting inside chatting to the crew when someone said “Where’s Neil?”, one of the other journalists. We swivelled, looking out the windows around the perimeter of the boat. Nowhere! He was gone. Kate, the PR for the trip, who was by now swigging a beer, looked stricken. Then someone had a thought – maybe he’s in the toilet? Neil’s large body shortly emerged from the tiny ‘head’. The relief made us hysterical with laughter. 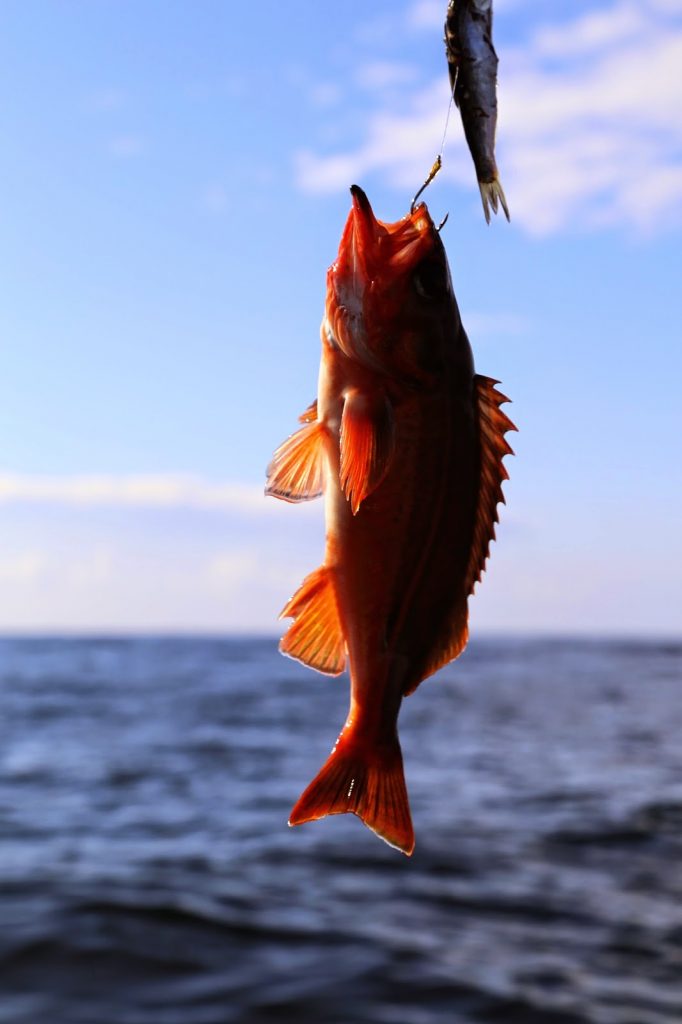 That afternoon I caught a quilled rockfish, “eyeballs, huge-bulged like squids” with the shock of a quick ascent, bladder distending from its mouth, a fishy version of the bends. There is some skill involved in reeling it in, feeling the pull of the fish, letting it run a little, tiring it out, then winding it up until the weight hits the end of the rod. You see your catch flapping frantically, gasping as you lift your rod to the side.
With really big fish, a 200-pound halibut for instance, someone has to shoot it in the head before bringing it on board – those things can break your leg. 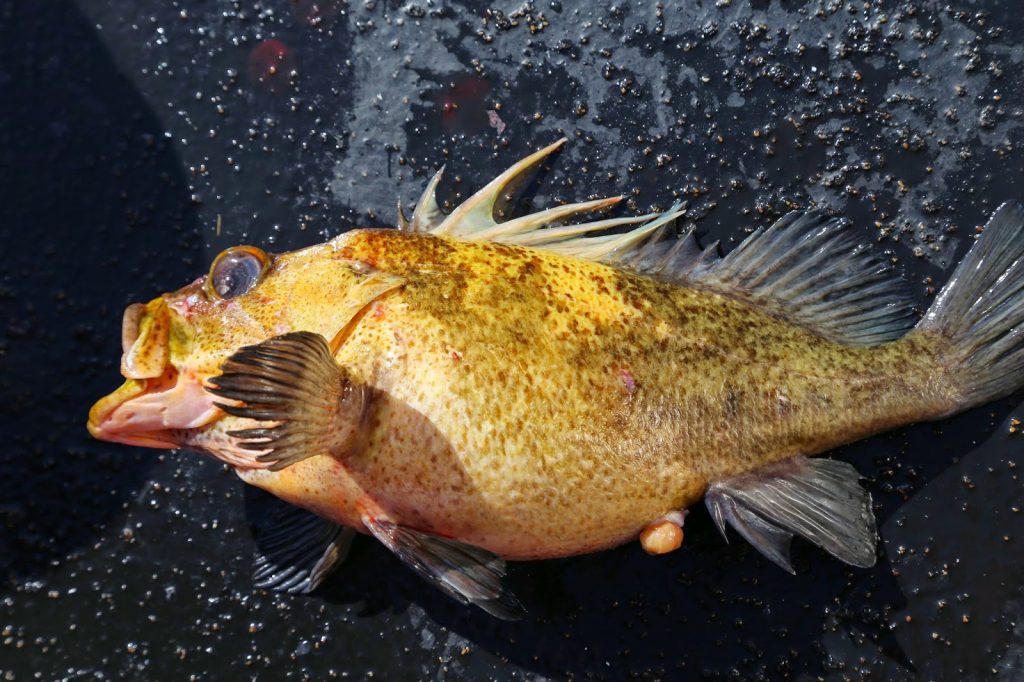 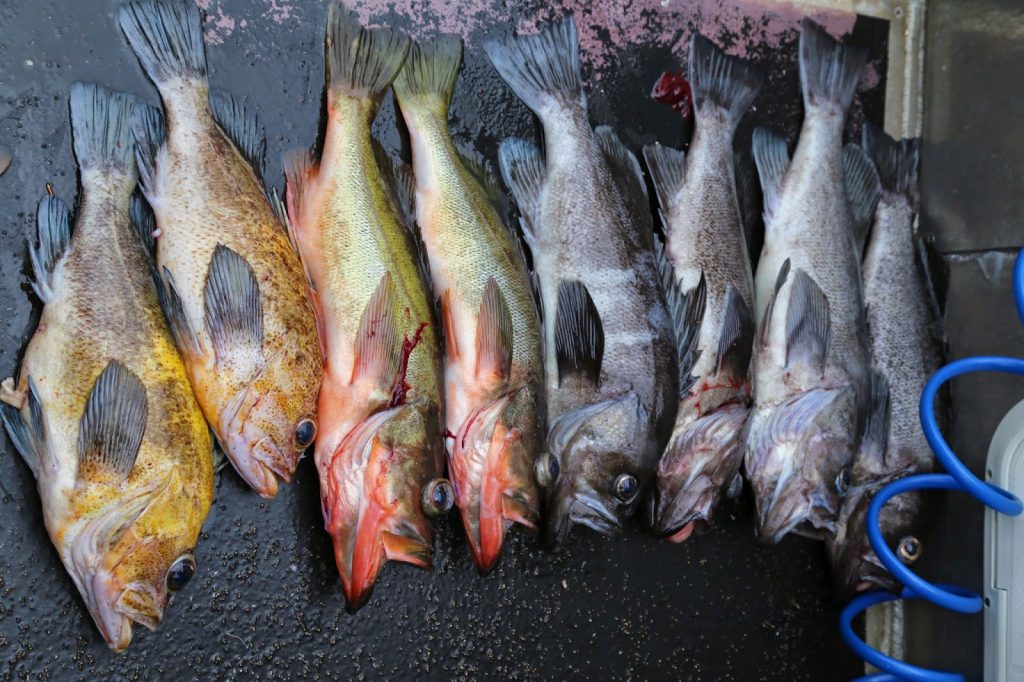 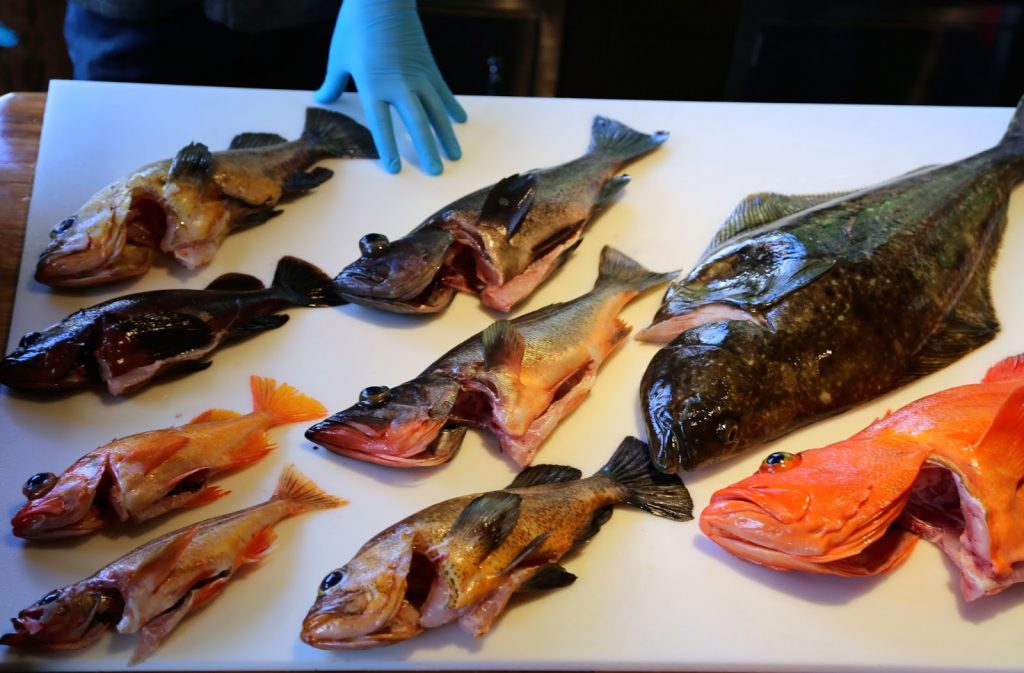 Different kinds of rockfish
To catch a fish, you must recognise its behaviour:
How to recognise the types of salmon: 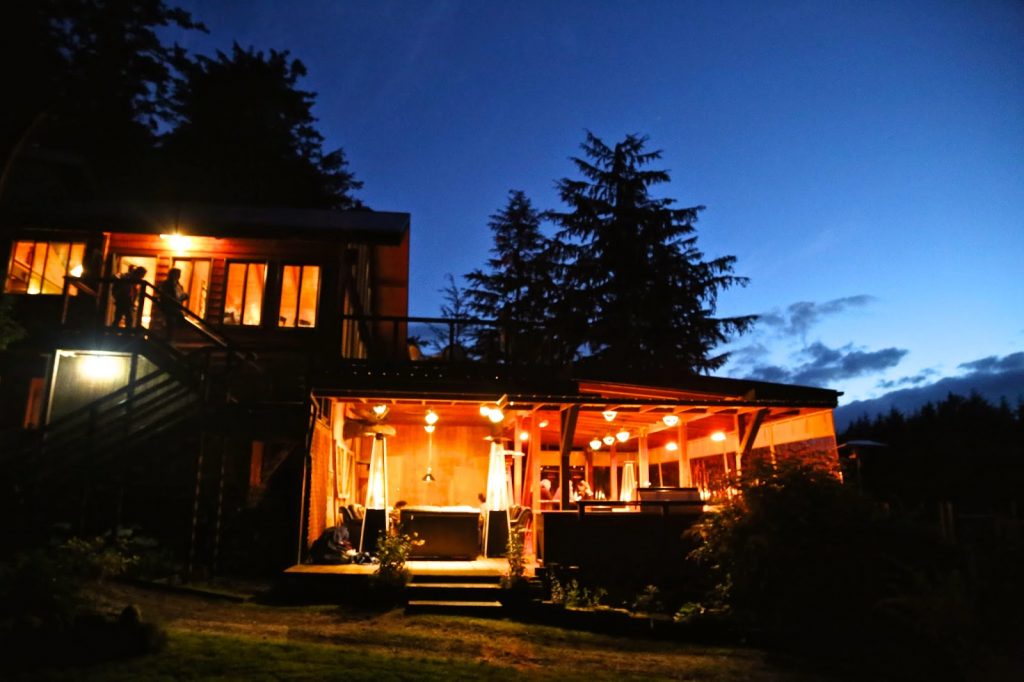 That evening, the fires in the lodge were lit and we gathered around an outdoor kitchen where Japanese and American chefs displayed their skills. The Japanese have 500 words for cutting. We watched as they nicked, slit, lacerated, snipped, trimmed, dissected, fissured, carved and gashed whole fish into neat little sections for rockfish sashimi (in truth a little chewy for my taste) or salmon carpaccio and rubbed, softened and steamed fish skin for soup. Veteran American chef John Ash played master of ceremonies, describing the process, while cooking simple superb dishes such as ‘hobo pack’ salmon and fish soup. The Japanese chefs tend to cut around their fish, working around the shape, using the bevel of the ‘Deba’ knife (below). The American chefs use larger knives and bigger strokes.

The difference between Atlantic and Pacific fishing:

The biggest criticism of Atlantic salmon fishing is that most of it is farmed. Farmed fish have usually consumed their own weight in antibiotics. Even with descriptions such as ‘craft-raised’ or ‘farmed in the wild’, this salmon is still fed on pellets. Pacific cod is not a sustainability nightmare, unlike Atlantic cod. Alaskan fish equals a sustainable choice. I asked the ASMI representative what he thought of the British/EU fishing situation. He was straining to be diplomatic but flushed as he said that our low fish stocks were the result of an ‘abysmal’ fishing policy in which too little was done, too late. Up until the 1970s, Alaska had Russians, Japanese and others fishing only 3 miles offshore. After that, they got strict and ten thousand nets had to be removed from around the shores of Alaska.

Fish conservation is in the Alaskan constitution of 1959 (Article 8 section 4). As a state, they are unique in having control and monitoring fish stocks and have pioneered fish management, influencing other states. Fishing is a tradition, a way of life, both for Native Alaskans and Modern Alaskans. Everybody in Alaska is touched by fish and the fishing industry.
If biomass means all the fish in the sea, there is an acceptable biological catch (ABC) and total allowable catch (TAC). Alaska allows fisherman to fish at TAC level.
In Britain we have control of 200 miles around our coast but this is open to every member of the EU. This was the price of joining the European Community. 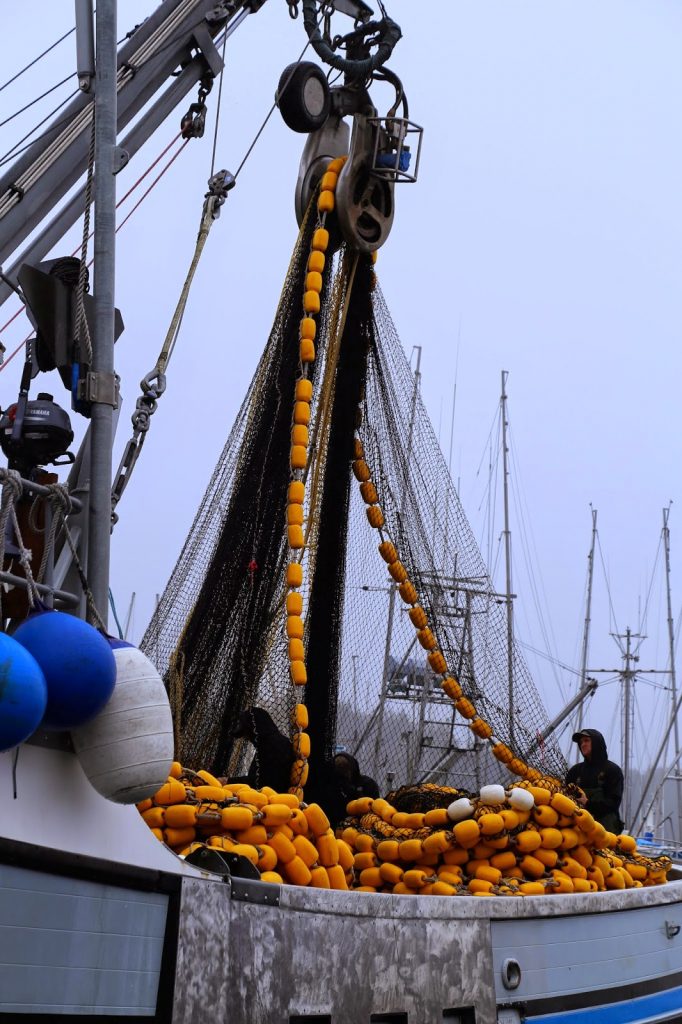 In Alaska, there are three types of fishing: seining, gill nets and trolling. The most artisanal way is ‘trolling’, not to be confused with ‘trawling’. We met a fisherman who uses this technique; it’s a bit like bulk rod fishing, several lines are dragged behind the boat with hooks placed every so often along the line. With this bespoke technique they catch fewer fish, only 60 to 80 salmon a day. The crew, the captain and two workers, when they catch the fish, hit it on the head then cut the gill plate. This is to slow down the lactic acid and prevent the salmon from becoming damaged while it struggles. (In general ASMI are encouraging fishermen to handle their catch carefully, not to bash around the bodies. I saw this also during my visit to Billingsgate where the veteran fishmonger Bill Condon takes care not to move the body of the salmon around too much when slicing). A medical catheter is dropped into the kidney to drain the blood; this can be done in 45 seconds. The crew splay the tail of the fish and place it into the super freezer on the boat, where the salmon is frozen at a temperature of -1ºC/30ºF. The fish doesn’t even go through rigor mortis, in fact it can go through rigor a year later when it thaws. It takes four to twelve hours to freeze the salmon and every so often they dip the fish and glaze it with water to prevent dehydration. Open water fish don’t get any fresher than this.

How long can you keep fresh fish?

After 5 or 6 days a salmon breaks down. At 12 days, it’s mush. I remember going into Tesco at Christmas where they had whole salmon going at a cheap rate. The salmon weren’t even in the fridge, they were on the floor stacked in boxes, Tesco had them for over a week already.
However some fish, particularly white fish, are better when matured, has some flavour. I ate some at an award-winning fish and chip shop in the Shetlands where, because of the freshness, the fish lacked flavour. 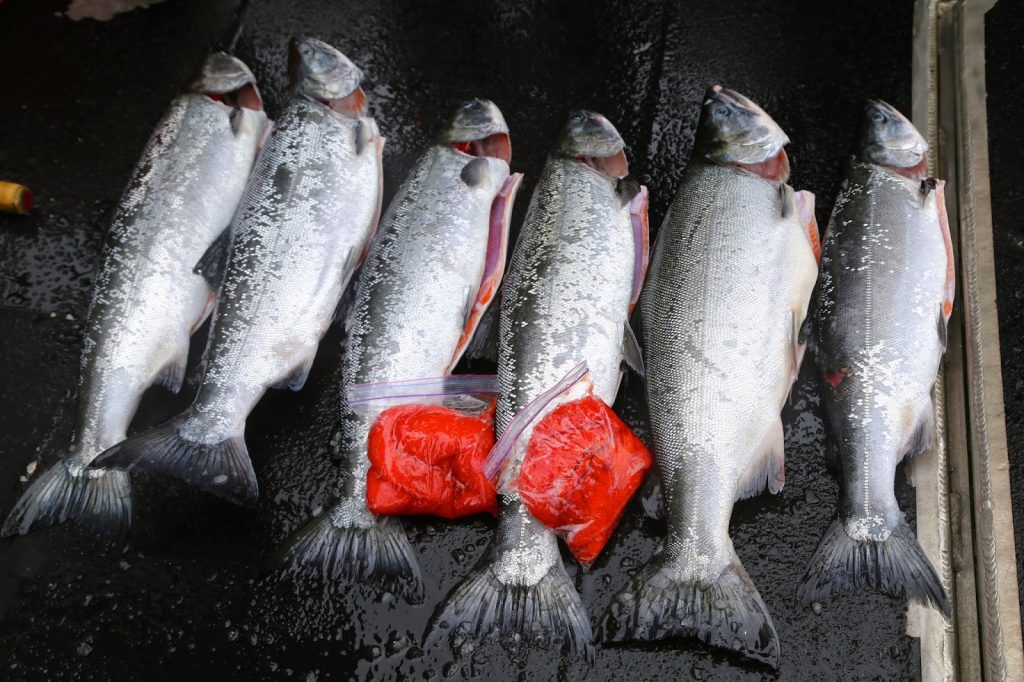 Our catch with packets of salmon roe removed from the females

When I left Sitka on Alaskan airways from the tiny airport (where The Nugget restaurant serves excellent home-baked fruit pies), I noticed that most of the check-in luggage on trolleys and also on the carousel consisted of large white cardboard boxes labelled ‘chilled’. One of the burly men who formed the majority of the aircraft passenger list said it was fish from their fishing trip. The atmosphere on the flight brimmed with the air of happy testosterone, bottles of whisky ordered from the attendants and passed around. But I didn’t get to fly the ‘salmon thirty salmon’.

Previous Post: « Sleepless in Seattle, 24 hours of eating and drinking
Next Post: Weddings and food in Sicily »