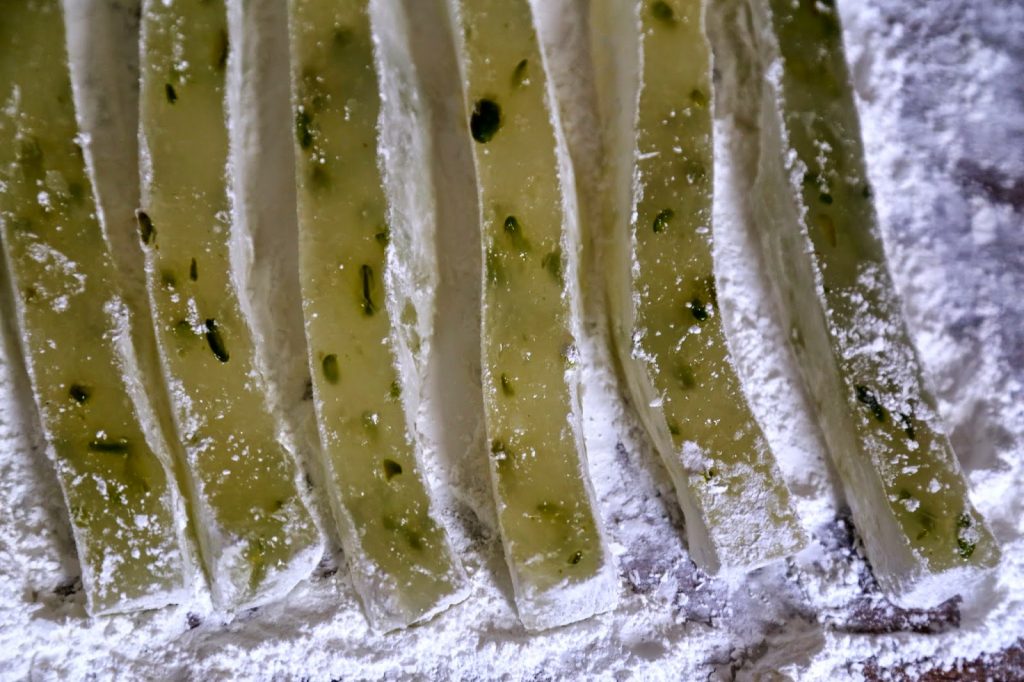 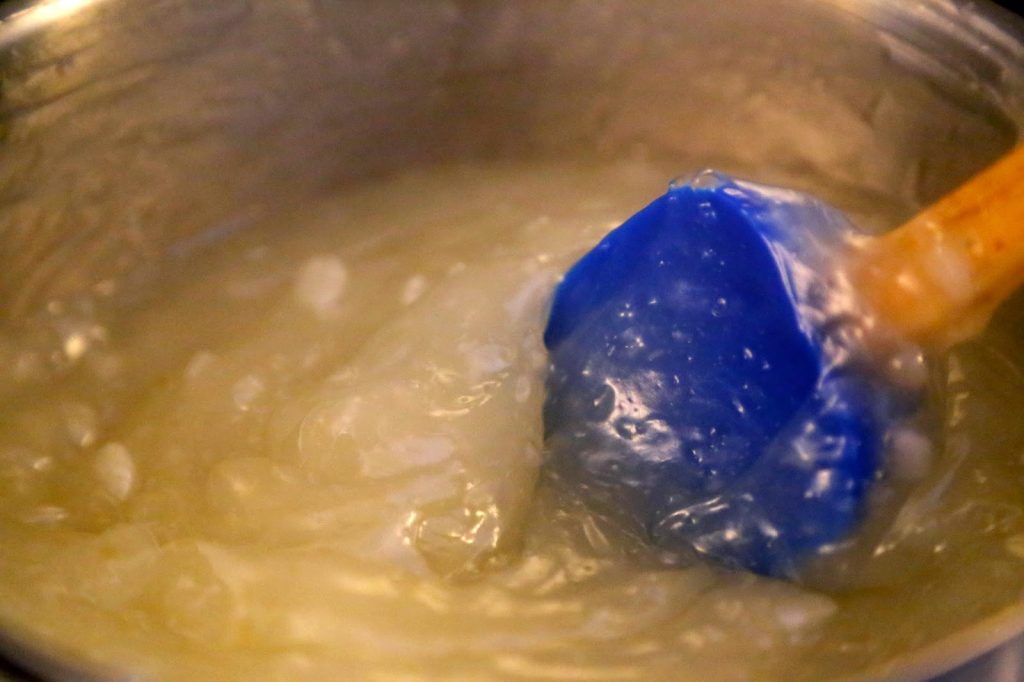 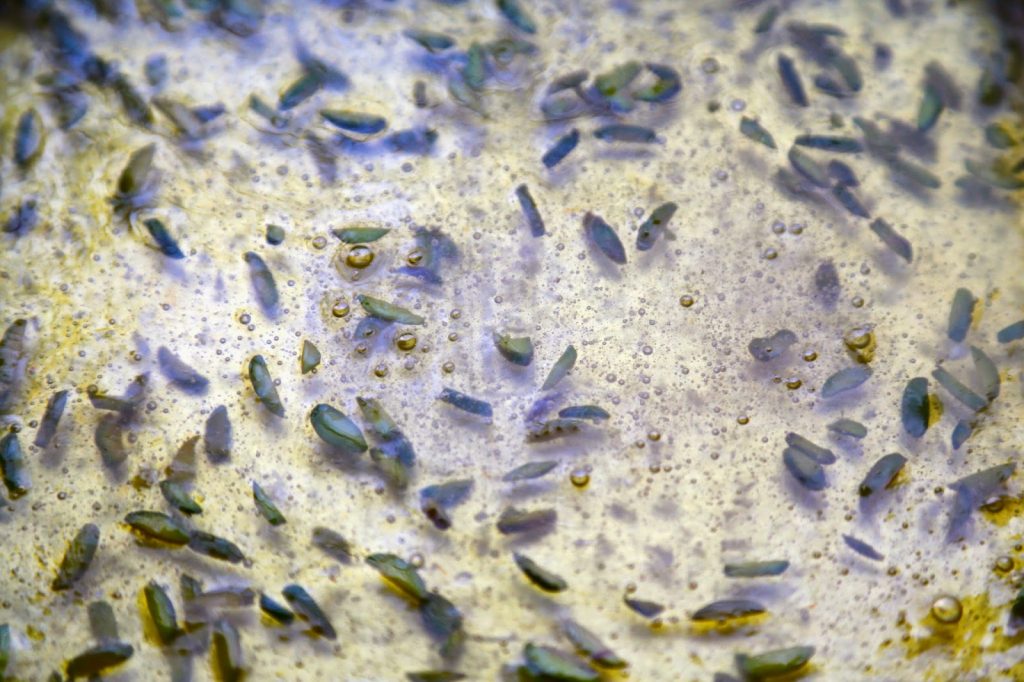 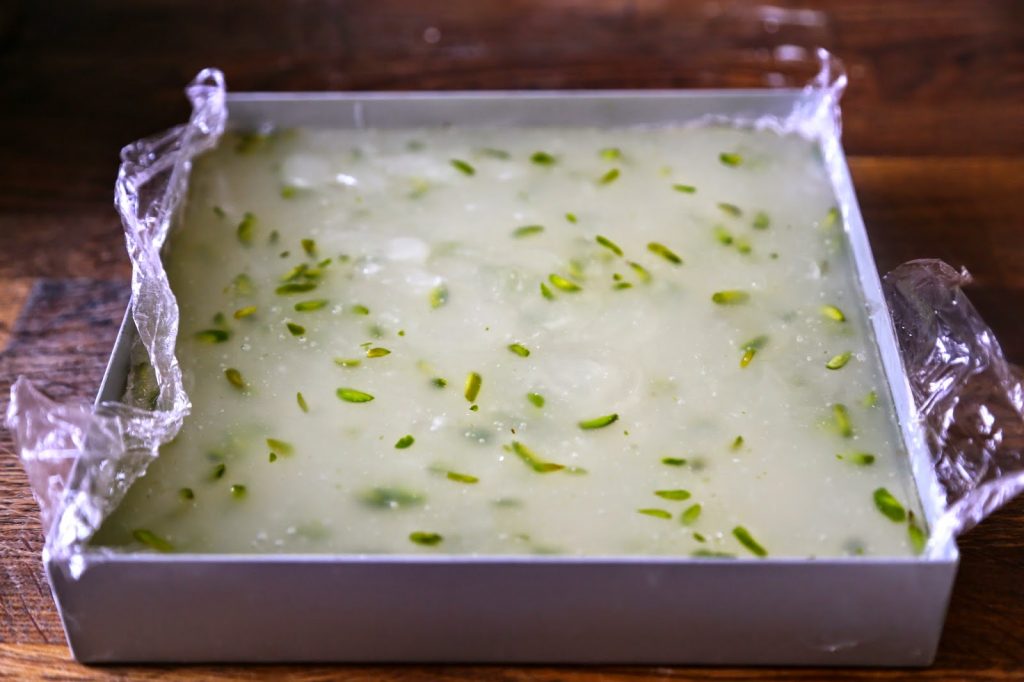 Once the raki is added, it goes milky white 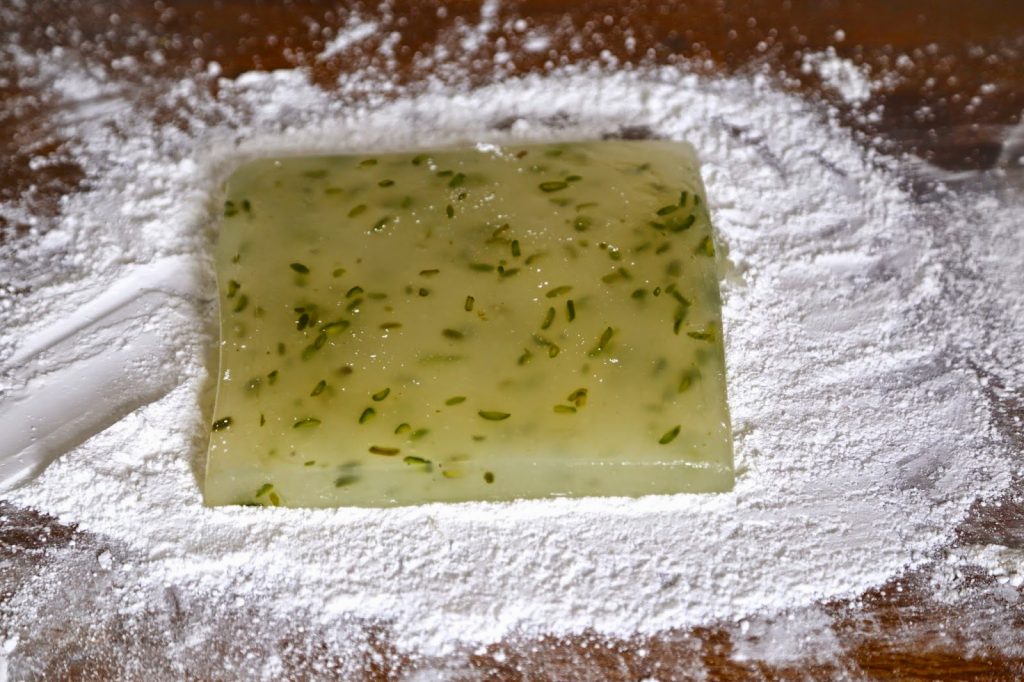 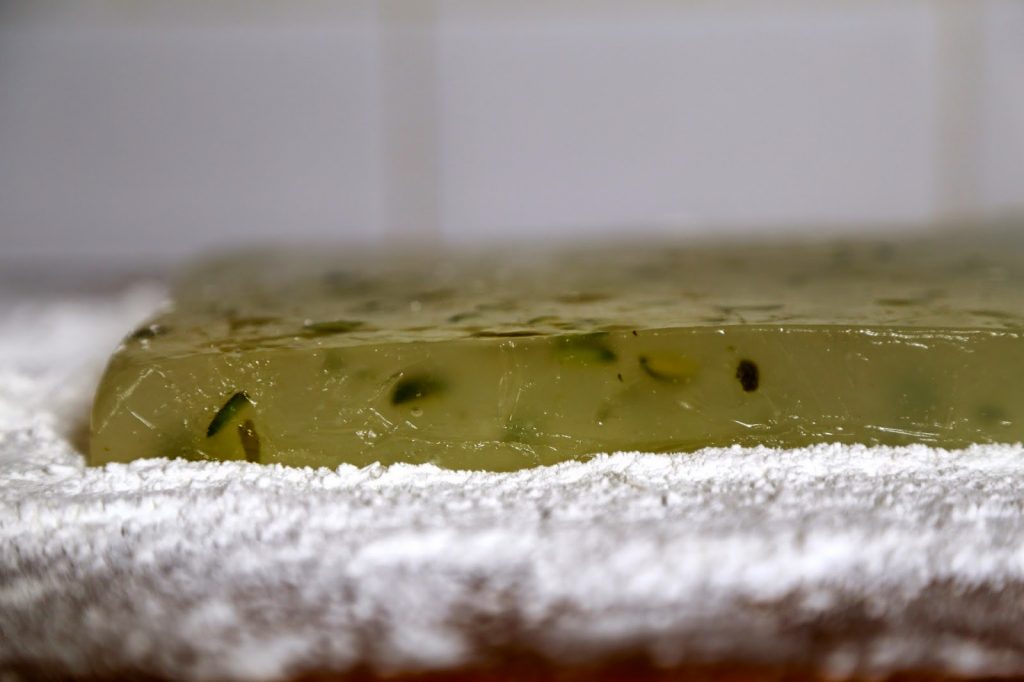 This recipe is soft enough to have a gorgeous mouth feel 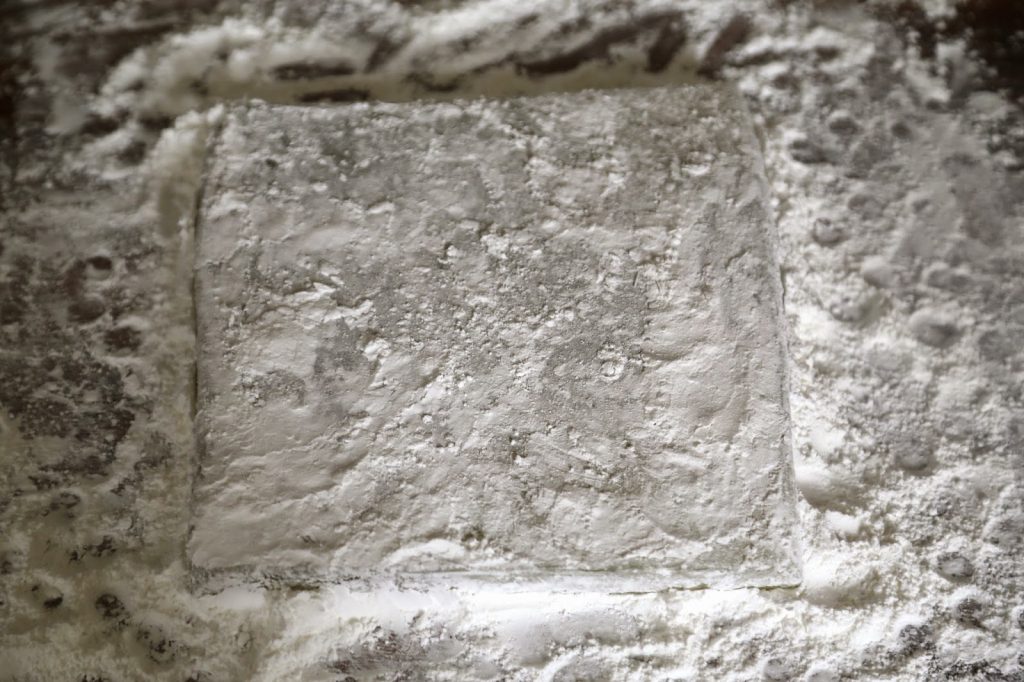 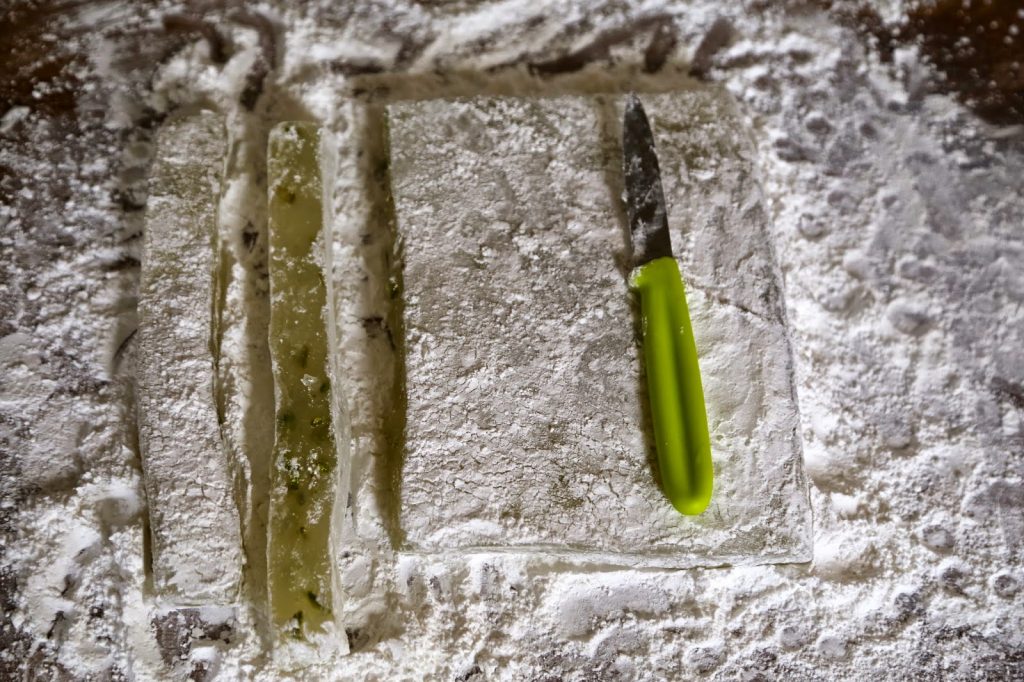 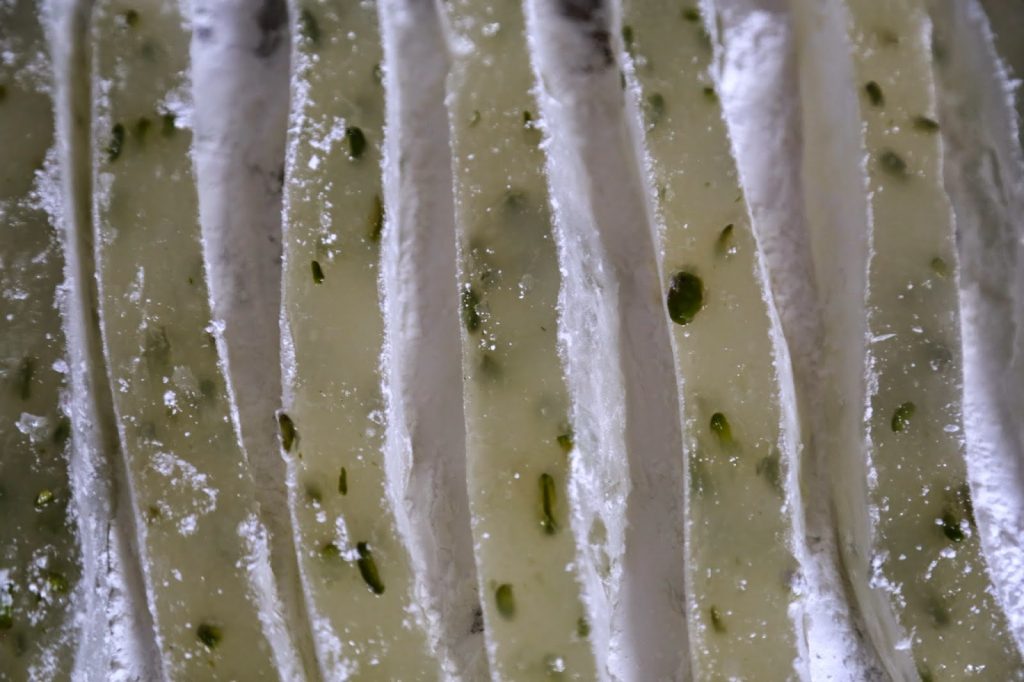 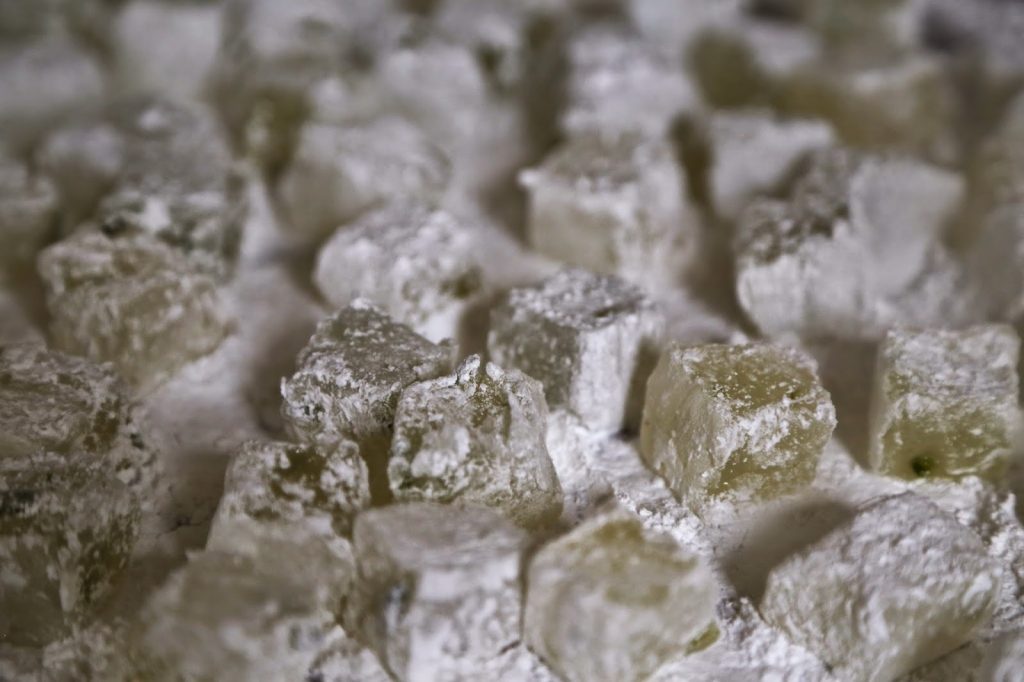 The saga of creating Turkish Delight: it’s not an easy recipe, requiring approximately an hour and a half at the stove, stirring constantly. Things can go wrong: my first attempt, due to following an untested recipe (readers, if there is no photo, you can generally be sure the writer didn’t test it) and a moments inattention, ended up dotted with little rock-hard lumps, rendering it inedible. The second attempt, which had too much cornflour in anyway, I got a phone call and even though I’d only stopped stirring for perhaps a couple of minutes, the bottom burnt and I had to chuck it.
I sighed and started again: third time lucky. I reduced the cornflour too.
Traditional Turkish Delight is thickened and set with cornflour not gelatine, meaning that in its proper form, it is vegan. The key to this recipe is getting the amount of cornflour right: too much and it becomes impossible to stir towards the latter stages and sets too hard; too little and it sets too soft.
Other complications in creating this recipe included announcing, while on a press trip to Istanbul, that I had this fabulous idea for raki flavoured Turkish Delight, raki being the Turkish aniseed flavoured drink, and then discovering that one of the other bloggers at the lunch table, erm nicked the idea (consciously or unconsciously, it’s amazing how we absorb things) and blogged about it before I could get to it. I mention this in case any readers do a little google and think that I have copied the idea from someone else.
The raki tempers the sometimes cloying sweetness of Turkish delight, adding a naughty alcoholic edge. I wanted to keep the Delight as pale as possible, like raki itself, avoiding notes of amber, and stud it with bright green nibbed pistachios, like insects caught in resin.
I finally got there and am pleased with the results. I will be serving this at a Yeni raki supper club in March where I’ll be exploring other culinary possibilities of this delicious drink.


For the Turkish Delight:
800g white sugar
375ml of water
Juice of half a lemon
140g cornflour
1 tsp cream of tartar
500ml of cold water

but you could also use:
1 tbsp of rose water
or
1 tbsp of orange flower water
or
a few drops of lemon essence
and/or
a handful of blanched almonds or blanched hazelnuts or macadamias
plus a few drops of food colouring say pink or orange or yellow.

To dust:
2 cups of icing sugar
1/2 cup of cornflour

(I’ve used cups here because you don’t have to be accurate to dust, you just want a generous quantity)

Prepare the cake tin by draping cling film (saran wrap) over it, covering the sides, and spraying oil over the clingfilm.
Measure out the sugar, water and lemon juice in one saucepan. Put the cornflour, cream of tartar and cold water in the other, larger saucepan, stirring/whisking well as you pour so that there are no lumps.
Bring the sugar/water/lemon pan up to boil, stirring all the time. Once it reaches 115º (the soft ball stage) remove it from the heat. This will take around ten to fifteen minutes.
Take the other pan with the cornflour, cream of tartar and cold water and simmer the mixture so that it is warming up. Once the sugar pan is ready, pour it into the cornflour saucepan, a little at a time, stirring all the time, so that it is incorporated. Once all the hot sugar is incorporated, settle in for a long wait by the stove, stirring on a low heat for an hour.
On my third go, bored stiff, I prepared my iPad with a movie, propped it up and watched while stirring. This made the hour go by a lot faster.
The mixture will become stiffer and stiffer.
When the hour is up, add the pistachio nuts to the mix then pour the mixture into the prepared cake tin. Leave to cool and set in a cool place but not in the fridge.
Prepare a flat surface with the icing sugar and cornflour. When the Turkish delight is cool, pull up the sides of the oiled clingfilm and flip it onto the icing sugared/cornfloured surface.
Flip it over again so that both sides are thickly covered.
Using an oiled knife cut the Turkish Delight into inch squares (2.5 cms by 2.5cms). Turn each side of the squares in the powder so that every bit is covered.
Set the squares aside and put the icing sugar/cornflour mix into a pretty box lined with waxed paper. Place the Turkish Delight squares into the box. 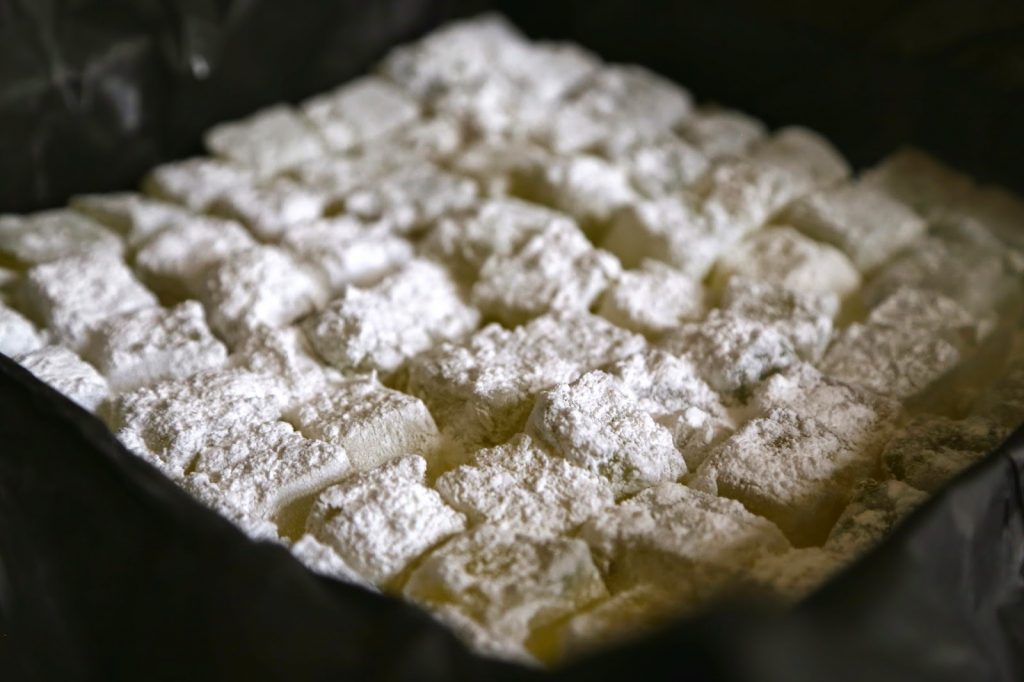