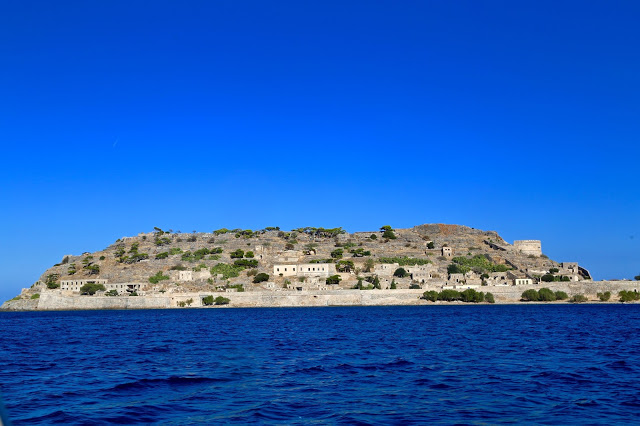 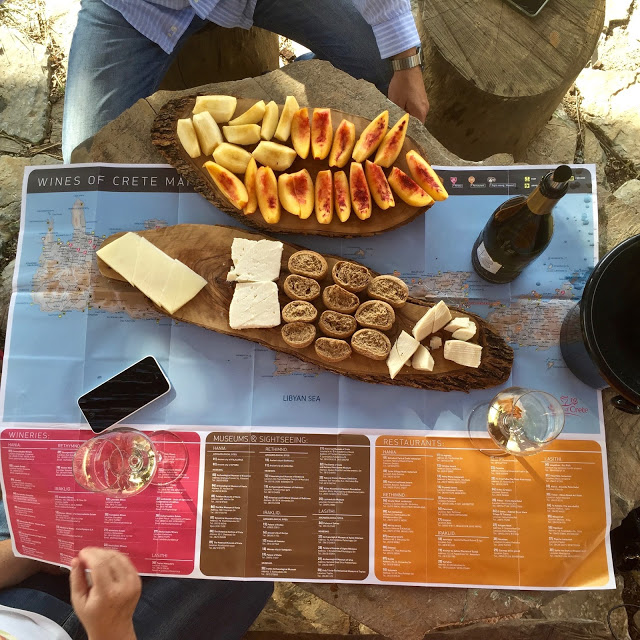 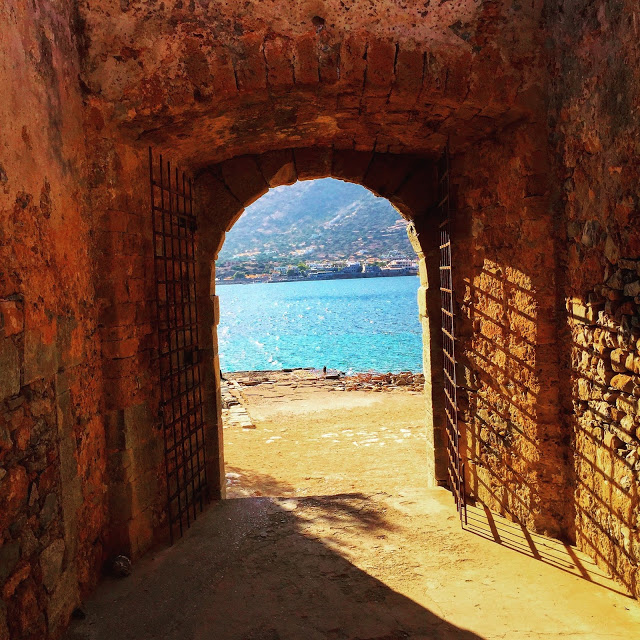 The best Greek cuisine, most Greeks will agree, come from the island of Crete. In ancient times Crete was the centre of the ancient Minoan culture, the earliest known advanced civilisation in Europe. (Astrological note: in world astrology, each great year lasts 2000 years. We are emerging from the age of Pisces going into the age of Aquarius. The Minoan period, obsessed with bulls, was the Taurean age.) It has always been a mercantile, trading island, thanks to its position midway between Europe and  Africa. This geographical location also means that Crete benefits from a particular micro climate, which is fantastic for growing fruit, vegetables, producing high quality olive oil, cheese, yoghurt, honey and wine. Until the 1960s, there was an emphasis on a vegetarian diet, meat was eaten on special occasions.
I stayed opposite Spinalonga island, the leper’s colony about which Victoria Hislop wrote so movingly in her novel The Island. (Definitely recommended reading if you visit, it was quite funny that people didn’t realise her husband, Ian Hislop, is far more famous in the UK. They’d never heard of him in Crete.)
I only spent two days in Crete, mostly holed up in a posh hotel, so here is just a brief look. 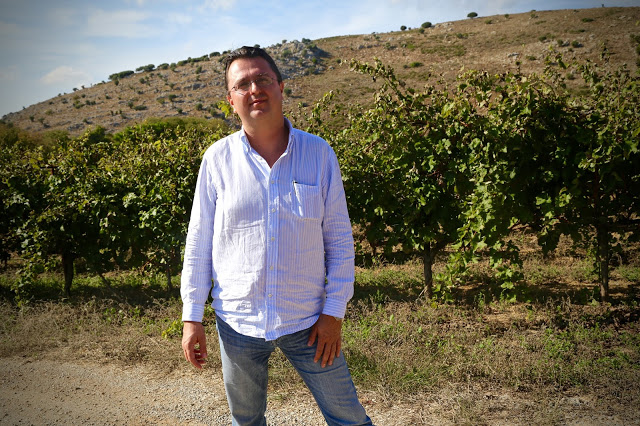 I spent an afternoon with Nikos Miliarakis, owner of Minos wines in the Peza area of the island, and tasted the range of his wines. It’s an ideal spot, with a cool maritime breeze and mountains that protect the vines from the hot southern winds. We strolled along the vineyard, brushing branches heavy with plump olives out of our path. The sky was marine blue, the sun was shining, a perfect summer’s day in October. Nikos told me that the olives would be ready for harvest in December.
I asked Nikos about Greek wine today:

“Thirty years ago, Greece was known for cheap resinous wines for package holiday tourists. But for the last ten or fifteen years we have been producing dry and sweet wines which are not resinous, not retsina. We cultivate Cretan varieties such as Vidiano, Kotsifali and Mandilari as well as Mourvèdre and other international grapes. We age them first in steel then in French oak barrels.” 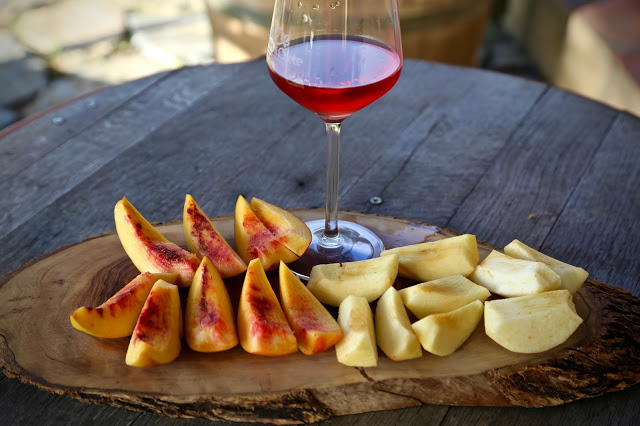 I sipped the wines while snacking on different Cretan cheeses and fruits. Nikos talked about how hard it was to run the business during the recent crisis:

“We were prepared to a certain extent, we knew capital controls were coming but we didn’t think businesses would also only be allowed to get out 60 euros a day.”

“Sixty euros a day? How can you run a business like that?”

Nikos laughed, “It’s not possible. We had to cope with that. Even if you are prepared you cannot stock millions, you can stock some money, some cash, to manage the problems for a while.”

Capital controls happened in late June? Is this a crucial time in terms of getting ingredients to produce wines?

“Yes, in order to bottle you need corks and labels, you need money to buy them.
And this year has been difficult, because of the rain, so we needed to treat the wines. In Crete, we treat the wines six or seven times a year, which is not very much. In the North of Greece, it’s like 13, 14 times a year, like in France. This is why we call Crete the green island.”

Nikos expanded on the financial crisis: “In Greece people don’t use e-banking, the percentage of e-banking is much less here than in the rest of Europe. The people are not used to credit cards and e-banking. They don’t trust it because they have badly used credit cards before, having ten and running up credit. Once they understood that this is not the way to do things they said I don’t want any credit cards because it’s too dangerous.”

Now everything is paid by cash?

“There are a lot of things paid by cash, but in Europe, cash doesn’t exist, nobody uses cash. Due to this problem of capital controls, Greek banks have created more cards in two months than in the last five years. So people who didn’t have cards, even old people who didn’t have cards, had to get a card. In order to withdraw cash from the ATM, everybody had to get a card.”

In terms of getting Greece back on its feet economically, food and drink is quite a large part of that?

“Crete is in a better position compared to Athens and Saloniki, it’s thanks to tourism that we have a real income. Even under these critical circumstances it doesn’t stop.”

Was there a dip in numbers of tourists?

“We had some gaps, because people were afraid, ‘Do you have food?’ They believe what they see in the media, on the news.”

We laughed at that. The one thing that Crete always has plenty of is food, being self-sufficient for the most part.

Nikos: “it’s not the food we import, it’s mainly all the rest. Food, cheese, everything… we have it. Most Cretan hotels are all inclusive so you also have consumption of imported foods.

The (only) worst thing we could have after this year is war.”

I read later that day in the Greek national newspaper that British numbers of tourists to Greece have gone up 37% over the summer, a big spike. Nikos’ wine Turtle is available, along with other Greek wines, on Aegean airlines flights, for quite rightly they are serving excellent domestic wines as opposed to foreign wines. 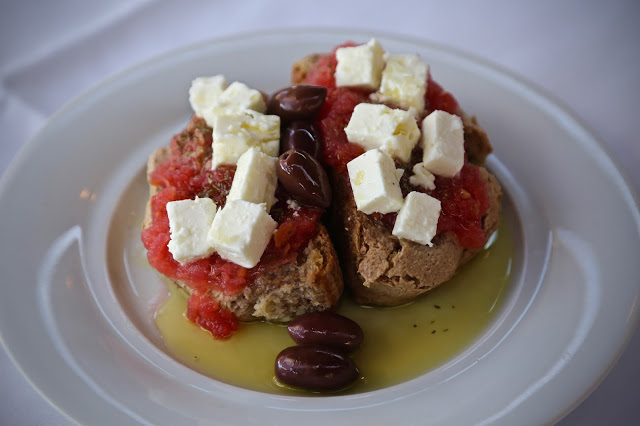 Paximathi is Cretan barley rusk. The Cretan rusk came about because the women worked all day in the fields like the men and didn’t have much time to bake. So they would make a huge batch of bread then dry it in a low oven. This way it would last a month.
They would soften the bread by pouring a little water on it. The ‘dakos’ salad is a crust or two of cretan rusk, then softened with water, olive oil, skinned crushed tomatoes, oregano, salt and pepper, a kind of bruschetta on hard tack. 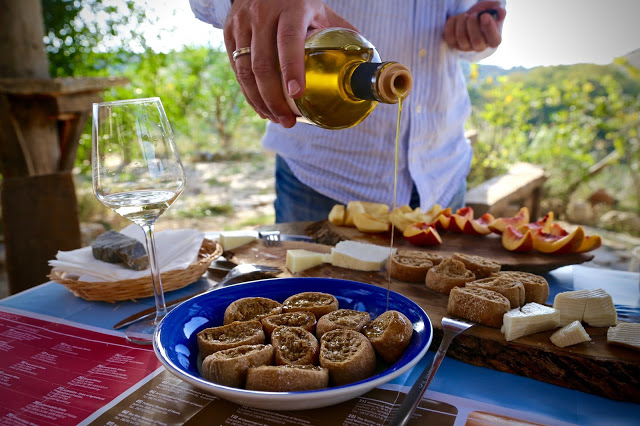 Cretan olive oil is some of the best and most ancient in the world. Much of Italian olive oil is actually bought in bulk from Crete then a small percentage of Italian olive oil is added. It is then bottled in Italy so it can be called Italian olive oil. This is not illegal. (Next month I’m visiting Sicily to find out more about olive oil). This is partly because it is only recently that Cretans wanted to get into the retail side of selling olive oil, it was easier to sell it in bulk. Nowadays they see what a great business it is.
I did an olive oil tasting with a young Cretan, Giorgos Mavrakis returned from Athens to start up a business on the island.  He gave me these tips on what makes a good olive oil and how to taste it.
There are three steps in the tasting of olive oil: 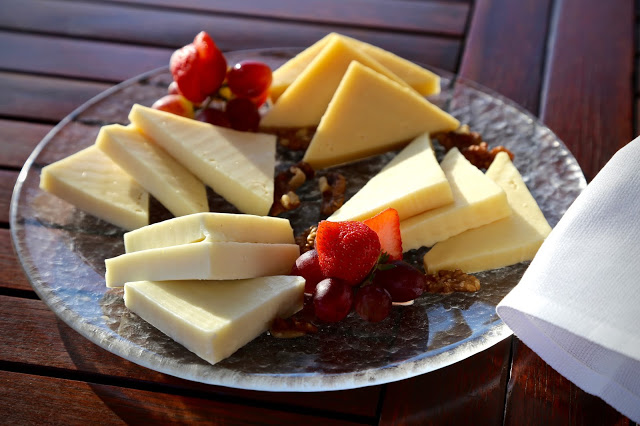 Cretan cheese has several varieties apart from the excellent chalky feta type which is referred to as white cheese: from Graviera (a kind of gruyere) to Myzithra, a young fresh cheese, or the interesting Xinohondro which isn’t a cheese but something like bulgur wheat mixed with yoghurt. A classic dish using xinohondro as a topping is tomato soup, to which it adds body and flavour. (I even saw this being served for breakfast). 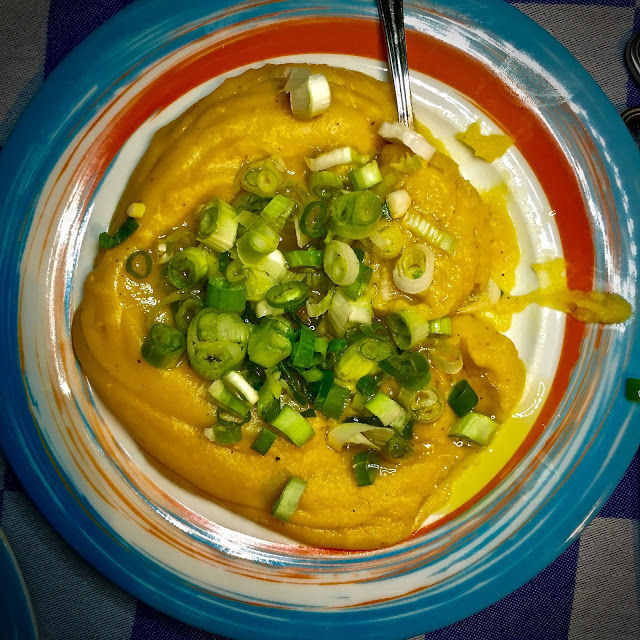 Gigantes beans, a kind of giant baked bean in tomato sauce is a popular meze in Greece but something typically Cretan is favas purée, split yellow pea hummus. It’s made in a similar way, adding olive oil, garlic, salt to cooked and cooled yellow pea puree. You add chopped red or spring onions. Looks rather plain but is a delicious alternative to hummus.

A typically Cretan liqueur using raki and honey. This is a warming drink during colder months and a sweet digestif after dinner. Greek raki is different to Turkish raki, being more like fire water, so the addition of honey is welcome. 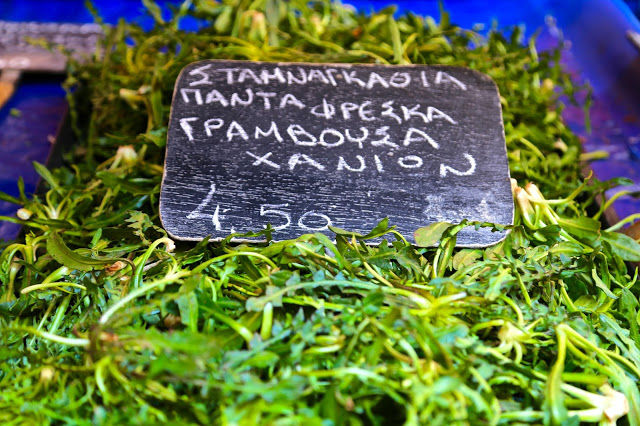 Wild greens or ‘horta’ are heavily used in Cretan cuisine while purslane, also beloved in Georgian food, is an unusual ‘herb’, actually a succulent, that we tend not to use in the UK even though it grows here. Mix crunchy purslane with yoghurt for an unusual tzaziki dip, adding some lemon juice and salt. 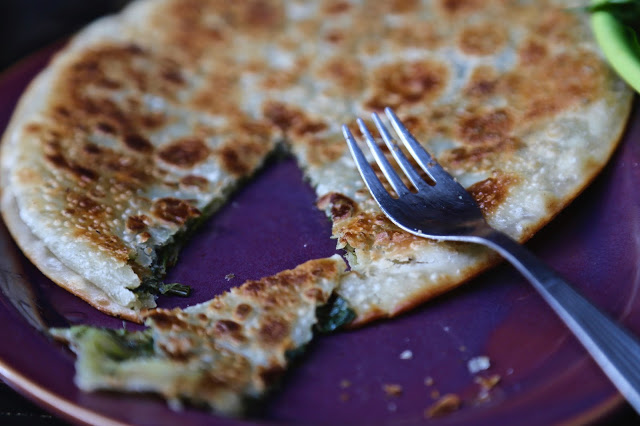 You must try these small flat cheese or horta ‘pies’ with honey, combining sweet and savoury, a very Medieval concept, a spicing that remains in Middle Eastern food.

Crete is famous for its apiculture and honey is used on everything, including savoury dishes, for instance a cheese kaltsounia with honey. In Archanes village, at a wonderful delicatessen/cafe Bakaliko which also gives cooking classes, I had a honey tasting with Meligyris Cretan honey. We tried types of wild thyme honey and woodland honey with sage and with heather. The flavours were strong and fragrant, the wild thyme has anti-bacterial qualities. 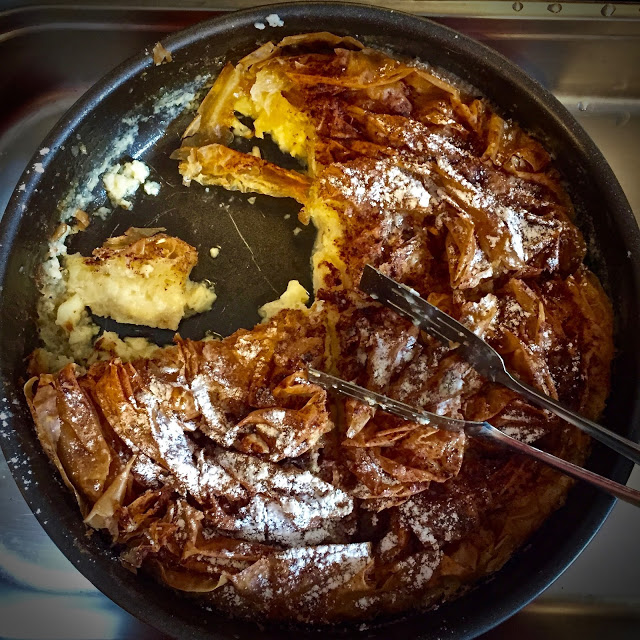 I had bougatsa often for breakfast while in Greece: it’s a kind of sublime custard-filled cinnamon filo pie. Here is a recipe, I must have a go at this myself. (One morning I also had a kind of gooey creme caramel for breakfast.) The breakfast bar at the Blue Palace hotel where I stayed had specialities from around the world: everything from Scandinavian, to Turkish, German, Greek, American, French, English breakfasts. 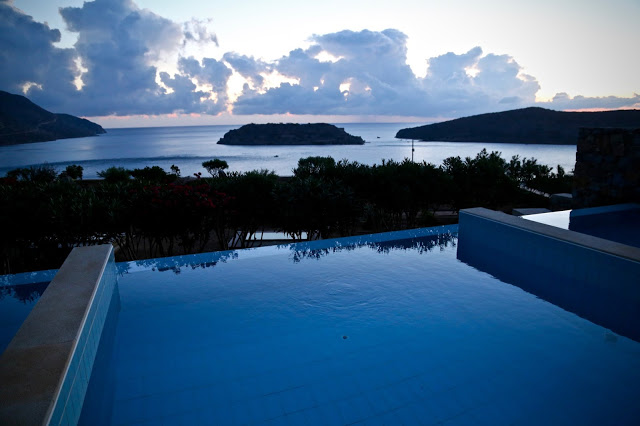 My flight and trip was courtesy of #DiscoverGreece on Aegean airways.