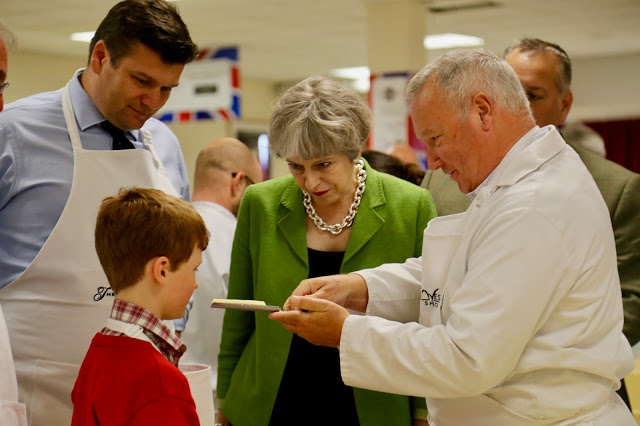 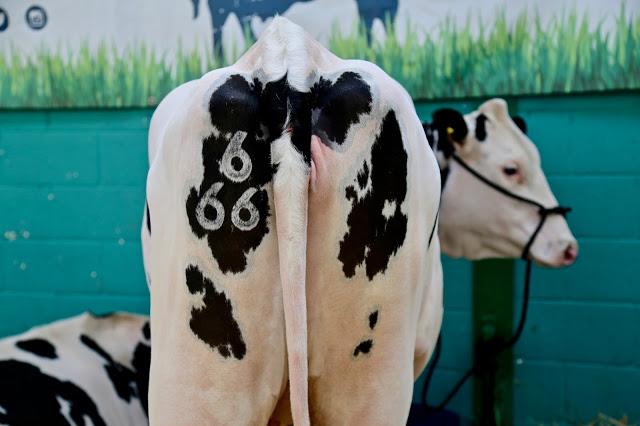 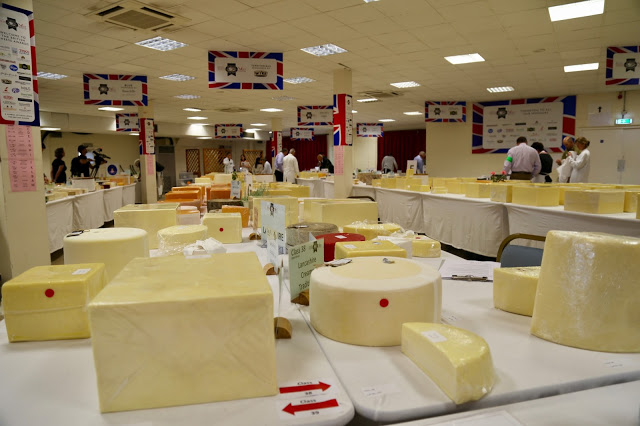 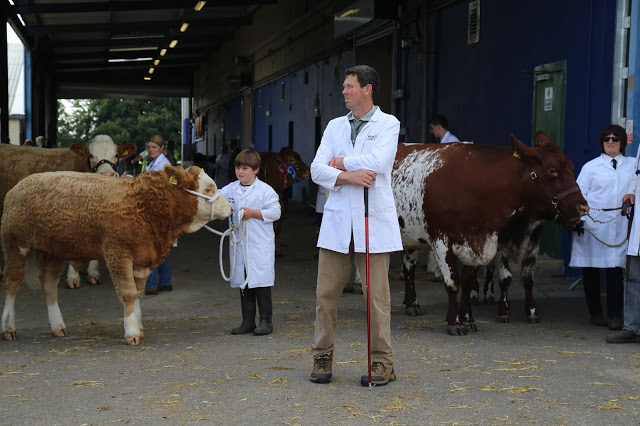 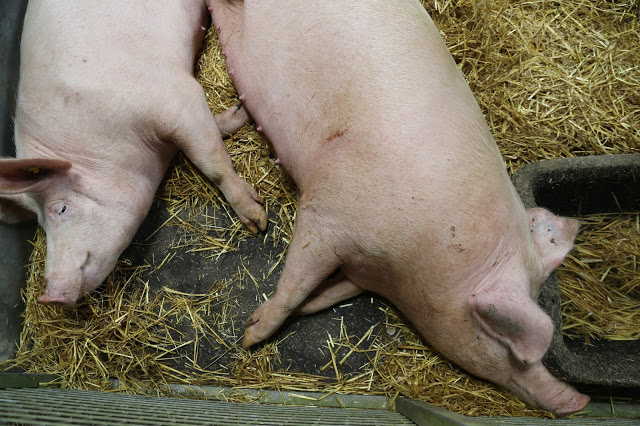 After Shindig Festival, I went to be a judge at the British Cheese Awards.

The awards take place at the annual Royal Bath and West show, which is basically Glasto for farmers. The Cheese Pavilion nestles within a large maze of farming activities. There are grunting hangars full of mobile sausages: bristly hogs or albino-nude pink pigs whose flesh looks creepily human. There are long tented barrows of penned sheep, different colours and sizes, the males with horns so curved you wonder if they grow back into their own skulls. Tall stables of Belgian horses, 20 hands high, like something from a fairy tale, double the height of a person. Shire horses with an Ugg boot effect, their lower legs shaggy with a calf-length creamy sock of fur, their arses decorated with a plaited braid, pony-porn. 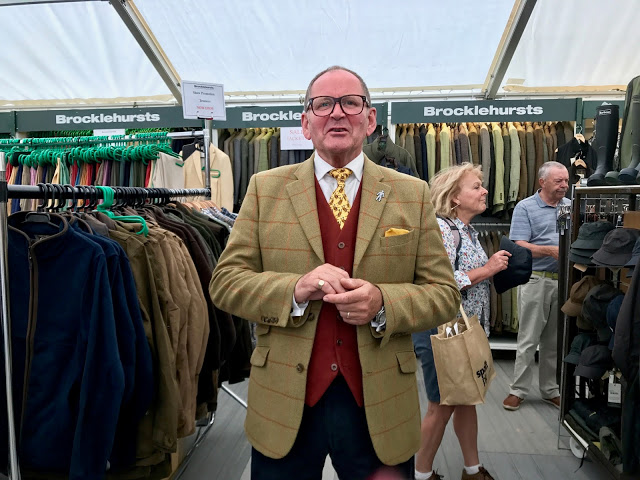 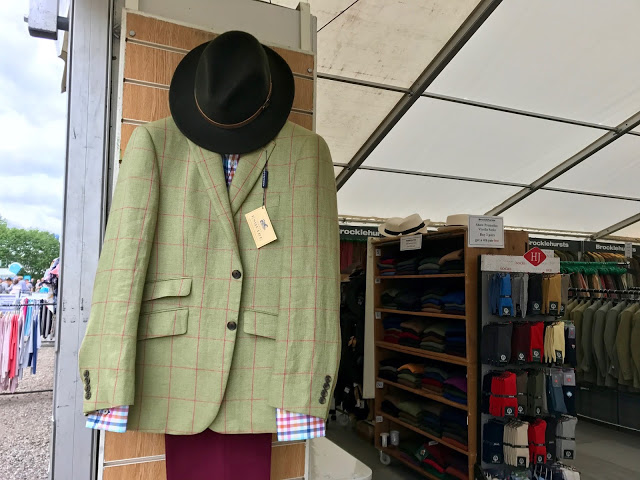 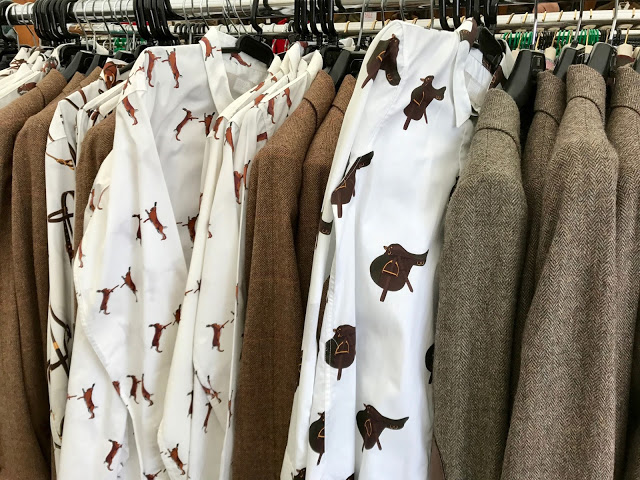 This show enabled me to understand Kate Middleton’s Vogue cover: the one where she is sporting a hat, a simple white or checked shirt and a brown suede coat. Hers is in fact a modern country style, casual-wear for aristos. Although France is the centre of haute-couture, their style is ultimately an imitation of English country clothes: heathery tweeds, riding coats, barbours, hacking jackets, ‘le smoking’, waistcoats, crisp flawless high-necked polos; in short – beautifully tailored, quality classic wear. Stalls for Barbour, Ariat, Brocklehursts, shirts with horse motifs, foxes, sold by smart men in red woollen waistcoats and yellow ties and kerchiefs revealing the subtleties of English country style. 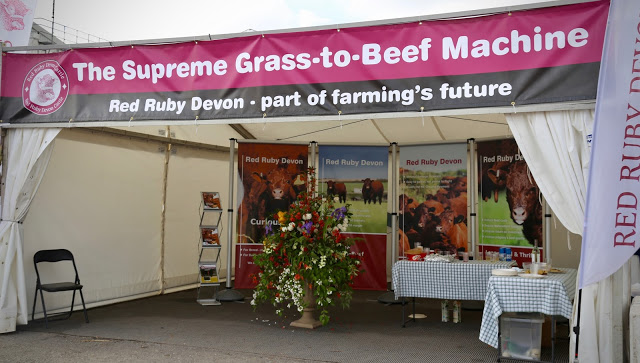 Farm-children play with Tractor Ted toys. Adult farmers buy big shiny tractors. Areas are devoted to cider, owls and hawks roost on gnarled branches. Farmers line up to lead their potentially prize-winning cows by the nose, their wives spraying and combing the back end, that last minute touch-up. Men in brown plus fours showed off their obedient dogs, by lightly stroking the back of an English Pointer, you can freeze it for minutes, mid-step. A whole new world for this Londoner- I was in agricultural Disneyland. My only dismay was the description of the animals as ‘meat machines’. One stand, selling a ‘brand’ of cows, boasted a banner: ‘The supreme grass to beef machine’. 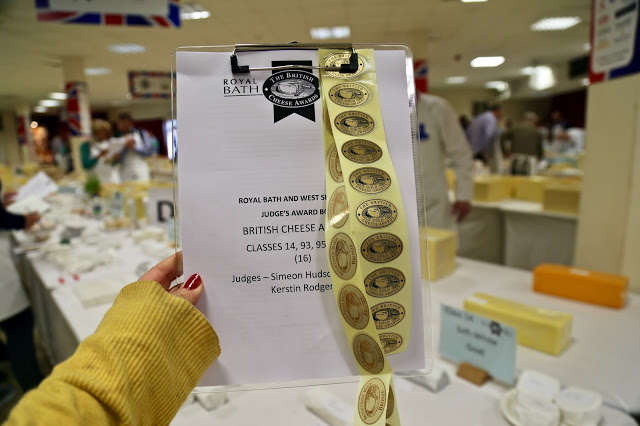 On arrival I was given a white apron with the words British Cheese Awards embroidered upon it by my BnB landlady. I was also handed a blue ribbon on a pin, like a medal, with the words ‘judge’. I’ve  felt proud, like I’d won a prize myself. 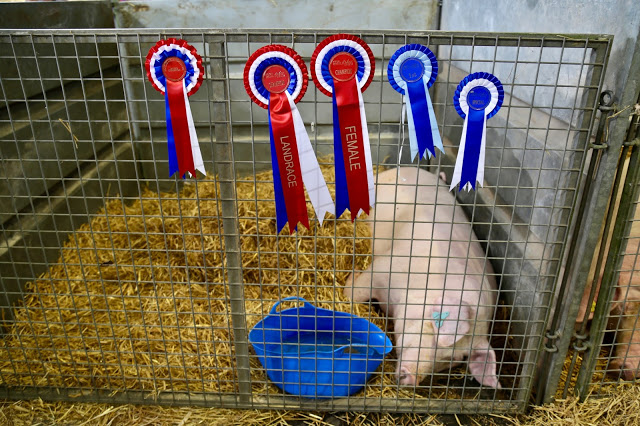 We were allotted judging partners. I got the elegant Simeon Hudson-Evans of Fromage to Age who I dubbed my ‘cheese husband’. Later jokingly he referred to me as his ‘cheese bitch’, I got revenge by calling him my ‘cheese dad’.
Cheese people: the farmers, makers, affineurs, maturers, dealers and sellers, are a rumbustious and informal lot. I got the feeling that plenty of wine, beer, cider and cheese ‘matching’ occurred both before and after the awards. I also discovered that I can eat an unfeasible amount of cheese. I ate even more at the raucous Cheese Awards dinner in the evening. 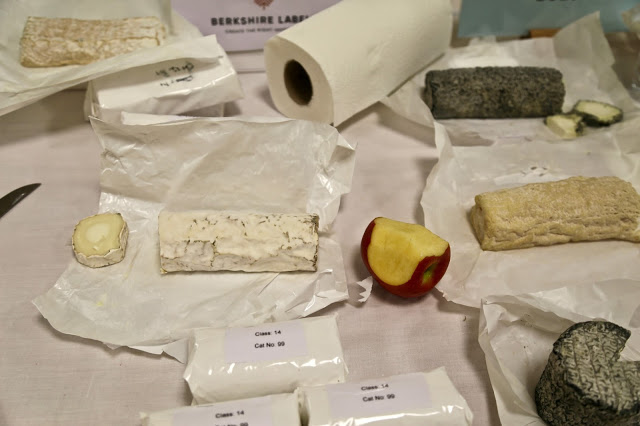 I’d declared myself a bit of a goat cheese expert (meaning that I like it a lot) so we were given ‘soft whites’ to judge. There are seven different types of cheese altogether, using something called the ‘rind method’ of classification. I quote here from the British Cheese awards:

Typically only 1-15 days old without time to develop
a rind and only a subtle ‘lactic’ flavour. Often
covered with leaves, herbs or rolled in ash.

Examples: St Tola, Aged Cerney, Crottin, Pablo Cabrito
Some Fresh cheeses are left to dry out, the rind
wrinkles and Geotricum and other moulds – from
white, to bluish grey – develop, creating a more
pronounced flavour. Traditionally made with goats’
milk but can be made with any milk.

The curd retains much of the whey, ensuring the
cheese becomes soft and creamy and grows a
white mould, Penicillin candidum. Unpasteurised
varieties develop a reddish-brown ferment on the
rind whereas pasteurised versions are more ‘Persil’
white in appearance. Some are made by adding
cream to the milk.

The curd is placed in moulds and typically lightly
pressed to ensure the texture is supple, elastic or
even almost liquid. Some are encouraged to
develop a multitude of moulds which are regularly
brushed off building up a thickish rind, protecting
the cheese and allowing it to mature.

Some are ‘washed’ in brine creating an orange/pink
rind with a strong, piquant flavour and aroma.

These range from small truckles with a fine crumbly
texture and only a week or 2 old to hard 36 month
old cheddars. They can be made with cow, goat,
ewe or buffalo milk. Many are packed in moulds
lined with cheesecloth and firmly pressed.

Traditional British blues have dry crusty rinds and
internal blueing however modern cheesemakers
often make more European style blues with higher
internal moisture and sticky, grey-blue rinds. Some
blues are made by encouraging the blue mould to
grow on the outside. 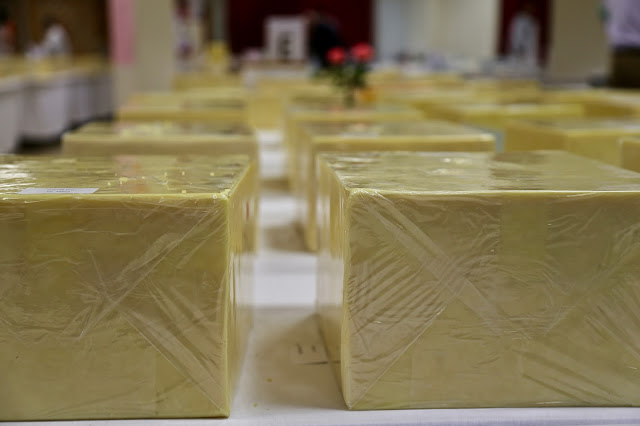 Apparently if you are in the top judges bad books, you get to taste vast yellow blocks of industrial cheddar all day, virtually indistinguishable from each other. One fellow judge complained about being given the butter tasting.

‘I’d like that’ I admitted. I can eat butter in chunks, without bread.

Judges are asked to bring a cheese iron, which I don’t possess. This is a long metal tool that looks like an apple corer. It is inserted into large wheels of cheese, pulled out with a sample from a cross-section, then the hole is patched up again. The tubular section of cheddar, for instance, is rubbed together, smelled, sniffed, checked for taste, flavour, length and faults. 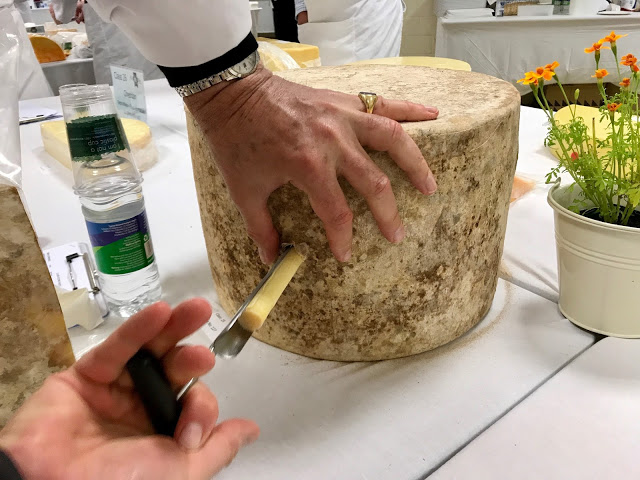 We have about 15 -20 goats cheeses to try. We start by unwrapping them to save time. None of them are identifiable by name, only by a numbered code.
Simeon suggested we try five cheeses to adjust our tastebuds. The first five were all ok-ish, but the sixth blew our minds: salty, acidic, no ammoniac smell, lovely texture, artisanal look.  Cheese number 8 is gorgeous: wrinkly on the outside, buttercup yellow, perfectly ripe with a perfectly round central core of chalky texture and a gooey outer rim which doesn’t slip off the rind. We give it 50 points.

‘How often does this happen?’ I ask Simeon.

‘Rarely’ he admits. ‘When it’s this good, you are looking for faults- reasons to remove a point.’

‘It just keeps going’ I say. Prickles of new flavour keep happening on my tongue. ‘This has length’.

‘It’s on a whole other level’, nods Simeon appreciatively. ‘So unique’.

‘Extra-terrestrial’ I pipe up, trying to think of apt descriptors. ‘More than a cheese, a new dimension even’.

I want to eat more of it, which is a good sign because I’ve already had around 300g of goat cheese.
Cheese number 10, a late arrival, is too cold and we leave it till last. When we circle back round to it, the long rectangular bullion shaped cheese is beautiful, garnering another 50 points, full marks.

Then something unexpected happens: a flurry of activity, urgent hisses of ‘look busy’ and ‘act natural’ or ‘Fill that empty patch of the room over there’ and ‘She’s coming’.
Our Prime Minister Theresa May walks into the room, with a couple of men in suits. She’s wearing a bright green jacket and heavy chain-linked silver jewellery. Simeon shoves his iron into a cloth bound truckle and proffers it:

T May pulls out a tube of inner cheese and munches on it thoughtfully. She’s about to pass on. I want to make contact I think.
This anarcho-rebel doesn’t wrestle the Conservative Prime Minister to the floor shouting something worthy and revolutionary. I say:

Theresa’s face breaks into a smile:

She then moves onto another cheese maker who asks if she wants a taste of Brexit Blue, a cheese that Tim Rowcliffe copyrighted 10 days after the referendum. She throws her head back and laughs.

It’s funny because last week I met Labour leader Jeremy Corbyn in the street unlocking his bicycle. Despite being in a hurry to go to his next meeting, he took the time to chat. I talked to him about doing a veggie supper club. Two leaders met in a week, fancy that!
I’ll be voting for Jeremy. I like the Labour manifesto and it’s time to give a properly left-wing leader a chance. 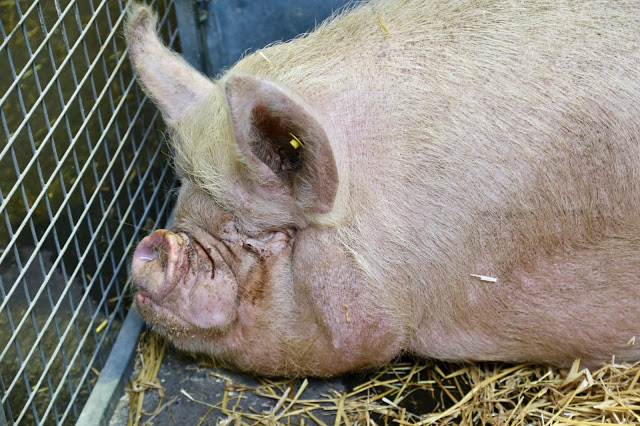 Previous Post: « Shingdig Festival and tips to survive the festival season
Next Post: Election Day at The Underground Restaurant plus recipe for election day samosas »