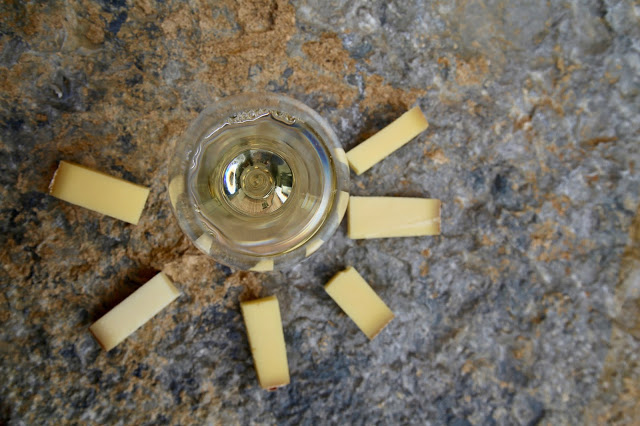 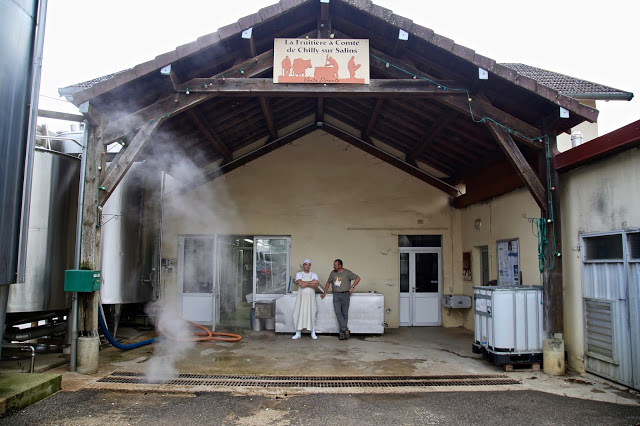 Every day in France, at least one farmer commits suicide. Isolation, few marriage prospects, poor status, long hours, no holidays and a low income contribute to this sad situation. But dairy farmers living in the French département of Franche-Comté are an exception. Their farms are home to the most beautiful cows in the world, the brown and cream Montbeliarde. Cow bells tinkling, they pasture on the green hills of the Jura, like a children’s picture book illustration. Each pampered cow has a hectare to graze upon.


These farmers earn a good living. The milk they produce is so rich, so high in protein that it is worth twice as much as British dairy farmers get for their milk. This high quality milk produces France’s most popular cheese, which is not Brie or Camembert or Roquefort – but Comté. Comté is the nearest French cheese to cheddar. I met a passionate farmer with the mononym ‘Tas’, a leather hatted cowboy whose parents and grandparents farmed before him.

‘Why are you called Tas?’ I asked, thinking it wasn’t a very French name.
‘From travelling,’ he twinkled.
‘Is it something Turkish?’ I guessed.
‘Further south.’
‘Tasmania?’
‘Yes, that’s it.’

I wasn’t sure if I believed him.

Tas was ruggedly handsome, with blue eyes and blond hair. He looked more German than French as Franche-Comté is close to the Swiss and German borders. We chatted over dinner in the grand dining room of the hotel. He was wearing a crisp white shirt with a ‘Comté’ appliqué on the collar and two wolves and a moon appliquéd on the pocket.

‘I like your shirt,’ I said.
‘Tas always wears a Comté shirt,’ he puffed proudly.

‘Uh huh.’ I was so confused by the fact that he spoke about himself in the third person, I didn’t have time to feel insulted.

Sandra, the red-maned French PR came over, crouched between us and said:

‘Please explain to Tas why the internet is important.’

Tas replied: ‘Tas thinks parents who let their children be on the internet in their rooms is not a good parent. Tas thinks families who allow mobile phones at the dinner table are making a big mistake.’

I agreed with Tas but explained that to choose not to use the internet is the equivalent today of refusing to learn to read and write.

His blue eyes burned at me.

I clarified, trying to appeal to Tas, by saying that the internet – blogging, social media – is a way of democratising self-expression, publishing and writing. Tas nodded. 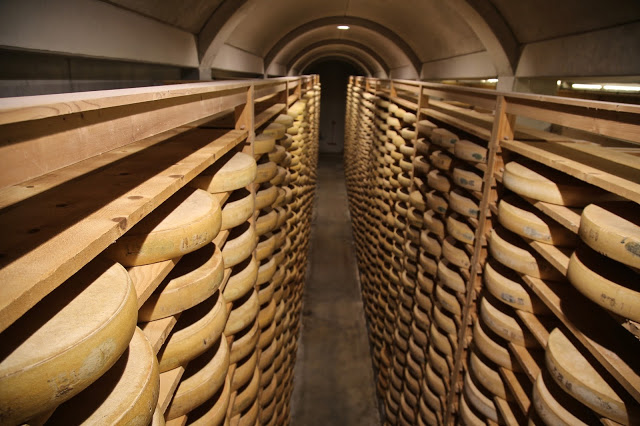 The next day Tas leads myself and a group of bloggers to an enormous cheese cave, a former fortress, housing 100,000 wheels of Comté. The smell of ammoniac is overpowering.

Every day these cheeses are turned and inspected. As time goes on, the cheese is inspected once a week, then once a month and so on. They are aged up to 18 months. Each wheel weighs 40 kilos.

‘This is why only men could work here. A woman is allowed by law to lift up to 25 kilos,’ explained Tas. ‘Today a robot does most of the work, guided by the 15 affineurs (cheese maturers) that work here.’

The cheeses are stacked on rows of spruce wood shelves up to 40 metres high. We watch a robot trundle along the passage way, lift up a metal shelf with a plank of wood, pull out a yard-wide cheese wheel, lower it, brush the top with a brine solution then raise it back to its place on high. The work is hypnotic.

Towards the last few months of maturation, the wheels are tapped all around with a sonde (both hammer and cheese iron). The sound of the cheese hints at the age within: a hollow sound suggests a crack. The other end of the sonde is used to sample a tube of cheese. The cheese is sniffed and rubbed between the fingers – if the top part breaks off, it’s ready. The rest is reinserted back into the cheese and smoothed over.


Comté is a thousand years old, but until the 1960s it was referred to as Gruyère. Comté comes from the Gruyère family of cheeses. Emmentale, often conflated with Gruyère, is an industrialised cheese that is ‘matured’ very rapidly, hence the lack of flavour, using gas and heat to create the holes. 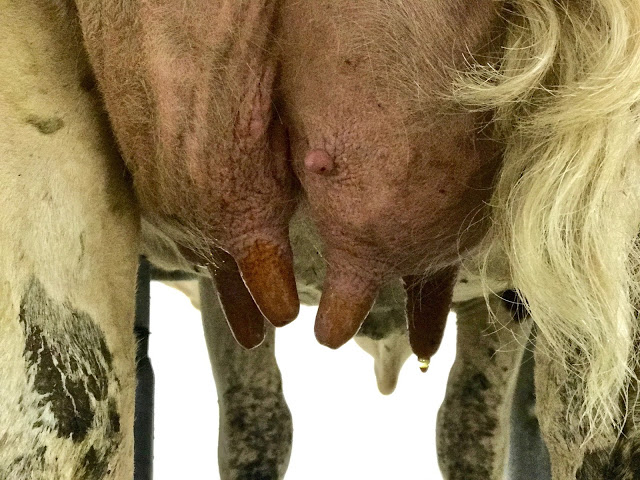 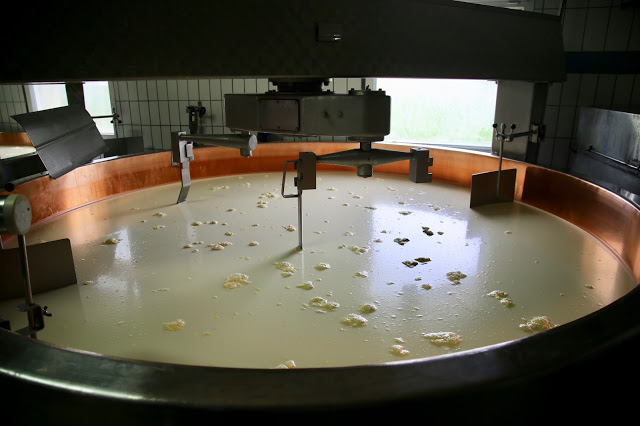 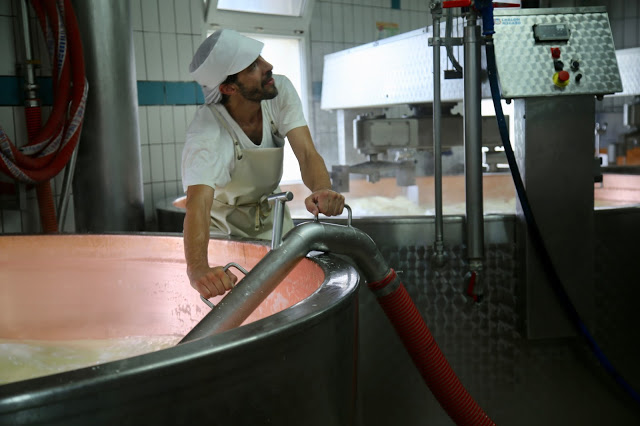 Comté is made with raw milk, which I tasted warm and frothy from the udder. A farmer such as Tas will milk his cows and deliver it directly to a fruitière. In the Middle Ages, farmers had only one or two cows each. They formed co-operatives called fruitières to supply enough milk to make cheese. We visited a fruitière: the fruit of the workers.

The dairy or fruitière smells like steamed milk. The cheesemakers wear white rubber boots, doctor’s coats, hair nets. It’s hot in there.  The raw milk is heated to 12ºC then ‘ripened’ to 31ºC in a huge open copper tank. Cheese culture is added and the milk is further heated for 45 minutes to reach 56ºC when the rennet is mixed in.

The curds are finely cut to the width of a grain of rice and at this point, the petit lait (whey) and curds are separated. The whey is drained into another tank to be dried into a powder and used in baby formula, biscuits, medicines.

The curds are vacuumed – literally, with a giant sterilised vacuum cleaner – into smaller Comté wheel-sized tanks, where it is pressed into moulds. To make the distinctive rind, the cheeses are washed with salt.

‘The cheese are ours for only a few weeks,’ explained Tas, ‘then they are taken to the affineurs, a cave where the cheeses are matured’.

Each cheese wheel uses 400 litres of milk and weighs 40 kilos at the end. A ratio of 40 to 1. Cheese is, after all, portable milk. 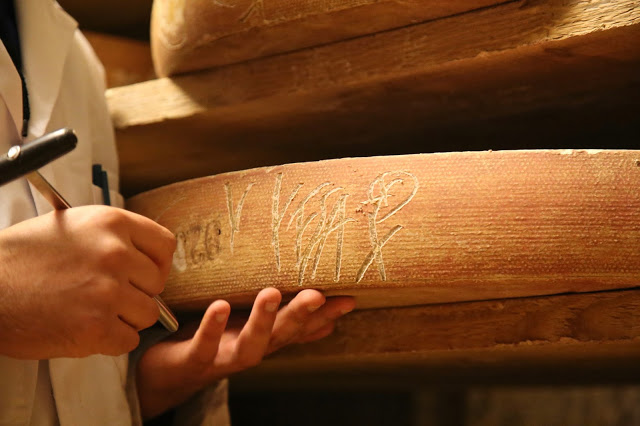 These ‘hieroglyphs’ scratched on the side of a wheel of Comté mean something to affineurs. 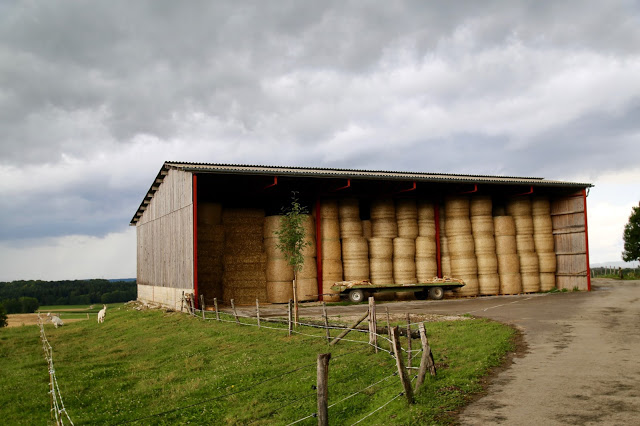 Everyone was bandying around this term, ‘hay’. Finally, I asked:

‘What actually IS hay?’

The country dwellers rolled their eyes. Hay is dried grass. Straw is dried grain stalks. So now I know.
Comté is the most popular cheese in France. Locals eat 30 kilos a year of the stuff.

France eats the most cheese in the world anyway, around 26 kilos a year per capita.

At the end of our visit to the Fort/cave we tasted a three year old Comté.

‘When a Comté is this good, you don’t cut it, you chip it,’ murmurs Tas.

The cheese is creamy, dense, nutty, long lasting with crystals. It’s a huge chunk but between the ten of us, we finish it. Comté is well matched with a Vin Jaune de Jura, an almost sherry-like wine. You can use younger Comté for cooking as it melts well.

Outside I take pictures of Tas with some Montbeliarde cows in the lane. He calls out to them, a strange sound, a kind of echoing sing-song:

‘Tas’ cows, they recognise the timbre of a voice. Tas doesn’t know these cows so Tas has to approach them carefully.’

He advances sideways, eventually inclining his head, tipping his leather hat towards them, letting them smell him. The brass bell around the cows neck clangs as the cow allows him to come near, it’s a gentle scene.

Back in the van, I sit in the front next to Sandra. 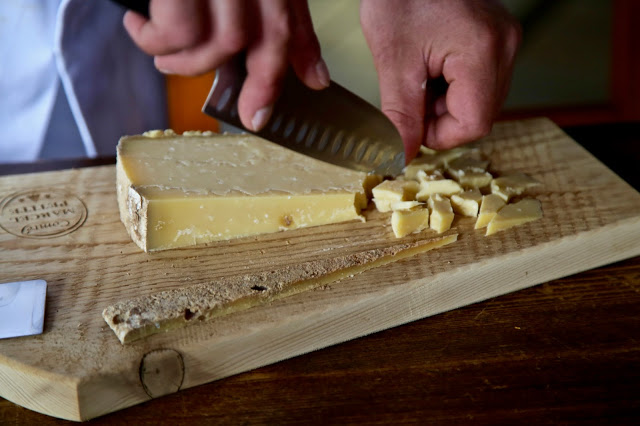 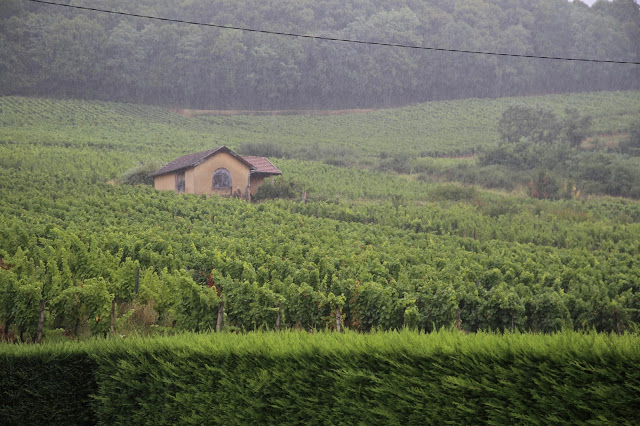 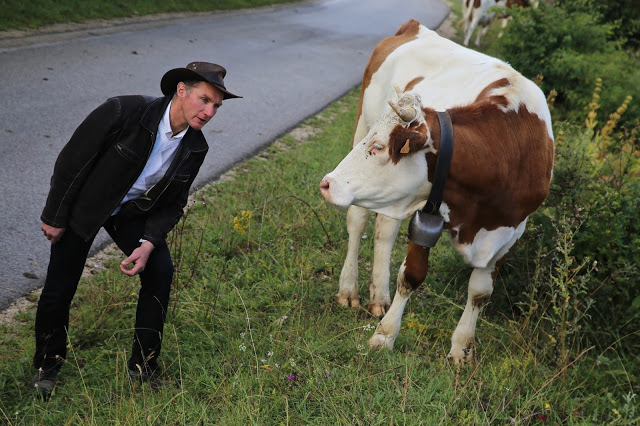 Previous Post: « Kilburn and the High Road: where to eat, drink and shop
Next Post: Knife making at Blenheim Forge »