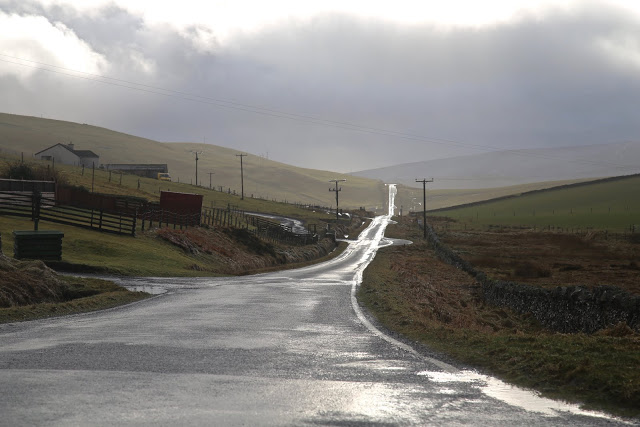 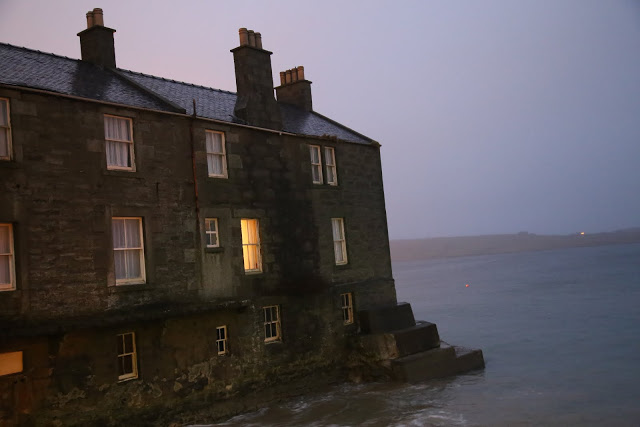 I arrive by way of a six hour stopover at Glasgow Airport (contents: one large pub) on a 20 seater plane to Sumburgh airport on the southern part of Shetland. On the plane they serve cups of tea and Tunnock’s caramel wafers.

I pick up the hire car and drive across the landing strip on the one road to Lerwick. Trying to find The Queen’s Hotel on Google Maps leads me to a bar populated by Eastern European sailors who point to a dark corner further away.

I’m directed down a tiny alleyway, where I eventually find The Queen’s hotel, a Dickensian structure built over the bay, waves lapping at the first floor windows. I park my car in the port car park, where I thought they told me to, having not yet attuned my ear to the Nordic flecked vowels. The next day I get a parking ticket.

‘Oh no, that’s sixty quid down the drain’

Then I have a good look at the ticket, which is bright yellow and tells me I wasn’t supposed to park there but there is no sum of money, no fine mentioned. It is just a written telling off.

‘It’s not London here,’ says my friend Elizabeth ‘Shetland is pretty laid back.’

My room is small with heavy curtains, dark carpet, a tiny dim wardrobe and a stonking hot towel radiator for drying wet clothes. The room feels like a turret in a lighthouse, surrounded by the roaring sea. From every window I can see the water, hear the waves crashing on the tiny beach adjacent. There is no chocolate on my pillow but there is a kettle and a couple of packs of Scottish shortbread biscuits. What more could you want?

Since 1876, Up Helly Aa occurs on the last Tuesday of every January, a few weeks after winter solstice, inspired by the Viking festival of Yule. The men and boys of Shetland who take part are called ‘Guizers’ derivative of the word ‘disguise’ and are divided into around 45 squads. The leader is called the Jarl, Swedish for ‘earl’.

Every year a different man wears the Guizer Jarl winged helmet. He has most likely been on the waiting list for 12 to 18 years for this once-in-a-lifetime moment. The outfits alone – chainmail, helmets, fur pelts, axes and shields – cost thousands. Participants save for years. Beard growing also commences years beforehand in order to have a properly hirsute and Viking-like brush. No women are allowed. Well, they can make the tea. Certainly refreshment is needed, it is a long day: the squads meet at dawn and carry on for at least 24 hours.

Early Tuesday morning, I bolt a bowl of hot porridge at The Queen’s Hotel and make my way through the sleeting rain to the British Legion Hall where the squads are gathering. Fortunately, I’d been advised to buy waterproofs from Cee and Jay’s shop the night before.

‘We sell tons of these every year during Up Helly Aa,’ said the owner gleefully, handing me a small pack of ladies trousers.

‘There is only two types of weather in Shetland,’ opined someone, ‘high cloud and low cloud. For this Up Helly Aa, it’s going to be low cloud.’

I’d also purchased a viking woolly hat complete with knitted horns from the Peerie Shop on the front. 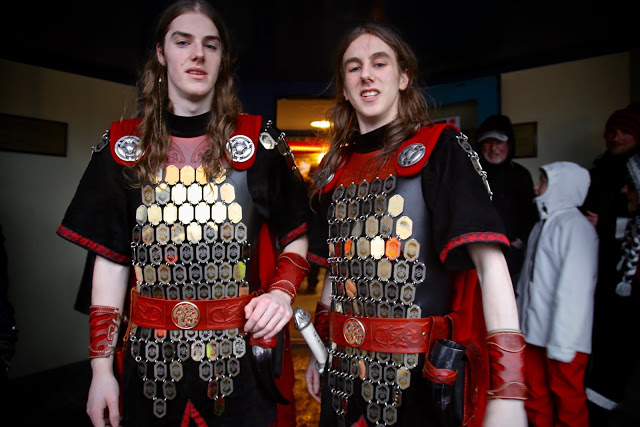 I shoulder my way through vikings crowding the doorway to find a roomful of bristly men polishing their helmets and drinking. My camera lens steams up. It is as wet inside as out.

The men lift themselves and their armour, don headgear and file out roaring. I squeeze through to the front of the column, along with a group of other photographers. My camera viewfinder is difficult to see through.

‘This rain!’ I puff to another photographer. It is raining horizontally.

‘Oh this is good weather this year,’ he grins while I gawp at him. ‘One year we had to move the galley as the wind was so strong it would have blown out to sea’.

The parade starts. The Guizer Jarl waves his axe in the air and bellows. His squad boom back in response. Every few minutes the photographers kneel down and take a picture as the squads move forward. Then you’d be asked, no, told, to move along. I rise, creaking with damp joints, and scamper backwards to the next spot where I can take a picture. This continues for a couple of miles. At one point the Guizer Jarl stops for a photo opportunity with a man dressed up as a can of Tennents lager. 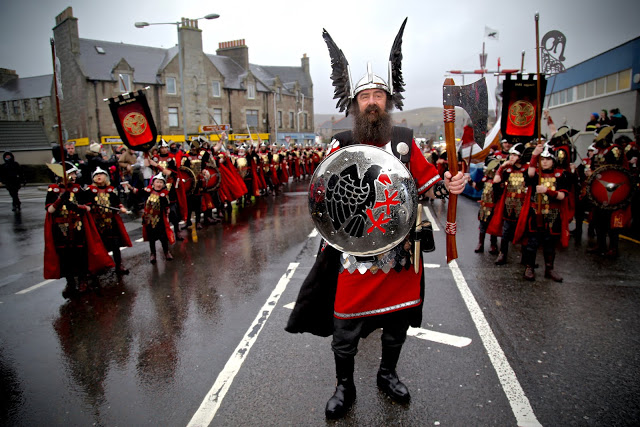 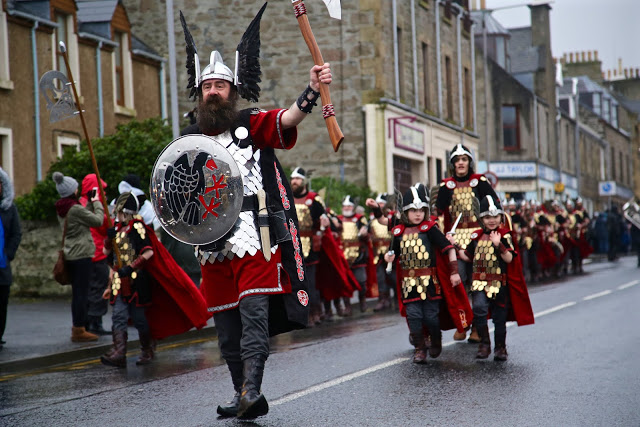 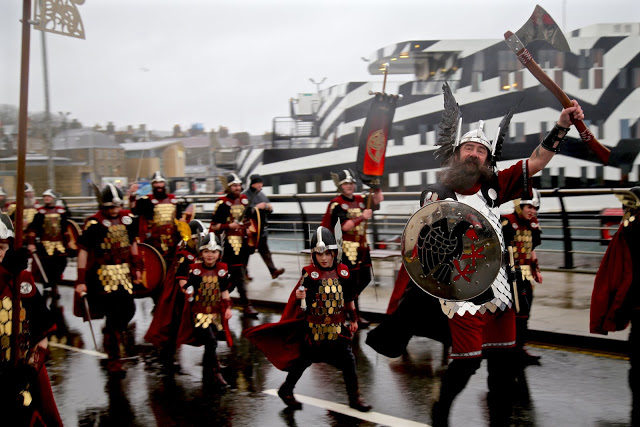 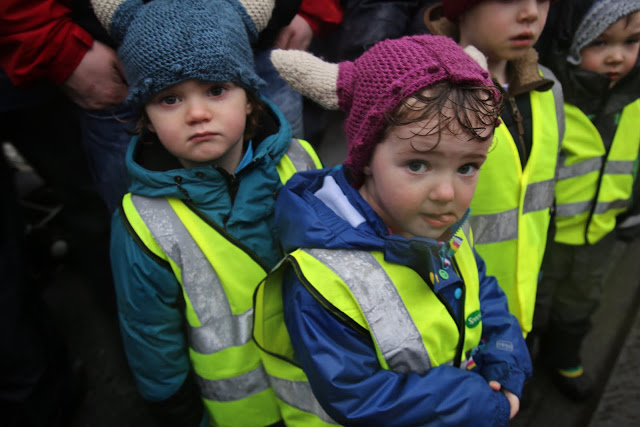 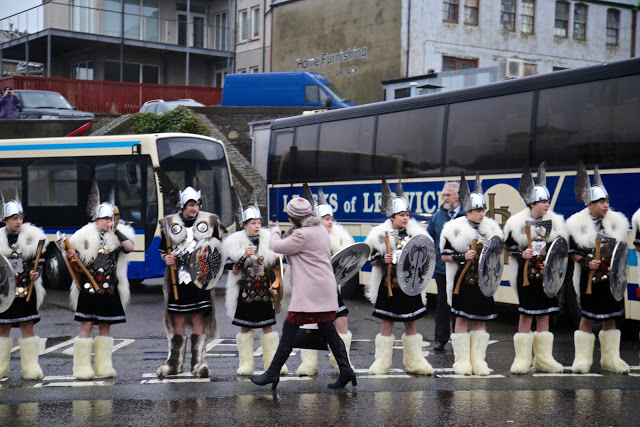 When we reach the town hall, everyone rushes up the wooden stairs.

‘This is a private event now’ intones one man barring the way. ‘There will be singing and whisky upstairs’.

I don’t want to miss this clearly essential part of the day so I blag my way into the grand hall which has a domed wooden ceiling rather like an upside-down boat, just in time for the whisky toast.

I try to take pictures but now my digital camera has mist inside the lens and the lights on the dashboard are blinking on and off. These all-electronic cameras don’t like the rain. I sit damply on a seat munching on free sandwiches while the mayor talks about Lerwick having the ‘Axe Factor’. 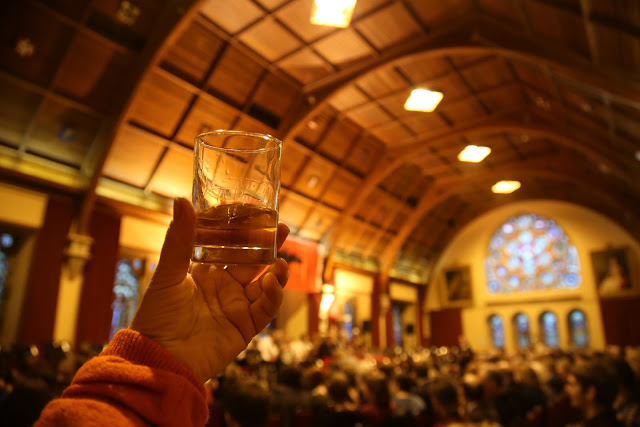 A bit more singing, repeated topping up of glasses and the squads file out – they are going to spend the afternoon touring the schools of Lerwick.
I squelch back to my hotel passing by the camera shop with my non-functioning camera. The owner points to a half empty box with special lens hoods for £8.95.

‘That box was full this morning,’ he says proudly. I buy one. It’s basically a plastic bag with a sleeve for the lens.

I later find out that TV camera crews send their equipment for annual servicing after Up Helly Aa. Now I understand why many of them are cloaked by a large black plastic garden sack.
In my hotel room the internet is down, I can’t send any pictures. Chilled to the bone and sodden, I get into bed even though it’s the middle of the afternoon. I have an early dinner (5.30pm!) in the Lodberries dining room, of tomato soup, fish and chips, plus excellent apple crumble with hot custard. There is something very comforting about Shetland. Some people say it is like going back to the 1970s but it feels more like going to visit your nan. And nobody makes soup like they do here. Soup makes sense in Shetland.

I speak to a lady about the galley-burning ceremony of that evening:

‘Don’t wear your best coat. If someone starts patting you down don’t be alarmed, they are putting you out. Watch out for embers!’

I’ve only brought one coat.
That evening, I walk to the playground next to the town hall. I have to make a choice: see the torchlit parade or take pictures of the burning galleon, there is no way I can photograph both. I decide to wait for the galley, positioning myself as close as possible. I see the trains of glowing torches trooping across the park, drums beating, bagpipes and brass, the songs and cries of the viking hordes. It stirs the blood. 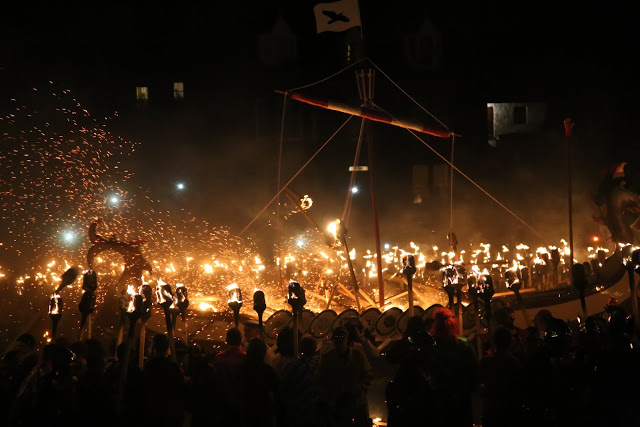 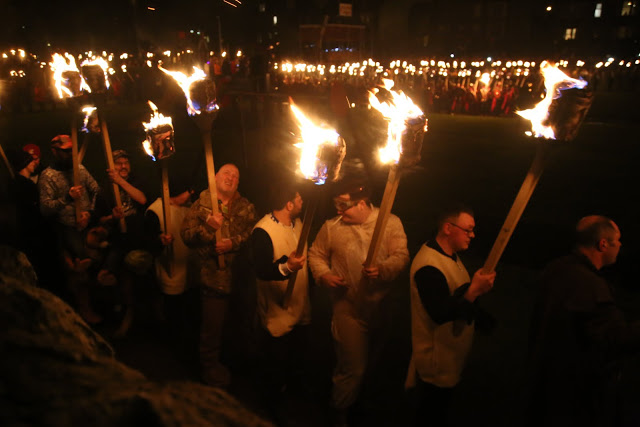 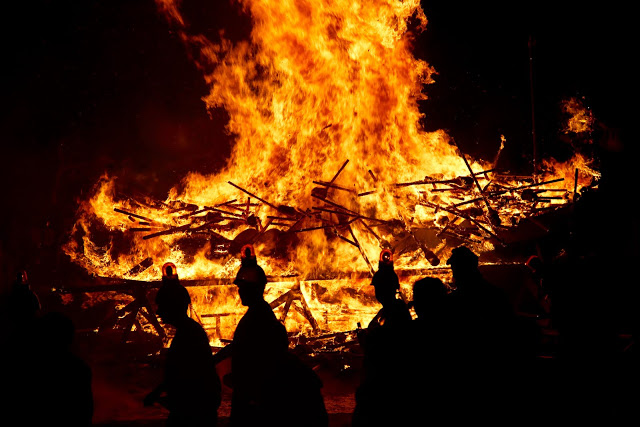 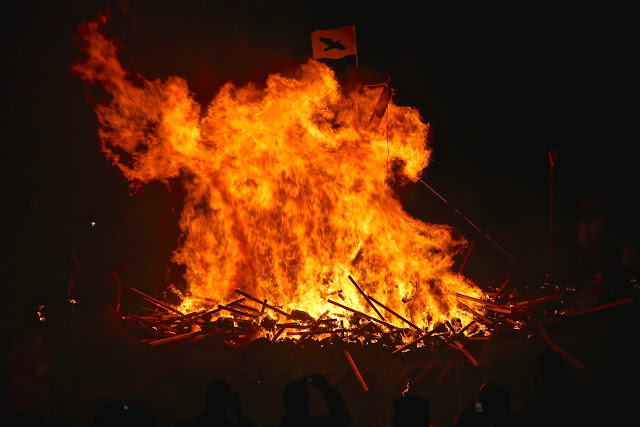 As the parade finally swarms into the play park to the galleon, I can see that many of the ‘Vikings’ are wearing women’s dresses. I recall my friend Elizabeth wryly mentioning:

‘This is also called Transvestite Tuesday‘.

Sparks fill the heavens, the drizzle has stopped but the sky is raining fire. Fiery torches circle the wooden galley in the middle. At that instant everybody lobs their torches into the boat- a thousand flying flaming flares arc through the darkness into the timbered ship, which soon catches fire. The yelps, yowls and shield-shaking grow louder, more jubilant. The air smells of gunpowder and sea salt, for an Englishwoman it prompts thoughts of Guy Fawkes night and Mardi Gras. The longship collapses in a blaze of yellow, silhouetted against the arctic-black starlit sky.

The night is just beginning. Friends have obtained tickets for the halls- no easy task for these tend to be reserved for islanders only. There are 11 halls around Lerwick and the squads tour these establishments with a short song and dance act, often satirical or based on Shetland in-jokes. These mini cabarets last all night, occurring every half hour until the main Jarl squad arrive around 8 am in the morning. 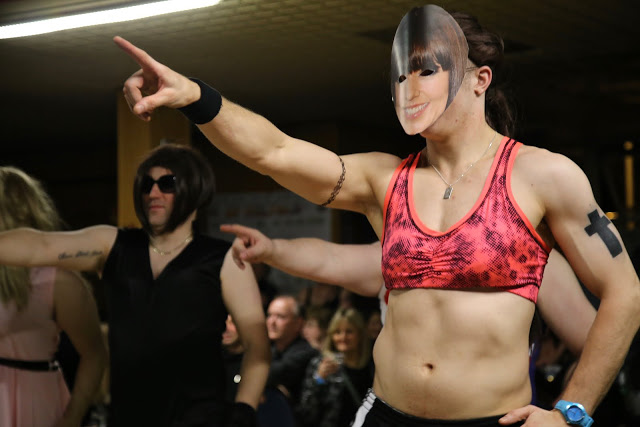 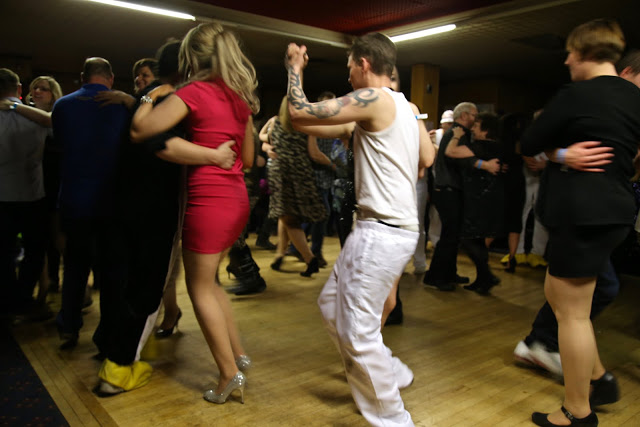 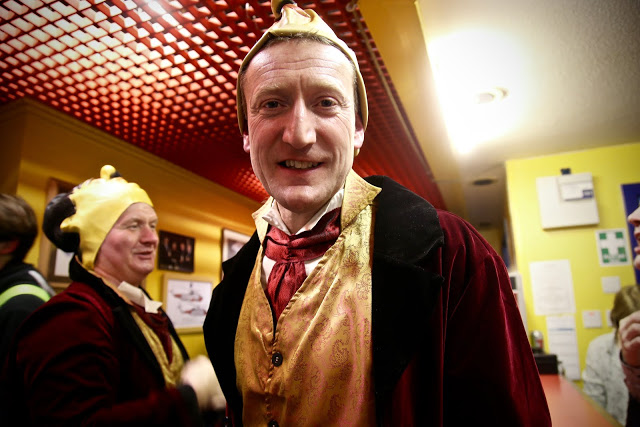 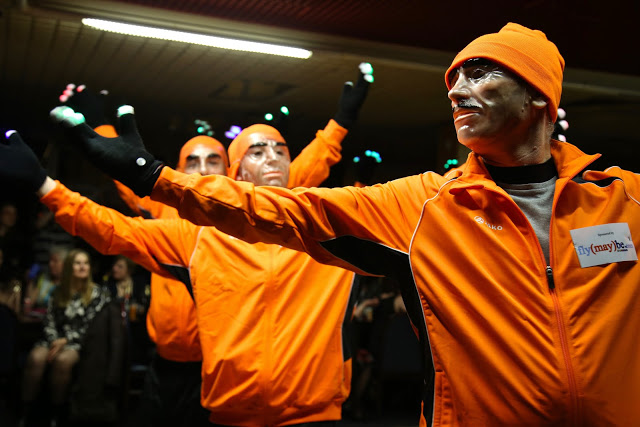 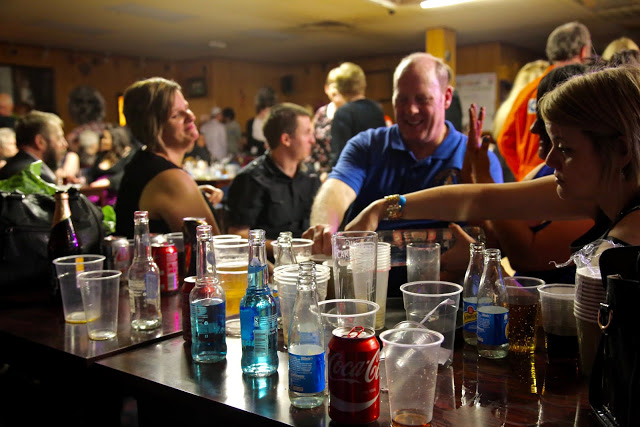 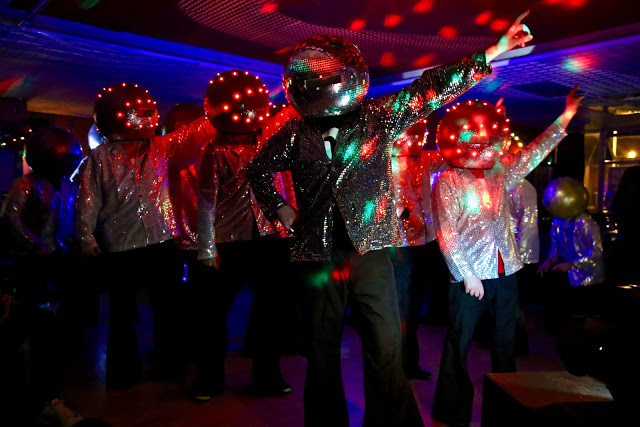 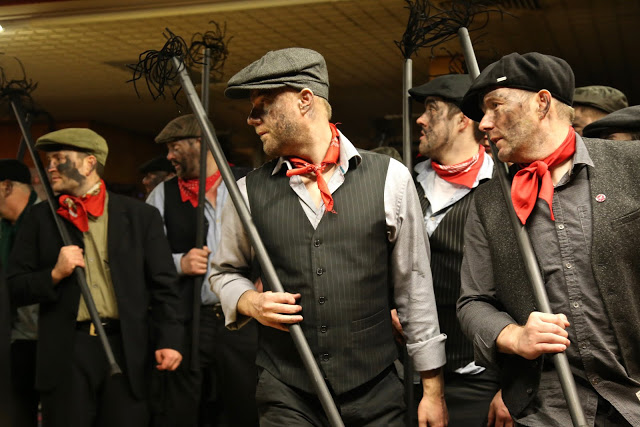 Our hall is at the British Legion again. Ladies sit in their best frocks supping pints around the dance floor. A house band with a Filippino singer plays pop classics. Moments after entering, I meet the Shetland SMP dressed as Laurel or Hardy, I’m not sure which.

I see a group of men dressed up as hunters and bears, men cavorting as the Spice Girls (why is it always the burliest that plays Ginger Spice?), and a skit about the island’s airline Fly(May)Be.

As I drink, as the troops come through doing their act, it starts to feel quite trippy, like dropping a tab in the Highlands. I last until 5am.

The next day, I am useless. I stagger down to breakfast at 11.30am, have a bowl of porridge then crash back into bed. There I remain, hand on forehead, half-asleep until evening dinner.

‘That’s a reet Up Helly Aa du a hed then,’ says the receptionist at The Queens. ‘Everybody is leathered for days. It’s bigger than Christmas. Nobody gets any work done so it’s an Island holiday. Even the schools are shut.’ 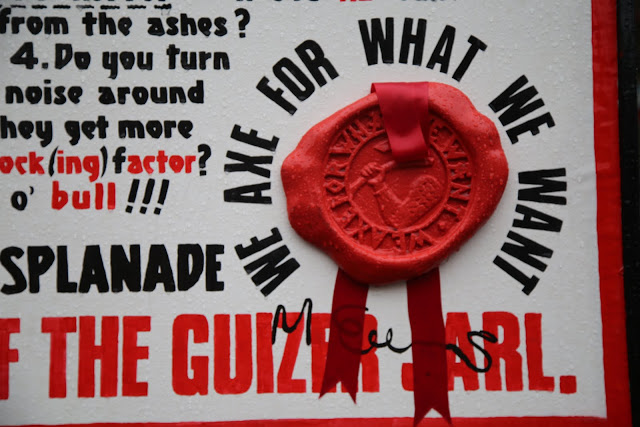 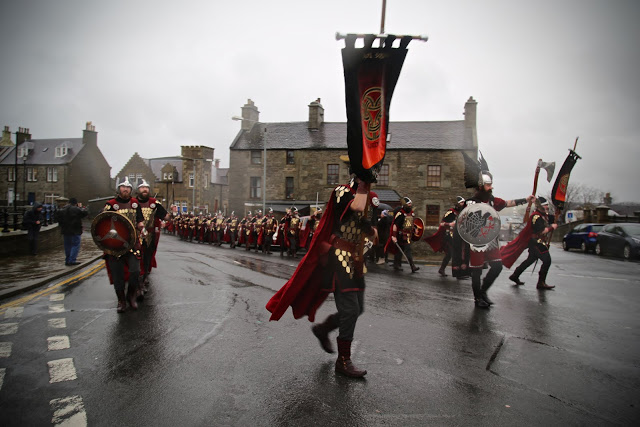 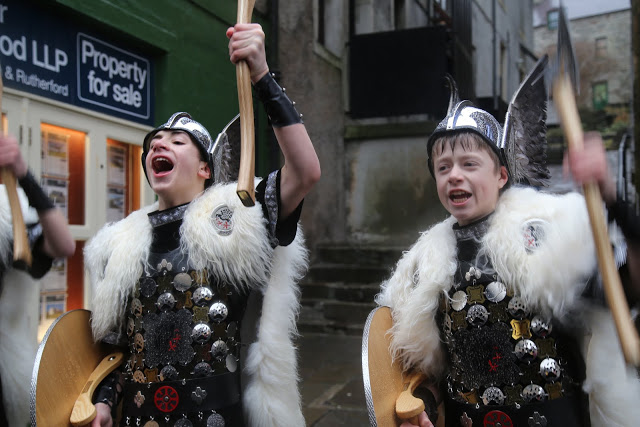 This account is from 2016 when I visited Shetland courtesy of Promote Shetland.