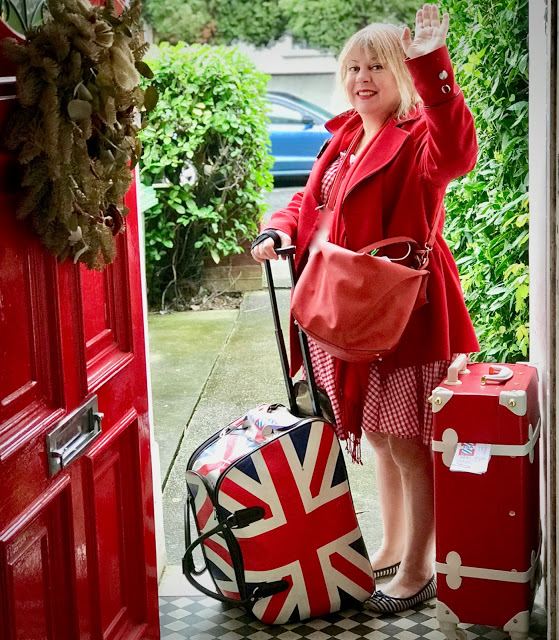 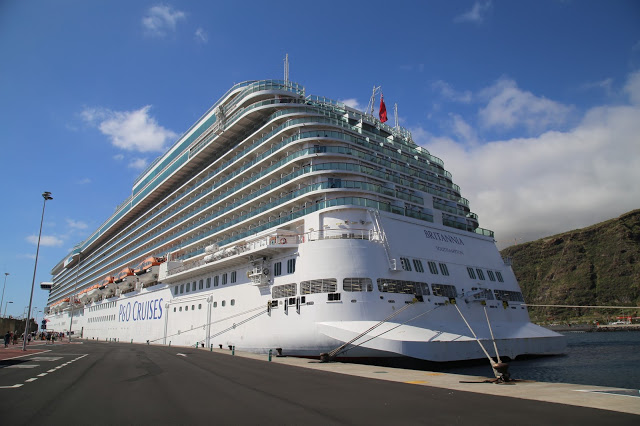 It’s perhaps a myth that the word ‘posh’ comes from having a cabin Port Out, Starboard Home (meaning you are always on the shady side, a plus when going to India) but I’m feeling very spoilt on this P and O culinary cruise. My cabin is on A deck, level 15 at the top of the ship and it has a balcony.

Britannia is the largest ship in the fleet with nearly 4,000 passengers and 1,300 staff. The average age of people on this ship is 75, most are couples. Being with older people has the positive effect of making you feel very youthful. During the summer and school holidays, there are more families.

The ship itself is beautiful, gleaming white, its prow slashed with the blue and red of the Union Jack.  You feel a swell of British pride when emerging from it at ports. 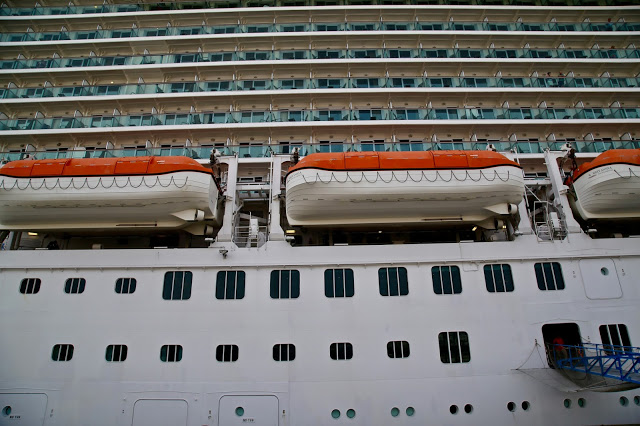 On the first day, some of the crew were showing passengers how sailors used to navigate, using the stars, maps and sextants. Today they use computers but in case of an emergency they still need to know the old fashioned way.
I was shown the emergency supplies in case the ship sunk: around 250ml of water in plastic bubble packs of 5oml and a dense tasteless shortbread, for each passenger.

The passenger lifeboats have a hard shell roof, they can turn over in rough seas and are self-righting.

‘I bet that leads to quite a bit of vomiting,’ I suggested to the seaman.

‘We give everyone a sea sickness pill as they enter,’ he chuckled.

The crew use a normal open rubber dingy.
On my cruise, eight people were removed for reasons of ill health. I think some of them died, although this was kept hush-hush. Every cruise ship has a morgue for this reason and seeing the age of the passengers, this makes sense. There is also a mini-hospital on board with an X Ray machine, doctors and nurses.
One night I was woken by the sound of a helicopter, a ‘medivac’ on the roof. For one thrilling but dreadful moment, I thought somebody had gone overboard. Search lights were scanning the waves. Several times the ship had to change course to deliver sick passengers to the nearest port. 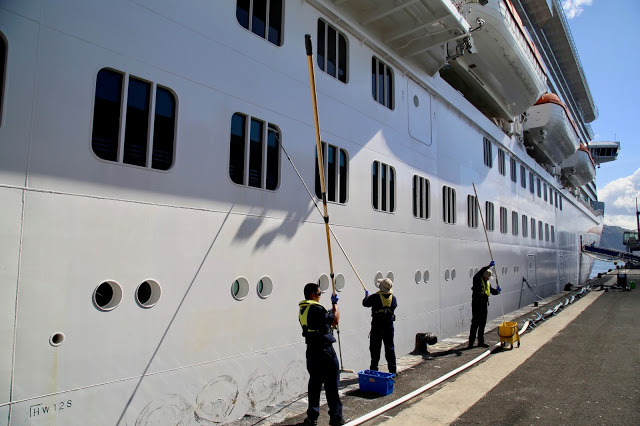 This is an all-inclusive holiday, and prices are very reasonable, between £700 and £1,000 per person for 14 days. However you do have to pay extra for alcohol, spa, excursions, internet access, the special restaurants, soft drink, coffee and ice cream packages. 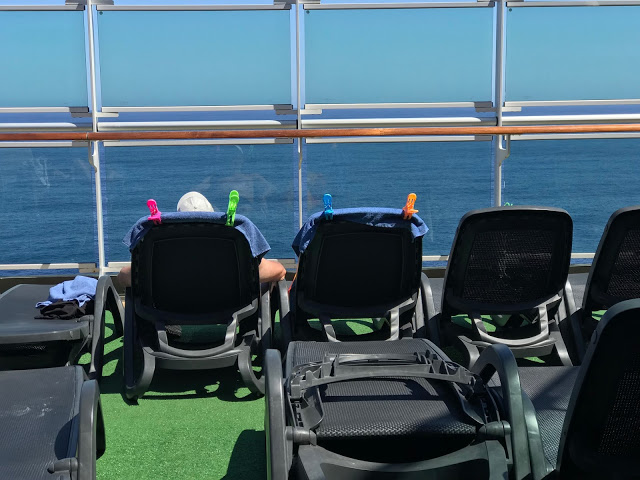 The twin cabin is the size of a large caravan, with a powerful shower and incredibly comfortable beds, a kettle and a fridge. Best of all is the balcony. There’s nothing like sipping on coffee while sat in the sunshine, watching the ocean. When leaving Madeira, we even saw dolphins skipping in the waves.

Down on deck 5, there is the Atrium which has a crystal waterfall chandelier, stretching up three decks. Below the Captain is addressing everyone on Black Tie Night. 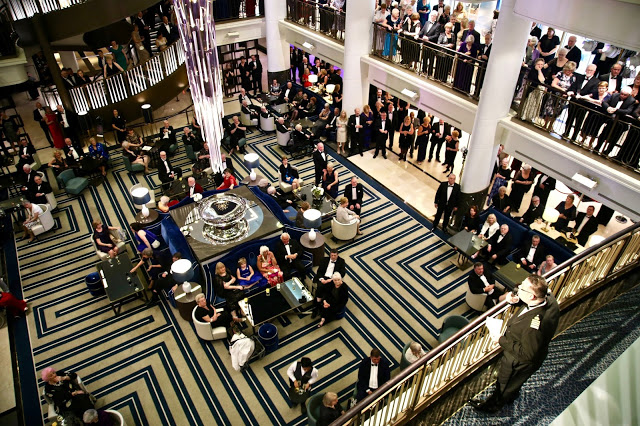 Every cruise is terrified of the dreaded Norovirus. You are encouraged to wash your hands frequently and use a paper towel to open toilet doors.

To cook on a ship this size for this many people is no easy task. There are no open flames, containers are metal as they aren’t breakable and jugs, saucepans, fryers must not be overfilled – imagine if it’s a rough crossing! (They even empty the swimming pools on the top deck when the sea is stormy. Otherwise the water just sloshes out.)

Out of almost 200 chefs on board, there are only 3 or 4 women, and they are in the pastry section.

‘It’s too rough for them,’ justified one chef. ‘It’s really long hours, hot, cramped and you have to lift heavy pans.’

The last night of the cruise, all the chefs and waiters did a kind of victory parade, while the diners applauded, it was very sweet. 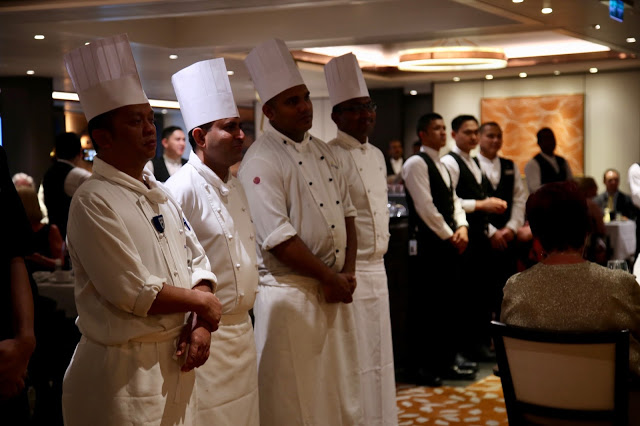 Britannia has two restaurants on lower decks with silver service sittings at 6.30 and 8.30pm and the open-all-hours buffet on the top deck. I choose ‘freedom dining’ option, which means I don’t have a fixed sitting and can dine where I want.
You have to control yourself at the buffet. I tried to prevent myself from doing the typical, try a little bit of everything, but mostly failed. In the end I just ate huge piles of salad and compensated with a carb offload of pudding. I’d generally eat around five desserts a day.
Meals and the buffet are often themed: Italian night, Asian flavours, etc. 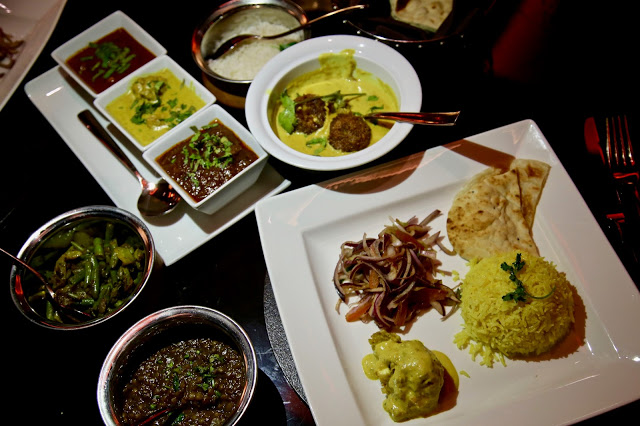 One chef explained that the food is cooked for the average British (and elderly) palate, so not too much salt or spice. In the Indian restaurant, Sindhu, you can request more authentic spicing.

The menu, designed by executive chef Atul Kochar, was a nice change from the usual restaurants on board. 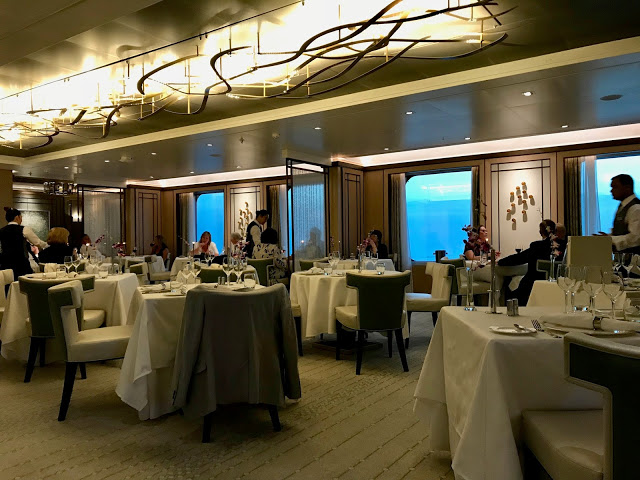 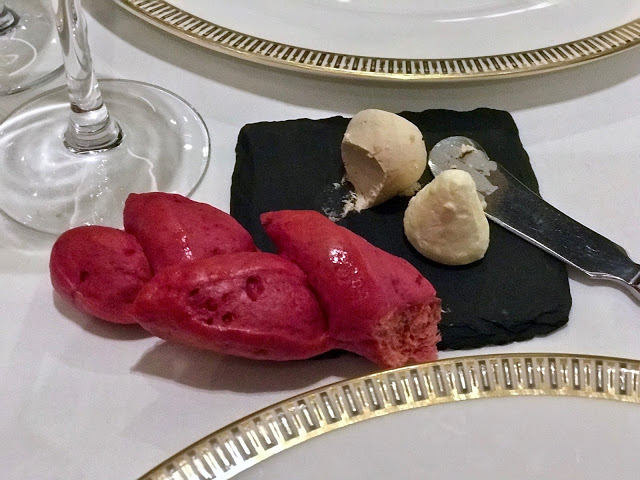 The food here is of a gourmet standard, with a wine list chosen by TV wine guru Olly Smith. Definitely worth booking here for an occasion. We also had afternoon tea, designed by Eric Lanlard. 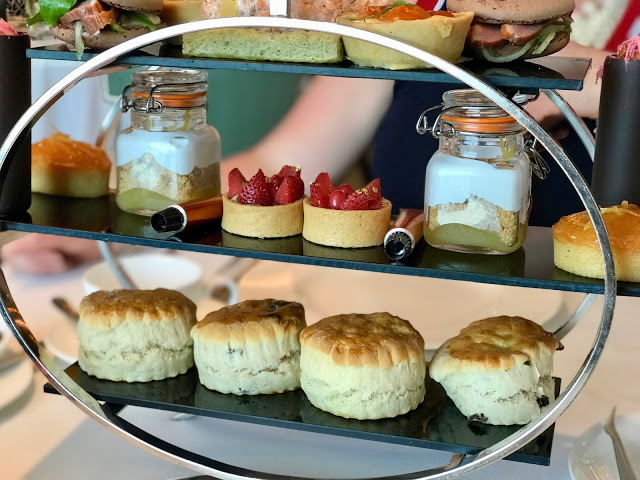 Most of the ship crew is Indian or Philipino: the Indians are soft-spoken while the Philippinos are smiley and almost overly attentive. In the dining room, you have the choice of eating alone or sharing a table with others, a bit like a supper club.

Staff frequently expressed surprise that I was on my own (apart from the few days I spent with my sister who joined in Madeira and left from Lisbon). I preferred to be on my own, eating while reading a book, which I love. I like some solitude when I’m travelling. Waiters would whisper the title of my book as they passed, I’d hear snatches like:

Then, approaching me: ‘This book, what is it about?’

‘It’s a book by Jon Ronson, a book of short stories.’

‘Ah yes I’ve heard of him,’ the waiter said.

I sort of didn’t believe him. Is Ronson big in India?

You are expected to tip the cabin steward and this is added to your bill. There is no cash on board, you have a ‘cruise card’, which is logged with your credit card.

Our cabin steward or butler, Sujit, appeared to live in the corridor. Every time we emerged from the cabin, he’d spring from behind his trolley, waving hello. Mind, at the end of the trip, when I asked him to help me carry my voluminous baggage, 50 yards to the lifts, he snapped ‘Sorry madam, I’m very busy’. Oh well. 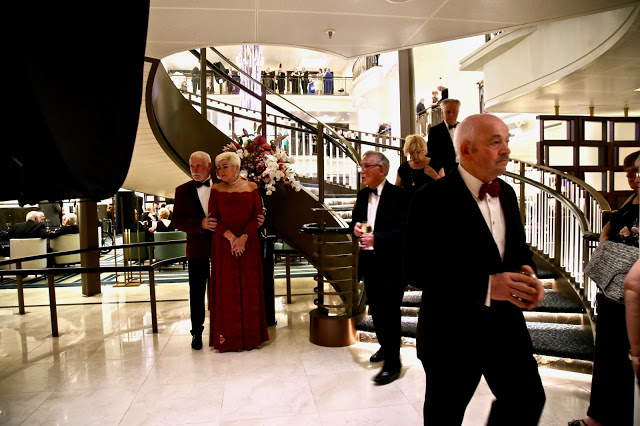 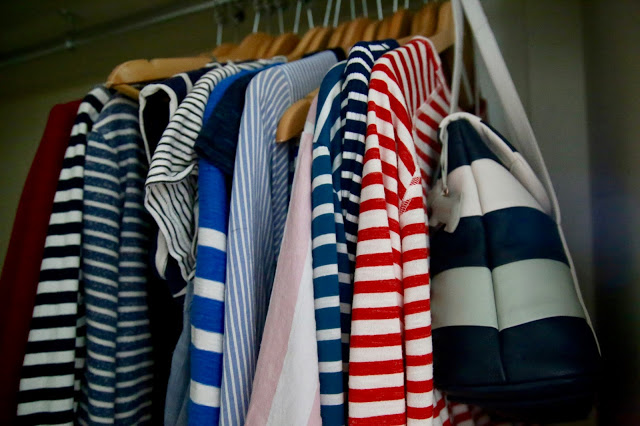 I packed a nautical wardrobe. I soon realised, so did everyone else. Stripes everywhere.

A Facebook friend advised, when she found out I was going on a cruise:

I saw what she meant on the first Black Tie Night. Those oldsters certainly know how to put on a show: the men looked so handsome in crisp white shirts with pleated fronts, bow ties, dinner jackets, all elderly James Bonds. The women had their hair blow dried, folded into chignons, teased and flicked; the jewels were out on display, earrings, rings, necklaces even armbands of diamonds; satin heels and glinting dresses, silk clutch bags. Pashminas came into their own. I felt underdressed. 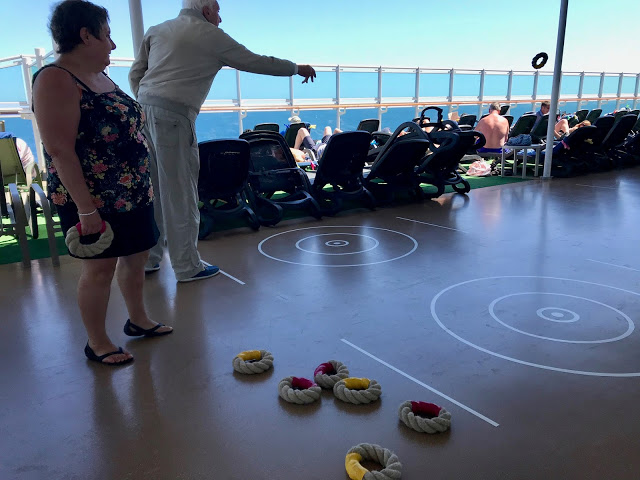 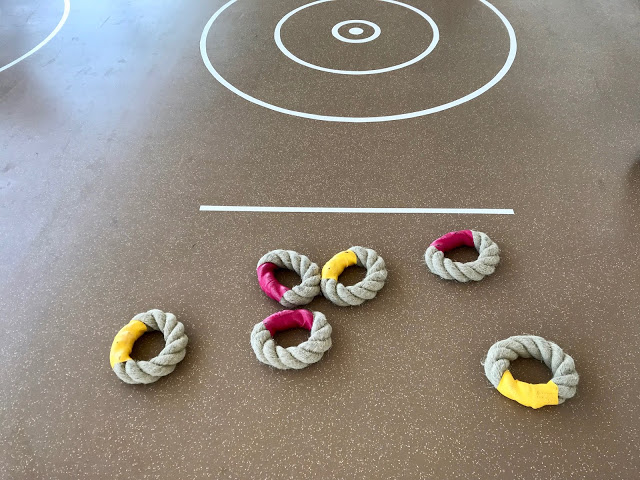 All of landlubbing life is recreated on board: nightly theatre, pubs, casinos, quizzes, workshops ‘make your own corsage’, talks ‘nutritional eating’, gym and stretch classes.

Cruise ship entertainment often doesn’t have a very good reputation but the point is, there is lots of it. I saw the ventriloquist who, I’ll be frank, I didn’t quite ‘get’. The audience, however, were (literally) pissing themselves. I glanced around bewildered at the uproarious laughter.

I missed Sam Bailey, X Factor winner, which I regret. It’s the sort of thing I’d never pay for on land so I should have made the effort. I heard good things about the ‘Barry from Eastenders’ set.

I ended up not attending 11am line dancing but went to watch the nightly ballroom dancing. Very impressive, a whole culture by itself. 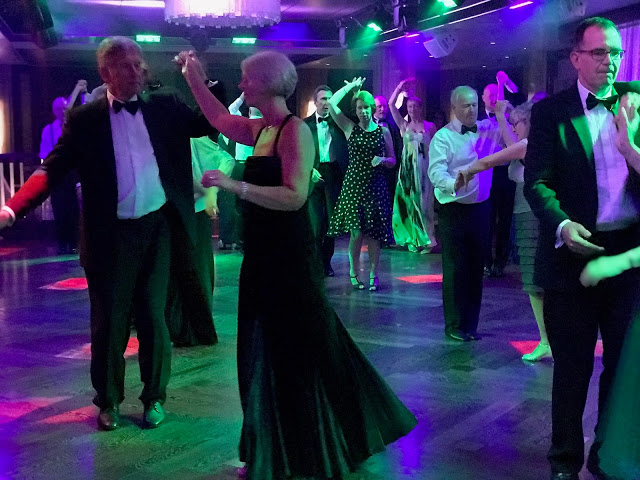 I’m more of a quiz person and participated most nights in the syndicate quiz, which got quite heated at some points. Ferocious players all.

Deck ‘quoits’ is a traditional game on long cruises, in which players throw coils of rope. I also enjoyed hanging out in the library wing-tipped armchairs on rainy days. This lies next to the ‘crow’s nest’ bar at the fore of the ship, where people would spend all day looking at the horizon, the hynoptic lure of the sea.

I joined the choir, pictured below, at their final performance. 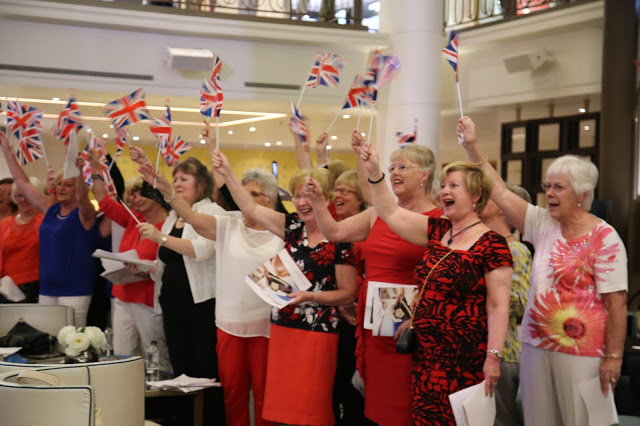 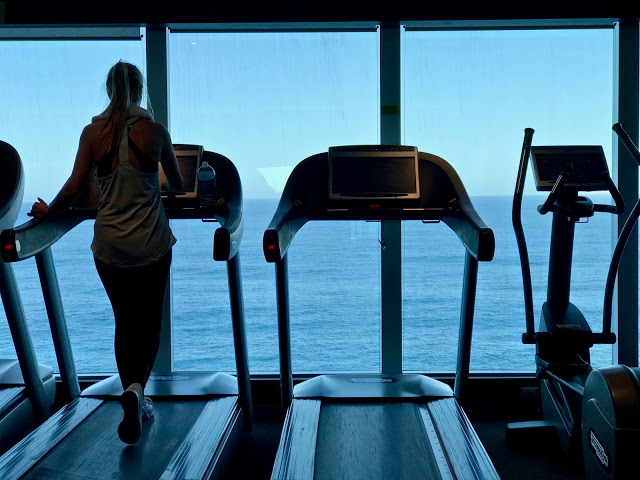 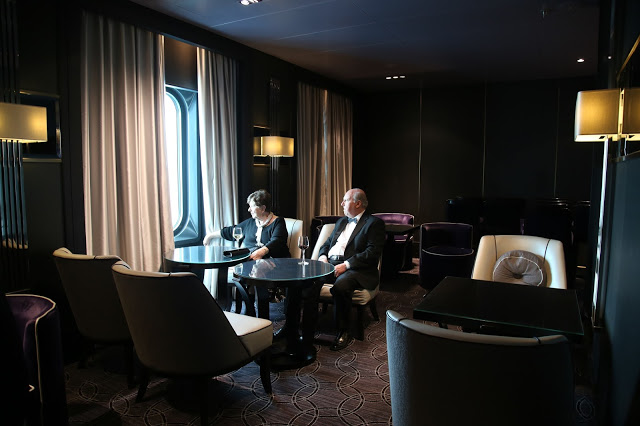 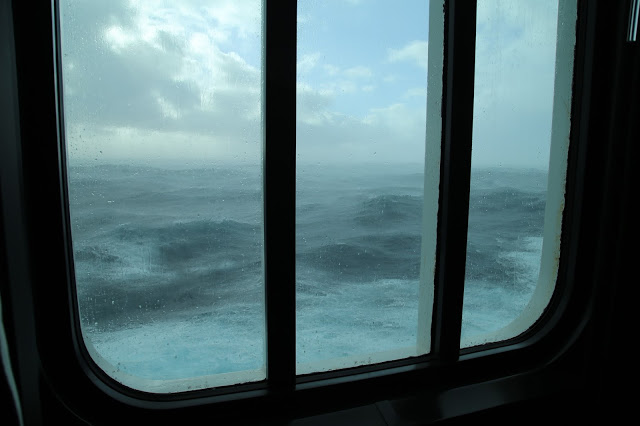 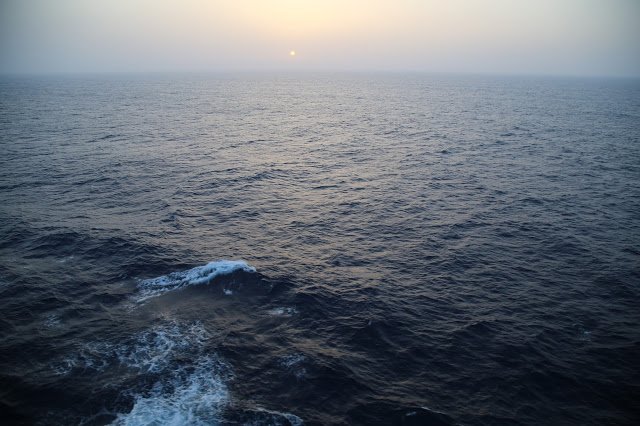 The best thing during this cruise was of course the ocean itself, which I could see from my cabin balcony. I’d even get up frequently in the night just to see what was happening past the balcony: was the sea rough? Did it have creamy meringue peaks? Was it turquoise and shiny flat? Was it foggy and choppy?
A cruise is a chance to view a pleasurably relentless succession of sunrises and sunsets, each as individual as a person’s face. I slept with the door open, rocking in my bed, breathing in the mineral air, the salt, the smell of the Atlantic.

It’s never boring: the sea, a liquid epidermis wrapped around this knobbly rock, the Earth, held in place by gravity. 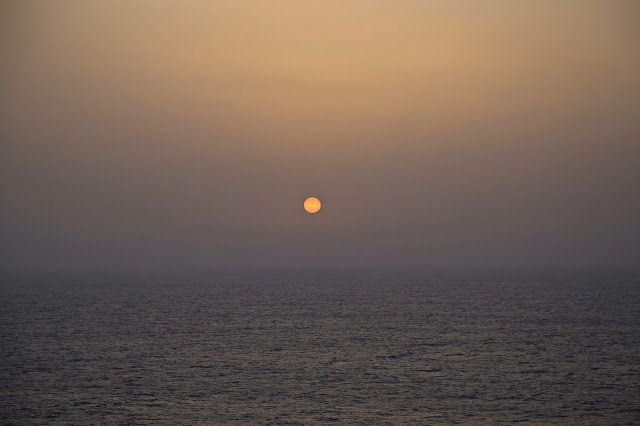 I was invited by P and O cruises for a 14 night cruise to Madeira, the Canary Islands, Lisbon, from Southampton. 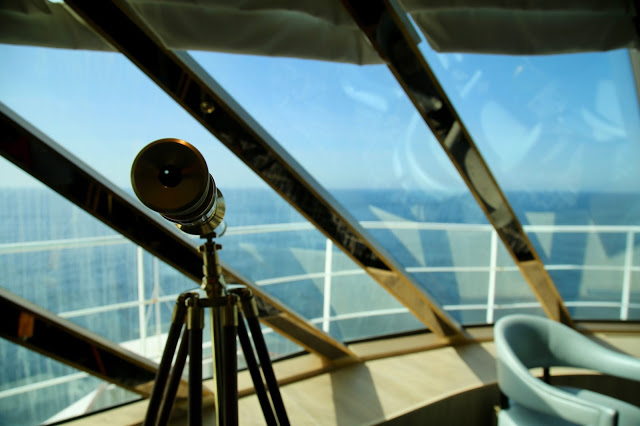 In my next posts, I will discuss each island stop and my day with Eric Lanlard.