Much of food TV, food writing and of course, food blogging, is aspirational, part of a ‘lifestyle’: female chefs on TV are always young, slim and unsweaty, food writing is often about rare and expensive ingredients and time-consuming methods, while food blogging can be so twee. Who ties up their freshly-made cookies with ribbon? Who always drinks from a retro paper striped straw? As a self-confessed food geek, I’m always trying hard-core DIY recipes so I plead guilty to the second sin. And I am sometimes prone to the third vice, of prettying up my food photography and recipes, unlikely to be replicated by the average, home tired-from-work cook.
But at the other end of the scale from all this ‘lifestyle’ cookery, are the people whose diet is so limited as to be dreary, but they have no choice. I’ve been working with Vital Arts to create vibrant tasty recipes for renal patients, people on dialysis.
Dialysis is a full-time job; people with kidney failure must go in to the renal ward for five hours, three times a week. Work is difficult and holidays are virtually impossible. The patients are tired all the time. Dialysis, while keeping them alive, is exhausting: you have all your blood taken out, cleaned and put back in. During the process, you feel at your most vulnerable, the life blood is literally being drained out of you. Most renal patients have diabetes. The diabetes explosion in the West will inevitably lead to a surge in demand for dialysis a few years down the line.
There aren’t enough kidneys for transplant. Immediately after my visit, I signed up online to donate my organs. Do it.
Most of the patients on the dialysis ward at the Royal London Hospital, the largest in Europe, are from ethnic minorities: African, Caribbean and from the Indian sub-continent. One of the reasons for this is that there are less donated organs from ethnic minorities and cross-racial organ donation often don’t match for both blood and tissue types.  Ethnic minorities wait longer for organ donation and spend longer, often years, on dialysis.
The renal diet is very restrictive. No potassium, no salt, and about half a litre of liquid a day, including all the liquid they have in their food. Sufferers are reduced to sucking ice cubes to allay thirst. Their kidneys have shut down and they cannot process the excess liquid. No potassium means for instance, no bananas, no yams, few nuts, few tomatoes, a tiny amount of coconut milk. Potatoes must be boiled and drained then cooked again, to rid them of potassium. And imagine a life without salt. In addition, the fact that most renal patients are diabetic means that they must restrict sugar, fruit and carbs in their diet as well as fat: double whammy.
The people on the ward tend to go in for dialysis with the same people, on the same shift, every week, so they get to know each other really well. They develop close relationships, especially those that are picked up and dropped off by NHS bus, spending three days a week with each other. One of the favourite topics of conversation is food, so Vital Arts asked me to create some recipe cards of dishes that they could eat. The official NHS diet sheets tend to feature British food; in fact the over-boiled, bland food that the British have been trying to move away from, is exactly what a renal patient should be eating. But as dialysis patients come from different cultures, they want more inspirational recipes, dishes they can salivate over. At the same time the recipes should be fairly simple, for people on dialysis have little energy to cook.
I went along to chat to some patients about the food they like and came up with three recipes. Vegetables and fruit are a problem for people on dialysis, they contain too much fluid. Therefore it is easier to have a protein based, meat diet. So one of the recipes is a chicken recipe, which has been tested. It’s the only meat recipe I’ve ever included on this blog.
Finally there was an excellent recipe given by a lady of Nigerian origin, a yam chips and tomato stew: she convincingly told us that her Nigerian diet was fine for people on dialysis. But the NHS dieticians said no, it was far too high in potassium. All of the below recipes were checked by the NHS dieticians, I was told to use less oil, less olives, to boil vegetables then drain the water away before using them.
Shamim’s Chicken Tagine with ras el hanout 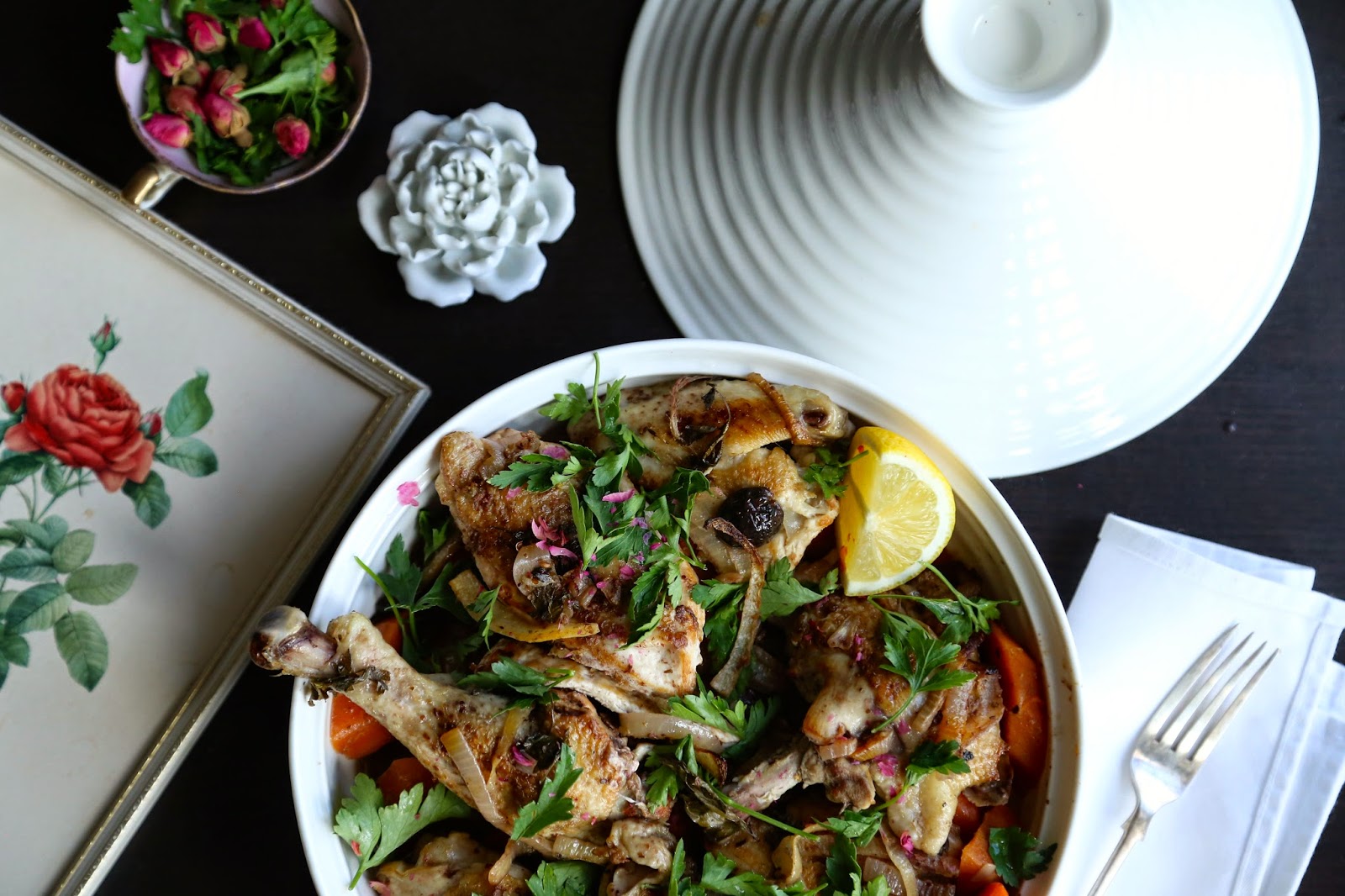 Shamim, 54, is originally from Pakistan. She’s been in the UK for 35 years. Her husband has his own business selling gear boxes for cars and Shamim used to work for him. She has been on dialysis for one year now. Her daughter and her daughter-in-law, from Dubai, cook for her but are careful to comply with her diet.
This is a recipe from her daughter-in-law. It’s spectacular, a feast for a family and uses a North African cooking pot called a tagine. This is shaped like a cone, condensation runs up the insides and back down into the food. If you don’t have one, you can use a shallow casserole dish with a lid or, as many modern North Africans use, a pressure cooker.

Garnish with fresh parsley and or dried rose petals

Method for the tagine:

Garnish with parsley and rose petals. Serve with couscous. 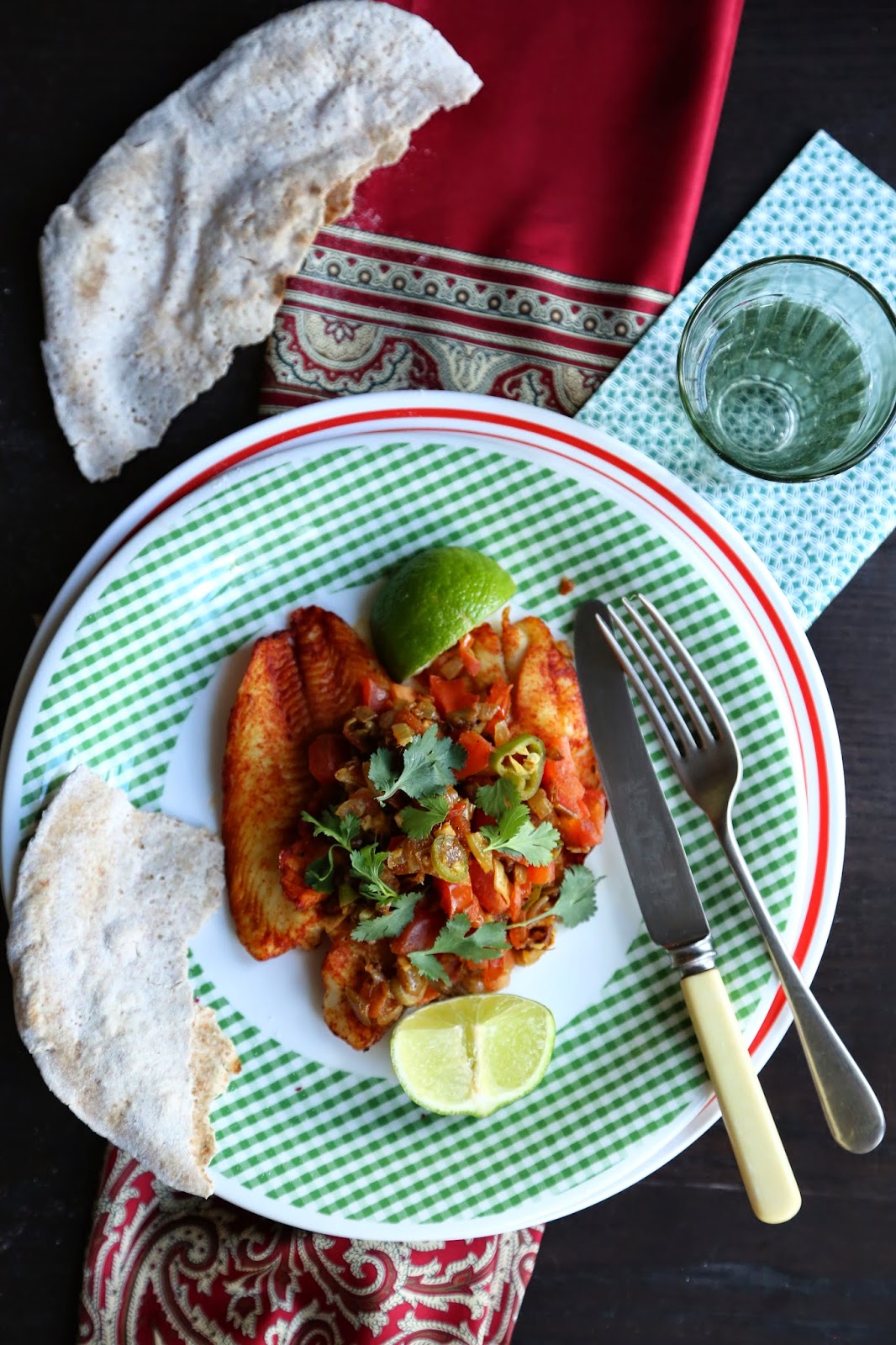 Selina is 48,
originally from Chitagarh in Bangladesh. She has been on dialysis for just over a year. She’s been in the UK for 25 years, coming here as a 15 year old with her
sister. Her sister died ten years ago. She’s done several jobs while in the UK,
worked in a shoe shop, in sweet shops and in a dry cleaners. She is helped by
an English gentleman, a pensioner from the East End, who sometimes accompanies
her to hospital for her dialysis, and cooks for her. He cooks typically English
food which is rather bland, but good for a renal diet. But this is a favourite
dish of hers, from her country.
Serves 2
1 tbsp sunflower or olive oil or mustard oil
1 tbsp of turmeric powder
400g of tilapia fillets, washed and patted dry
with kitchen paper
1 tbsp of vegetable oil
A pinch of red chilli powder (optional)
1 bay leaf
4 green cardamom pods, crushed
1 tsp of cumin seeds
2 cloves garlic, minced
1 brown onion, finely diced
1 whole green chilli, deseeded, sliced thinly
1 thumb of fresh ginger, peeled and finely
chopped
1 tsp of ground coriander
1 tsp of ground cumin
1/2 tsp of turmeric powder
2 tomatoes, chopped finely
a handful of fresh coriander leaves, picked
from their stems
Juice of half a lime.
Rub the turmeric powder and oil over the fish fillets
and leave to marinate for ten minutes. Pre-heat the grill and grill the tilapia fillets until golden on each side. Handle them gently
as you do not want the fillets to break up. Once cooked, lift out the fillets
and set aside.
In a frying pan, fry the oil, red chilli powder if using,
the bay leaf, green cardamom, and cumin seeds.
Add the garlic, onion, ginger and green chilli
then add the ground coriander, ground cumin and turmeric powder.
Stir on a medium heat for five or so
minutes, then add the tomatoes. Cook for another five to ten minutes then add
the tilapia fillets. These should take around five or so minutes to cook.
Garnish with coriander and a squeeze of lime.
Serve with chapatti.
Kalla’s Kiri Hodi 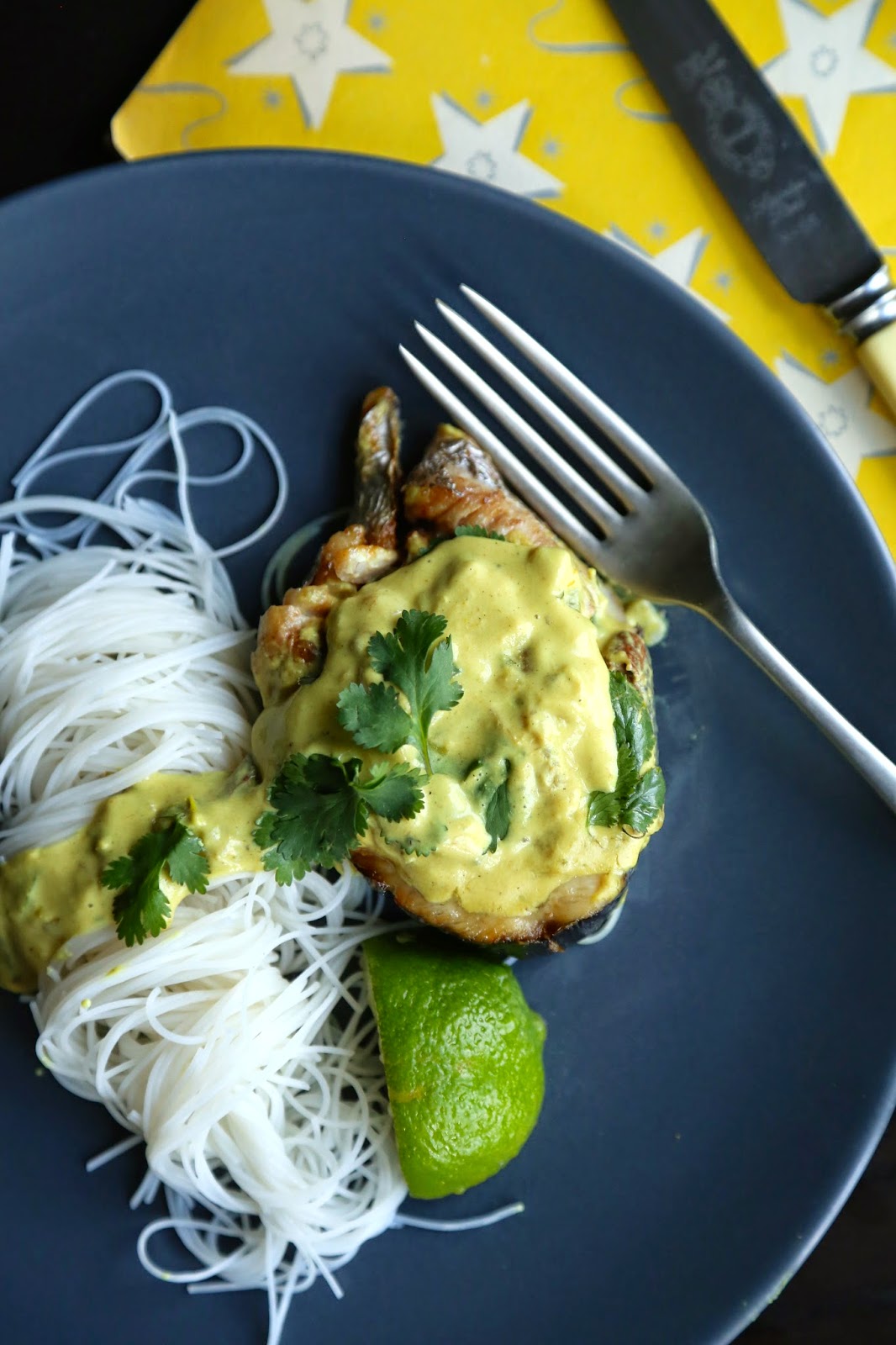 Kalla, 51, was
brought up in Sri Lanka and Malaysia. She’s suffered from high blood pressure
since her early 20s, hence she has been on dialysis for four years in the
self-care section.
The renal diet means no nuts, no seafood, no
aubergines, all of which are extensively used in the Malaysian and Sri Lankan
food of her youth but Kalla occasionally has some as a treat when her
mother comes to visit. Asian fruit and vegetables are particularly high in
potassium.
String hoppers are a kind of steamed rice cake like idli. One requires a mould and a basket or pallet to steam them.
But for this recipe, we have used rice noodles or you could serve rice.
Kalla’s mother makes her own chilli powder. She
grows her own chillies and takes it to a local miller, where they ground spice
mixtures in small batches.
Note: liquid is obviously a problem with the
renal diet so only a small amount of the Kiri Hodi gravy must be eaten.
Generally a dry curry is best for those on dialysis.
This meal is eaten for breakfast or dinner.
Hoppers are one of the most ancient foods, dating from the 1st century.
Kiri Hodi with String Hoppers or rice noodles
Serves 2
String Hoppers
225g of plain flour or  white or roasted red rice flour
(available at Indian shops)
A pinch of salt
335ml of hot water
Kiri Hodi
400g of King Fish
1/2 a red onion, thinly sliced
1 small green chilli, deseeded, sliced thinly
3 -4 fresh curry leaves
2 garlic cloves, minced
1/2 tsp ground turmeric
1 cinnamon stick, whole, removed from sauce before serving
1/4 tsp of fenugreek seeds, dry roasted
50ml coconut milk
200ml of soy milk
Juice of half a lime
Garnish: fresh coriander
String hopper method:
Prepare a double boiler/ bain marie steamer
with hot water just enough water to rest below where you will place the string
hopper baskets.
Mix the flour and salt in a bowl then add the
hot water, mixing it together. Do the ‘ball’ test. If you can press the crumbly
dough into a large ball then you have the right texture. It shouldn’t be too
wet however. It is important to knead the dough while it is hot. If the dough
is too hot for your hands then empty the dough into a ziplock bag and knead it
with a tea towel.
Knead the dough until it is fully mixed with no
lumps.
Using a string hopper mould, place the dough
into the gadget and squeeze out the noodles onto the string hopper pallet or
basket, using a circular motion.
Place the pallets of noodles into the double
boiler and steam the noodles over the boiling water for 5 to 10 minutes.
Kiri Hodi method:
Put all the ingredients except for the lime
juice in a saucepan on a medium heat and let it cook for about 5 minutes. Then
add the lime and a pinch of salt, bring up to a boil then switch off. Keep
stirring and serve with string hoppers.
Vermicelli Rice Noodles:
Soak the rice noodles in boiling water for 15 minutes, then serve.